PAYCHECKS STOP: Companies are entering survival mode, which means tens of thousands of people are losing weekly paychecks. Governments are pushing billions of dollars into programs to stop the bloodletting, but job cuts keep coming.

— Tesla is furloughing most of its factory workers and temporarily implementing pay cuts to help manage costs. Furloughed employees won't be paid, but health benefits will continue. The company anticipates a return to work on May 4, according to an email from Valerie Workman, head of HR for North America. Pay cuts are expected to be in place until the end of the second quarter. 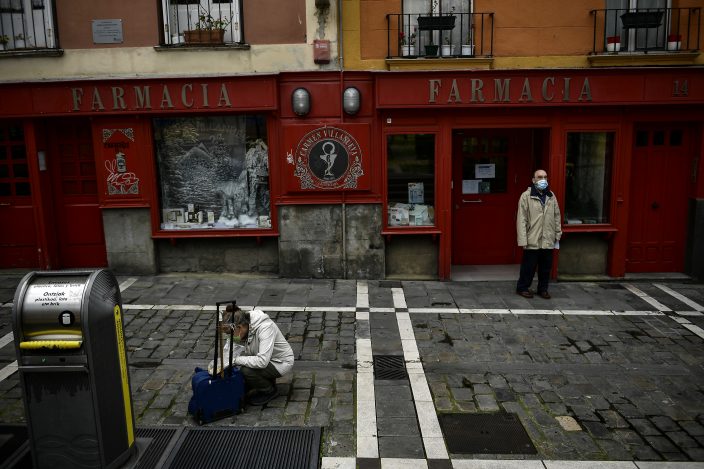 A man stands outside of a pharmacy wearing face protection during confinement to prevent the spread of coronavirus COVID-19, in Pamplona, northern Spain, Wednesday, April 8, 2020. COVID-19 causes mild or moderate symptoms for most people, but for some, especially older adults and people with existing health problems, it can cause more severe illness or death. (AP PhotoAlvaro Barrientos)

— Hong Kong announced a third round of relief measures worth 137.5 billion Hong Kong dollars ($18 billion) on Wednesday, aimed largely at preventing further layoffs in the city as unemployment hits a nine-year high. The latest round of measures are targeted largely at businesses in the city. The HK $80 billion employment support program will send a subsidy of 50% of employees’ wages for a period of six months, capped at HK$9,000 a month. Employers who receive funds must pledge not to lay off employees.

HOUSING WOES: There were already signs of some weakness in the housing market before the pandemic, and new data shows a significant drop as open houses and other activities. New data suggests suggests a much more dire situation, at least in the short term.

— Mortgage applications nationwide dropped 17.9% in one week, according to a Mortgage Bankers Association survey released Wednesday. Purchase applications, which hint at future activity, slid 12% in a week, and a whopping 33% from the same week last year. It's far worse in regions where COVID-19 is raging. Compared with last year, purchase applications tumbled 38% in Washington state and 31.3% in New York which recorded 731 new coronavirus deaths, the biggest one-day jump yet. California reported a 15.9% drop in applications. 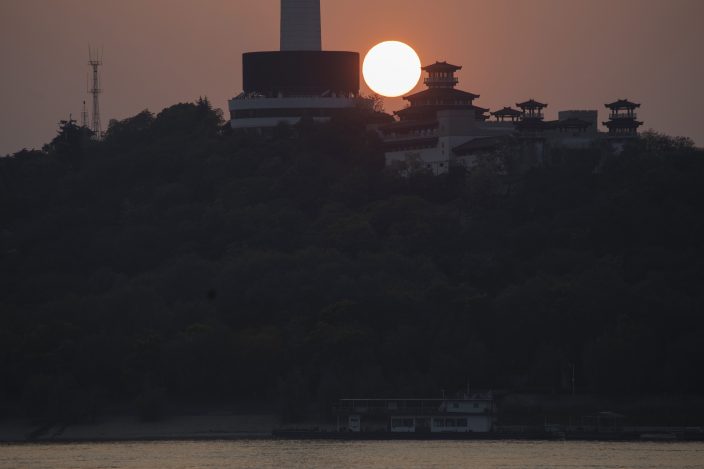 The sun sets over the television tower along the Yangtze River in Wuhan in central China's Hubei province on Wednesday, April 8, 2020. Streets in the city of 11 million people were clogged with traffic and long lines formed at the airport, train and bus stations as thousands streamed out of the city to return to homes and jobs elsewhere. Yellow barriers that had blocked off some streets were gone, although the gates to residential compounds remained guarded. (AP PhotoNg Han Guan)

HEAVY INDUSTRY: Manufacturers have reconfigured factories floors to provide essential goods despite the lack of a coordinated response from Washington and clashes between President Donald Trump and some of the nation's largest producers.

— The U.S. will buy 30,000 desperately needed ventilators from General Motors for $489.4 million. GM is making the devices at cost. The Department of Health and Human Services will pay just over $16,300 each. The ventilators will go into the Strategic National Stockpile for distribution to where they are needed most, HHS said. GM will deliver 6,132 ventilators by June.

MACRO DEVASTATION: The global economy, already slowing before the outbreak, is attempting to blunt the worst of the economic damage. But a severe contraction is increasingly likely. 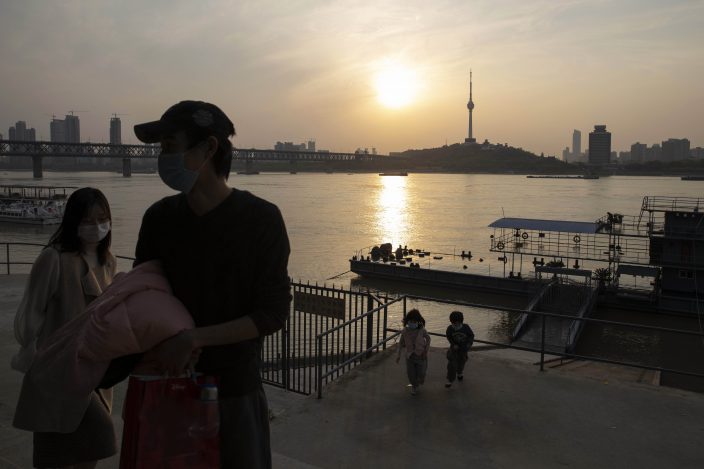 Residents walk along the Yangtze River on a ferry in Wuhan in central China's Hubei province on Wednesday, April 8, 2020. Streets in the city of 11 million people were clogged with traffic and long lines formed at the airport, train and bus stations as thousands streamed out of the city to return to homes and jobs elsewhere. Yellow barriers that had blocked off some streets were gone, although the gates to residential compounds remained guarded. (AP PhotoNg Han Guan)

— Japan’s economy is headed to a 25% contraction in the current quarter, even with the government's fiscal aid package, Goldman Sachs said Wednesday. The report by economists Naohiko Baba and Yuriko Tanaka said exports are expected to dive by 60% in the April-June period. The contraction for the world’s third largest economy would be a record, since gross domestic product began to be tracked in 1955, according to the report.

— The virus outbreak will cause a deep recession in Germany, shrinking the economy by 4.2% this year, leading German research institutes said Wednesday in their twice-annual report. The economists predict a swift rebound bringing growth of 5.8% in 2021.

MARKETS: Volatility has continued on Wall Street as updates on the pandemic change daily. 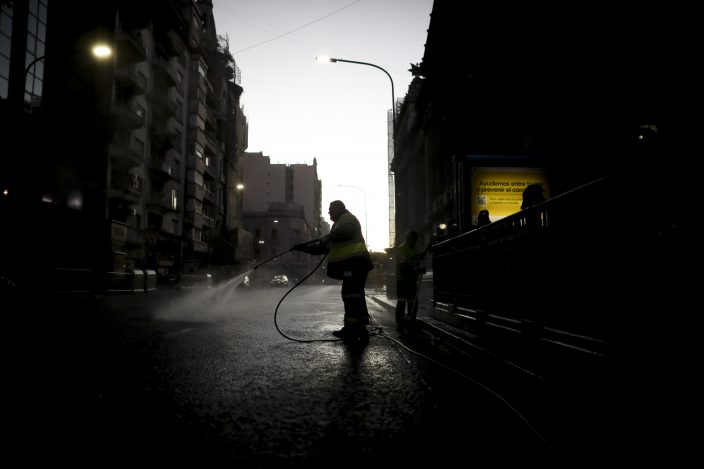 A worker disinfects the street outside Congress during a government-ordered lockdown to curb the spread of the new coronavirus in Buenos Aires, Argentina, Wednesday, April 8, 2020. (AP PhotoNatacha Pisarenko)

— Global shares mostly fell Wednesday amid uncertainty over the coronavirus outbreak, which continues to claim more lives around the world. U.S. shares were set to be little changed with the futures for the Dow industrials and the S&P 500 down 0.1%.

Hints of an economic reawakening amid mass, civic unrest

Transportation sector is bleeding jobs, more cuts on the way