While the world wrestles with the coronavirus pandemic, the three biggest U.S.-based sports leagues currently affected by the crisis are trying to figure out if, how and where games can be safely played again this year.

The NBA, NHL and Major League Baseball have some similar constraints: Public and player health are the most pressing issues and any decisions would have to come with widespread federal, state and local support. But there are also individual challenges for each league, which have unique schedules and playing arrangements that could affect logistics.

All three have discussed the possibility of essentially quarantining their players in cities for long periods to play games in a safe environment. 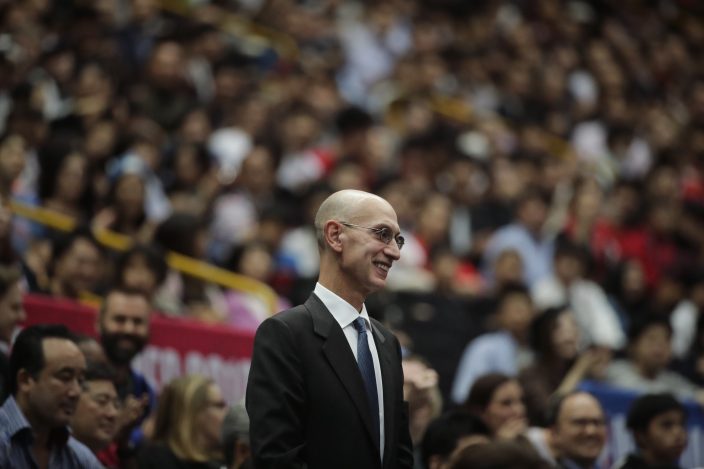 FILE - In this Oct. 8, 2019 file photo, NBA Commissioner Adam Silver is introduced during an NBA preseason basketball game between the Houston Rockets and the Toronto Raptors in Saitama, near Tokyo. Silver said in an interview Saturday, March 21, 2020 that the league is considering all options, best-case, worst-case and countless ideas in between, as it tries to come to grips with the coronavirus pandemic. (AP PhotoJae C. Hong, File)

Dr. Patrick Mularoni, who is the medical director of sports medicine at Johns Hopkins All Children’s Hospital, says it's possible, at least on paper.

“You’d have to completely isolate the players, staff, coaches, medical staff and likely food-service workers until 14 days. They’d all have to be willing to do that,” Mularoni said. "And the logistics of having that number of people not make a mistake is the difficulty there. But once you do that, if they are all together and working together, once they’re together, you should be fine because essentially what you created is an oasis where people who have proven that they do not have COVID can be.”

A Q&A prepared by some of AP's beat writers on where leagues are with their plans: 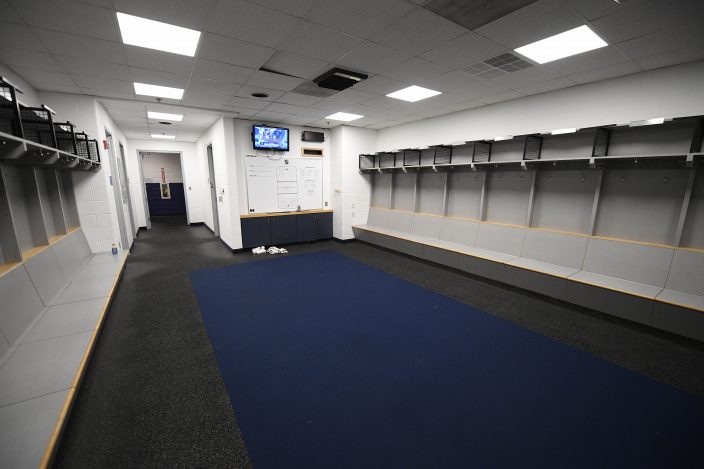 The empty visitors NHL hockey locker room is seen at Capital One Arena in Washington, Thursday, March 12, 2020. The Washington Capitals were to play the Detroit Red Wings later tonight. The NHL is following the NBA’s lead and suspending its season because of the coronavirus pandemic. NHL Commissioner Gary Bettman announced Thursday it is pausing its season, one day after the NBA suspended play after a player tested positive Wednesday for COVID-19.(AP PhotoNick Wass)

The NBA is looking at countless restart options, but a consistent theme throughout them calls for a training camp of at least two weeks for teams to get back into some sort of basketball shape. It would seem likely that teams would be quarantined at that time. No decision has been made about whether to resume some of the regular season or go right into the playoffs, and NBA Commissioner Adam Silver has said his league won’t decide anything definitively until at least May.

The idea of having one or two sites for games has been discussed, with Las Vegas and Los Angeles among them. The league has explored several possible sites, for preparation purposes, but has not entered into any concrete deals anyplace.

Almost certainly not, at least not at first, unless social distancing guidelines are lifted and public health officials say it is safe.

Q: Could they shorten the playoffs?

Absolutely. The best-of-seven format could be abandoned for a best-of-five or possibly less, though the NBA seems adamant at this point that -- if the season is going to resume -- it wants as legitimate a champion as possible.

Q: What other precautions would the NBA take?

The ball itself could be a major issue. NBA players sweat, and sweat a lot. That sweat gets on the floor, gets on other players, but the one thing in the game that everyone is touching is the same ball.

A: The NHL could target a late June or early July resumption of the regular season or beginning of the playoffs. League officials, coaches, general managers and players expect at least a two week re-training camp before resuming play. If the NHL goes directly to playoffs, either 16 or 24 of the 31 teams would likely be involved.

A: The NHL would like to use home arenas but is also considering hundreds of places to hold games at neutral sites, if need be.

A: It would take CDC and Public Health Canada clearance for large gatherings for fans to be allowed.

Q: What would be among the upsides in resuming play?

A: The playoffs could be the most competitive, with teams icing nearly complete rosters, given most players dealing with injuries will have had time to heal. NHL’s two key broadcast partners, NBC and SportsNet/CBC, have a huge hole to fill in their broadcast schedules with the Summer Olympics being postponed.

Q: How late could hockey be played?

A: Potentially into September. NHL officials are focused on staging a full 82-game 2020-21 season that could start as late as mid-November with the Stanley Cup awarded in late June. At least a month’s break would be required to allow for the draft and a free-agency period, and to provide players a chance to rest.

Games likely would start about three weeks after teams return to training. Teams and players have looked at the end of the 1994-95 strike as a possible model. Teams accepted the players’ unconditional offer to return to work on April 2, which was the original start of the season, and opening day was pushed to April 25.

MLB’s first choice would be to play in regular-season ballparks. Uncertain whether that will be possible, teams and the players’ association have discussed possibly basing all 30 teams in the Phoenix area, where they would be sequestered for an indeterminate time. There would have to be agreement on economic and logistical issues, and medical and government approvals.

At regular-season ballparks, the decision likely would be a city-to-city determination, made by local and state governments. At spring training ballparks in Arizona, there likely would not be any fans and games would be played for television, streaming and radio audiences.

Q: How long of a season is needed for it to be considered legitimate?

Q: How would the season change?

A: Players and teams want to play as many games as possible, which would increase revenue. Look for more games per week and more doubleheaders.

The Major League Soccer Players As ...