Apollo 13′s astronauts never gave a thought to their mission number as they blasted off for the moon 50 years ago. Even when their oxygen tank ruptured two days later — on April 13.

Jim Lovell and Fred Haise insist they’re not superstitious. They even use 13 in their email addresses.

As mission commander Lovell sees it, he's incredibly lucky. Not only did he survive NASA’s most harrowing moonshot, he’s around to mark its golden anniversary. 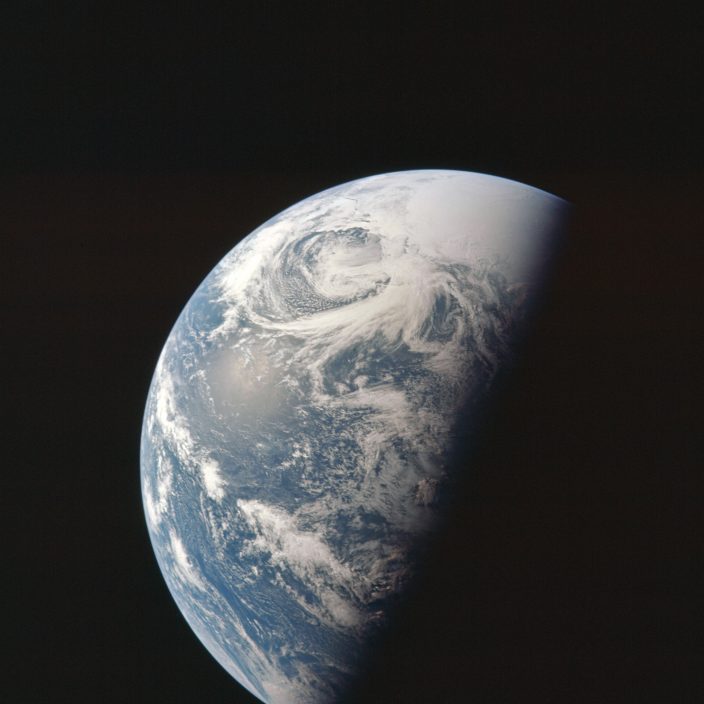 This April 1970 photo made available by NASA shows the Earth as the Apollo 13 mission heads towards the moon. (NASA via AP)

“I’m still alive. As long as I can keep breathing, I’m good,” Lovell, 92, said in an interview with The Associated Press from his Lake Forest, Illinois, home.

Lovell calls it “a miraculous recovery.” 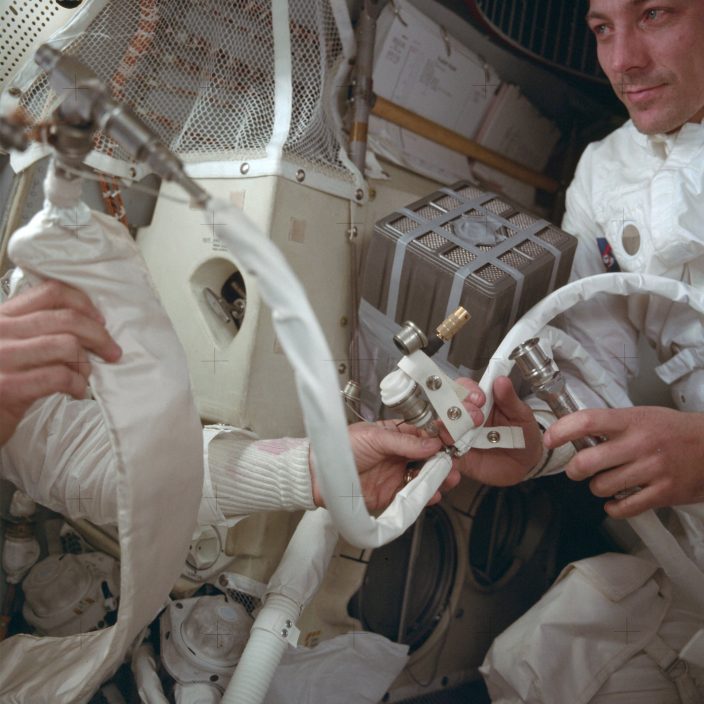 In this April 1970 photo provided by NASA, Apollo 13 command module pilot John Swigert helps to hook up a lithium hydroxide canister in the lunar module, in an effort to get rid of carbon dioxide in the cabin as the spacecraft attempts to return to Earth. The explosion of an oxygen tank in the service module forced the three-man crew to rely on the lunar module as a "lifeboat." (NASA via AP)

Haise, like so many others, regards it as NASA’s most successful failure.

“It was a great mission," Haise, 86, said. It showed "what can be done if people use their minds and a little ingenuity.”

As the lunar module pilot, Haise would have become the sixth man to walk on the moon, following Lovell onto the dusty gray surface. The oxygen tank explosion robbed them of the moon landing, which would have been NASA's third, nine months after Apollo 11's Neil Armstrong and Buzz Aldrin took humanity's first footsteps on the moon. 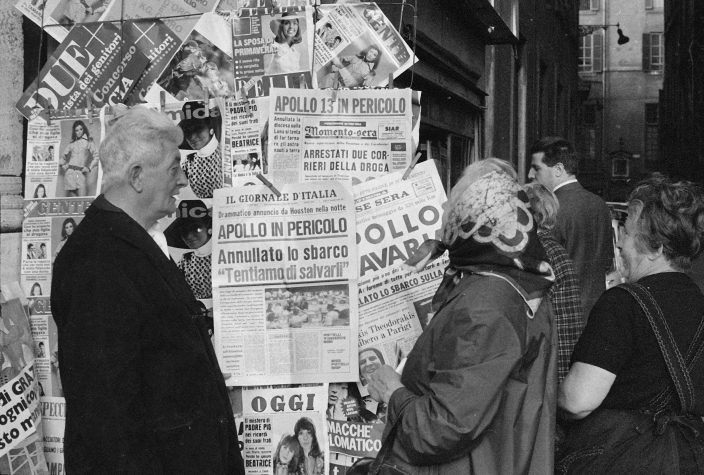 FILE - In this April 14, 1970 file photo, people in Rome look at newspapers headlining the trouble that developed aboard the U.S.'s Apollo 13 mission which led to the cancellation of the attempt to land on the moon. (AP Photo)

Now the coronavirus pandemic has robbed them of their anniversary celebrations. Festivities are on hold, including at Kennedy Space Center in Florida, where the mission began on April 11, 1970, a Saturday just like this year.

That won't stop Haise, who still lives in Houston, from marking what he calls "boom day” next Monday, as he does every April 13.

Lovell, Haise and Jack Swigert, a last-minute fill-in who died in 1982, were almost to the moon when they heard a bang and felt a shudder. One of two oxygen tanks had burst in the spacecraft's service module. 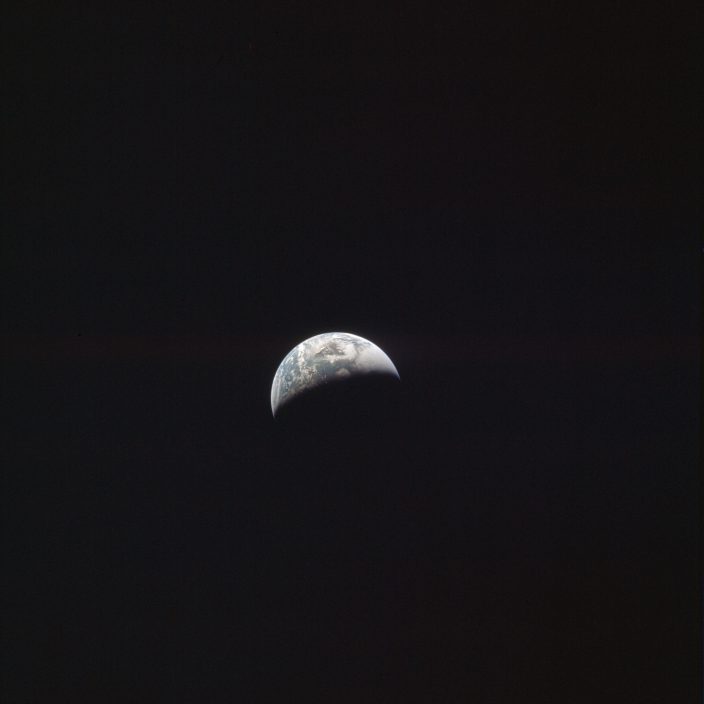 This April 1970 photo made available by NASA shows the Earth as the Apollo 13 crew traveled towards the moon. (NASA via AP)

The tense words that followed are the stuff of space — and movie — fame.

“This is Houston. Say again, please.” 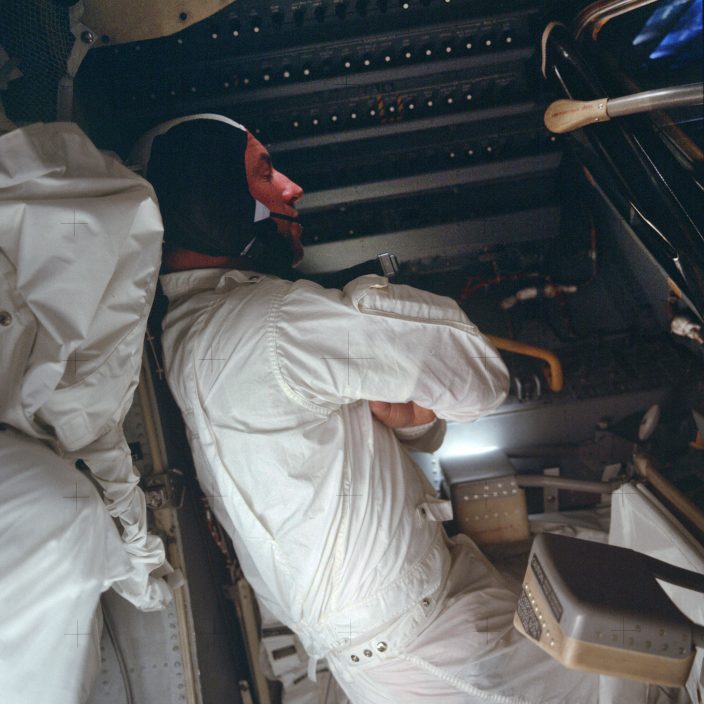 This April 1970 photo made available by NASA shows astronaut Jim Lovell during the Apollo 13 mission. (NASA via AP)

“Houston, we’ve had a problem,” Lovell cut in.

As Lovell peered out the window and saw oxygen escaping into the black void, he knew his moon landing was also slipping away. He shoved all emotions aside. 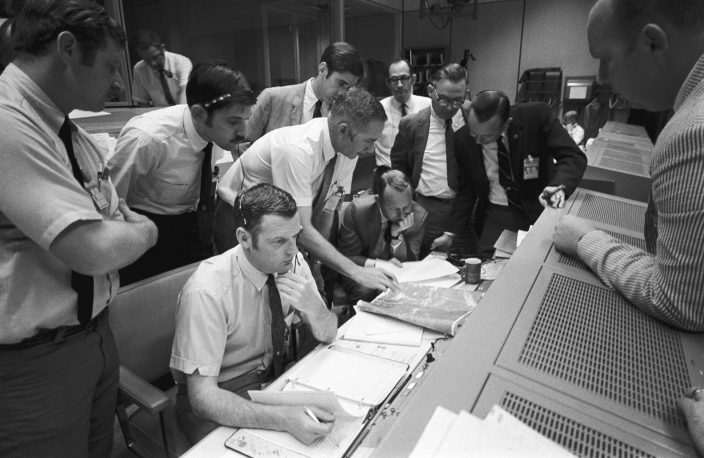 In this April 15, 1970 photo made available by NASA, a group of flight controllers gather around the console of Glenn S. Lunney, foreground seated, Shift 4 flight director, in the Mission Operations Control Room (MOCR) of Mission Control Center (MCC) in Houston. Their attention is drawn to a weather map of the proposed landing site in the Pacific Ocean. At this point, the Apollo 13 lunar landing mission had been canceled, and the problem-plagued Apollo 13 crew members were in trans-Earth trajectory attempting to bring their crippled spacecraft back home. (NASA via AP)

“The explosion could not have happened at a better time,” Lovell said. 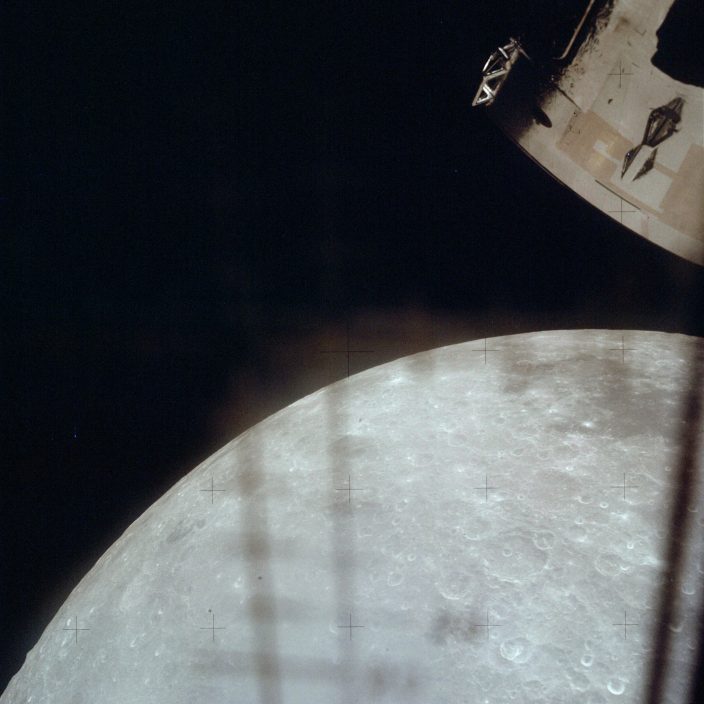 This April 1970 photo made available by NASA shows the moon through a window on the lunar module as the Apollo 13 crew heads back towards the Earth. (NASA via AP)

Much earlier, he said, and the astronauts wouldn’t have had enough electrical power to make it around the moon and slingshot back to Earth for a splashdown. A blast in lunar orbit or, worse still, while Lovell and Haise were on the surface, “that would be the end of it.”

“I think we had some divine help in this flight,” Lovell said.

The aborted mission went from being so humdrum that none of the major TV networks broadcast the astronauts’ show-and-tell minutes before the explosion, to a life-and-death drama gripping the entire world. 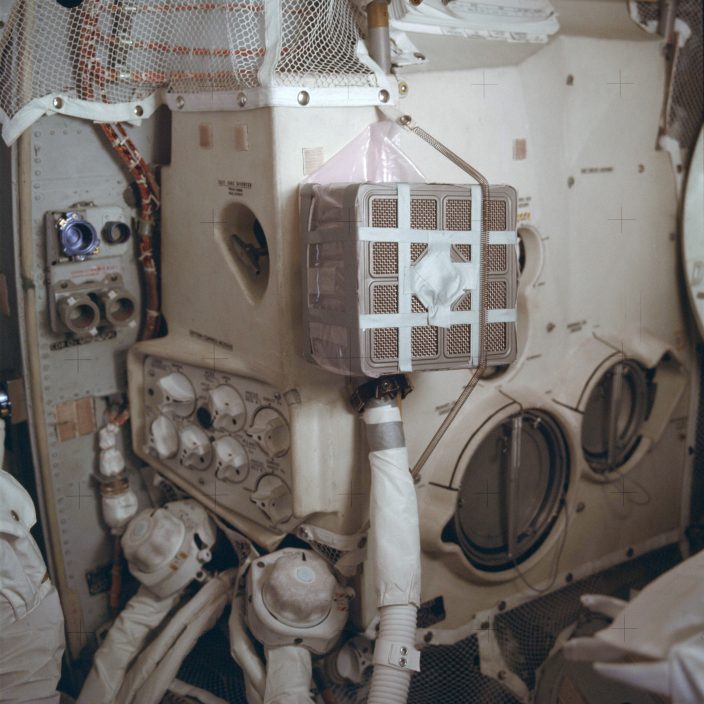 This April 1970 photo made available by NASA shows the interior of the Apollo 13 lunar module with the "mail box," an ad hoc device which the crew assembled while in space to remove carbon dioxide from the air. It was designed and tested on the ground in Houston. Because of the explosion of one of the oxygen tanks in the service module, the three men had to use the lunar module as a "lifeboat" on their way back to Earth. (NASA via AP)

As flight director Gene Kranz and his team in Houston raced to come up with a rescue plan, the astronauts kept their cool. It was Lovell’s fourth spaceflight - his second to the moon - and the first and only one for Haise and Swigert.

Dark thoughts “always raced through our minds, but silently. We didn’t talk about that,” Lovell said.

Added Haise: “We never hit the point where there was nothing left to do. So, no, we never got to a point where we said, ‘Well, we’re going to die.’” 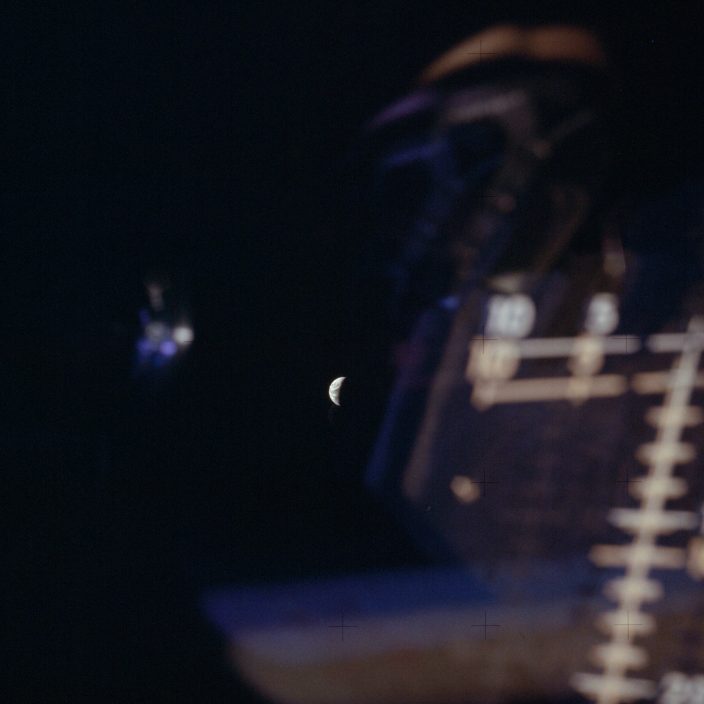 In this April 1970 photo made available by NASA, the Earth is seen though a window on the lunar module as the Apollo 13 crew heads towards home. (NASA via AP)

The White House, less confident, demanded odds. Kranz refused, leaving it to others to put the crew’s chances at 50-50. In his mind, there was no doubt, no room for failure — only success.

For the record, Kranz never uttered “failure is not an option.” The line is pure Hollywood, created for the 1995 movie “Apollo 13” starring Ed Harris as Kranz and Tom Hanks as Lovell. 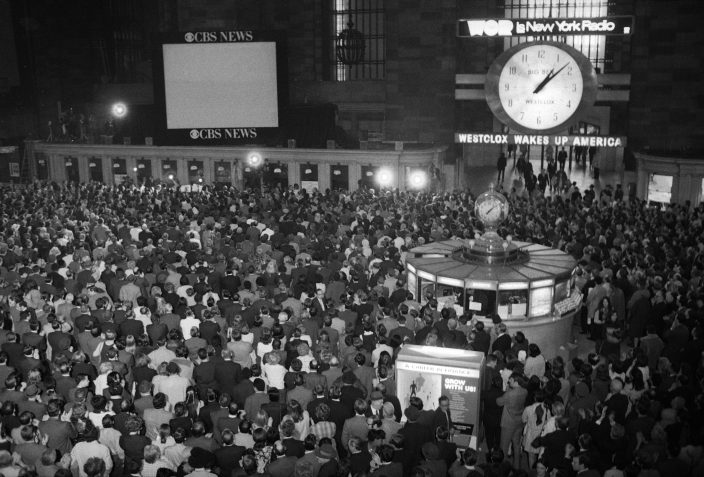 The flight controllers went into crisis mode. They immediately ordered the command module Odyssey shut down to conserve what little power remained, and the astronauts to move into the lunar module Aquarius, now a lifeboat.

One of the low points, Lovell said, was realizing they'd be cramped together in the lander.

“It was designed for two people for two days. We were three people for four days.” 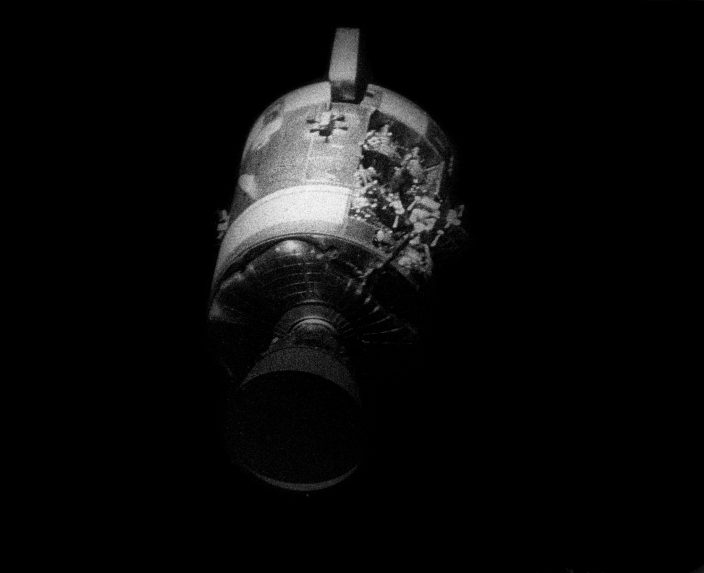 The carbon dioxide overload, from breathing, threatened to kill them.

Engineers scrambled to figure out how to convert the square air-purifying canisters in the dead capsule into round ones that would fit in their temporary home.

Their outside-the-box, seat-of-the-pants solution, using spacecraft scraps, worked. But it was so damp and cold that the astronauts couldn’t sleep. Condensation covered the walls and windows, and the temperature was close to freezing. 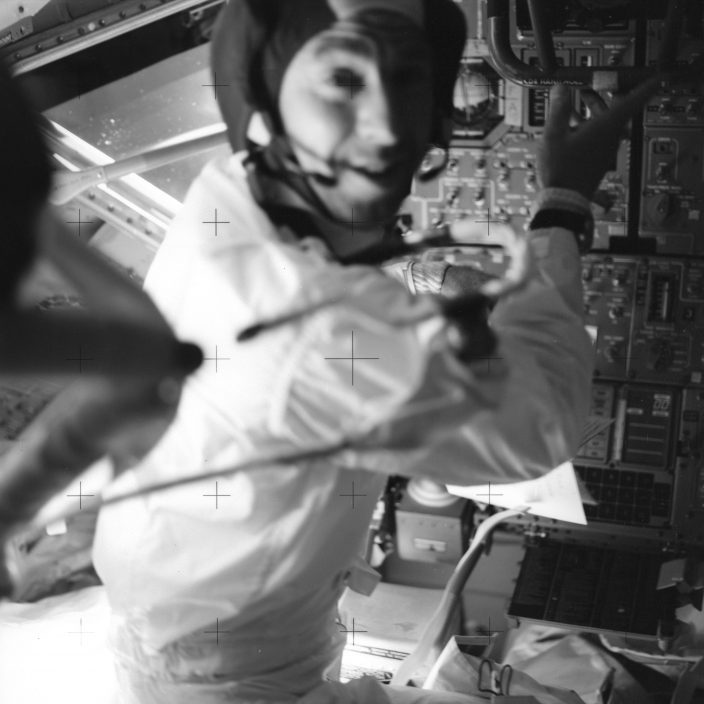 In this April 17, 1970 photo made available by NASA, astronaut Jim Lovell, inside the Apollo 13 lunar module, prepares it for jettison before returning to the command module for splashdown in the Pacific Ocean. (NASA via AP)

Dehydrated and feverish, Haise had the roughest time during the six-day ordeal. Despite the sky-high stress, Haise recalls no cross words among the three test pilots. Even Swigert fit in, despite joining the crew a scant three days before liftoff. He replaced command module pilot Ken Mattingly, who with his crewmates had been exposed to German measles, but unlike them didn't have immunity.

Rumors swirled that the astronauts had poison pills tucked away in case of a hopeless situation. Lovell dispelled that notion on page one of his 1994 autobiography, “Lost Moon,” the basis for the “Apollo 13″ film. 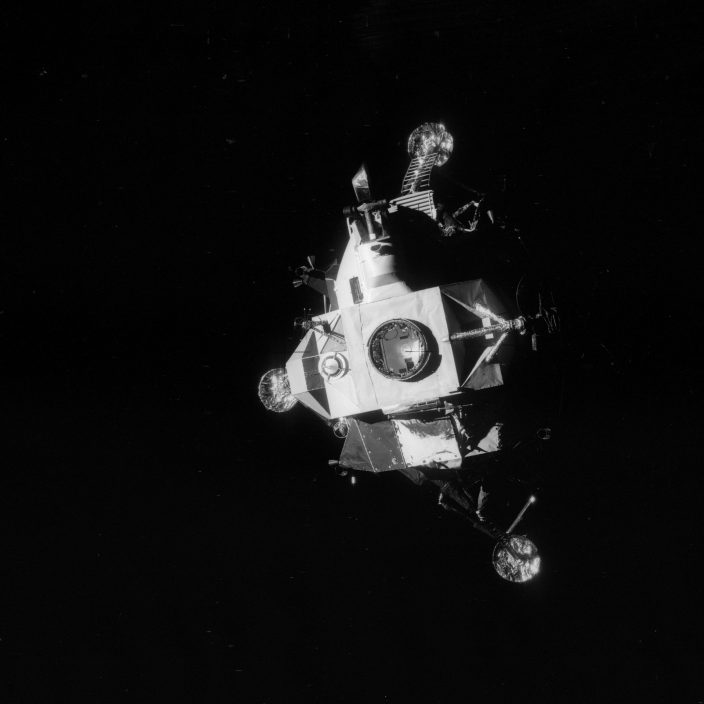 The astronauts managed to power up their command module, avoiding short circuits but creating a rainfall inside as the spacecraft decelerated in the atmosphere.

The communication blackout lasted 1 1/2 minutes longer than normal. Controllers grew alarmed. Finally, three billowing parachutes appeared above the Pacific. It was only then, Lovell said, that “we knew that we had it made.”

The astronauts had no idea how much their cosmic cliffhanger impacted the world until they reached Honolulu. President Richard Nixon was there to greet them. 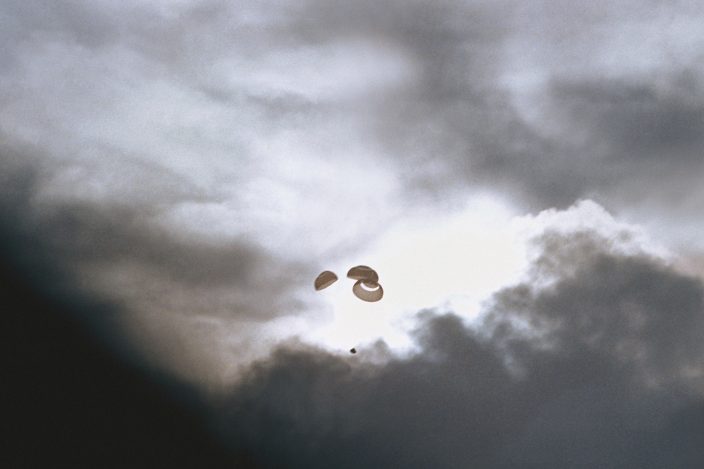 In this April 17, 1970 photo made available by NASA, the command module carrying the Apollo 13 crew parachutes to a splashdown in the Pacific Ocean. (NASA via AP)

“We never dreamed a billion people were following us on television and radio, and reading about us in banner headlines of every newspaper published,” Lovell noted in a NASA history.

The tank explosion later was linked to damage caused by electrical overheating in ground tests.

Apollo 13 “showed teamwork, camaraderie and what NASA was really made of,” said Columbia University’s Mike Massimino, a former shuttle astronaut. 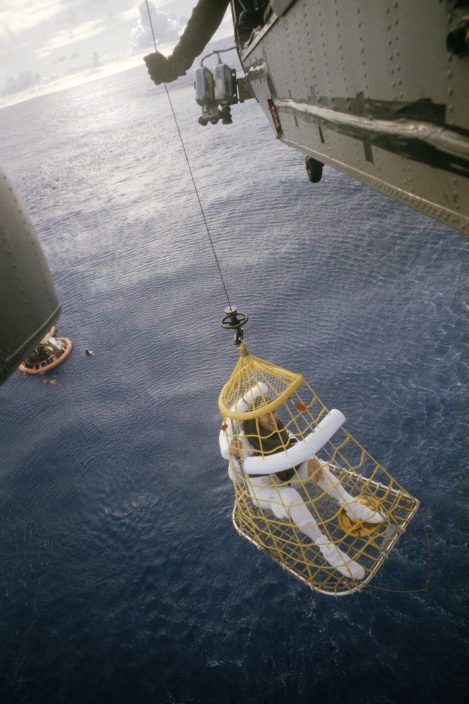 In this April 17, 1970 photo made available by NASA, astronaut Jim Lovell, commander, is hoisted aboard a helicopter from the USS Iwo Jima, after splashdown of the Apollo 13 command module in the Pacific Ocean. (NASA via AP)

In the decades since, Lovell and his wife, Marilyn, of nearly 68 years have discussed the what-ifs and might-have-beens.

“The outcome of everything is, naturally, that he’s alive,” she said, “and that we’ve had all these years.” 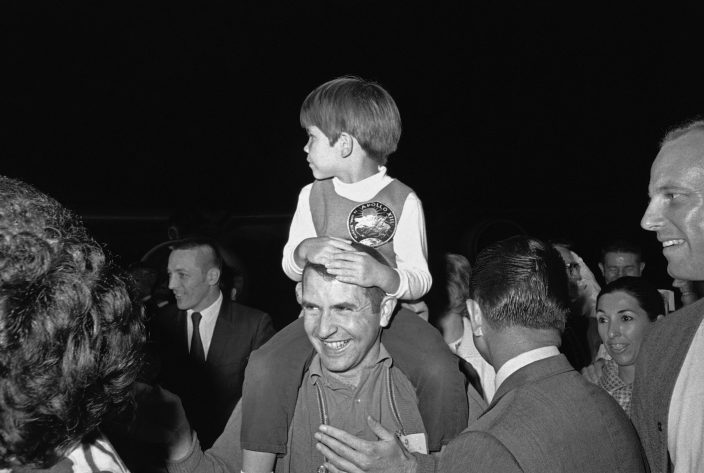 FILE - In this April 19, 1970 file photo, Apollo 13 astronaut Jim Lovell carries his son, Jeff, 4, on his shoulders as he arrived at Ellington Air Force Base in Houston. (AP Photo) 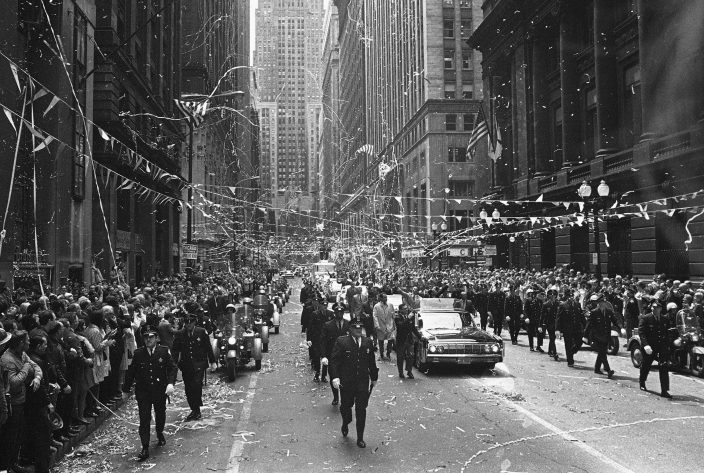 FILE - In this May 1, 1970 file photo, confetti falls from the skyscrapers in Chicago's financial district as Apollo 13 astronauts John Swigert and Jim Lovell ride in a motorcade during a parade in their honor. (AP Photo) 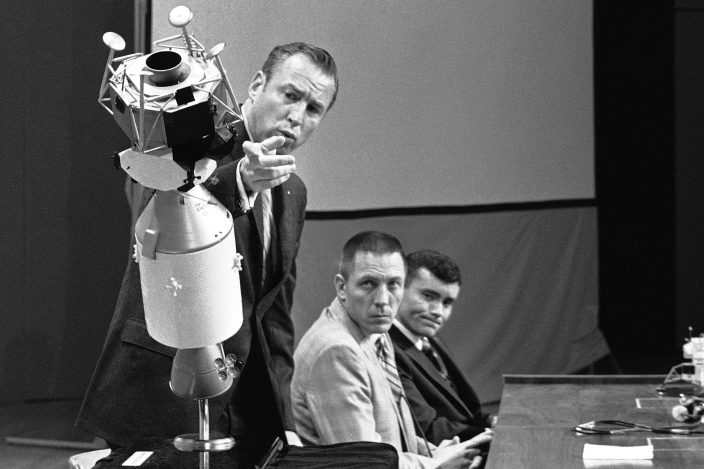 FILE - In this April 21, 1970 file photo, Apollo 13 commander Jim Lovell uses a scale model during a televised news conference at the Manned Spacecraft Center, Houston to explain how the crew managed to survive after the explosion that damaged the service module during their mission to the moon. At center is John Swigert, command module pilot, and at right is Fred Haise, lunar module pilot. (AP Photo) 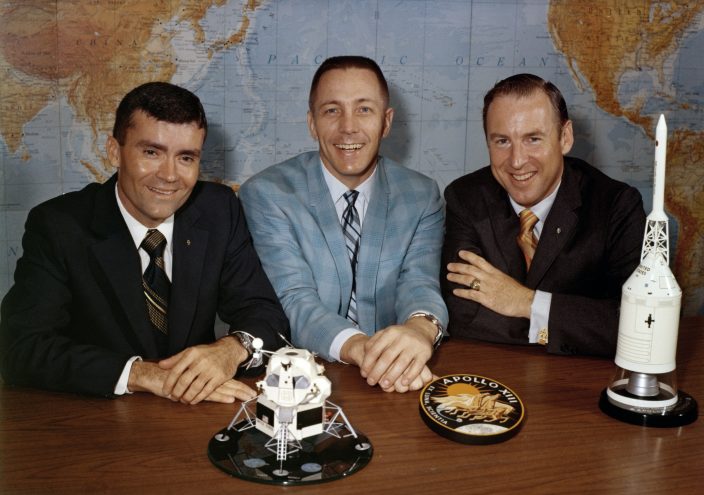 In this April 10, 1970 photo made available by NASA, Apollo 13 astronauts, from left, Fred Haise, Jack Swigert and Jim Lovell gather for a photo on the day before launch. (NASA via AP)

Two police officers have been fire ...