A survey of 15 golf writers voted on the top best Masters. They are being republished this week because the Masters has been postponed due to the coronavirus pandemic. The 1975 Masters was voted No. 4. The following story moved on April 13, 1975. 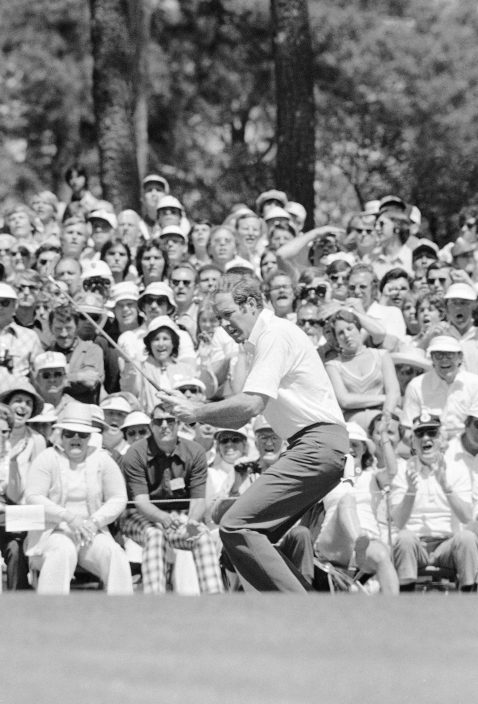 FILE - In this April 13, 1975, file photo, Tom Weiskopf birdies the third hole at Augusta National during the fourth round of play in the Masters golf tournament. In what was voted the fourth-best Masters, it was fourth runner-up finish for Weiskopf, a Masters record for those who never won.(AP PhotoBob Daugherty, File)

There Jack Nicklaus stood on the 16th hole — Augusta's par three Red Bud hole — looking at a 40-foot sidehill putt that must have looked more like a mile.

His ears were still ringing from the cheers of thousands lining the long par five No. 15 just behind him where tall Tom Weiskopf had just knocked home a 12-footer for a birdie that sent him into the lead of the 39th Masters Golf Tournament with three holes to play.

“Sometimes you get a feeling about these things,” Nicklaus said afterward. "I thought I could make the putt. I decided to use a different style. I decided to hand-stroke the putt rather than hit it. 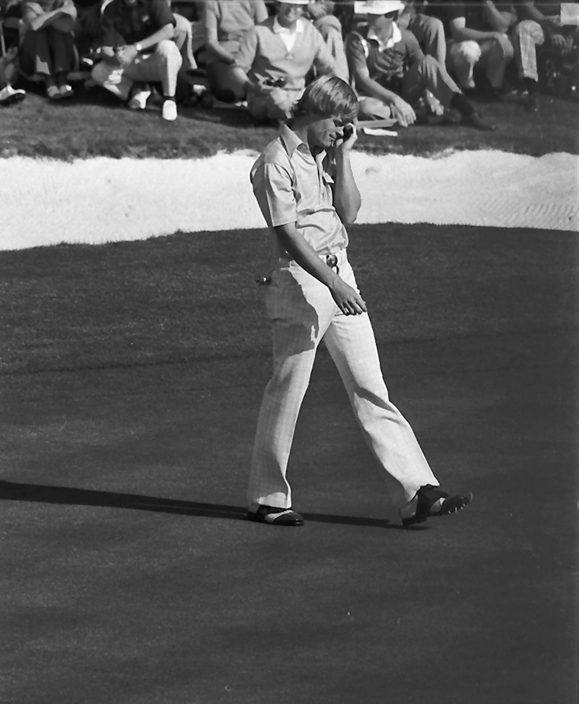 FILE - In this April 13, 1975 file photo, Johnny Miller reacts after a missed birdie putt in the final round of the Masters golf tournament in Augusta, Ga. Miller shot 65-66 on the weekend and finished second in what was voted the fourth-best Masters. (AP PhotoFile)

“I knew Tommy, watching from the tee, would have a hard time playing the 16th after watching me make a two. So I struck it and it rolled in. That, for me, was the tournament.”

A momentarily shaken Weiskopf proceeded to leave his five-iron tee shot 80 feet short on No. 16 and watch his approach putt roll to the left, still 18 feet away. He bogeyed and there was a two-shot shift in those dying moments of one of the greatest golf tournaments ever played.

“I got the two shots back that I had lost on the 14th,” Nicklaus said.

Thousands pouring over Augusta's floral acres and millions viewing on television watched the battle go down to the final hole — a no-quarter, no-choke shootout involving the three finest golfers of the age.

Nicklaus emerged the winner, an unprecedented fifth Masters, his 15th major crown, the first leg on the only honor that still evades him — the elusive Grand Slam, encompassing the Masters, U.S. and British Opens and the PGA, all in a single year.

“Sure, I want it,” Nicklaus said. “It's a possibility but not a probability.”

Weiskopf, a tall princely man with a swing of graceful power, and young, tow-headed Johnny Miller, at 27 rated by many as Nicklaus' heir apparent, were just one shot behind at 277, both barely missing birdie putts on the final green that would have tied them for the championship.

Then Jack added a comment echoed by almost everyone who witnessed the pulse-pounding climax of a tournament people will be discussing for years.

“I don't think I have ever been involved in a more exciting day of golf,” Jack said. “It was a wonderful happening for America. Honestly, it hits me right here.”

He pounded a fist against the pocket of his green jacket.

The magnificence of Nicklaus' historic victory could not dim the luster of performances by the men who had to be content with the leavings.

The 27-year-old Miller, Pro Golfer of the Year in 1974 and winner of 11 tour tournaments in the past 11 1/2 months, came from 11 shots back after the first two rounds to miss carrying Nicklaus into a playoff by a whisker.

Off to a shocking opening round 75, the string-bean Californian with the fierce competitive spirit fired successive rounds of 71-65-66, setting a record of 202 for the last 54 holes and 131 for the last 36.

“I am no Jack Nicklaus, but I'm not bad,” he said later. “I proved to myself and to everybody else that I can win other places than Phoenix and Tucson.” He won those two Arizona tournaments plus the Bob Hope Classic earlier this year.

Weiskopf, at 32 three years younger than Nicklaus, grew up in the shadow of the game's premier golfer in Columbus, Ohio, and has been endeavoring to keep an often explosive temperament from spoiling one of golf's finest rounded games.

His second-place finish marked the fourth time he has been runner-up in this invitation event, which like spring flowers seems to bring the whole game alive.

“I know one thing,” he vowed. “I will win this tournament one day, and my green coat will be tailor made.”

He made no effort to conceal his disappointment.

Hale Irwin, the reigning U.S. Open champion, also gave the last day fans a thrill by shooting an eight-under-par 64 — tying course records previously made by Lloyd Mangrum, Nicklaus and England's Maurice Bembridge. He finished with 282, tying Bobby Nichols, who had a 69. Former champion Billy Casper shot 76 for 283 and sixth money.

With Weiskopf leading the favored Nicklaus by a stroke, and Miller four shots off the 54-hole pace, the gallery was primed for fireworks but the result was more exciting than anyone could have envisioned.

“There probably has never been a major championship in which the great players performed so remarkably — without giving quarter — down to the final putt,” said Herbert Warren Wind, noted historian and author of the “History of American Golf” and numerous other books.

In the final pairing, Nicklaus was paired with young Tom Watson as the next to last twosome behind Weiskopf and Miller. Weiskopf came from six shots back to overtake the front-running Nicklaus after 54 holes and Miller, 11 strokes behind and written off as a contender, continued to sizzle.

The two Ohioans, Nicklaus and Weiskopf, went at each other stroke for stroke through the first 10 holes, the lead fluctuating with the determined, fast-walking Miller picking up ground.

After 10 holes, Nicklaus and Weiskopf were tied, 11 under par, with Miller only two shots back. No one else was a factor for the title. Then the contenders swung into what has been christened the “Amen Corner” — a group of holes at the far side of the course from the clubhouse where an abundance of water and fickle, swirling winds have been known to kill the spirit of the giants.

It is here, by Masters tradition, that championships are won and lost. There was no exception this time.

At the 11th, a formidable par four, Weiskopf dumped his second into the water and Miller, in one of this few miscues, three-putted, missing from two feet. Nicklaus now led Weiskopf by one and Miller by three.

Miller got a shot back with a birdie on the par five 13th, almost knocking the flagstick down after being in the trees twice. Nicklaus and Weiskopf parred.

Tension heightened at the 420-yard 14th. Nicklaus put his approach on the fringe, 40 feet from the cup, and putted to the other fringe 20 feet away, three-putting for a bogey five. Just behind him, Weiskopf birdied from six feet, a shift of two strokes.

Now Weiskopf was in the lead, 11 under, and Nicklaus was a shot back, with Miller two back — a dogfight. All three birdied the long 15th, Nicklaus hitting what he called “one of the finest one-iron shots I can remember.”

A wild cheer went up when Weiskopf sank a tough 12-foot putt for his birdie at the 15th. Jack was on the green at the 16th, looking at that 40-foot snake, which he promptly rammed home.

“It was a gutsy putt — it won the tournament,” said Miller, who proceeded to birdie the 17th and carry the three of them to the final hole a shot apart, Nicklaus leading by one.

Nicklaus unloaded a good drive and put his second on the green, 12 feet away — makeable for a birdie. Weiskopf and Miller came up in pursuit, with tremendous drives to the slight dogleg, uphill closing hole.

Jack missed his birdie putt by a couple of inches, and then moved over to the sidelines to await the last two men on the course. Miller put his approach to the green, 15 feet away. Weiskopf lashed the ball up to within eight feet.

Miller's putt slipped slightly past the cup to the left. “I played a 12 inch break and I should have played an 18-inch break,” he said. “You don't know what it is to putt for a big championship.”

Weiskopf measured his eight-footer carefully. He played for a break that never came.

“I saw Johnny's ball break and I played for the same break,” a disappointed Weiskopf said. “I hit it good. I hit it the way I wanted to. The ball didn't break. It's the break of the game. But there will be other days.”

The Latest on the death in Minneap ...