Blake Wheeler and the Winnipeg Jets would have been on the road last week, trying to make a final push for the playoffs had the National Hockey League season not been called off because of the pandemic.

Now the seven-time All-Star forward is home for dinner each night with his family.

And for the activities, all afternoon. And the teaching, policing and entertaining every morning with his wife, Sam; 7-year-old son, Louie; 4-year-old daughter, Leni; and 2-year-old son, Mase. 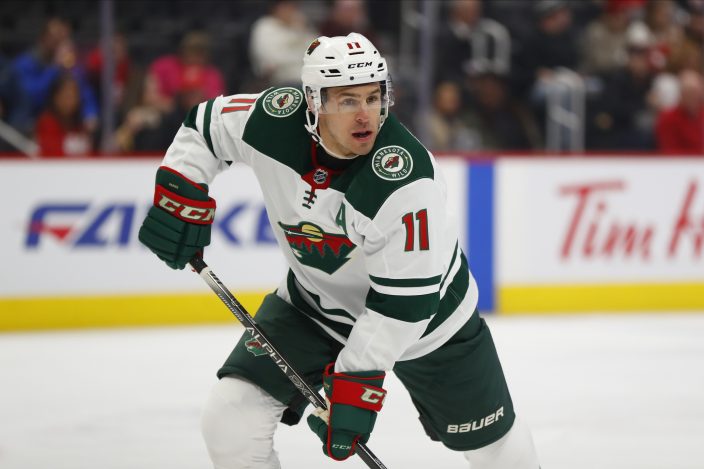 FILE - In this Feb. 27, 2020, file photo, Minnesota Wild left wing Zach Parise (11) plays against the Detroit Red Wings in the first period of an NHL hockey game in Detroit. For all the wealth, privilege and rewards elite sports can provide its participants, few vocations require more time away from loved ones. The NHL season has been called off because of the pandemic. “My 2-year-old gets up at about 5 in the morning,” Minnesota Wild forward Zach Parise said. “He naps from like 1 to 3, and that's our time to take a deep breath." Parise and his wife, Alisha, also have 6-year-old twins to look after.(AP PhotoPaul Sancya, File)

“Mase, since he’s been born, he doesn’t want anything to do with me, really, until like a month ago,” Wheeler said. “Now that I’m here all the time, he’s starting to realize that I am his dad.”

The 82-game NHL schedule, with half of those on the road, means Wheeler is absent from trick-or-treating and Thanksgiving turkey more often than not. He is normally away from home more than one-third of every night in any given year.

Thousands of athletes know that sting. For all the wealth, privilege and rewards elite sports can provide its participants, few vocations require more time away from loved ones. This is what they signed up for, but some parts of life can't be priced out.

“I appreciate the gift of time and being able to spend it with my family,” said Maryland women's basketball coach Brenda Frese, whose fourth-ranked Terrapins might well have been in New Orleans last week for the Final Four.

When the NCAA Tournament was canceled, Frese hunkered down with her husband, Mark, and their 12-year-old twin boys. She is a middle school tutor now, too.

For all parents, there is no denying homebound days have been draining.

“My 2-year-old gets up at about 5 in the morning,” Minnesota Wild forward Zach Parise said. “He naps from like 1 to 3, and that's our time to take a deep breath."

Parise and his wife, Alisha, also have 6-year-old twins to look after. He recalled falling asleep watching television at 8:30 one night — a similar tale to that of his Central Division rival.

“We get ’em all down by about 8 on a good night, and then there’s a half hour of just numbness,” Wheeler said.

St. Louis defenseman Alex Pietrangelo and his wife, Jayne, have 20-month-old triplets. Like many of his peers, Pietrangelo has been reminded anew how much there is to handle while dad is at the rink.

"There's not enough time in the day. I'm not even working right now, and I can’t even find enough time to do something for myself,” Pietrangelo said on a conference call as his kids were clamoring for more time outside.

Opportunity beckons, of course, in the gift that is presence.

"You don’t get these days back,” said University of Tennessee football coach Jeremy Pruitt, gratefully describing extra time with his infant daughter. He and his wife also have boys ages 4 and 2 at home.

With no Major League Baseball, Chicago White Sox shortstop Tim Anderson was home for his daughter's first birthday last week. Washington first baseman Ryan Zimmerman has tag-teamed nightly readings of “Charlie and the Chocolate Factory” with his 6-year-old daughter, to be followed by a viewing of the movie.

“It’s cool to see kids learn to do something and be proud of it and then really go after it,” Zimmerman said in a weekly diary he's keeping for The Associated Press. “Honestly, I probably wouldn’t have been able to do that with her if it wasn’t for this.”

“I can’t believe how many times I’ve jumped on a trampoline at 37 years old,” Pitino said.

The suspended NBA season prompted Minnesota Timberwolves executive Gersson Rosas to try yoga for the first time with his wife and 4-year-old twins. Milwaukee Bucks coach Mike Budenholzer, energized by the return from college of his 19-year-old daughter, has upped his knowledge of movies and shows from the major streaming services.

Tampa Bay Lightning defenseman Ryan McDonagh has relished the laughter from conversation with his 3-year-old daughter he otherwise would have missed on the NHL circuit. Scooter rides around the block have replaced the morning skate.

“She gets so excited every day to do that with me, now that we’ve done it for a couple of weeks in a row,” McDonagh said. “It’s fun to see the joy in their face. It really makes you love them even more.”

Merkel won't attend G7 summit in person if US goes ...

Chancellor Angela Merkel will not ...