Thomas Ravelli was talking about the coronavirus — what else? — when his thoughts turned to Sweden’s fairly relaxed attitude to a pandemic that has shut down much of the world.

“Young people here are still sitting outside drinking beer and having some fun. But I am really scared,” the 60-year-old Swedish soccer great said. “We have a different approach to the virus. Maybe we do the right thing, or maybe everyone else is doing the right thing. Nobody knows.”

If anyone knows a thing or two about being different, it’s Ravelli — as Sweden’s youngsters are about to find out. 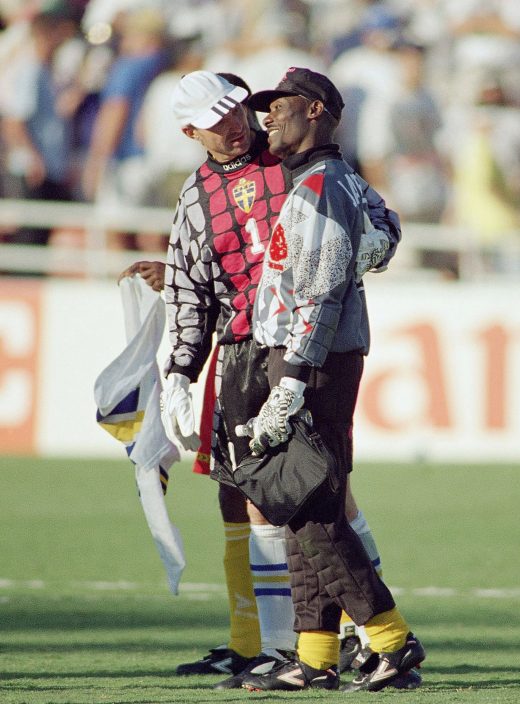 FILE - In this file photo dated Sunday, June 19, 1994, Goalkeeper Thomas Ravelli of Sweden, left, and Joseph-Antoine Bell of Cameroon hug each other as they walk out of the field after the 2-2 tie of the Sweden Vs Cameroon Group B first round match of the World Cup soccer championship at the Rose Bowl in Pasadena, USA. The extrovert Sweden goalkeeper Ravelli who helped give the Scandinavian nation one of its greatest sporting rushes when the Sweden team reached the semifinals of the 1994 World Cup in the United States, and Sweden's national TV broadcaster plans to replay the team's games over the coming weeks in an attempt to unite the nation during the coronavirus pandemic. (AP PhotoLois Bernstein, File)

In an attempt to “strengthen and unite” the country in these uncertain times, Swedish broadcaster SVT has decided to replay the national team’s games from the 1994 World Cup in the United States, when Sweden reached the semifinals for the only time since finishing runner-up in 1958.

It’ll revive great memories for the older generation — the goals of Thomas Brolin and Martin Dahlin, those dreadlocks of a young Henrik Larsson, that eccentricity of Ravelli — and no doubt lead the younger generation into a voyage of discovery.

“It might let the young people know what that fuss was about 26 years ago,” Ravelli said in a phone interview with The Associated Press.

The goalkeeper was undoubtedly the biggest character — and maybe the most famous member — of the “Class of ’94,” whose place in Swedish sporting lore is locked down.

Easily recognizable because of his receding hairline, his vibrant uniform and his extrovert nature, Ravelli fitted perfectly the stereotype of a so-called “wacky goalkeeper” that was entrenched in soccer before the sport became such big business and 'keepers got more serious and technically proficient.

Ravelli’s maverick nature shouldn’t cloud his abilities as a goalkeeper, though, in particular his shot-stopping and his capacity to come out and collect crosses — like his boyhood idol, Sepp Maier.

In what would define his career, Ravelli — 34 years old at the time — saved two kicks in the penalty shootout against Romania in the quarterfinal match in front of more than 83,000 spectators at Stanford Stadium outside San Francisco, advancing Sweden to a meeting with Brazil in the semifinals. Despite more excellence from Ravelli, Sweden lost to the eventual champions 1-0. But the team won the third-place playoff against Bulgaria and returned to Stockholm to a heroes’ welcome.

“Before the World Cup, I was questioned as a goalkeeper. They thought I was too old, wasn’t good enough," Ravelli recalled. "The press were a little anxious about my capacities. I started the World Cup with a knife on my throat.

“It was my last chance to show the Swedish people, and the soccer community, that I was a good goalkeeper.”

As the son of Austrian immigrants and having the type of outlandish character that was at odds with typical Swedish introversion, Ravelli — who was the kind of joker who would cut holes in teammates’ underwear in the locker room — and Sweden weren’t natural bedfellows.

“But after the World Cup,” he said, laughing “everyone loved me.”

Ravelli, who now lives in Gothenburg, was an interesting character in other ways, too. In the early part of his career, he supplemented his soccer income by working for a company that sold technical products like coal and wire brushes to nuclear power plants.

“We only trained four times a week, so in the afternoons we’d work,” he said.

Since retiring in 1999, he has been giving motivational speeches to firms, worked as a TV commentator and, for the last five or six years, run a clothing company with his twin brother selling sportswear to schools and clubs. He appeared on Swedish reality TV show “Let’s Dance” last year.

But to most Swedes, Ravelli will always be that crazy goalkeeper who helped give the nation one of its greatest sporting rushes a quarter of a century ago.

“Watching that over again is a way to keep us together in these times,” Ravelli said, “and maybe gives us something else to think about.”