The Russian sports minister says it’s time for international authorities to “turn a new page” and forget the country’s Olympic doping ban because of the coronavirus pandemic.

The World Anti-Doping Agency barred Russia from the Olympics for four years after ruling last year that doping data from a Moscow laboratory had been manipulated. The Court of Arbitration for Sport is to rule on whether the ban is valid but hearings have been delayed because of the health crisis. 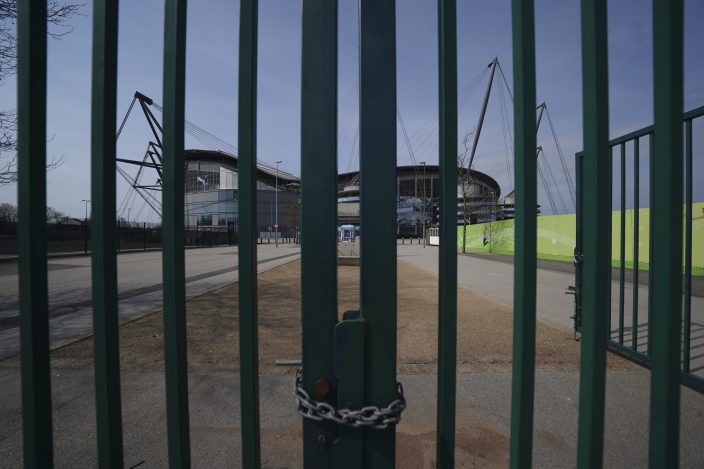 Gates stand locked outside the closed Manchester City Etihad Stadium, in Manchester, northern England, as the English Premier League soccer season has been suspended due to coronavirus, Thursday, April 9, 2020. The new coronavirus causes mild or moderate symptoms for most people, but for some, especially older adults and people with existing health problems, it can cause more severe illness or death. (AP PhotoJon Super)

Sports Minister Oleg Matytsin says the virus outbreak means the parties in the legal proceedings should avoid a ruling against Russia because it would fracture the Olympic movement.

He adds that “when you see that everyone is isolated and everyone is at home ... people understand that now there are priorities and there are issues which go on the backburner. The priority is the future of the Olympic movement.”

Matytsin says sanctioning Russia would damage the Olympic movement and says the country is prepared to host more international sports events once the virus outbreak recedes.

Merkel won't attend G7 summit in person if US goes ...

Chancellor Angela Merkel will not ...

The Latest: UNC issues timeline for athletes to return

The Latest: Bettman set to announce format if NHL returns

The Latest: Cortina seeks to postpone ski worlds to 2022

The Latest: Spanish soccer league can resume in June

The Latest: Djokovic sets up series of tennis events

The Latest: FINA pushes world short-course meet back a year

The Latest: Rayo players return to training after protest