Puerto Rico officials say data that show COVID-19 cases on the island are much lower than in some U.S. states constitute proof they are containing the new coronavirus, but a series of missteps is raising concerns it could be more widespread than believed.

The U.S. territory is bracing for an anticipated peak of cases in early May as federal authorities probe a $38 million contract for testing kits that experts say are urgently needed but never arrived. Local officials, meanwhile, have favored televised discussions over press conferences in a situation that has angered many and drawn comparisons to Hurricane Maria. 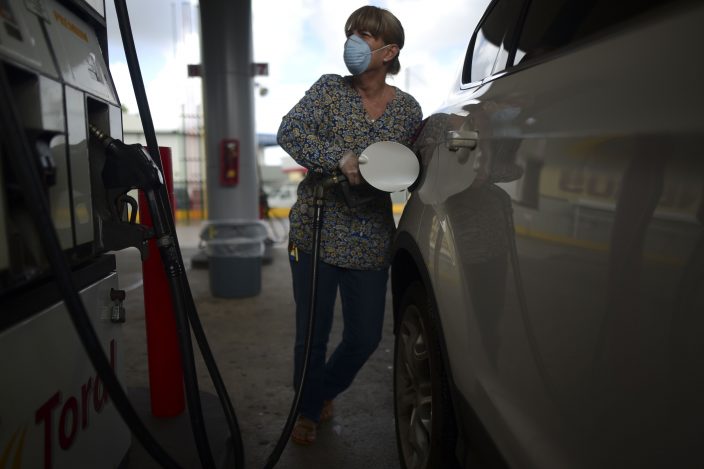 A woman wears a face mask and gloves at the gas station during a government ordered quarantine aimed at curbing the spread of the new coronavirus, that is shuttering all non-essential businesses for two weeks in San Juan, Puerto Rico, Thursday, March 19, 2020. (AP PhotoCarlos Giusti)

Puerto Rico announced its first COVID-19 cases in mid-March, including one involving an elderly Italian tourist. Since then, officials have reported at least 51 deaths and more than 970 confirmed cases, with more than 1,400 test results pending. Some 9,200 people overall have been tested on an island of 3.2 million inhabitants, representing less than 1% of the population. Experts say the number is way below those of U.S. states with similar populations that the local government has used for comparison to say they have the coronavirus under control.

Health experts and economists say one of their biggest concerns is that Puerto Rico officials are using the limited data to estimate the peak of cases and implement a nearly two-month lockdown that has crippled a frail economy amid a 13-year recession as the island struggles to recover from Maria and a series of strong earthquakes.

“We have an uninformed strategy,” said Feliú-Mójer, noting that the island’s governor recently claimed her administration is controlling the curve of contagion. “Puerto Rico really does not have sufficient data to make that kind of assertion.”

However, Puerto Rico hospitals have more than 800 ventilators and roughly half of total ICU beds available and have not reported a spike in patients.

On Monday, Health Secretary Lorenzo González announced that officials would be distributing 200,000 rapid testing kits, acknowledging that the government needs at least 21,000 test results for a solid model. That is more than double what the government has reported.

“We are fighting to obtain testing kits,” he said, noting that Puerto Rico is competing with dozens of countries amid the pandemic.

Meanwhile, newly appointed state epidemiologist David Capó said testing is currently reserved only for those who show symptoms and need it the most.

While the call for widespread testing grows stronger, federal and local authorities and Puerto Rico legislators are investigating a $38 million government contract to buy one million testing kits that was recently canceled amid intense scrutiny. The contract was made with Apex General Contractors, a small Puerto Rico construction company that said it would source the kits from Promedical, a manufacturing company in Australia. Promedical issued a statement to The Associated Press saying it had not been in conversation or entered into a contract with Apex, adding that it sells rapid test kits to approved distributors for less than half the value identified by Apex.

“This is something we have to keep investigating,” Rep. Juan Oscar Morales, a member of the governor’s party, told reporters on Tuesday.

While Puerto Rico has been praised for implementing a lockdown in mid-March that officials say has helped curbed the number of coronavirus cases, the government didn’t start contact tracing until nearly three weeks after the first case was reported, and it still has not publicized the location of hundreds of positive cases. A coalition of mayors awaiting that information said it would go to court to obtain that data. The department also is trying to regain its footing after seeing three health secretaries in the span of two weeks last month, with the first secretary resigning after the governor criticized how he handled the coronavirus crisis.

Fearful that Puerto Rico’s government is not doing enough, the mayors of some towns are taking their own protective measures.

Luis Javier Hernández, mayor of the central mountain town of Villalba, decided to close the town’s borders and initiate its own contact tracing with the help of Cruz, the epidemiologist. They have been the ones informing the health department about cases, instead of the other way around, with Hernández accusing the central government of leaving towns to fend for themselves and of keeping them in the dark regarding COVID-19 statistics.

“Ever since Hurricane Maria, we learned we cannot wait on anyone,” he said. “I thought the government would have learned from that situation.”

Unemployed Puerto Ricans fume as claims pile up in pandemic

Puerto Rico extends lockdown to May to fight COVID-19