Venezuelan officials have taken to state TV in recent weeks to crow that the socialist government is conducting more coronavirus tests than any other country in Latin America. But instead of detecting more infections, as has happened elsewhere when testing ramps up, they are reporting fewer.

The odd result highlights that Venezuela is going about testing its citizens unlike any other country: Mass deployment of a rapid blood antibody test from China that checks for proteins developing a week or more after someone is infected, while using on a much smaller scale the gold-standard nasal swab exam that detects the virus from the onset.

Doctors warn Venezuela’s approach could be missing untold numbers who test negative because they do not yet have high antibody levels but could nonetheless have the virus and be spreading it to others. 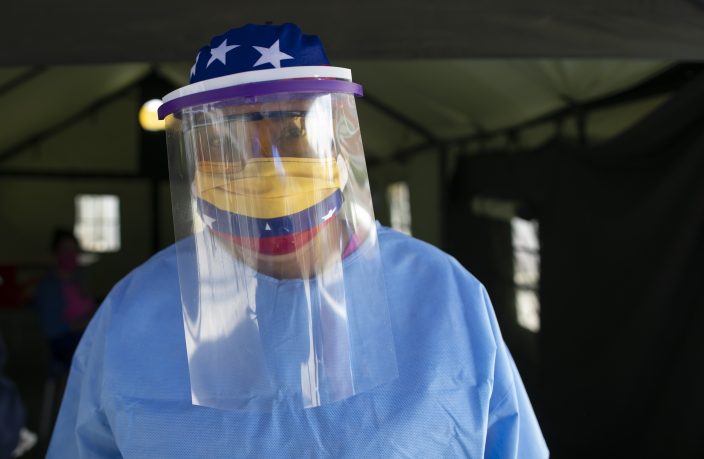 Wearing a mask decorated with the colors of the Venezuelan flag, and a face shield, Hospital Director Dr. Zaira Medina, stands in a tent set up at the entrance of the Ana Francisca Perez de Leon Hospital as she oversees the employment of fast testing for coronavirus in Caracas, Venezuela, Wednesday, April 15, 2020. Venezuela is going about testing its citizens unlike any other country: Mass deployment of a rapid blood antibody test from China that checks for proteins that develop a week or more after someone is infected, while using on a much smaller scale the gold-standard nasal swab exam that detects the virus from the onset. (AP PhotoAriana Cubillos)

“We could be letting people slip under the table who have the infection,” said a doctor at the University of the Andes medical school in the western city of Merida, speaking on condition of anonymity for fear of reprisals.

Physicians in and outside Venezuela say the antibody test is best utilized not as a diagnostic tool but to help assess how widespread the virus is in a community, when to lift quarantines or to identify potential plasma donors.

Yet defenders say Venezuela, mired in a profound economic and public health crisis that began years before the pandemic, has little choice but to rely on it as a first-line test. The nation is one of the least-prepared to confront the pandemic, with hospitals routinely lacking basics like running water, gloves and masks, and thousands of physicians having emigrated in recent years. 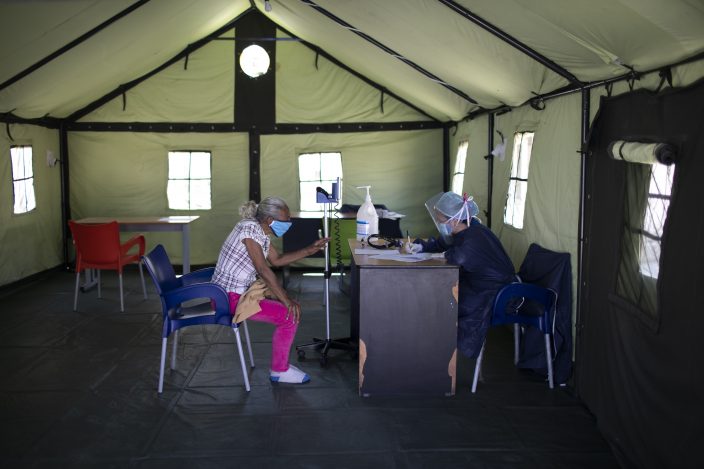 A woman speaks to a doctor in a tent set up to do rapid tests for the new coronavirus, at the entrance of a hospital in Caracas, Venezuela, Wednesday, April 15, 2020. (AP PhotoAriana Cubillos)

“With limited staff and financial resources, the country has to explore other options such as the rapid test,” Dr. Gerardo de Cosío, head of the Venezuela office of the Pan American Health Organization and the World Health Organization, told The Associated Press.

De Cosío, who has worked with government health officials on the nation’s strategy, said Venezuela is further hampered in terms of machines and personnel available to process nasal swab tests, which can take hours.

The antibody test comes from Chinese biotech company Wondfo and takes about 20 minutes to yield a result, health workers say. 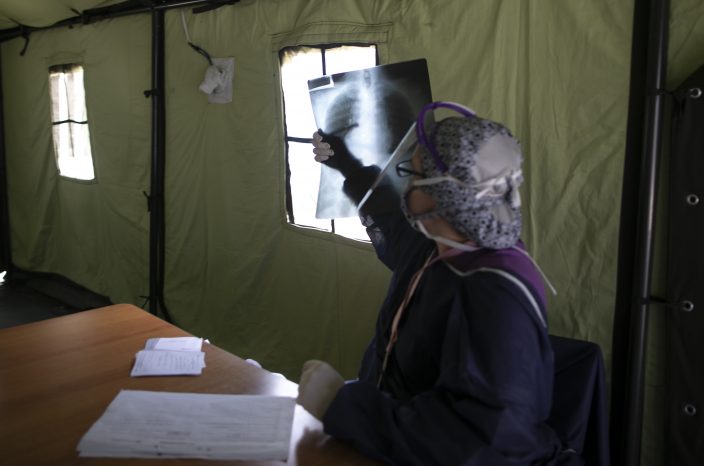 A doctor checks an x-ray from a patient at a tent set at the entrance of the Ana Francisca Perez de Leon Hospital for free quick new coronavirus tests, amid a quarantine to help stop the spread of COVID-19 at the entrance of a Hospital in Caracas, Venezuela, Wednesday, April 15, 2020. (AP PhotoAriana Cubillos)

Those who test positive are then given a nasal swab exam to confirm, a process that can take days because a single lab in Caracas is processing almost all of them. Those who come back negative but have numerous coronavirus symptoms or were in contact with an infected person also undergo the swab test.

Government officials, who did not respond to a request for information on the matter, have not said exactly who is getting tested, but doctors and images on state television indicate subway workers, hospital staff and returning fishermen and migrants are among those being tested in recent days. It's not clear how many positives the antibody tests have yielded. 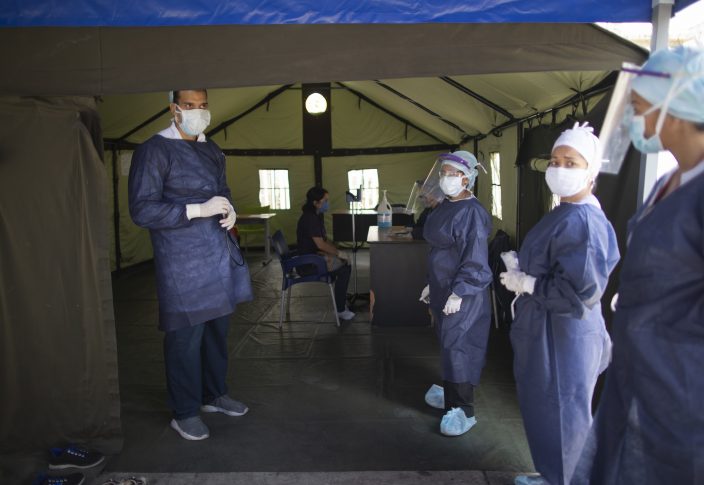 Venezuelan doctors stand at the entrance of a tent set up at the Ana Francisca Perez de Leon hospital for people get a free, quick coronavirus test amid a quarantine to help stop the spread of COVID-19 in Caracas, Venezuela, Wednesday, April 15, 2020. (AP PhotoAriana Cubillos)

“I’m not sure I would choose to do exactly what they’re doing,” said Dr. Angela Caliendo, a professor of medicine at Brown University and board member of the Infectious Diseases Society of America. Still, she too noted Venezuela’s resource difficulties and said “they have a lot of these tests that are inexpensive to run (and) they’re getting quite a bit of data.”

Bruised by years of economic and political calamity and more recently by U.S. sanctions, President Nicolás Maduro appealed for international help in March even before the country's first confirmed case. Chief allies – Beijing, Havana and Moscow – plus the United Nations sent planeloads of tests, medical gear and, in Cuba’s case, doctors.

One of the largest shipments from China arrived at the end of the month carrying a half-million of the antibody tests. 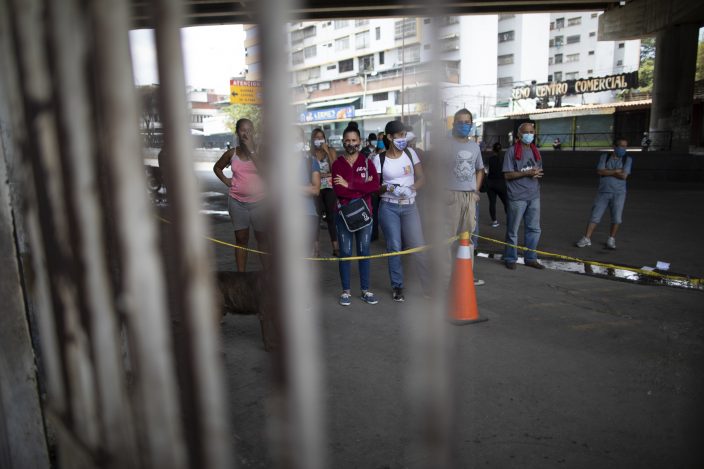 People wait to get into a tent for a free fast coronavirus test amid a quarantine to help stop the spread of COVID-19, at the entrance of a Hospital in Caracas, Venezuela, Wednesday, April 15, 2020. (AP PhotoAriana Cubillos)

As of March 31, according to a report by the U.N. Office for the Coordination of Humanitarian Affairs, Venezuela had done just 1,779 swab tests with an 8% positive rate.

In the two weeks since, authorities say they have conducted more than 250,000 tests, and Pan American Health Organization figures show all but about 3,000 were antibody tests.

“We are at the forefront of Latin America,” Vice President Delcy Rodríguez declared. 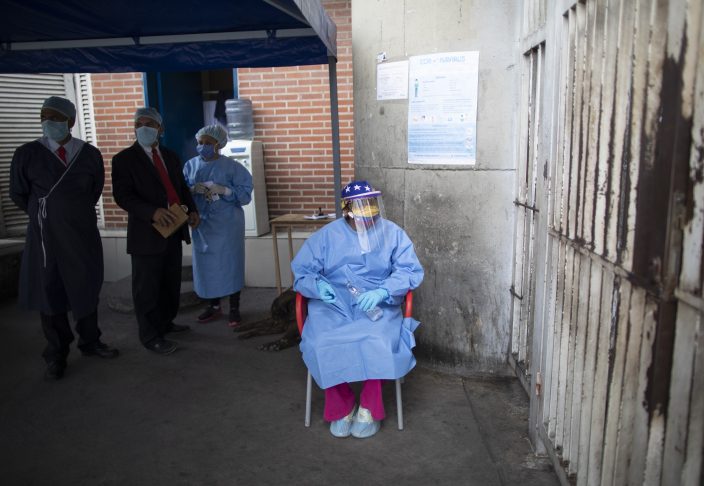 Wearing a face mask and shield with the colors of the Venezuelan flag, Hospital Director Dr. Zaira Medina, sits at the entrance of a tent set up at the Ana Francisca Perez de Leon Hospital, as she oversees the fast coronavirus test operation, amid a quarantine to help stop the spread of COVID-19 in Caracas, Venezuela, Wednesday, April 15, 2020. (AP PhotoAriana Cubillos)

But it’s an inexact comparison since the rest of the region relies on the genetic swab test.

Neighboring Colombia, for example, has conducted about 50,000 tests, all swabs. Mexico health undersecretary Hugo López-Gatell has openly expressed disdain for the antibody tests, comparing them to home pregnancy kits and saying they’re about as reliable as a coin toss. Chile has also ruled out using them as a diagnostic tool.

“It’s complementary to what we are doing,” Chilean Health Minister Jaime Mañalich said. “But it doesn’t work for a general screening of the population.”

The Wondfo test has won approval by an EU regulating agency, but some physicians warn that many exams are being pushed to market without rigorous testing. Specialists say it’s not yet known how sensitive many of them are.

Venezuelan officials say 143 coronavirus cases were confirmed during the second half of March, and 61 since the dramatic ramping up with the antibody tests.

“What’s seen normally is that when a country increases testing, cases increase,” said Enrique Acosta, a researcher at the Max Planck Institute for Demographic Research in Germany. “I look at (Venezuela's) numbers with concern.”

The University of the Andes doctor said he and others initially approached the government about conducting genetic test screening from a local lab, as they had done during the 2009 H1N1 influenza pandemic, but officials shut down discussions saying the antibody tests would be used instead in much of the country.

Experts say the antibody tests do have value as a broader public health tool and are likely to be used more around the world in the months ahead.

“It does give you a snapshot of what is going on with the virus,” said Dr. Carl Fichtenbaum, an infectious disease specialist at the University of Cincinnati. “It’s probably a bottom number that you have.”

Some physicians believe it’s possible the virus has not yet begun to spread widely in Venezuela, which could help explain the still-low case number. The country was largely cut off from the world even before the pandemic as many airlines pulled out due to the economic crisis, and severe gasoline shortages make even domestic travel difficult.

A strict quarantine put in place by Maduro – the first nationwide shutdown in Latin America – could also be slowing the virus’ spread.

In the coastal state of Nueva Esparta, a military plane arrives about every three days to pick up nasal specimens for transport to the lab in Caracas for analysis. Until results come back, doctors must rely on potentially imperfect information from antibody testing.

“It’s all we have right now,” said Dr. Elesban Gómez, president and director of the state’s public health unit. “It’s the only thing to guide us.”

BUDAPEST, Hungary— The number of c ...

German media report that a fugitiv ...

Venezuela's apparent respite from COVID-19 may not last long

Economic fallout from virus felt in gas lines in Venezuela