Puerto Ricans are becoming increasingly disgruntled with how the government is handling the COVID-19 crisis as details emerge, including the death a 29-year-old man who became the U.S. territory’s youngest victim after his father said he wasn’t tested the first two times he sought help at an emergency room.

The allegation was made as the government announced Saturday that a private company took responsibility for disconnecting a refrigerated trailer packed with food that was supposed to be distributed to those in need amid a two-month lockdown to curb coronavirus cases, causing chicken, vegetables, fruits and other items to spoil. 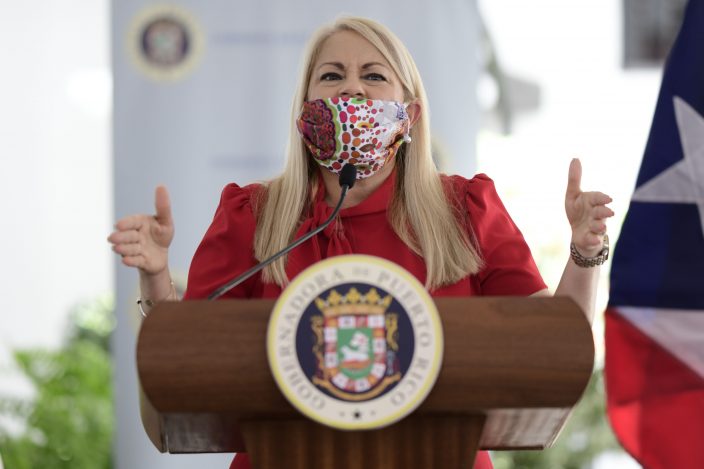 Gov. Wanda Vazquez, wearing a protective face mask, announces the cancellation of all contracts awarded to people and companies whose names have been publicized as part of a local and federal investigation into the intended purchase of new coronavirus testing kits, at a press conference in San Juan, Puerto Rico, Thursday, April 16, 2020. (AP PhotoCarlos Giusti)

He said that while the government will be reimbursed, the incident is under investigation after the company said it received instructions to disconnect the trailer from an employee of a local emergency management office.

The food was left over from when Puerto Rico was hit with a series of strong earthquakes in recent months that killed one person and caused millions of dollars in damage along the island’s southern coast. Officials did not provide the estimated cost of the food lost.

Meanwhile, newly appointed Health Secretary Lorenzo González acknowledged during Saturday’s press conference that the island’s COVID-19 related data is not entirely accurate and that the government is working to improve it.

“It’s imperfect data, but we’re going to use it...because it’s the one we have,” he said.

González said he hopes to eventually make missing data available, including the number of people who have recuperated from COVID-19.

Puerto Rico has reported more than 1,100 confirmed cases and more than 1,700 pending test results, with a total of 10,900 tested on an island of 3.2 million, the lowest per capita testing rate compared with any U.S. state.

At least 60 deaths have been reported, including that of a 29-year-old man whose father identified him as Joshua James Sánchez and said he had no chronic health conditions. The father, Luis Ángel Sánchez, accused health workers in a social media post of testing and admitting his son only after he went into respiratory failure.

“I don’t wish this disastrous experience on anybody,” he said.

Sánchez did not immediately respond to a request for comment.

As a growing number of Puerto Ricans demand more widespread testing, among other things, they have organized drive-by protests and bang on pots every night to signal their displeasure with the administration of Gov. Wanda Vázquez, who has been praised, however, for placing the island on lockdown since March 15.

The lockdown is scheduled to expire on May 3, but González said he will recommend it be extended to at least June 1.