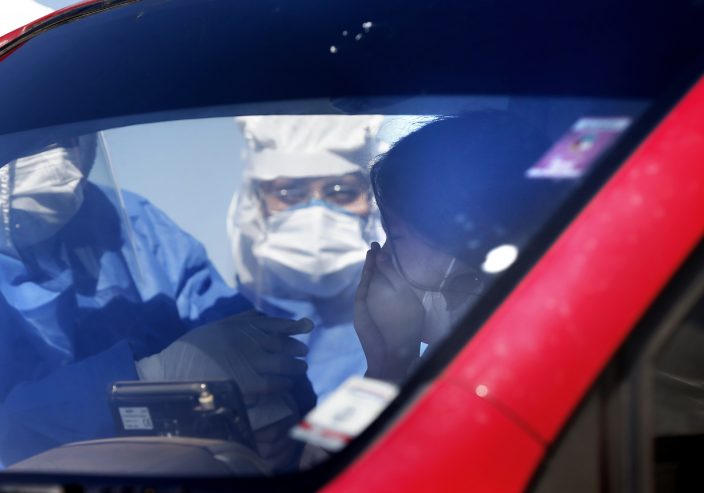 A youth reacts after she was tested for COVID-19 at a checkpoint on a highway in Asuncion, Paraguay, Monday, April 20, 2020. (AP PhotoJorge Saenz) 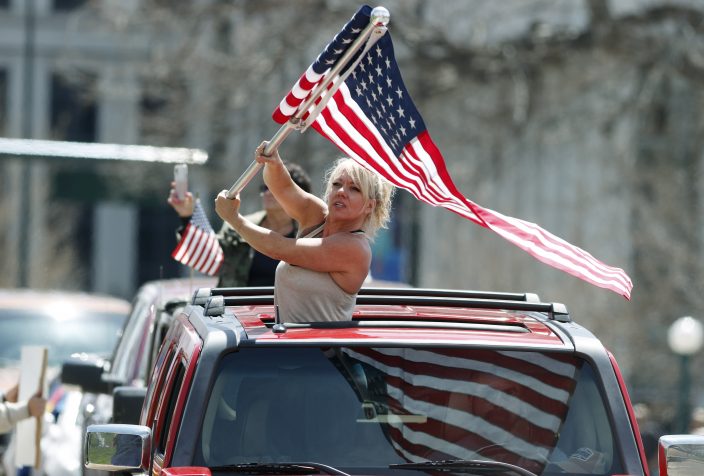 A protester waves an American flag during a car protest against the stay-at-home order issued by Colorado Governor Jared Polis to stem the spread of the new coronavirus Sunday, April 19, 2020, in Denver. (AP PhotoDavid Zalubowski)

VIRUS OUTBREAK-LOANS — Companies with thousands of employees, past regulatory run-ins and risks of financial failure even before the coronavirus walloped the economy were among those receiving millions from a relief fund that Congress created to help U.S. small businesses through the crisis, an Associated Press investigation finds. By Reese Dunklin, Justin D. Pritchard, Justin Myers and Krysta Fauria. SENT: 1,670 words, photos. An abridged version of 990 words has also been sent. 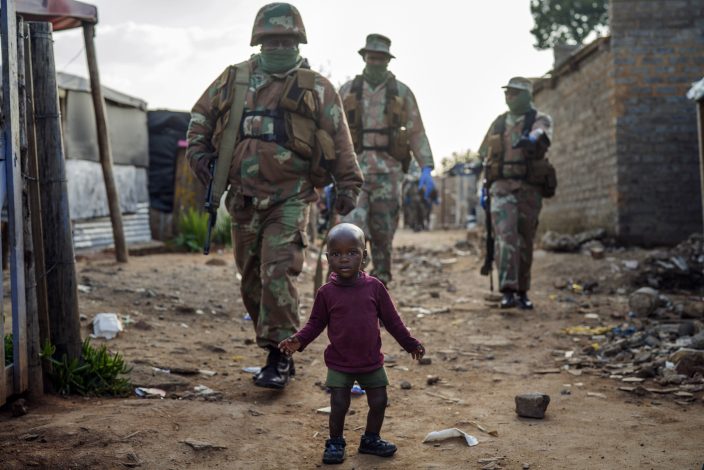 South African National Defense Forces patrol the Sjwetla informal settlement after pushing back residents into their homes, on the outskirts of the Alexandra township in Johannesburg, Monday, April 20, 2020. The residents were protesting the lack of food. Many have lost their income as South Africa is under a strict five-week lockdown in a effort to fight the coronavirus pandemic. (AP PhotoJerome Delay)

VIRUS-OUTBREAK — The World Health Organization says that rushing to ease coronavirus restrictions will likely lead to a resurgence of the illness, a warning that comes as governments start rolling out plans to get their economies up and running again. “This is not the time to be lax. Instead, we need to ready ourselves for a new way of living for the foreseeable future,” says Dr. Takeshi Kasai, the WHO regional director for the Western Pacific. By Chris Blake and Colleen Long. SENT: 970 words, photos. With VIRUS-OUTBREAK-THE-LATEST. 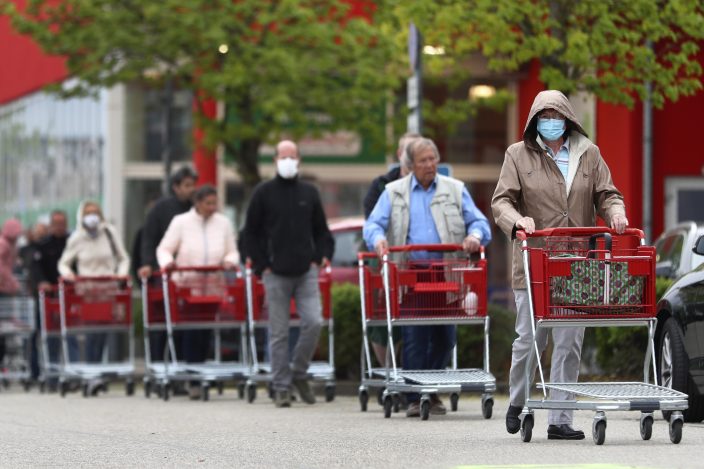 People wearing protective masks queue up to go in a garden store in Munich, Germany, Monday, April 20, 2020. The German government has moved to restrict freedom of movement for people, in an effort to slow the onset of the COVID-19 coronavirus. (AP PhotoMatthias Schrader)

VIRUS OUTBREAK-BURYING THE DEAD — As the pandemic’s death toll charges past 10,000 in New York City, funeral directors, gravediggers and others who tend to a body’s final chapter are sprinting to keep up. By David Goldman and Matt Sedensky. SENT: 950 words, photos, video.

VIRUS OUTBREAK-WASHINGTON — Governors from both parties push back after President Donald Trump accuses Democrats of playing “a very dangerous political game” by insisting there is a shortage of tests for the coronavirus. The governors say the White House must do more to help states do the testing that’s needed before they can ease up on stay-at-home orders. By Alan Suderman, John Hanna and Jill Colvin. SENT: 970 words, photos, video. Also see MORE ON VIRUS OUTBREAK below.

VIRUS OUTBREAK-RAMADAN — Ramadan begins with the new moon later this week and Muslims around the world are trying to maintain the many cherished rituals of Islam’s holiest month without further spreading the outbreak. By Samy Magdy and Lee Keath. SENT: 1,140 words, photos. 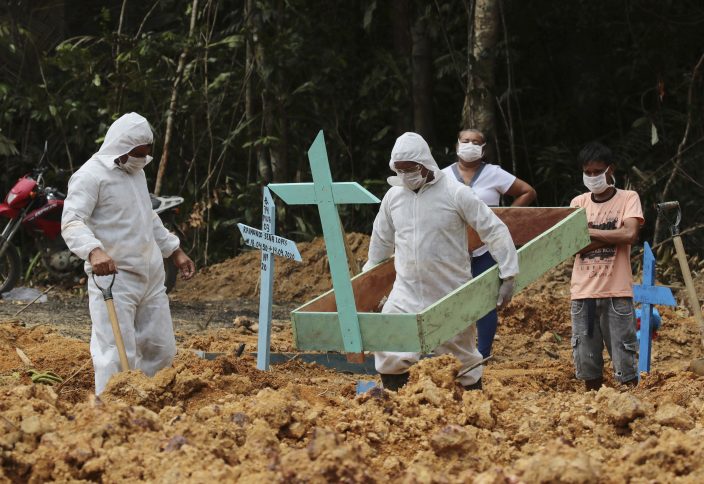 In this April 16, 2020 photo, funeral workers in protective gear prepare the grave of a woman who is suspected to have died of COVID-19 disease, at the Nossa Senhora Aparecida cemetery, in Manaus, Amazonas state, Brazil. Gravediggers buried 60 people that day, about triple the pre-virus average, according to a cemetery official. (AP PhotoEdmar Barros)

OIL PRICES-Q&A The world is awash in oil, there’s little demand for it and we’re running out of places to put it. That in a nutshell explains the strange and unprecedented action in the market for crude oil futures contracts, where traders essentially offered to pay someone else to deal with the oil they were due to have delivered next month. By Business Writer Cathy Bussewitz. SENT: 920 words, photo. Also see FINANCIAL-MARKETS below.

VIRUS OUTBREAK-INDONESIA’S DENIAL — While Indonesia’s neighbors scrambled early this year to try to contain the spread of the coronavirus, the government of the world’s fourth most populous nation insisted that everything was fine. SENT: 1,130 words, photos.

VIRUS-OUTBREAK-DESPERATE-PORK-FARMERS — Restaurant closures due to the coronavirus have contributed to an estimated $5 billion in losses this year for the U.S. pork industry, and almost overnight millions of hogs stacking up on farms now have little value. SENT: 920 words, photos.

VIRUS OUTBREAK-UNFORGIVING APRIL — Mid-April has delivered some of American life’s most difficult moments, and now it’s necessary to add the coronavirus to that disturbing list. By National Writer Ted Anthony. SENT: 1,000 words, photos.

VIRUS OUTBREAK-CONGRESS — The Trump administration and Congress struggle to seal an agreement on more than $450 billion to help small businesses hurt by the coronavirus, but both sides insist a final pact is within reach. SENT: 870 words, photos.

VIRUS OUTBREAK-ISRAEL-HOLOCAUST — With the global coronavirus pandemic ravaging the elderly, Israel’s aging population of Holocaust survivors finds itself on the country’s annual Holocaust Remembrance Day this year much like they were during World War II — alone and in fear of the unknown. SENT: 670 words, photo.

VIRUS OUTBREAK-MEDIA FREEDOM — Media watchdog Reporters Without Borders is sounding the alarm that the coronavirus pandemic poses a threat for press freedom around the world. SENT: 370 words, photos.

VIRUS OUTBREAK-CALIFORNIA TESTING — An estimated 320,000 adults in Los Angeles County may have been infected with coronavirus, according to preliminary results of a study that suggests the illness is far more widespread than current testing shows and the death rate is much lower. SENT: 1,050 words, photos.

VIRUS OUTBREAK-NEW ZEALAND ELIMINATION — While most countries are working on ways to contain the coronavirus, New Zealand has set itself a much more ambitious goal: eliminating it altogether, something experts believe the country could pull it off. SENT: 1,150 words, photos.

VIRUS-OUTBREAK-ASIA — Japan’s Prime Minister Shinzo Abe expresses concern that people haven’t been social distancing as much as they are supposed to under the state of emergency he declared two weeks ago to fight the coronavirus pandemic. SENT: 900 words, photos. With VIRUS OUTBREAK-SOUTHEAST ASIA GLANCE.

AP’S CORONAVIRUS PODCAST, “Ground Game: Inside the Outbreak,” today is about “One Good Thing,” a weekday AP feature that highlights the kindness of individuals during the COVID-19 pandemic. Listen to the podcast at https://appodcasts.com/category/ground-game/. Embed code is available on AP Coverage Plan.

ELECTION 2020-BIDEN-FUNDRAISING — With a recession likely on the horizon, wealthy Democratic donors may be the only ones with the ability to pour cash into the party’s effort to beat Trump. SENT: 920 words, photo.

VIRUS OUTBREAK-REHAB HURDLES — Rehab programs for many injured college football players are being affected by limited access to equipment and one-on-one consultation, leading some experts to say those issues could lengthen recovery times and put athletes at risk for re-injury. By Sports Writers Cliff Brunt and Mitch Stacy. SENT: 800 words, photos.