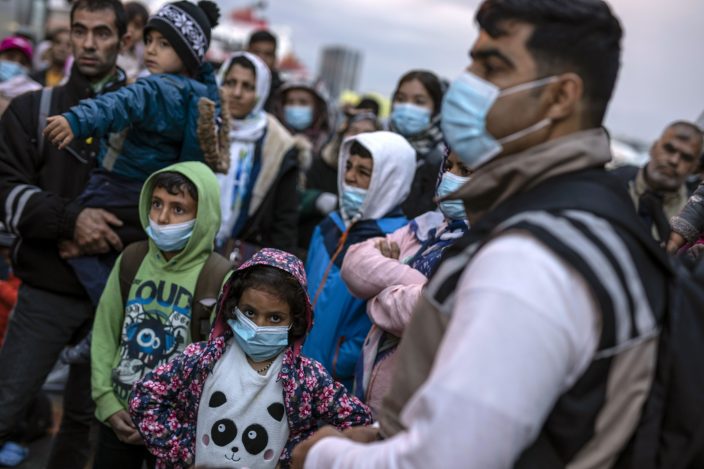 Refugees and migrants wearing masks to prevent the spread of the coronavirus, wait to get on a bus after their arrival at the port of Piraeus, near Athens on Monday, May 4, 2020. Greek authorities are moving 400 migrants, mostly families, to the mainland to help ease overcrowded conditions at the camp Moria in Lesbos island. (AP PhotoPetros Giannakouris)

VIRUS-OUTBREAK-NURSING-HOME-LOCKDOWN — Like other places that house and care for older adults, the Park Springs community near Atlanta is working to prevent a widespread outbreak of the coronavirus. But Park Springs has taken one unusual step. Since the end of March, the facility has had employees live on its campus. About 70 employees of what is usually a staff of 300 are sheltering in place alongside residents in the upscale community. By Sudhin Thanawala. SENT: 1,030 words, photos, video. VIRUS OUTBREAK-1918-2020 — In many ways, 2020 is looking like 1918, the year the great influenza pandemic raged. Like then, science is unable to crush an insidious yet avoidable infectious disease before hundreds of thousands die from it. By Calvin Woodward. SENT: 1,650 words, photos. An abridged version of 820 words is also available. 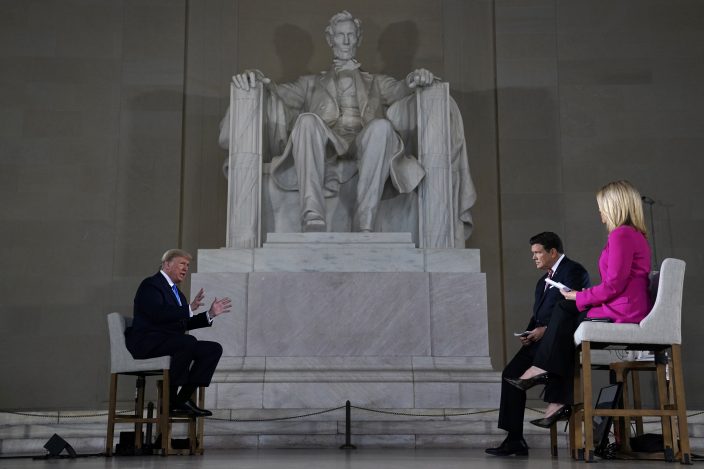 VIRUS OUTBREAK — China and South Korea, which had early, intense outbreaks of the coronavirus, together report only four new infections and are slowly resuming public events after months of containment efforts. Meanwhile, the United States is taking halting steps to lift some restrictions even as thousands of new cases continue to be reported each day. By Nick Perry. SENT: 780 words, photos. With VIRUS OUTBREAK-ASIA — South Korea has low daily increase as sports resume; VIRUS-OUTBREAK-THE-LATEST.

VIRUS OUTBREAK-PHONE SURVEILLANCE — As governments around the world consider how to monitor new coronavirus outbreaks while reopening their societies, many are starting to bet on smartphone apps to help stanch the pandemic. But their decisions on which technologies to use — and how far those allow authorities to peer into private lives — are highlighting some uncomfortable tradeoffs between protecting privacy and public health. Matt O’Brien and Christina Larson. SENT: 1,020 words, photos. Also see MORE ON THE VIRUS OUTBREAK below. 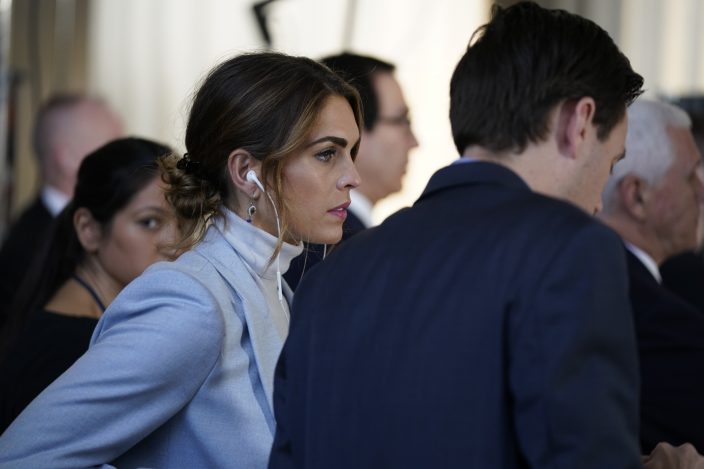 CHINA-EXIT BANS — In 2017, Chinese authorities placed exit bans on U.S. citizen Daniel Hsu and his wife, Jodie Chen, blocking them from returning home to suburban Seattle and effectively orphaning their 16-year-old daughter in America. Hsu was held in solitary confinement for six months, though he is not guilty of any crime. He says his detention was part of a bid to force his father to return to China to face corruption charges. Critics say the Chinese Communist Party’s expanding use of exit bans to block people from leaving reeks of hostage-taking and violates international law. By Erika Kinetz. SENT: 3,020 words, photos. An abridged version of 1,200 words is also available.

YEMEN-SOUTH IN TURMOIL — A bid by separatists funded by the United Arab Emirates to assert control over southern Yemen reopens a dangerous new front in Yemen’s civil war and pushes it closer to fragmentation at a time when the coronavirus pandemic poses a growing threat. By Maggie Michael. SENT: 970 words, photos.

ELECTION 2020-BIDEN VP — As Joe Biden’s search for a vice presidential running mate heats up, he is facing growing pressure to choose a black woman, a move that could further energize the Democratic Party’s loyal base of African American voters. By Kat Stafford and Bill Barrow. SENT: 990 words, photos. 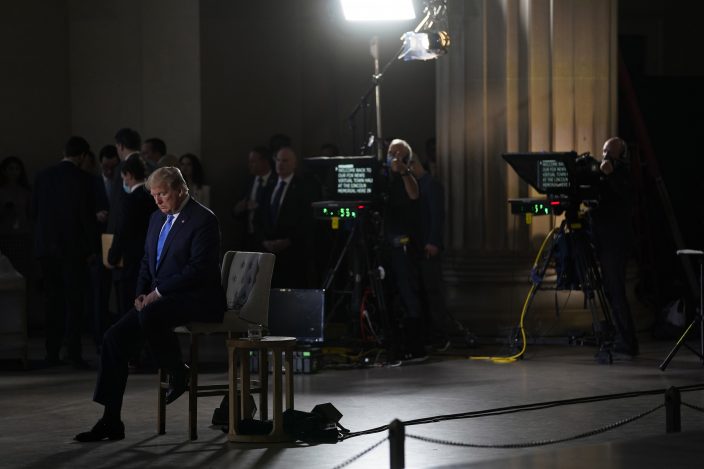 President Donald Trump looks down during a break in a Fox News virtual town hall from the Lincoln Memorial, Sunday, May 3, 2020, in Washington. (AP PhotoEvan Vucci)

VIRUS OUTBREAK-TRUMP-TRAVEL — For much of the last two months, President Donald Trump has rarely left the grounds of the White House as he’s dealt with the fallout of the coronavirus pandemic. That changes Tuesday, when Trump is scheduled to travel to Arizona. SENT: 970 words, photos. UPCOMING: 900 words after 10 a.m. departure.

VIRUS OUTBREAK-SPAIN’S STRICKEN COUNTRYSIDE — Many in Spain’s small and shrinking villages thought their low populations would protect them from the coronavirus pandemic. The opposite appears to have proved true. SENT: 1,000 words, photos.

VIRUS OUTBREAK-AIRCRAFT CARRIER — The message driving the hard-working crew of the coronavirus-stricken aircraft carrier USS Theodore Roosevelt is simple: It’s time to get back to work. SENT: 990 words, photos.

VIRUS OUTBREAK-BRAZIL — Brazilian President Jair Bolsonaro says he twice tested negative for the coronavirus but many, including a federal judge, are demanding he share the actual results. SENT: 870 words, photos.

GROUND GAME — AP’s coronavirus podcast, “Ground Game: Inside the Outbreak,” today is about how the COVID-19 pandemic has hit New York businesses — from the city’s famous restaurants to its fashion industry. Listen to the podcast at https://appodcasts.com/category/ground-game/. Embed code is available on AP Coverage Plan.

SCHOOL SHOOTING-FLORIDA-SHERIFF — The Florida sheriff appointed by the governor after the 2018 Parkland high school massacre is defending himself over allegations that he should have disclosed he fatally shot another teenager when he was 14 in Philadelphia. SENT: 780 words, photo.

UNITED NATIONS-DISPLACED CHILDREN — The U.N. children’s agency says that an estimated 46 million people — 19 million of them children — fled violence and conflict last year but remained in their home country, and millions more were displaced by disasters. SENT: 270 words.

FINANCIAL-MARKETS — Shares advanced in Asia, lifted by a surge in oil prices and an overnight rebound on Wall Street thanks to a solid showing from big technology companies. By Business Writer Elaine Kurtenbach. SENT: 650 words, photos.

MLB PROJECTED PAYROLLS — Major League Baseball’s average salary as opening day approached remained virtually flat at around $4.4 million for the fifth straight season, according to a study of contracts by The Associated Press, a slowing unprecedented during the previous half-century. By Baseball Writer Ronald Blum. SENT: 900 words, photos.

1981 REVISTED — Fans should be prepared for a significantly shortened season if baseball is able to come back at all this year, and the 1981 campaign may be the most relevant comparison available. By Baseball Writer Noah Trister. SENT: 990 words, photos.