Venezuela’s chief prosecutor ordered the arrest Friday of a former Green Beret and two opposition figures living in the United States for their purported role in a botched operation aimed at removing Nicolás Maduro from power.

Tarek William Saab said Venezuela will seek the capture of Jordan Goudreau, a military veteran who has claimed responsibility for the attack, as well as Juan José Rendón and Sergio Vergara, two U.S.-based advisers to opposition leader Juan Guaidó.

“They are living in impunity,” Saab said. “In tranquility over there.” 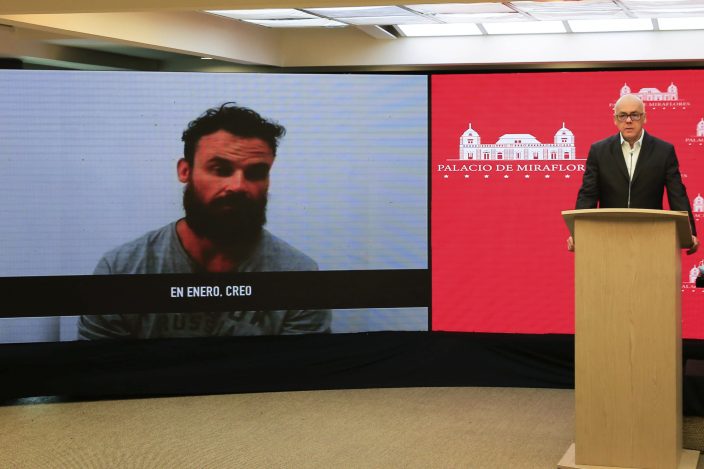 In this photo released by Venezuela's Ministry of Communication, Jorge Rodriguez shows a video of American Airon Berry, a former U.S. special forces soldier associated with the Florida-based private security firm Silvercorp USA, during a televised statement in Caracas, Venezuela, Thursday , May 7, 2020. Three Democrats on the Senate Foreign Relations Committee are demanding answers from the Trump administration about how much it knew about an attempted raid to capture Venezuelan President Nicolas Maduro, an operation they said potentially violated U.S. law and ran counter to American support for negotiations to end the country's political standoff. (Venezuela's Ministry of Communication press office via AP)

U.S. law enforcement is investigating Goudreau, though it remains unclear if he will charged. President Donald Trump does not recognize Maduro’s government, making it highly unlikely that his administration would accept any extradition request.

The Trump administration has denied all responsibility in the armed raid, which resulted in the arrests of two Americans, Luke Denman and Airan Berry, who were purportedly hired by Goudreau’s private firm to participate in the failed assault.

In an interview with Fox News Channel Friday, Trump said he “didn’t know too much” about the attack and again denied any U.S. government involvement.

“It wasn’t led by Gen. George Washington, obviously,” he said. “This was not a good attack.”

Venezuelan authorities have been insisting that Trump’s government was behind the plot, with Saab noting Friday that the U.S. had previously offered a $15 million bounty for Maduro’s arrest, which he said opened the door for such attacks.

“That gives a green light for an incursion into our territory,” he said.

Denman and Berry are both former U.S. special forces soldiers who served in Iraq. In video statements aired on Venezuela’s state television, both said they’d been hired by Goudreau to train rebel troops in Colombia and target Maduro. Goiudreau also has said they were part of his operation.

Rendón has acknowledged giving Goudreau $50,000 to cover some expenses and said that he and Vergara signed an agreement with the three-time Bronze Star recipient. Meanwhile, Goudreau has presented what said is an audio recording made on a hidden cellphone in which Guaidó can be heard briefly greeting the combat vet via video conference.

The opposition leader recognized by the U.S. and about 60 other nations has Venezuela’s rightful president has denied any involvement in the operation.

Saab said Venezuela is issuing 22 new arrest orders and did not mention Guaidó among them.

Satellite TV back for Venezuelans left in dark by sanctions

Official: US will extend support for Venezuela's Guaidó

Trump denies ties to Venezuelan attack with 2 US men jailed