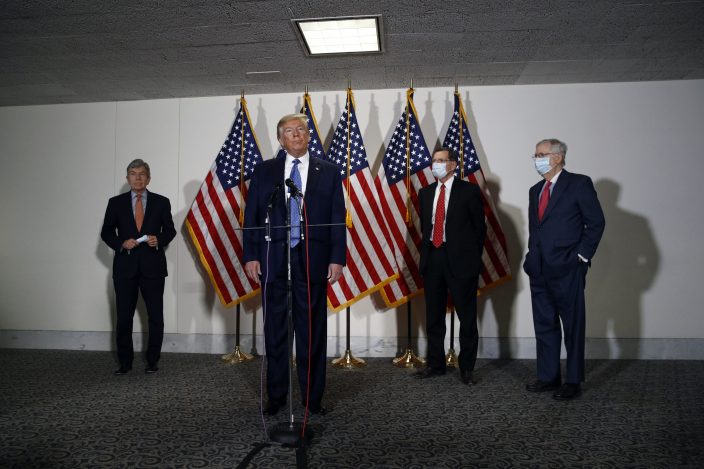 VIRUS OUTBREAK-TRUMP-DOCTORS — Republican political operatives are recruiting “pro-Trump” doctors to go on television to prescribe reviving the U.S. economy as quickly as possible, without waiting to meet safety benchmarks proposed by public health experts to slow the spread of the coronavirus. The plan was discussed in a May 11 conference call; a leaked recording of the call was provided to The Associated Press. By Michael Biesecker and Jason Dearen. SENT: 1,180 words, photos. 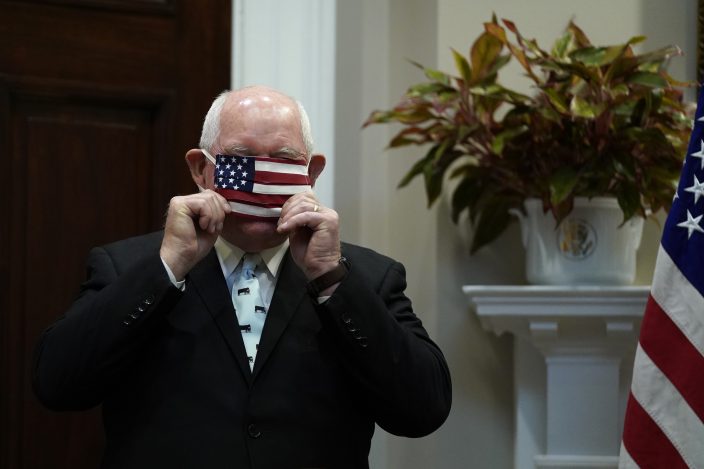 Agriculture Secretary Sonny Perdue adjusts his mask before an event in the Roosevelt Room of the White House, Tuesday, May 19, 2020, in Washington. (AP PhotoEvan Vucci)

VIRUS OUTBREAK — Hundreds of thousands of high school seniors in South Korea had their temperature checked and rubbed their hands with sanitizer as they returned to school, many for the first time since late last year after their new term was repeatedly pushed back by the coronavirus pandemic. In a reminder that the so-called “new normal” was anything but, more than 60 schools near Seoul quickly sent their students home as a precaution after two students who hadn’t even attended class were found infected. By Chris Blake and Michelle R. Smith. SENT: 870 words, photos. With VIRUS-OUTBREAK-THE-LATEST. 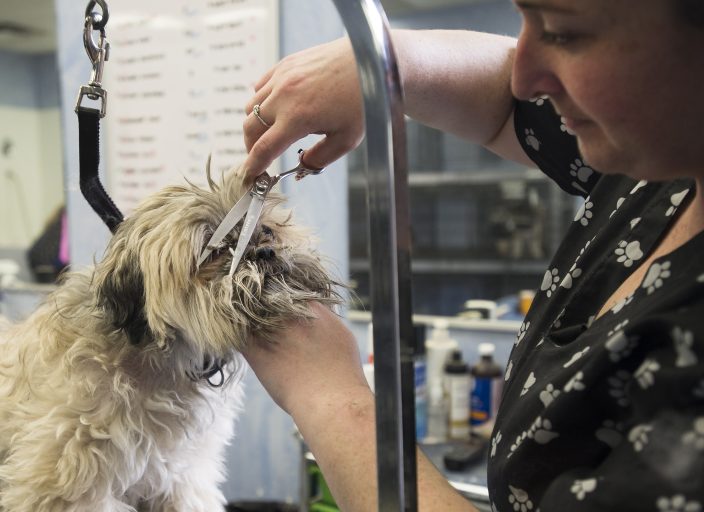 Owner Daiana Goldberger grooms a dog at You Lucky Dog Grooming during the COVID-19 pandemic in Mississauga, Ontario, Tuesday, May 19, 2020. The Ontario government is allowing some services to reopen as part of phase one. (Nathan DenetteThe Canadian Press via AP)

VIRUS-OUTBREAK-IS-CASH-KING? — In troubled times, people have been known to hoard currency at home. It’s often a financial security blanket against deep uncertainty. But in this crisis, things are different. This time cash itself, passed from hand to hand just like the coronavirus, is part of what some people fear. Money’s status has changed during the virus era — perhaps for good. By Zeina Karam. SENT: 1,330 words, photos. An abridged version of 920 words is available.

VIRUS OUTBREAK-MISINFORMATION-STATES — New Jersey has launched a website to debunk rumors and hoaxes associated with the spread of the coronavirus, following a false text message of impending national lockdown that circulated widely across the United States. The effort comes amid a torrent of misinformation about the outbreak and is part of similar actions underway in other states to knock down potentially harmful misinformation. By Mike Catalini and David Klepper. SENT: 840 words, photo. Also see MORE ON THE VIRUS OUTBREAK below. 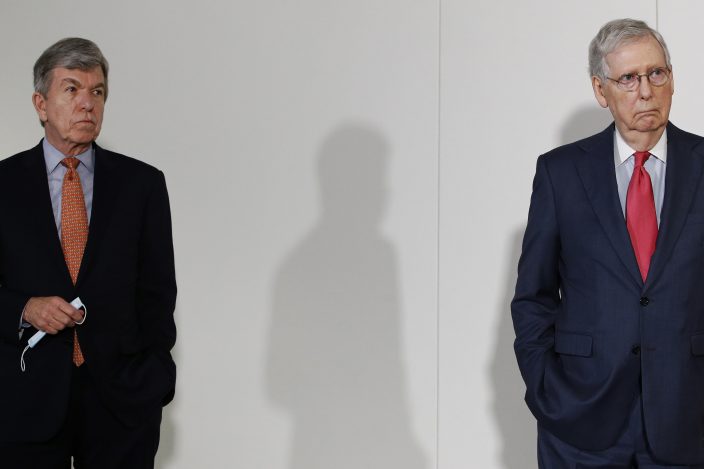 LEBANON-ISRAEL-PREPARING FOR WAR — Twenty years after Hezbollah guerrillas pushed Israel’s last troops from southern Lebanon, both sides are gearing up for a possible war that neither seems to want. Israeli troops are striking Hezbollah targets in neighboring Syria and drilling for what could be an invasion of Lebanon. Hezbollah is beefing up its own forces and threatening to invade Israel. The bitter enemies routinely exchange warnings and threats. By Bassem Mroue and Josef Federman. SENT: 1,040 words, photos. Also see ISRAEL-PALESTINIANS below.

ASIA-CYCLONE — A powerful cyclone begins dumping rain on coastal India and Bangladesh as more than 2 million people were being moved to shelters before the storm hits land in the afternoon. Cyclone Amphan slows slightly as it reaches cooler waters near the coast, but with wind speeds up to 105 mph, the storm could cause extensive damage. By Aniruddha Ghosal and Julhas Alam. SENT: 390 words, photos.

SUPER-DUPER WEAPON — Little on the Pentagon’s drawing board illustrates more clearly the Trump administration’s worry about China and Russia than its work on hypersonic weapons, which fly a mile a second or faster and maneuver in ways that make them extra difficult to detect and destroy in flight. President Donald Trump calls them “super-duper missiles.” By National Security Writer Robert Burns. SENT: 930 words, photo. 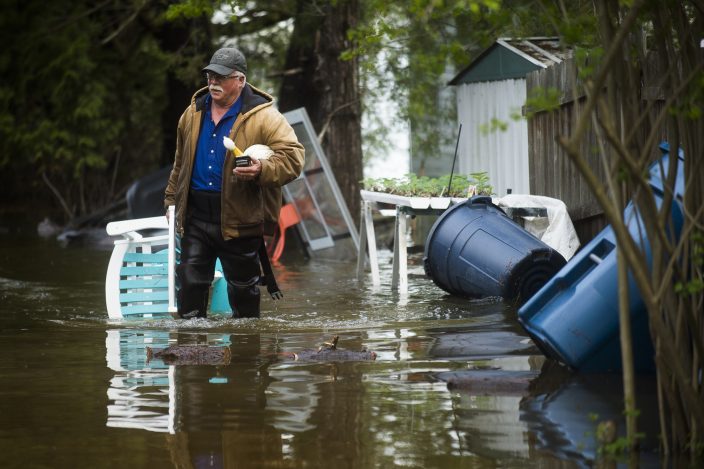 Mark Musselman brings a chair to the front of his house from the back yard, wading through floodwater, Tuesday, May 19, 2020 in Edenville, Mich. People living along two mid-Michigan lakes and parts of a river have been evacuated following several days of heavy rain that produced flooding and put pressure on dams in the area. (Katy KildeeMidland Daily News via AP) 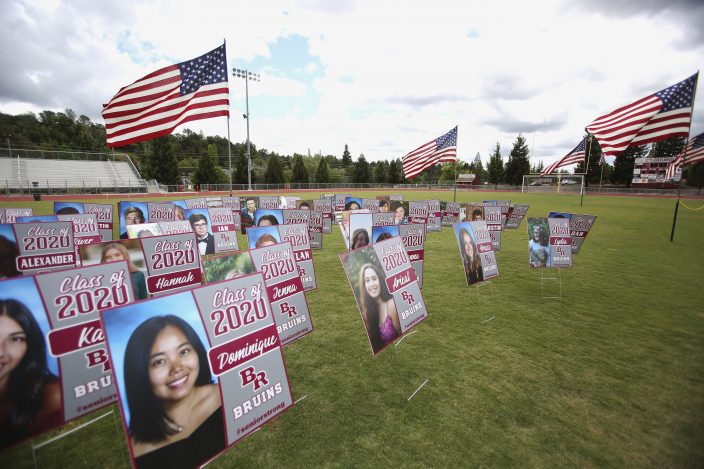 This photo shows poster board pictures of the Bear River High School class of 2020 in Grass Valley, Calif., Tuesday, May 19, 2020, taking the place of their physical presence during Bear River's graduation going on later this week. The general public is not allowed to attend. (Elias FunezThe Union via AP)

VIRUS-OUTBREAK-CASINO-COUNTY — A county in the historically impoverished Mississippi Delta region has been dealt a serious economic blow by the new coronavirus. SENT: 960 words, photos.

VIRUS OUTBREAK-BRITAIN-MY STREET-PHOTO GALLERY — How the virus changed my street — for the better. SENT: 410 words, photos. 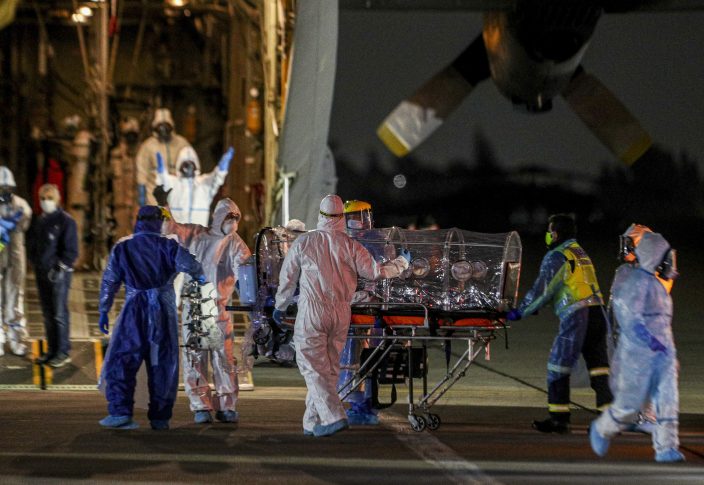 Medical workers move a COVID-19 patient to be flown from a Chilean Air Force base to the city of Concepcion, to free up space in the intensive care units of the capital's hospitals, in Santiago, Chile, Tuesday, May 19, 2020. (AP PhotoEsteban Felix)

VIRUS-OUTBREAK-GRADUATION — High schools nationwide have canceled or postponed traditional graduation ceremonies to avoid worsening the spread of the new coronavirus, but some are going ahead with full-fledged springtime commencement exercises as usual, with tweaks to account for health concerns. SENT: 910 words, photos. 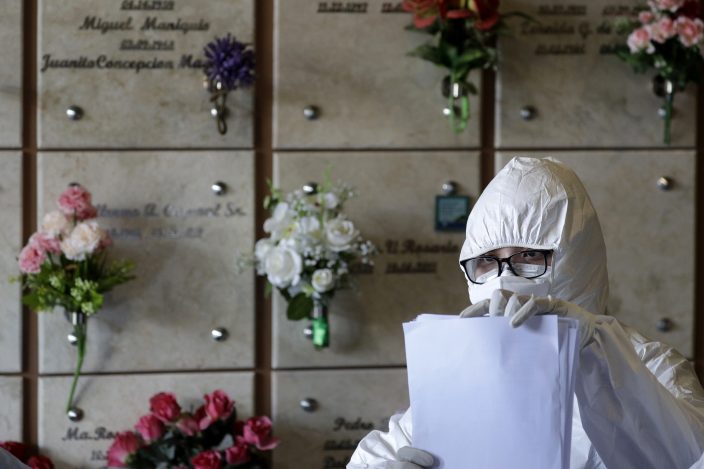 A health worker wearing a protective suit arranges papers as they conduct a random rapid testing for COVID-19 inside a columbarium at the Immaculate Conception Cathedral of Cubao complex in Metro Manila, Philippines on Wednesday, May 20, 2020. (AP PhotoAaron Favila)

VIRUS OUTBREAK-BRAZIL-AMAZON — As COVID-19 reaches remote indigenous lands in Brazil’s Amazon, the government agency responsible for protecting native people brushes off calls for action, focusing instead on waging ideological battles, according to agents from the institution itself and others. SENT: 1,140 words, photos.

GROUND GAME — AP’s coronavirus podcast, “Ground Game: Inside the Outbreak,” today is about how the entertainment industry has been reshaped by the pandemic, from the launch of drive-in concerts to the possibility of imposing of physical distancing measures in movie theaters. Listen to the podcast at https://appodcasts.com/category/ground-game/. Embed code is available on AP Coverage Plan.

A separate wire advisory has been sent outlining the AP’s complete coronavirus coverage.

ELECTION 2020-BIDEN — Joe Biden deflects questions about Trump’s allegations of improper behavior during the Obama administration and other conspiracy theories pushed by his top allies, saying, “I don’t want to get down in the mud with these guys.” SENT: 500 words, photo.

ELECTION-2020-OREGON-PRIMARY — Republican voters in Oregon’s vast 2nd Congressional District elect a former state senator to be their candidate to replace Rep. Greg Walden, who didn’t run for a 12th term in the conservative region covering the rural eastern and central part of the state. SENT: 400 words, photo.

MIDWEST-FLOODING — Rapidly rising water overtakes dams and forces the evacuation of about 10,000 people in central Michigan, where the governor says one downtown could be “under approximately 9 feet of water” by Wednesday. SENT: 800 words, photos, video.

ISRAEL-PALESTINIANS — Palestinian President Mahmoud Abbas says the Palestinian Authority will no longer be committed to any signed agreements with Israel or the United States, following Israel’s pledge to annex large parts of the occupied West Bank. SENT: 420 words, photos.

CANADA-TERRORISM-CASE — A teenager accused of stabbing a woman to death at a Toronto massage parlor is now also charged with terrorism after police said they uncovered evidence the attack was inspired by an online community of sexually frustrated men. SENT: 330 words.

TAIWAN-POLITICS — Taiwanese President Tsai Ing-wen calls for stability in relations with China in her inaugural address but says she would not accept Beijing’s political terms that would “downgrade Taiwan and undermine the cross-strait status quo.” SENT: 850 words, photos.

BURUNDI-ELECTION — A crucial election begins in the East African nation of Burundi, where President Pierre Nkurunziza is stepping aside after a divisive 15-year rule but will remain “paramount leader” in the country that continues to reject outside scrutiny. SENT: 530 words.

FINANCIAL-MARKETS — Asian shares were mixed as market players waffled between hopes for recovery as economies gradually reopen and worries over the havoc wreaked by the pandemic. By Business Writer Yuri Kageyama. SENT: 850 words, photos.