Eddie Sutton waited so long to be inducted into the Naismith Memorial Basketball Hall of Fame. He couldn't hang on long enough to make it to the ceremony.

The man who led three teams to the Final Four and was the first coach to take four schools to the NCAA Tournament, died Saturday. He was 84.

Sutton’s family said in a statement he died of natural causes at home in the Tulsa, Oklahoma, area, surrounded by his three sons and their families. His wife, Patsy, died in 2013. 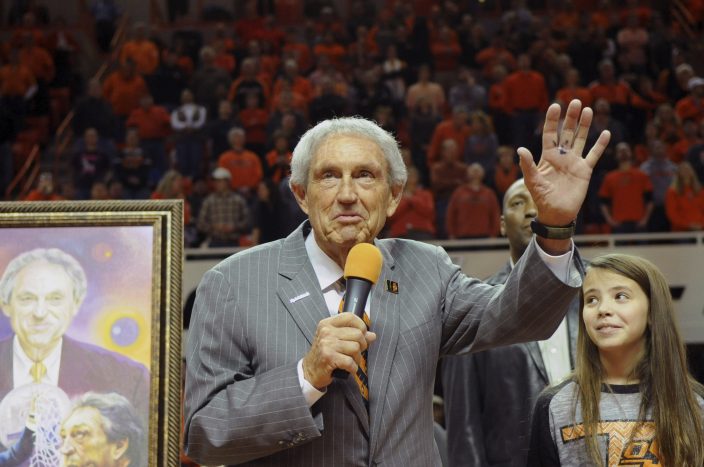 FILE - In this Monday, Feb. 3, 2014, file photo, Eddie Sutton, head coach at Oklahoma State between 1990-2006, is honored at halftime of the Oklahoma State basketball game against Iowa State in Stillwater, Okla. Sutton, the Hall of Fame basketball coach who led three teams to the Final Four and was the first coach to take four schools to the NCAA Tournament, died Saturday, May 23, 2020. He was 84. (AP PhotoBrody Schmidt, File)

“Dad and Mom treated their players like family and always shared the belief that his teachings went beyond the basketball court,” the family wrote. “He cherished the time he spent at every school and appreciated the support of their loyal fans. He believed they deserved so much credit in the success of his programs.”

Elected to the Naismith Memorial Basketball Hall of Fame on April 3, Sutton fell short as a finalist six times before finally being selected. He had said he believed that a scandal that ended his stint at Kentucky was likely the culprit for his lengthy wait. The NCAA announced 18 allegations against the program in 1988, and he resigned in 1989.

He certainly had a worthy resume. He was 806-328 in 37 seasons as a Division I head coach — not counting vacated victories or forfeited games -- and made it to 25 NCAA Tournaments. He led Final Four squads at Arkansas in 1978 and Oklahoma State in 1995 and 2004. He took Creighton, Arkansas, Kentucky and Oklahoma State to the NCAA Tournament. He was Associated Press Coach of the Year in 1978 at Arkansas and in 1986 at Kentucky. 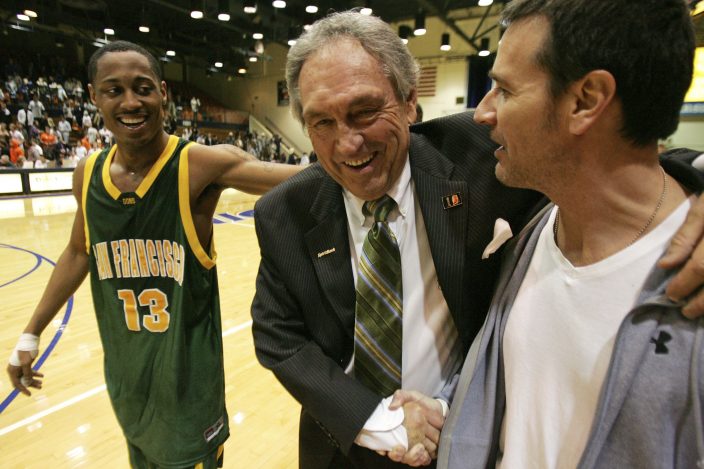 FILE - In this Saturday, Feb. 2, 2008, file photo, San Francisco head coach Eddie Sutton shakes the hand of Terry Anzaldo as Myron Strong, left, smiles after San Francisco defeats Pepperdine 88-85 in an NCAA college basketball game to give Sutton his 800th win, in Malibu, Calif. Sutton, the Hall of Fame basketball coach who led three teams to the Final Four and was the first coach to take four schools to the NCAA Tournament, died Saturday, May 23, 2020. He was 84. (AP PhotoJeff Lewis, File)

“Eddie Sutton was a fascinating and complicated person,” Chapman wrote in a tweet. “He also was an unbelievable teacher of the game of basketball. I was fortunate and lucky to have learned from him. Grateful.”

Sutton's retirement at Oklahoma State in 2006 came roughly three months after he took a medical leave following a traffic accident that resulted in charges of aggravated DUI, speeding and driving on the wrong side of the road. He pleaded no contest to the charges, received a one-year deferred sentence and was ordered to pay a fine. 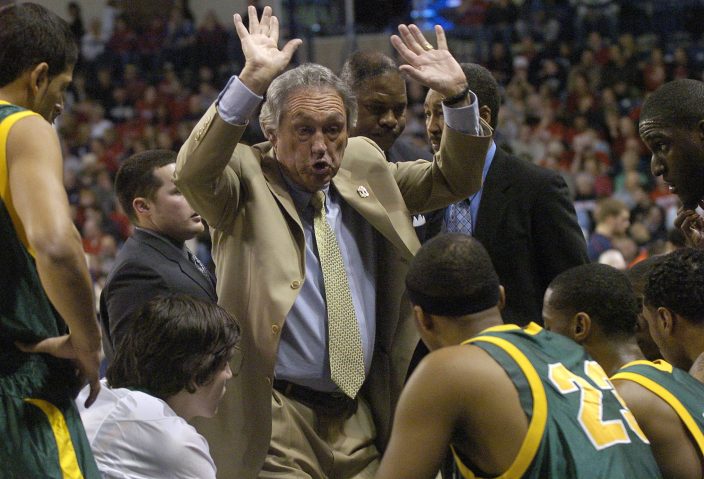 FILE - In this Monday, Jan. 21, 2008, file photo, San Francisco basketball coach Eddie Sutton talks with his team in the first half of an NCAA college basketball game against Gonzaga, in Spokane, Wash. Sutton, the Hall of Fame basketball coach who led three teams to the Final Four and was the first coach to take four schools to the NCAA Tournament, died Saturday, May 23, 2020. He was 84. (AP PhotoIngrid Barrentine, File)

Through it all, he remained wildly popular at Oklahoma State, often attending games while confined to a wheelchair. He would receive loud cheers as the camera panned to him and Aloe Blacc’s “The Man” played over the sound system.

“Oklahoma State University is deeply saddened by the passing of Coach Eddie Sutton,” Oklahoma State president Burns Hargis said in a statement. “A Hall of Fame Coach with more than 800 wins, he revived our historic basketball program and will always be revered and loved by the Cowboy family. Our thoughts and prayers are with the entire Sutton family.”

Even rivals had the highest respect for Sutton. 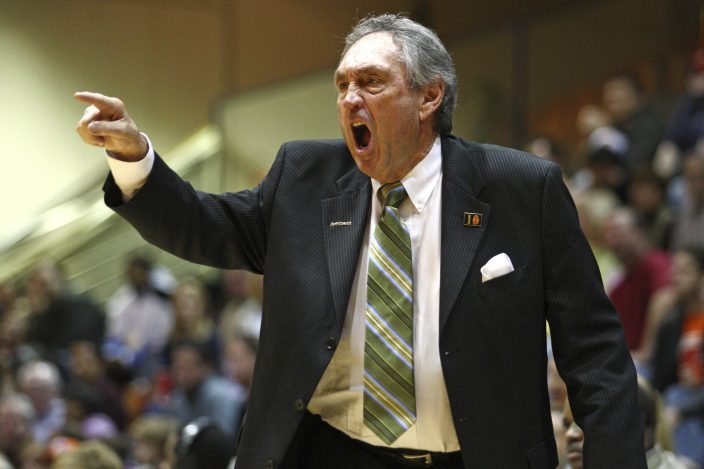 FILE - In this Saturday, Feb. 2, 2008, file photo, San Francisco head coach Eddie Sutton coaches against Pepperdine during the second half of an NCAA college basketball game in Malibu, Calif. USF won 88-85 to give Sutton his 800th win. Sutton, the Hall of Fame basketball coach who led three teams to the Final Four and was the first coach to take four schools to the NCAA Tournament, died Saturday, May 23, 2020. He was 84. (AP PhotoJeff Lewis, File)

“Seems like just a few days ago we were celebrating the news that Coach Eddie Sutton had been elected to the Basketball Hall of Fame,” Oklahoma athletic director Joe Castiglione said in a Tweet. “Now this very sad news of his passing. So grateful I had a chance to get to know him & his family. Thinking about Steve, Sean & Scott. RIP Coach.”

Sutton was born in Bucklin, Kansas, in 1936. He played at Oklahoma State under Hall of Fame coach Henry Iba, then stayed there to begin his coaching career as an assistant under Iba in 1958.

Sutton got his first Division I head coaching job at Creighton. He led the Bluejays to an 82-50 mark in five seasons from 1969 to 1974.

He took over at Arkansas in 1975, and the Razorbacks went 17-9 and 19-9 before beginning a nine-year stretch of 20-win seasons. He finished his run in Fayetteville nine straight trips to the NCAA basketball tournament. His 1978 Final Four squad featured versatile stars Sidney Moncrief, Marvin Delph and Ron Brewer.

Sutton left his mark at Arkansas — the practice gym there is named for him. Former President Bill Clinton, who was the governor of Arkansas for part of Sutton's run there, once sent a video message for a ceremony honoring Sutton at Arkansas in 2016.

“Your time as coach was a defining era in Razorback basketball," Clinton said. “You put our program on the map. You helped mold a generation of student-athletes into winners on the court and after they left. You made us think we could win again.”

Sutton moved on and replaced Joe B. Hall at Kentucky in 1985. While there, he compiled a 90-40 record, including two Southeastern Conference titles. But he slumped at the end, and his program endured NCAA scrutiny.

He led Oklahoma State from 1991 to 2006. The Cowboys reached the Sweet Sixteen his first two seasons as head coach. In 1995, Bryant Reeves and Randy Rutherford led the Cowboys to the 1995 NCAA Final Four. The Cowboys made it back to the Final Four in 2004, with Tony Allen and Joey Graham leading the way.

Sutton’s final coaching stint came in 2007-08 as interim coach at San Francisco, where he earned his 800th win.