The first astronauts launched by SpaceX are breaking new ground for style with hip spacesuits, gull-wing Teslas and a sleek rocketship — all of it white with black trim.

The color coordinating is thanks to Elon Musk, the driving force behind both SpaceX and Tesla, and a big fan of flash and science fiction. 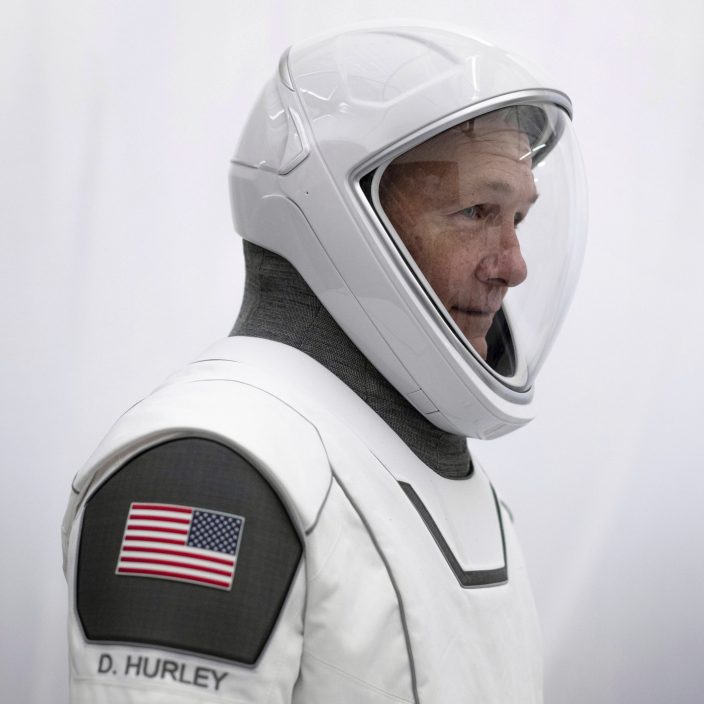 This undated photo made available by SpaceX shows NASA astronaut Doug Hurley in his spacesuit at SpaceX headquarters in Hawthorne, Calif. On Wednesday, May 27, 2020, Hurley and Bob Behnken are scheduled to pilot a SpaceX Dragon capsule to the International Space Station. It will be the first astronaut launch from NASA’s Kennedy Space Center since the last shuttle flight in 2011. (Ashish SharmaSpaceX via AP)

“It is really neat, and I think the biggest testament to that is my 10-year-old son telling me how cool I am now,” Hurley told The Associated Press.

“SpaceX has gone all out" on the capsule's appearance, he said. "And they’ve worked equally as hard to make the innards and the displays and everything else in the vehicle work to perfection.”

The true test comes Wednesday when Hurley and Behnken climb aboard a SpaceX Dragon capsule atop a SpaceX Falcon 9 rocket and, equipment and weather permitting, shoot into space. It will be the first astronaut launch from NASA’s Kennedy Space Center since the last shuttle flight in 2011. 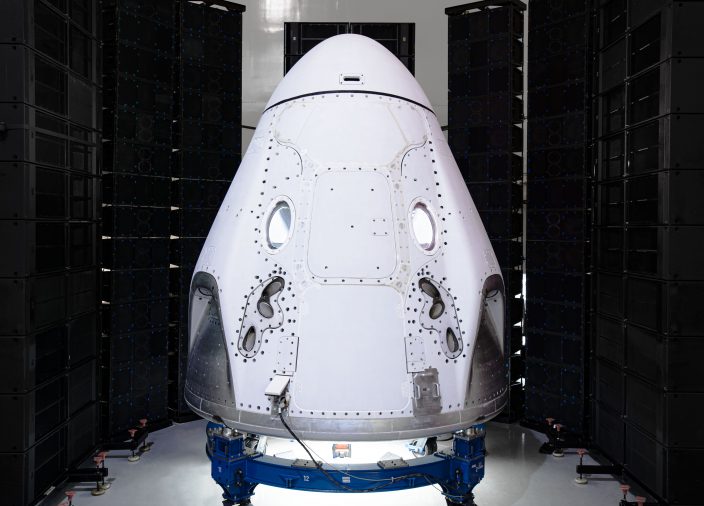 This February 2020 photo shows the SpaceX Crew Dragon capsule after its arrival to the Kennedy Space Center in Cape Canaveral, Fla. (SpaceX via AP)

It will also mark the first attempt by a private company to send astronauts into orbit. Only governments — Russia, the U.S., and China — have done that.

The historic send-off deserves to look good, according to SpaceX. It already has a nice ring. Musk named his rocket after the “Star Wars” Millennium Falcon. The capsule name stems from “Puff the Magic Dragon,” Musk’s jab at all the doubters when he started SpaceX in 2002.

SpaceX designed and built its own suits, which are custom-fit. Safety came first. The cool — or wow — factor was a close second. 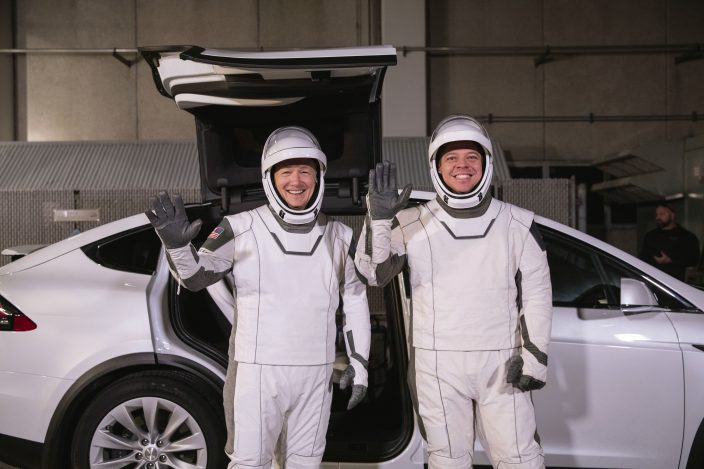 In this Friday, Jan. 17, 2020 photo made available by NASA, astronauts Doug Hurley, left, and Robert Behnken pose in front of a Tesla Model X car during a SpaceX launch dress rehearsal at Kennedy Space Center in Cape Canaveral, Fla. The NASA astronauts rode to the pad in the electric vehicle made by Elon Musk's company. (Kim ShiflettNASA via AP)

“It’s important that the suits are comfortable and also are inspiring,” explained SpaceX’s Benji Reed. a mission director. “But above all, it’s designed to keep the crew safe.”

The bulky, orange ascent and entry suits worn by shuttle astronauts had their own attraction, according to Behnken, who like Hurley wore them for his two previous missions. Movies like “Armageddon” and “Space Cowboys” stole the orange look whenever actors were “trying to pretend to be astronauts.”

On launch day, Hurley and Behnken will get ready inside Kennedy’s remodeled crew quarters, which dates back to the two-man Gemini missions of the mid-1960s. SpaceX techs will help the astronauts into their one-piece, two-layer pressure suits. 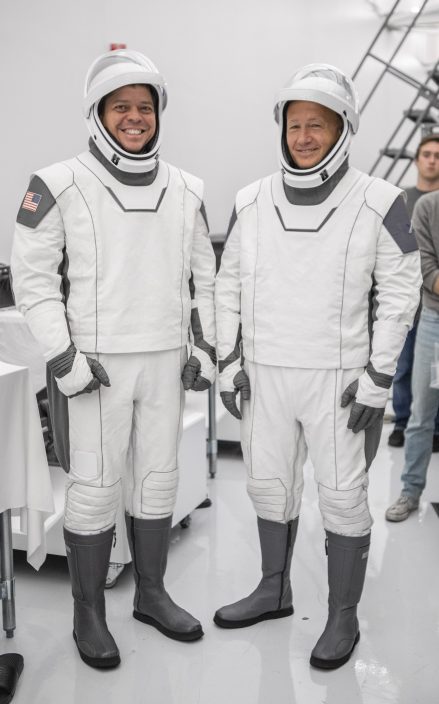 This July 31, 2019 photo made available by SpaceX shows astronauts Bob Behnken, left, and Doug Hurley in Hawthorne, Calif., during a joint training event between NASA and SpaceX. Following crew suit-up, the crew ingressed the capsule simulator in Hawthorne, Calif., as they would on launch day, and the teams performed a simulated launch countdown and several emergency egress scenarios. SpaceX designed and built its own suits, which are custom-fit. (SpaceX via AP)

But instead of the traditional Astrovan, the two will climb into the back seat of a Tesla Model X for the nine-mile ride to Launch Complex 39A, the same pad used by the moonmen and most shuttle crews. It's while they board the Tesla that they'll see their wives and young sons for the last time before flight.

Making a comeback after three decades is NASA’s worm logo — wavy, futuristic-looking red letters spelling NASA, the “A” resembling rocket nose cones. The worm adorns the Astro-Tesla, Falcon and even the astronauts' suits, along with NASA’s original blue meatball-shaped logo. 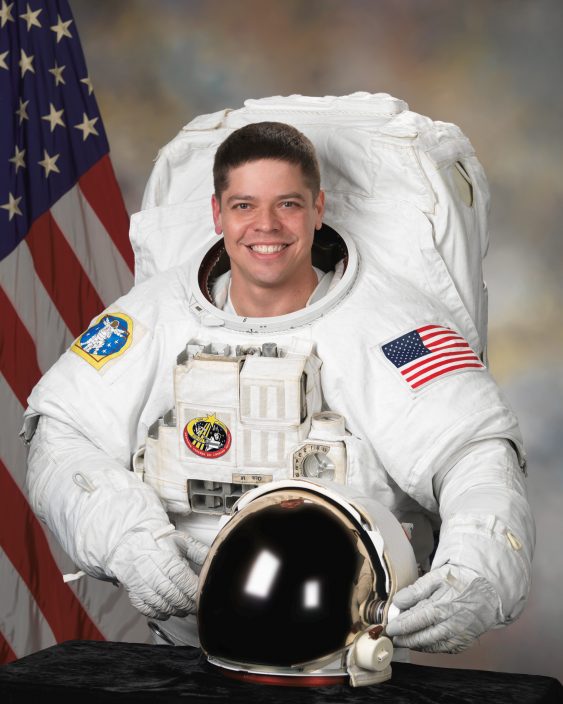 This October 2007 photo made available by NASA shows astronaut Bob Behnken in an Extravehicular Mobility Unit suit used for spacewalks. (NASA via AP)

The white-suited Hurley and Behnken will transfer from the white Tesla to the white Dragon atop the equally white Falcon 9.

“It’s going to be quite a show,” Reed promised. FILE - In this Dec. 21, 1968 file photo, Apollo 8 astronauts, suited up and ready to go, walk to a van heading for their Saturn V rocket for their moon orbit mission from Cape Kennedy, Fla. Leading the way is Commander Frank Borman, followed by James A. Lovell and William A. Anders. (AP Photo) 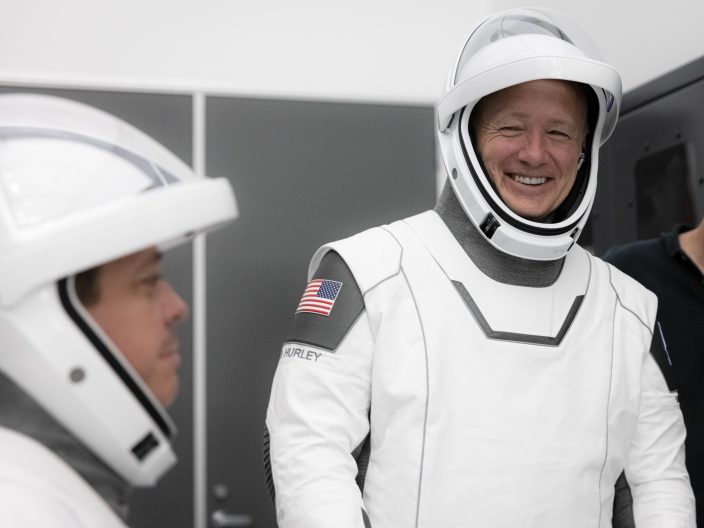 This Thursday, March 19, 2020 photo made available by SpaceX shows NASA astronauts Bob Behnken and Doug Hurley during flight simulator testing at the Kennedy Space Center in Cape Canaveral, Fla., with SpaceX teams in Firing Room 4 at NASA's Kennedy Space Center, SpaceX's Mission Control in Hawthorne, Calif., and NASA flight controllers in Mission Control Houston, for a full simulation of launch and docking of the Crew Dragon spacecraft. (SpaceX via AP) 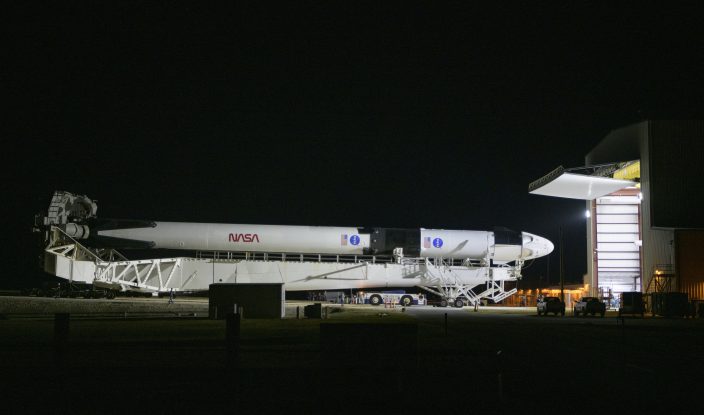 A SpaceX Falcon 9 rocket with the company's Crew Dragon spacecraft is rolled out of the horizontal integration facility at Launch Complex 39A as preparations continue for the Demo-2 mission, Thursday, May 21, 2020, at NASA's Kennedy Space Center in Cape Canaveral, Fla. (Bill IngallsNASA via AP)

Ellie Goulding’s fourth album is a ...

Despite coronavirus, 1 musical is holding auditions, on ...

Most theaters in America may be cl ...