The president of the Spanish soccer league said Sunday the competition could restart as early as June 11 with the Seville derby between Sevilla and Real Betis.

Javier Tebas made the announcement a day after Spanish Prime Minister Pedro Sánchez said that the league would be allowed to resume from June 8 as long as the country continued to keep the coronavirus outbreak in check.

“It will depend on how the training progresses, but hopefully it will be possible to restart with our first match on Thursday, June 11,” Tebas said in his weekly Sunday night interview with league broadcaster Movistar. 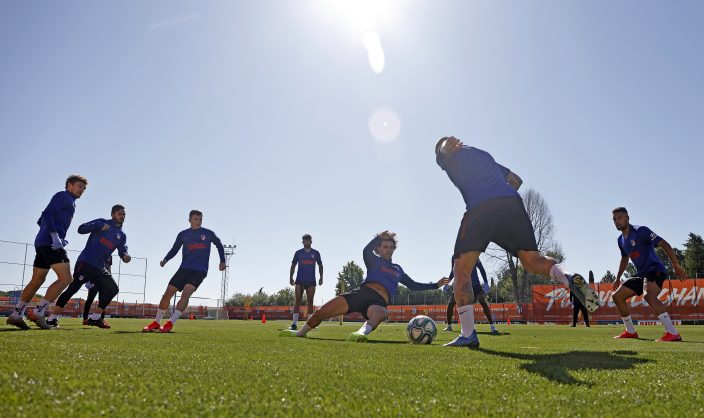 In this photo provided by Atletico Madrid, team players take part in the first group training session in Madrid, Spain, on Monday May 18, 2020. All Spanish league clubs can begin group training sessions this week despite stricter lockdown restrictions remaining in place in parts of Spain because of the coronavirus pandemic. (Atletico de Madrid via AP)

Tebas said the popular Seville derby in the top tier would be a good way to mark the return to competition and “honor those who have lost their lives” during the pandemic in Spain with more than 28,000 deaths.

Teams will be allowed to train with groups of 14 players beginning on Monday, up from 10 players the past week. Full squad sessions are scheduled for upcoming weeks.

Tebas said it remains impossible to guarantee the June 11 start date because the decision ultimately depends on how the pandemic progresses. He said all teams must go through all the phases already established in the league’s return-to-training protocol, but there could be different confinement measures in place for different regions of the country.

Tebas made a call for all players to keep complying with the confinement rules still in place in Spain after four Sevilla players broke them this weekend. Franco Vázquez, Luuk de Jong, Lucas Ocampos and Ever Banega were seen together with several other people in a gathering, with photos put on social media.

All four players published statements in which they apologized, and the club posted images of their apologies on its Twitter account.

Tebas did not say whether the players would be punished but noted that it was important that they apologized. He said players have “to be careful and show responsibility” because they risked damaging football overall.

Tebas said the schedule for the first four rounds after the league resumes is expected to be announced in early June.

He said kickoff times will take high temperatures into account. The Sevilla-Betis game is expected to start at 10 p.m. local time (2000 GMT).

Spain's top tier has 11 rounds left. Barcelona is top with a two-point lead over Real Madrid.

The head of the Medicare and Medic ...

With virtual fans and daily matches, soccer returns to Spain

Full squad training resumes in Spain ahead of soccer restart

Liga to resume with Real Madrid playing at training center

Spanish clubs now allowed to train with groups of 14 players

All league teams cleared to start group training in Spain