It wasn't the same.

The grandstands were empty. Track organizers only allowed a few crew members per team to comply with Indiana's social gatherings limit. Gabe Wilkins even brought a car with the freshly painted word “covid" next to his No. 19. 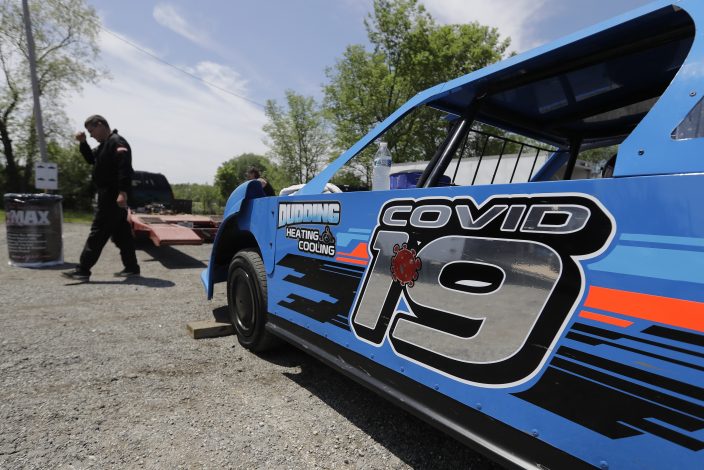 And despite being on center stage with nearby Indianapolis Motor Speedway still silent, everyone sensed something was missing. Seventy-five miles away, the Indianapolis 500 was devoid of a crowd, the singing of “Back Home Again in Indiana," even A.J. Foyt on its traditional race day.

“I went to my first Indianapolis 500 in 1969, and I love the 500," track promoter Jerry Gappens said. “So it sure hasn't felt like Memorial Day weekend. We're not the Indianapolis 500 but at least we have racing and that's a good sign."

Dirt tracks, like this one in northeastern Indiana, have served as the lifeblood of automobile racing for decades. Some of the sports biggest stars began their careers at places like Gas City, rolling cars off haulers and working with family members in parking lots to solve problems. 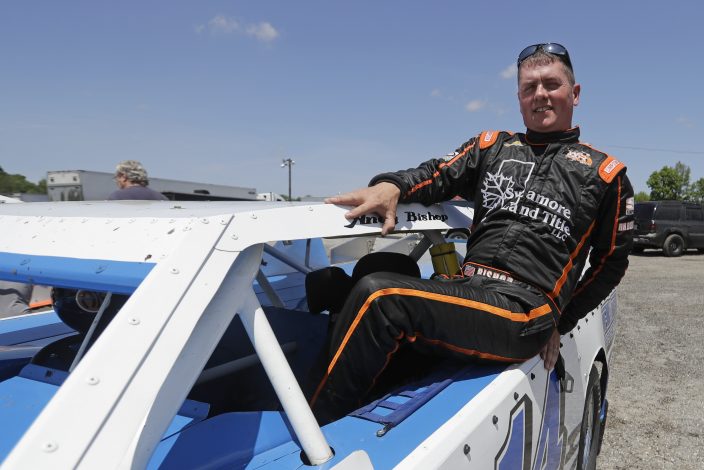 Andy Bishop climbs out of his car following a practice session at Gas City I-69 Speedway, Sunday, May 24, 2020, in Gas City, Ind. On a day usually reserved for IndyCar's crown jewel race, Gas City I-69 Speedway an hour's north of Indianapolis had a handful of cars on a short dirt track. (AP PhotoDarron Cummings)

Now, with the sports world revving up again, these sorts of venues could become a central component in establishing how to put fans back in the stands.

Leisure sports are leading the way with golf courses rapidly reopening, celebrity foursomes becoming all the rage and outdoors sports such as fishing, hiking and cycling surging in popularity as state's relax stay-at-home orders.

One reason people flock to those sports today is that social distancing can be more easily achieved in non-contact outdoor sports. 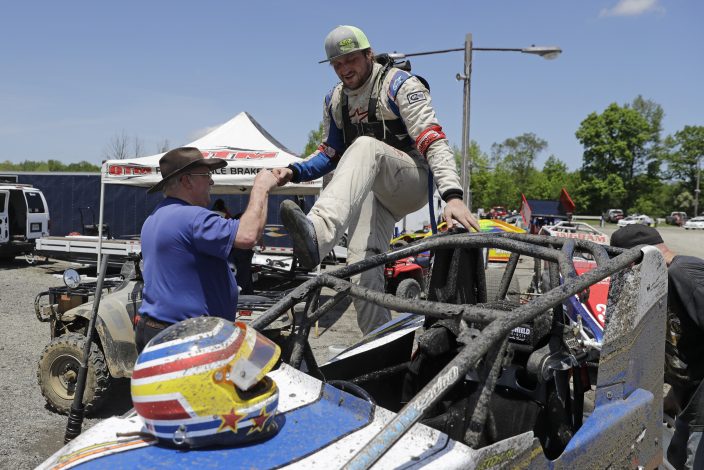 Cole Ketchum climbs into his car before a practice session at Gas City I-69 Speedway, Sunday, May 24, 2020, in Gas City, Ind. (AP PhotoDarron Cummings)

But as Americans look for additional options to get out of their homes amid the global pandemic, automobile racing offers a unique position because spacious speedways can get fans into the track while keeping them spread apart.

The already strict safety requirements in place for teams helped NASCAR return to action last week and three Cup races already have been run, all without fans. IndyCar plans to open its season June 6 at Texas, also without fans.

Short tracks play a part, too. 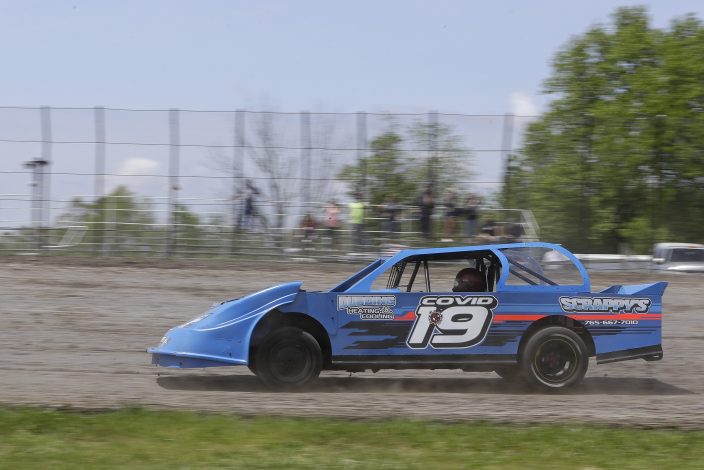 Gabe Wilkins drives his car during a practice session at Gas City I-69 Speedway, Sunday, May 24, 2020, in Gas City, Ind. (AP PhotoDarron Cummings)

National Speedway Directory publisher Tim W. Frost estimates that of the 100,000 oval drivers, most weekend warrior types, compete on approximately 1,200 race tracks around the U.S. and Canada. Some are already experimenting.

Organizers insist they're going strictly by the book with limited ticket sales and the implementation of social distancing. 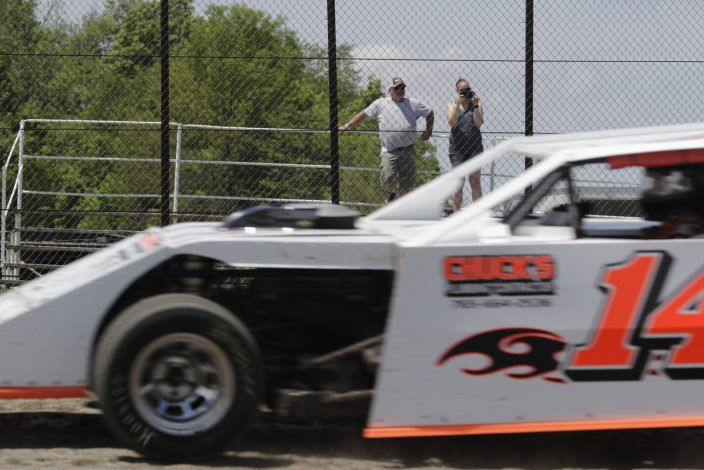 “We’ll go where we can go and do it as safely as we can," said Chris Dolack, the Outlaws' director of public relations. “I know we’re Outlaws but we’re not going to go somewhere and break some law."

That didn't make drivers like 28-year-old Cole Ketcham and 42-year-old Andy Bishop happy, and it didn't help Gappens, who has already lost about 40% of his events. Recouping the money will be tough. 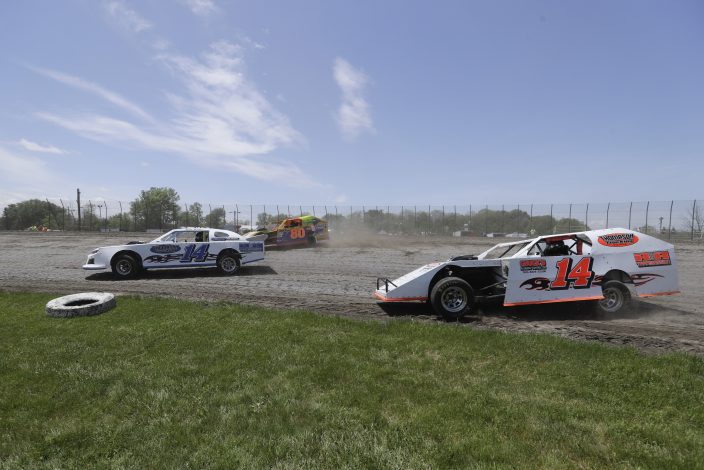 Drivers steers the cars out of turn four during a practice session at Gas City I-69 Speedway, Sunday, May 24, 2020, in Gas City, Ind. (AP PhotoDarron Cummings)

Not surprisingly, the two drivers were near the front of the line when it started forming 90 minutes before the track opened for three two-hour test sessions and were happy to find themselves the center of attention.

“We’re pretty much not in the spotlight any other day of the week, so why not?” Ketcham said. “All I’ve been doing is getting ready to race this season. It feels like it’s been about two offseasons now.”

If the state's five-stage plan proceeds as hoped, Indy could host the first major events in front of crowds — three races including the Brickyard 400 scheduled for July 4-5. 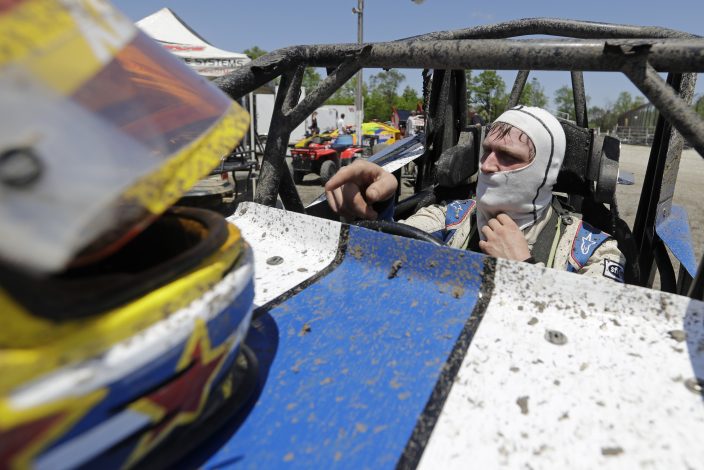 Cole Ketchum waits in his car before a practice session at Gas City I-69 Speedway, Sunday, May 24, 2020, in Gas City, Ind. (AP PhotoDarron Cummings)

It would be a stark contrast to Sunday when five IndyCar drivers biked around the 2.5-mile oval.

Chip Ganassi Racing teammates Marcus Ericsson and Felix Rosenqvist, both of Sweden, took it a step further by waking up early and cycling 20 miles to speedway on a warm, sunny, quiet morning without much traffic. Ericsson enjoys cycling so much he rides three times a week and made a four-hour jaunt Friday, the day Indy usually holds its final practice.

He'd rather be doing his job.

“It's strange, especially when the weather is perfect. It's a perfect day for the 500," Ericsson said. “It's sad in a way, but it's still nice to be here.”

He expects to return for IndyCar's July 4 race on Indy's road course and definitely plans to be back for the rescheduled 500 on Aug. 23.

But until the fans return, nothing's going to feel normal.

“I guess you can run the scenarios though your mind but until you run through that situation (without fans) you don’t know," Bishop said. “The thrill of victory is to hear the hoots and hollers and boos from the fans. That to me is worth more than trophy."