Chris “Pops” Bowyer sat in a lawn chair wearing a plain white T-shirt and drinking a beer alongside wife Jana and their friends outside of their motorhome a few hundred yards from Charlotte Motor Speedway.

Bowyer knew he wasn't getting into the Coca-Cola 600 on Sunday to see his Cup driver son Clint race, but decided to make the trek from Kansas to be close to the action.

“Well, we're here,” said Bowyer, while dog Hank laid on the grass near his feet. “The kid is racing, so we're here.” 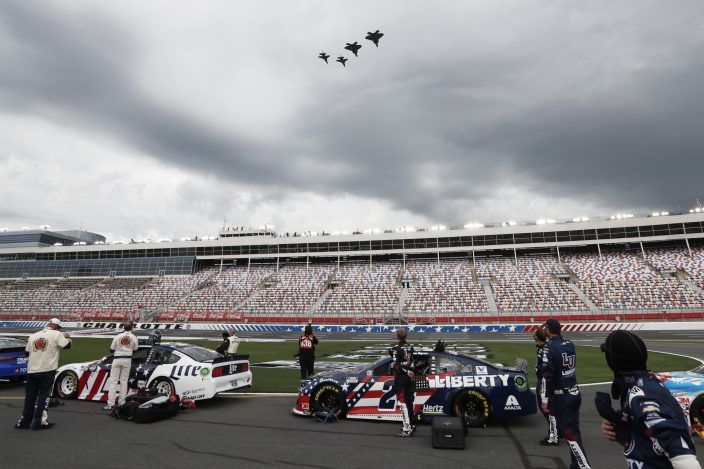 Added Clint's mother, Jana: “We don't like it. We'd like to be in there where we could watch, but we can't.”

Jana Bowyer certainly isn't alone in those feelings. But due to the coronavirus pandemic, NASCAR isn't allowing spectators into its races until further notice. The only people to see the race were those working it and those who live in the turn one condominiums at the track.

But the Bowyers came anyway, taking up temporary residence in Jerome Little's Route 29 Pavilion RV campground and entertainment center located just across the street from the speedway. It was dual purpose trip for the Bowyers: they wanted to spend time with an old friend who is suffering from amyotrophic lateral sclerosis (Lou Gehrig's disease) and also wanted to be there to support their son. 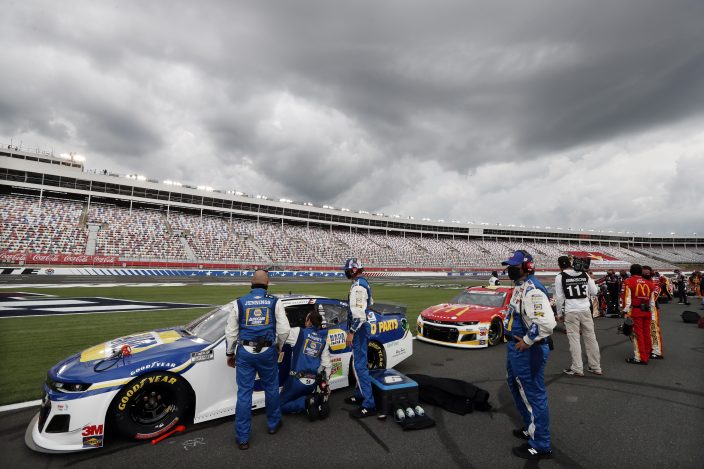 Because the campground property isn't owned by CMS, Little was allowed to host those in motorhomes while still encouraging social distancing.

In a normal year he hosts approximately 175 motorhomes and two acres of cars on his property. On Sunday there were only a handful of cars in the lot, and those were owned by members of the media. But there were 33 motorhomes on his properties, with race fans traveling from as far away as New York, Texas and Maine.

“These fans are dedicated and they've come from all over the country,” Little said. 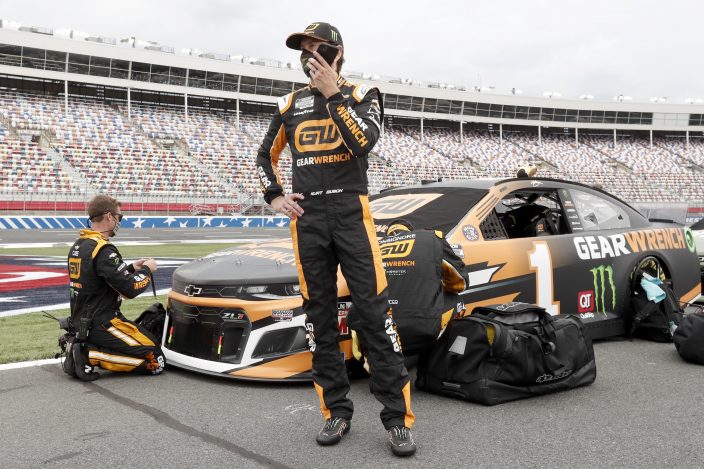 Kurt Busch talks on his phone before the start of the NASCAR Cup Series auto race at Charlotte Motor Speedway Sunday, May 24, 2020, in Concord, N.C. (AP PhotoGerry Broome)

Like many around the country, Little has taken a financial hit due to fans being shut out of sports, but the third-generation owner of the campground said, “honestly, I feel just terrible for the race fans."

If you didn't know better, you'd never know one of NASCAR's most popular races was in town.

Considered the series' “crown jewel race,” CMS has attracted more than 100,000 fans to the event which began in 1960. But on Sunday it was eerily quiet, resembling a ghost town rather than the epicenter of the NASCAR world.

Bruton Smith Boulevard, which is normally bustling with cars on race day, was virtually empty except for an occasional passing car or truck.

Absent were the hundreds of North Carolina State Troopers who line the entrance ways to the track and the vendors selling NASCAR t-shirts, hats and flags. There were no pedestrians crossing the walkways, no bands blasting music outside the track, contributing to an eerily quiet atmosphere. All Charlotte Motor Speedway-owned campgrounds were closed and vacant.

The Coca-Cola 600 promotional signs that normally adorn from the front of restaurants during race week were non-existent. Restaurants like Hooters, Twin Peaks and Iron Thunder Saloon, which are typically packed on race day, were half empty just two days after the state entered “phase two” of its coronavirus recovery plan, allowing them to open at 50 percent capacity with plenty of restrictions.

“Usually we would be packed out with NASCAR fans," said Mindy Segovia, the general manager of Iron Thunder Saloon, about a mile from the track. ”I figured that fans would go the racetrack and hang out outside of the track, but they are not allowing that either. So we're losing a lot of money."

Mike Dishong wasn't planning on making the trip to Solomons Island, Maryland, after learning fans wouldn't be allowed to attend the race.

But when his 7-year-old grandson Carson, who lives a few miles from the track, pleaded with his grandparents on FaceTime last week to come down to Charlotte anyway and watch the race on TV and listen to the roar of the engines from Little's campground, he and his wife Peggy couldn't refuse.

“That's what racing is about — family, friends and being together,” Dishong said. “It brought us together even though we're not going to be inside the track. We're having fun.”

She's sad that son Clint won't have the support of his family inside the track.

“He hates that his family can't come, his wife and kids,” Jana Bowyer said. “And that goes for all of the fans, too. That's part of his racing day is meeting with the fans, shaking hands and signing autographs. So everybody is missing out on that."

Added Chris Bowyer: “When the driver's families can't come, that's tough. We're here to support him. This is a dangerous sport, and things happen.”