When he launched his presidential campaign, such overtures to Republicans were central to Biden's promise to “unify the country” and “restore the soul of the nation” after defeating President Donald Trump.

Now that he's the presumptive Democratic nominee, Biden is sharpening his tone, still pitching consensus but touting a “bold agenda” aimed at mollifying progressives who remain skeptical he will deliver enough on health care, student loan debts and the climate crisis. 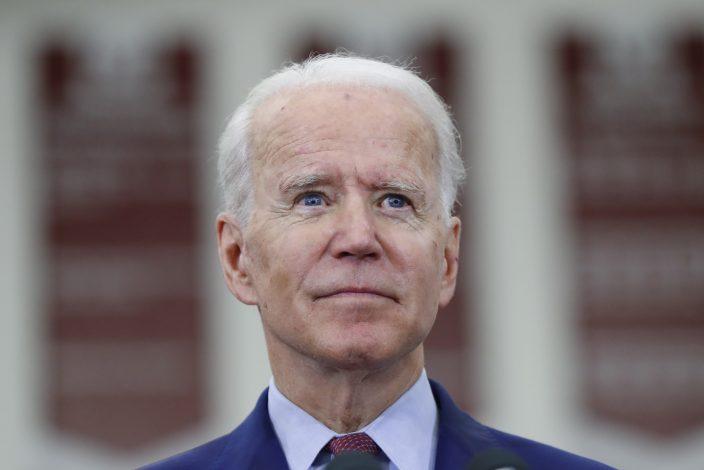 The idea is to avoid repeating the party’s 2016 defeat, when Hillary Clinton struggled to unite her moderate supporters and backers of Bernie Sanders. The dynamics are different in 2020, with Democrats united in their antipathy toward Trump. But Biden's juggling of the left wing along with mainstream Democrats and independents and Republicans disgruntled with Trump could end up as an unsuccessful attempt to be all things to all people.

“It certainly seems like the approach that they’re taking right now is trying to have it both ways,” said Evan Weber, a co-founder of the Sunrise Movement, a climate action youth organization that is among the political groups working with the Biden campaign on policy proposals.

For younger voters, Weber added, “Going too far in the direction of trying to appeal to a moderate narrative or a bipartisan era that most people in our generation have never experienced ... is not going to inspire a lot of confidence.” 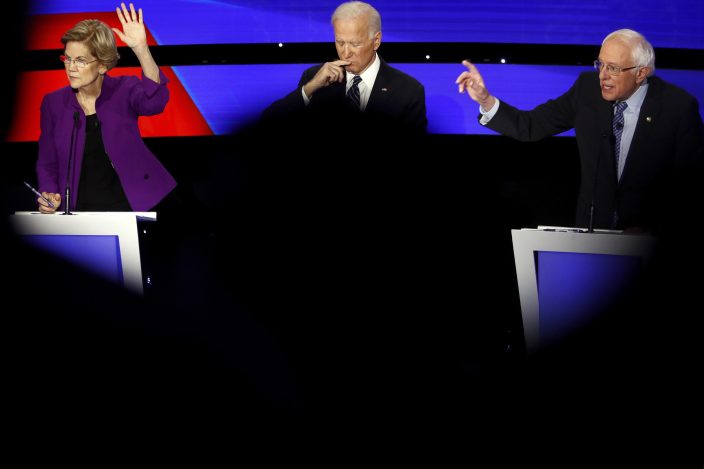 FILE - In this Jan. 14, 2020, file photo Democratic presidential candidate Sen. Elizabeth Warren, D-Mass., and Sen. Bernie Sanders, I-Vt., raise their hands to answer a question as Joe Biden pauses during a Democratic presidential primary debate hosted by CNN and the Des Moines Register in Des Moines, Iowa. Biden's juggling of the left wing along with mainstream Democrats and independents and Republicans disgruntled with Trump could end up as an unsuccessful attempt to be all things to all people. (AP PhotoPatrick Semansky, File)

“You’ve got to run on who you are,” Ayres said. “If he becomes a politician of the left, it’s going to hurt his ability to consolidate the 54% of Americans who voted for someone other than Donald Trump in 2016.”

Biden deflects the risks. Asked whether his recent moves mean he’ll govern as a “progressive,” Biden retorted on CNBC: “I’m going to be Joe Biden. Look at my record.”

Recent interviews and campaign events reveal the nuances Biden hopes can attract support in both directions. “I think health care is a right, not a privilege,” he said on CNBC, espousing an article of faith for the left. But, he added, “I do not support Medicare for All” single-payer insurance.

Biden embraces some key principles of the Green New Deal sweeping climate plan as paths to “tens of millions of new jobs,” but casts as impossible some progressives’ goal of zeroing out carbon pollution over a single decade. He's reaffirmed that he wants Republicans’ 2017 tax cuts repealed for the wealthiest individuals and corporations. But he prefers a 28% corporate tax rate – still lower than what it was before the cuts – and he’s not embraced a “wealth” tax on the fortunes of the richest Americans. He opposes the Keystone XL pipeline while stopping short of backing an outright ban on fracking.

The coronavirus pandemic has influenced Biden's thinking, as well.

Once a senator who championed a balanced budget amendment, he’s aligned with congressional Democrats pushing trillions of dollars in aid for states, local governments, business and individuals. And, adopting the tenor of erstwhile rivals like Sanders and Elizabeth Warren, Biden has intensified his calls to rebuild the economy to reflect progressive values, including stamping out income inequalities baked into the pre-pandemic system.

Biden aides say he’s uniquely positioned for a wide “Biden coalition” because voters prioritize experience and temperament, along with policy. The campaign defines his coalition as young, African Americans and Latinos, as well as suburban, college-educated whites, women and those disaffected by Trump.

“We do not have to make a choice between one group or another group in terms of how we are going to win this,” Biden’s campaign manager Jen O’Malley Dillon said on a recent strategy call.

Campaign co-chairman Cedric Richmond said Biden can stitch together otherwise irreconcilable parts of the electorate for one reason: Trump.

“We have a president now with no discernible political philosophy other than what benefits him,” said Richmond, a Louisiana congressman. “Even people who are not as progressive (as Biden) and people who are more progressive at least like the consistency of knowing what a person believes in.”

“We are living right now ... with the damage that can be done when a president is elected and thinks that he only has to answer to his base,” said Jennifer Horn of the Lincoln Project, which has produced online ads to help thwart Trump’s reelection.

Even if Biden prevails in November, governing might prove tougher.

The same goes for tax hikes and mega-spending energy packages the fossil fuel industry opposes. And within Biden’s personal base, labor unions whose jobs are anchored in existing energy markets haven’t embraced the sweeping alternatives.

During the primary, Biden told skeptics in his own party he’d work with Republicans “without compromising our values,” but work to “beat them” in the 2022 midterms if that failed.

Meanwhile, Weber, the Sunrise activist, argued that despite Biden's embrace of some progressive priorities, “It’s hard to teach an old dog new tricks."

Tim Miller, a former spokesman for Republican Jeb Bush’s 2016 presidential campaign and a steadfast member of the GOP’s “Never Trump” faction, said more 2016 voters in decisive battleground states shunned both Trump and Clinton for center-right alternatives in Libertarian Gary Johnson or Independent Evan McMullen than Green Party candidate Jill Stein. Winning back just that cohort back could be enough to secure Biden to the presidency alone this cycle, he said.

“I do think that there’s a concern that if he oversteps, overemphasizes a pivot to the left that could turn off certain voters who are gettable for him,” Miller said. “That’s going to be a continued tightrope through November.”

Back on the bump: New dad Cole sets sights on Yankees t ...

Getting ready for a high-profile N ...

Biden calls Trump a 'fool' for mocking masks during pandemic