The Memorial Day weekend marking the unofficial start of summer in the U.S. meant big crowds at beaches and warnings from authorities about people disregarding the coronavirus social-distancing rules and risking a resurgence of the scourge that has killed nearly 100,000 Americans.

On the Navajo Nation, which sprawls across the states of Arizona, New Mexico and Utah, the number of coronavirus cases rose by 56 on Sunday to 4,689, according to the local health department.

Meanwhile, the White House broadened its travel ban against countries hit hard by the virus, saying it would deny admission to foreigners who have recently been in Brazil. 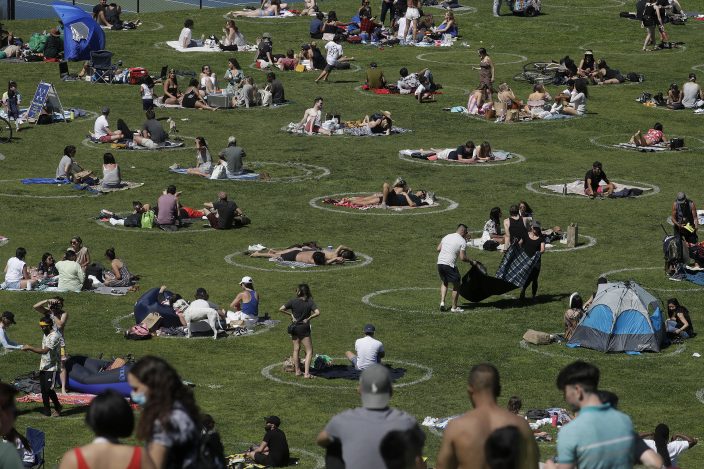 Visitors set up inside circles designed to help prevent the spread of the coronavirus by encouraging social distancing at Dolores Park in San Francisco, Sunday, May 24, 2020. (AP PhotoJeff Chiu)

Japan moved further toward reopening Monday, with Economy Minister Yasutoshi Nishimura saying that experts on a government-commissioned panel approved a plan to end the state of emergency in Tokyo and surrounding areas that has lasted for more than a month and a half.

Japan’s state of emergency has been less stringent than in European nations, mainly asking people to stay at home and for nonessential businesses to close or operate shorter hours. “Even after the state of emergency is lifted, we must firmly take preventive measures based on our new lifestyles,” Nishimura told reporters.

Millions of Australian children returned to school as the number of coronavirus patients across the country continues to fall. The states of New South Wales and Queensland joined less populous Western Australia and South Australia states and the Northern Territory in resuming face-to-face learning, instead of studying from home online. 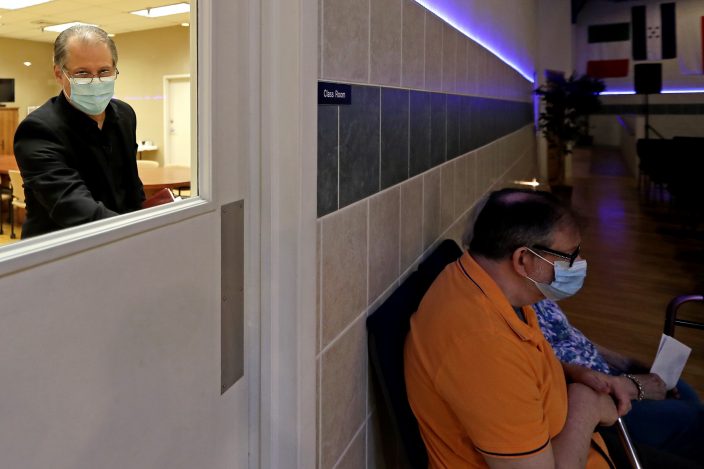 Pastor John Elleson, left, walks in as Daniel Meeks, center, and Ruth Smith wait to attend a Memorial Day service at Lakewood Chapel Church in Arlington Heights, Ill., Sunday, May 24, 2020. At a news conference Friday, Trump said state governors need to "do the right thing" and open houses of worship. Later, the CDC posted nonbonding guidance for faith institutions considering reopening, including use of masks and limiting the size of gatherings. (AP PhotoNam Y. Huh)

Queensland Premier Annastacia Palaszczuk said Monday that students and teachers had to observe one key message: Stay home if sick.

“We’re not out of the woods yet. We have to take each day as it comes, each week as it comes and we keep our fingers crossed that Queenslanders will continue to flatten that curve,” Palaszczuk said.

China reported 11 new cases of the coronavirus, 10 of them among passengers arriving from overseas in the vast Inner Mongolia region north of Beijing, according to the National Health Commission. 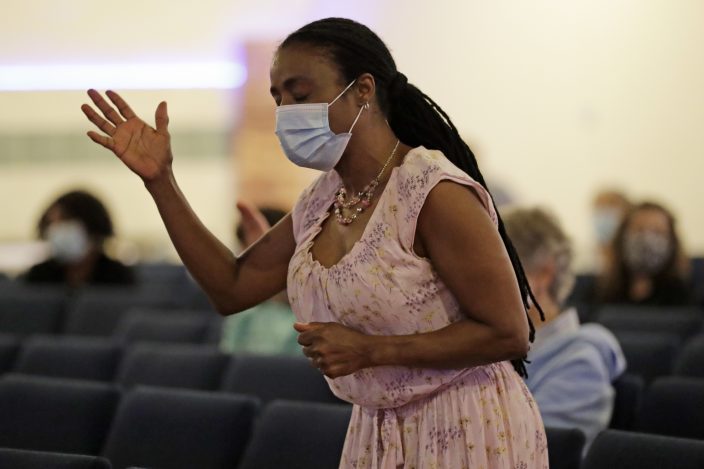 Sonia Falk prays during a Memorial Day service at Lakewood Chapel Church in Arlington Heights, Ill., Sunday, May 24, 2020. At a news conference Friday, Trump said state governors need to "do the right thing" and open houses of worship. Later, the CDC posted nonbonding guidance for faith institutions considering reopening, including use of masks and limiting the size of gatherings. (AP PhotoNam Y. Huh)

China, where the virus was first detected late last year, is holding the annual session of its ceremonial parliament, part of efforts to show that the country is returning to normal and shaking off the devastating economic efforts of having locked down tens of millions of citizens in order to contain the pandemic.

Thirteen of South Korea's new cases came from the densely populated Seoul metropolitan area, where more than 200 infections have been linked to nightclubs and other entertainment facilities. Officials shut down thousands of the outlets over the past week. The transmissions, which came amid relaxed attitudes on social distancing, have raised concern as officials proceed with a phased reopening of schools. 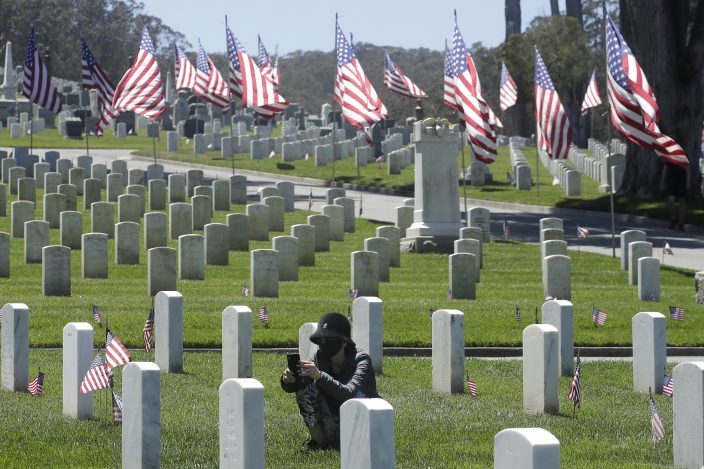 Nancy Graham wears a face mask as she takes photos of a gravestone during the coronavirus outbreak at San Francisco National Cemetery in the Presidio the day before Memorial Day in San Francisco, Sunday, May 24, 2020. (AP PhotoJeff Chiu)

On the Sunday U.S. talk shows, Dr. Deborah Birx, coordinator of the White House coronavirus task force, said she was “very concerned” about scenes of people crowding together over the weekend. In the Tampa area along Florida’s Gulf Coast, the crowds were so big that authorities took the extraordinary step of closing parking lots because they were full.

“We really want to be clear all the time that social distancing is absolutely critical. And if you can’t social distance and you’re outside, you must wear a mask,” Birx said on ABC’s “This Week.”

In Missouri, people packed bars and restaurants at the Lake of the Ozarks, a vacation spot popular with Chicagoans. 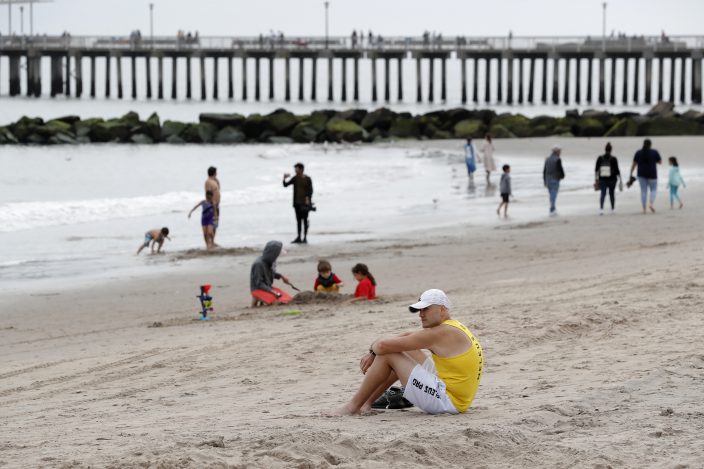 A man sits on t he beach as families play in the sand and at the water's edge at Coney Island beach during the current coronavirus outbreak, Sunday, May 24, 2020, in New York. Swimming was not allowed and New York City parks officers were arond to enforce that. (AP PhotoKathy Willens)

On Georgia’s Tybee Island, the beach was filled with families, but at a nearby grocery store, staff members handed customers gloves and a number to keep track of how many people were inside. Shoppers had their own masks.

Officials in California said most people were covering their faces and keeping their distance even as they ventured to beaches and parks. Many Southern California beaches were open only for swimming, running and other activities.

At New York’s Orchard Beach in the Bronx, kids played with toys, and people sat in folding chairs. Some wore winter coats on a cool and breezy day, and many wore masks and sat apart from others.

“Good to be outside. Fresh air. Just good to enjoy the outdoors,” said Danovan Clacken, whose face was covered.

The U.S. is on track to surpass 100,000 coronavirus deaths in the next few days, while Europe has seen over 169,000 dead, according to a tally by Johns Hopkins University that almost certainly understates the toll. Worldwide, more than 5.4 million people have been infected and nearly 345,000 have died.

Meanwhile, President Donald Trump, who went golfing for the second day in a row after not playing for weeks, said on the syndicated Sunday program “Full Measure With Sharyl Attkisson” that he is feeling fine after a two-week course of the unproven drug hydroxychloroquine and a zinc supplement.

The issue of wearing masks in public and staying several feet apart has become fraught politically, with some Americans arguing that such rules violate their rights.

Republican Gov. Mike DeWine of Ohio, who has been targeted by such demonstrations, insisted the precautions should not be a partisan issue.

“This is not about whether you are liberal or conservative, left or right, Republican or Democrat,” DeWine said on NBC’s “Meet the Press.”

The Trump administration on Sunday added Brazil to the list of countries from which it has banned travel. Brazil is second only to the U.S. in reported coronavirus cases.

The ban, which takes effect Thursday, applies to foreign nationals who have been in Brazil in the 14 days before they hoped to enter the United States. It does not apply to U.S. citizens or legal permanent residents or some of their relatives.

Across Europe, meanwhile, a mishmash of travel restrictions appears to be on the horizon, often depending on what passports visitors carry.

Beginning Monday, France is relaxing its border restrictions, allowing in migrant workers and family visitors from other European countries. Italy is only now allowing locals back to beaches in their own regions with restrictions.

For the first time in months, the faithful gathered in St. Peter’s Square for the traditional Sunday papal blessing. Some 2,000 Muslims gathered for Eid al-Fitr prayers at a sports complex in a Paris suburb, spaced 3 feet (1 meter) apart and wearing masks.

Beachside communities in England urged Londoners and others to stay away after rules were eased. “Wish you were here — but not just yet,” the southern coastal city of Brighton said.

Wales kept up its “Later” tourism campaign, reminding people that its hotels, restaurants and tourist sites are still closed.

Wolverhampton’s pursuit of a first ...

Atlanta Braves give no indication of considering name c ...

With teams in two sports taking a ...

Fauci to testify at a fraught time for US pandemic response