South Korea reported its highest number of new coronavirus infections in weeks on Wednesday and India reported another record single-day jump of more than 6,000 cases, as the pandemic expanded its grip across much of the globe.

Still, optimism over reopening economies from business shutdowns to fight the virus spurred a rally on Wall Street, even as the official U.S. death toll approached 100,000.

Outbreaks are still climbing in much of the Americas, while many countries in Asia and much of Europe are making steady progress in containing the deadliest pandemic in a century. 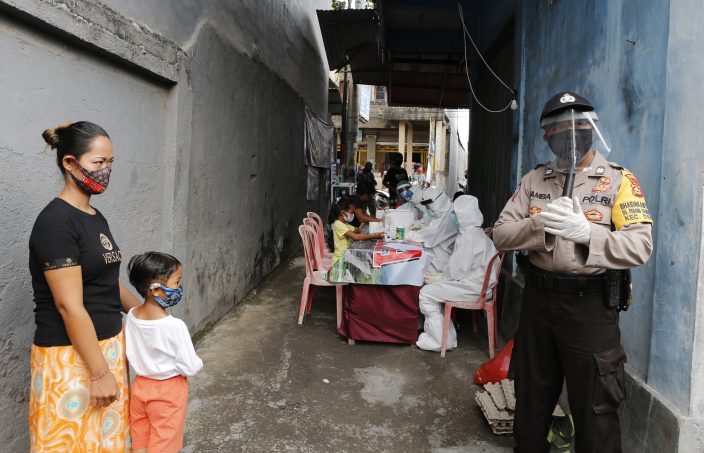 A police officer wearing a face shield and a face mask talks to residents during a coronavirus antibody test from health workers in Bali, Indonesia, Wednesday, May 27, 2020. (AP PhotoFirdia Lisnawati)

New Zealand's Ministry of Health reported Wednesday that there were no COVID-19 patients under treatment in hospitals. The nation took aggressive and early action to stop transmissions and has reported only 21 deaths. It has 21 active cases out of 1,504 confirmed and probable ones.

In South Korea, 40 newly confirmed cases — the biggest daily jump in nearly 50 days — raised alarm as millions of children were returning to school.

All but four of the new cases were in the densely populated Seoul region, where officials are scrambling to stop transmissions linked to nightclubs, karaoke rooms and an e-commerce warehouse. South Korea has reported 269 deaths and 11,265 cases, after managing to contain a severe earlier outbreak. 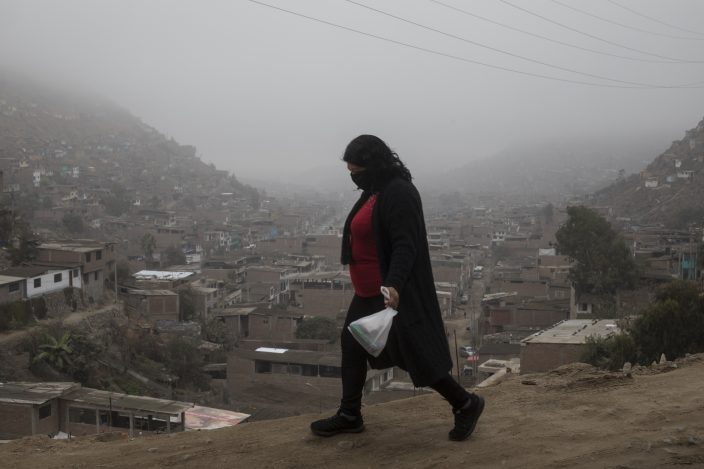 A woman wearing a protective mask against COVID-19 walks in the Villa Maria del Triunfo district, in the outskirts of Lima, Peru, Tuesday, May 26, 2020. (AP PhotoRodrigo Abd)

Authorities were testing 3,600 employees of a local e-commerce giant, Coupang, after discovering dozens of coronavirus infections linked to workers at the company’s warehouse near Seoul.

India saw another record single-day jump, reporting 6,387 new cases on Wednesday, as the government prepared new guidelines for the next phase of a 2-month-old national lockdown that is due to end on Sunday.

In the Americas, from Mexico to Chile, health officials were reporting surging coronavirus cases and overwhelmed hospitals. 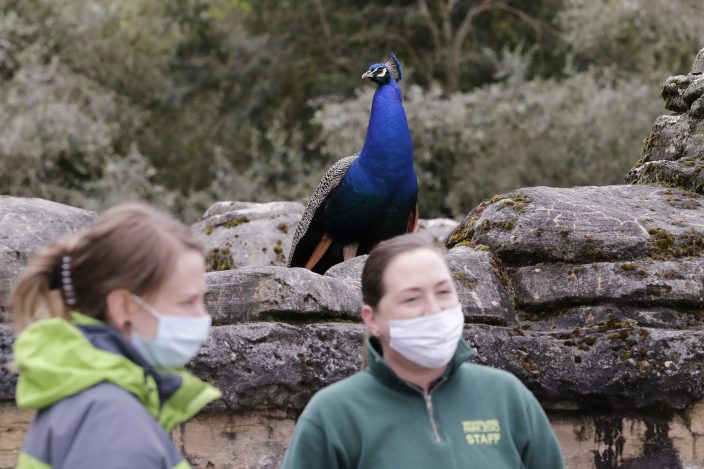 A free roaming peacock looks down at animal commissary workers Andrea Schneider, left, and Julie Rea at the Woodland Park Zoo, closed for nearly three months because of the coronavirus outbreak, Tuesday, May 26, 2020, in Seattle. King County remains in phase one of Washington Gov. Jay Inslee's four-phase plan to reopen Washington's economy. It's unlikely the Seattle zoo could open in the coming weeks based on criteria being studied by Washington state officials. (AP PhotoElaine Thompson)

Mexico’s health department reported 501 deaths from the coronavirus on Tuesday, a new one-day high, and 3,455 more infections. Its daily death toll is approaching that of the U.S., at about 620. Brazil currently leads in daily deaths with more than 800.

Authorities in Chile said their intensive care units were near full capacity, with about 4,000 new cases being confirmed daily. “This is an extraordinarily difficult time,” Health Minister Jaime Mañalich said.

A U.S. travel ban took effect Tuesday for foreigners coming from Brazil, where President Jair Bolsonaro has raged against state and local leaders enforcing stay-at-home measures despite warnings that the outbreak is deepening. 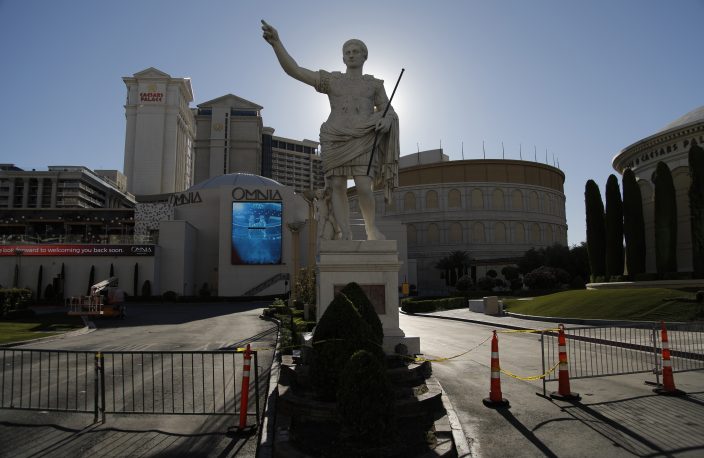 Gates block an entrance to Caesars Palace hotel and casino along the Las Vegas Strip devoid of the usual crowds during the coronavirus pandemic, Tuesday, May 26, 2020, in Las Vegas. (AP PhotoJohn Locher)

Brazil has about 375,000 coronavirus infections — second only to the 1.6 million cases in the U.S. — and has counted over 23,000 deaths, but many fear Brazil’s true toll is much higher.

Worldwide, the virus has infected nearly 5.6 million people and killed over 350,000, according to a tally by Johns Hopkins University. Europe has recorded about 170,000 deaths, while the U.S. has reported more than 98,900 in a span of less than four months, more than the number of Americans killed in the Vietnam and Korean wars combined.

The true death toll is widely believed to be significantly higher, with experts saying many victims died of the virus without ever being tested for it. 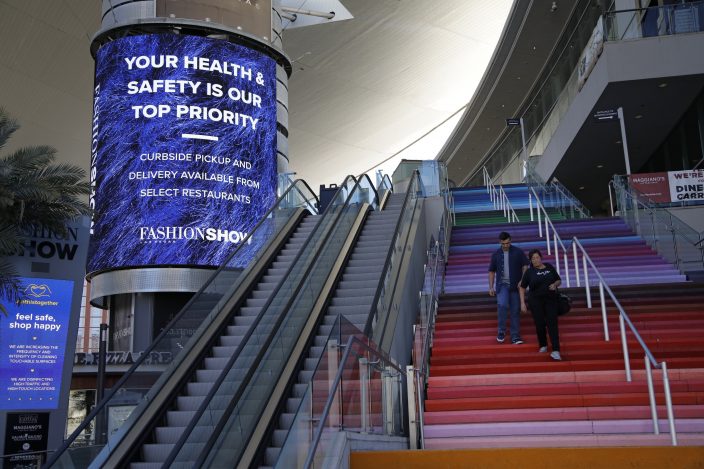 People walk out of a shopping mall where some restaurants have opened along the Las Vegas Strip devoid of the usual crowds during the coronavirus outbreak, Tuesday, May 26, 2020, in Las Vegas. (AP PhotoJohn Locher)

President Donald Trump several months ago likened the coronavirus to the flu and dismissed worries that it could lead to so many deaths. The administration’s leading scientists have since warned that as many as 240,000 could die from the virus.

The White House said Tuesday that the president was committed to holding a Fourth of July celebration in the nation’s capital even as local officials warned that the region — one of the hardest hit by the coronavirus — will not be ready to hold a major event.

“Given the number of individuals that would try to attend such an event, logistically such an event would be impossible to put on safely,” lawmakers from the city wrote in a statement. 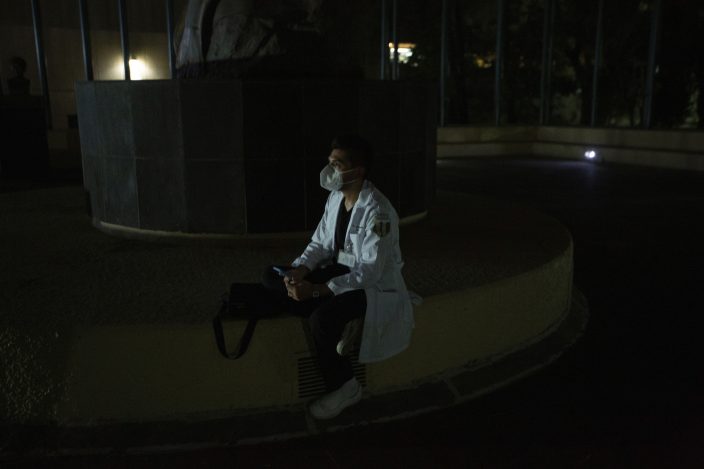 Doctor Juan Antonio Hernandez who works in the COVID-19 area of a public hospital waits for his photo to be displayed outside the hospital's auditorium in recognition of his work during the new coronavirus pandemic in Mexico City, Tuesday, May 26, 2020. (AP PhotoFernando Llano)

Washington Mayor Muriel Bowser said Tuesday that the city won’t be issuing any permits for large gatherings in the immediate future. The capital is still under a stay-at-home order, with plans to shift to Phase One of its reopening this weekend.

Reopenings are pushing ahead even as more than a dozen states are still seeing increasing numbers of new cases. News of reopenings was cheered on Wall Street, with the S&P 500 closing 1.2% higher, and the Dow Jones Industrial Average gaining nearly 530 points, or 2.2%.

Nevada Gov. Steve Sisolak announced Tuesday night that casinos can reopen on June 4, welcoming tourists to the gambling mecca of Las Vegas. Sisolak shuttered the casinos, which draw millions of tourists and power the state economy, 10 weeks ago to help stop the spread of the coronavirus. 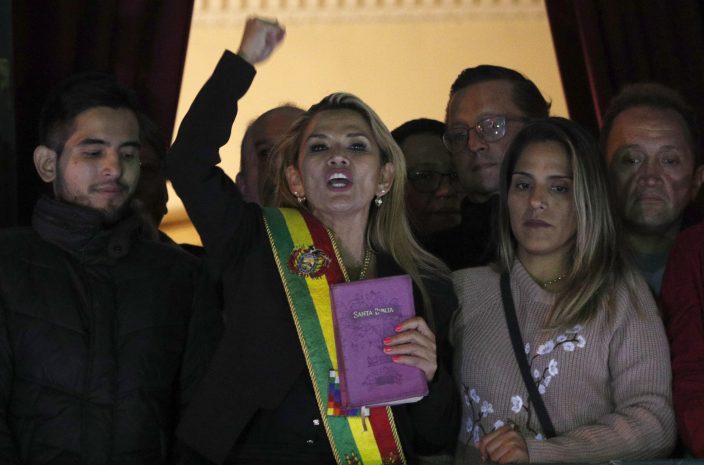 FILE - I this Nov. 12, 2019 file photo, the Senate's second vice president and opposition politician Jeanine Anez, center, wearing the Presidential sash addresses the crowd from the balcony of the Quemado palace after she declared herself interim president of the country, in La Paz, Bolivia. The corruption case involving Bolivia’s health minster amid allegations of the purchase of ventilators at inflated prices amid the coronavirus pandemic threatens to derail the presidential candidacy of Anez. (AP PhotoJuan Karita, File)

In New York, the state with the highest death toll from the virus, Gov. Andrew Cuomo said it was time to focus on relaunching New York City’s moribund economy. After ringing open the New York Stock Exchange's trading floor for the first time in two months, he laid out a plan that included accelerating major infrastructure projects and tackling transmission of the virus in the hardest-hit neighborhoods.

Cuomo reported a one-day total of 73 deaths on Tuesday, the lowest figure in months.

“In this absurd new reality, that is good news,” he said. 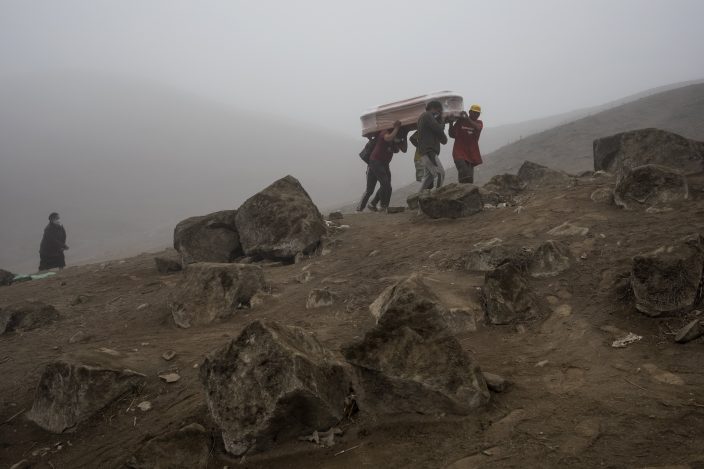 Cemetery workers carry the coffin with the corpse of Flavio Juárez, 50, who died from COVID-19, at the Nueva Esperanza cemetery on the outskirts of Lima, Peru, Tuesday, May 26, 2020. (AP PhotoRodrigo Abd) 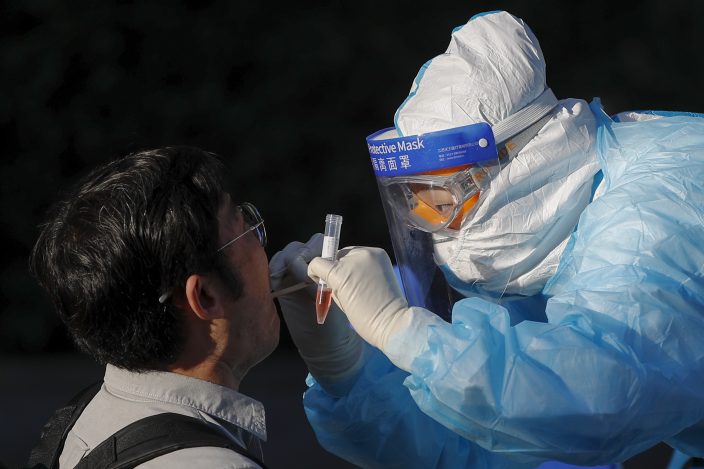 A medical worker takes a swab from a foreign reporter who was selected to cover the closing session of the Chinese People's Political Consultative Conference (CPPCC) for the coronavirus test, at a hotel in Beijing, Wednesday, May 27, 2020. (AP PhotoAndy Wong)