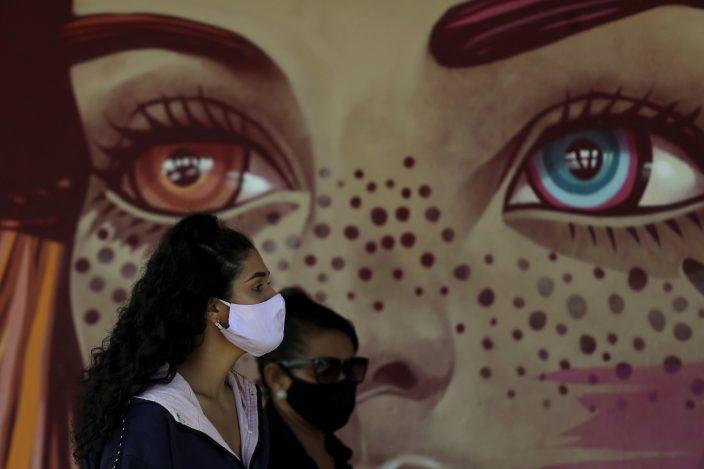 Women wear face masks amid the new coronavirus pandemic as they wait for a quick test at a COVID-19 testing site set up on a public school's basketball court in the Estrutural neighborhood of Brasilia, Brazil, Tuesday, May 26, 2020. According to officials, the objective is to expand surveillance and the tracking of possible asymptomatic positive cases, especially in poor, remote areas. (AP PhotoEraldo Peres)

VIRUS-OUTBREAK-THROUGH-KIDS’-EYES — These are children of the global pandemic. In the far-north Canadian town of Iqaluit, one boy has been glued to the news to learn everything he can about the coronavirus. A girl in Australia sees a vibrant future, tinged with sadness for the lives lost. A Rwandan boy is afraid the military will violently crack down on its citizens when his country lifts the lockdown. By Martha Irvine. SENT: 3,600 words, photos, video.

AP-POLL-VIRUS-OUTBREAK-VACCINES — Only about half of Americans say they would get a COVID-19 vaccine if the scientists working furiously to create one succeed, according to a new poll from The Associated Press-NORC Center for Public Affairs Research. But more people might eventually roll up their sleeves: The poll found 31% simply weren’t sure if they’d get vaccinated. Another 1 in 5 said they’d refuse. By Lauran Neergaard and Hannah Fingerhut. SENT: 1,000 words, photos, video, graphic. 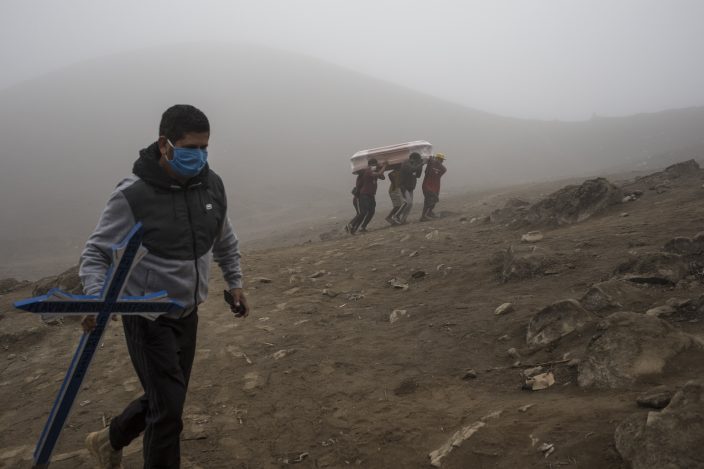 Cemetery workers carry the coffin with the corpse of Flavio Juarez, 50, who died from COVID-19, at the Nueva Esperanza cemetery on the outskirts of Lima, Peru, Tuesday, May 26, 2020. (AP PhotoRodrigo Abd)

VIRUS OUTBREAK-TRUMP-100,000 DEATHS — The known U.S. death toll from the coronavirus pandemic is fast approaching 100,000, a milepost that will leave an indelible mark on President Donald Trump’s time in office. Trump has dealt with the national trauma by insisting almost daily that none of it is his fault and it would have been much worse but for his actions. By Calvin Woodward. SENT: 1,230 words, photos, video. 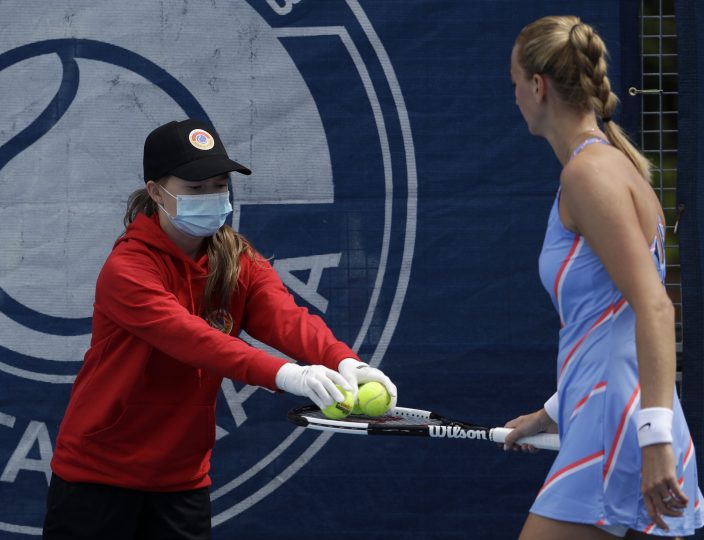 A ball girl wearing a face mask hands over balls to Petra Kvitova during her Czech Tennis President's Cup charity tournament match against Barbora Krejcikova in Prague, Czech Republic, Tuesday, May 26, 2020. The sporting event can take place as the Czech government is taking further steps to ease its restrictive measures adopted to contain the coronavirus pandemic. (AP PhotoPetr David Josek)

VIRUS OUTBREAK-THE 100 — The fraught, freighted number of this particular American moment is a round one brimming with zeroes: 100,000. A hundred thousands. A thousand hundreds. Five thousand score. More than 8,000 dozen. All dead. This is the week when America’s official coronavirus death toll reaches six digits. One hundred thousand lives wiped out by a disease unknown to science a half a year ago. By National Writer Ted Anthony. SENT: 1,130 words, photos.

VIRUS OUTBREAK — South Korea reports its highest number of new coronavirus infections in weeks and India reports another record single-day jump of more than 6,000 cases, as the pandemic expands its grip across much of the globe. Still, optimism over reopening economies from business shutdowns to fight the virus spurs a rally on Wall Street, even as the official U.S. death toll approaches 100,000. By Kim Tong-Hyung and Elaine Kurtenbach. SENT: 1,040 words, photos. With VIRUS-OUTBREAK-THE-LATEST. 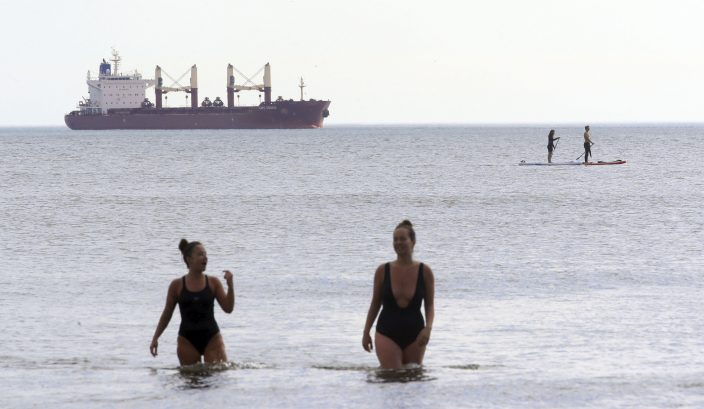 People enjoy the warm weather at King Edward's Bay, England, as the public are being reminded to practise social distancing during the good weather and the partial relaxation of lockdown restrictions, Tuesday May 26, 2020. The highly contagious COVID-19 coronavirus has impacted on nations around the globe, many imposing self isolation and exercising social distancing when people move from their homes. (Owen Humphreys PA via AP)

VIRUS OUTBREAK-LATIN AMERICA CORRUPTION — Even in a pandemic, there’s no slowdown for swindlers in Latin America. From Argentina to Panama, a number of officials have been forced to resign as reports of fraudulent purchases of ventilators, masks and other medical supplies pile up. The thefts are driven by price-gouging from manufacturers and profiteering by politically connected middlemen who see the crisis as an opportunity for graft. By Joshua Goodman. SENT: 1,060 words, photos. Also see MORE ON THE VIRUS OUTBREAK below.

MINNEAPOLIS-POLICE-DEATH — To the general public, the video of a white police officer pressing his knee into the neck of a shirtless black man prone on the street, crying out for help until he finally stopped moving, was horrifying. Four officers were fired a day after George Floyd’s death, a stunning and swift move by the Minneapolis chief with the mayor’s full backing. But despite their dismissal, whether the incident will be considered criminal, or even excessive force, is a more complicated question that will likely take months to investigate. By Amy Forliti and Jeff Baenen. SENT: 1,300 words, photos, video. 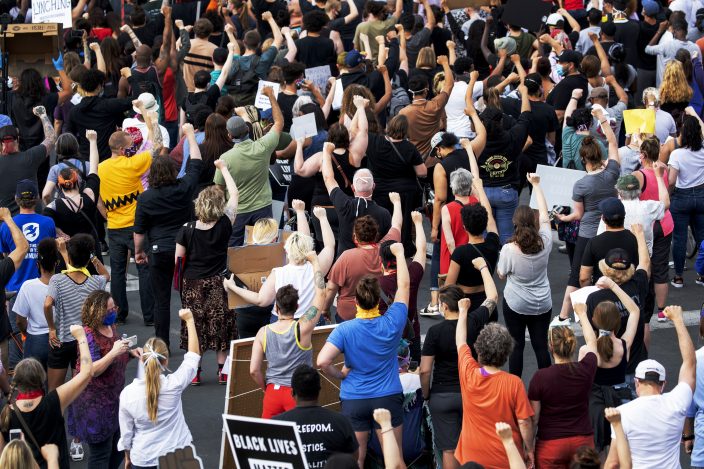 Protesters gather calling for justice for George Floyd on Tuesday, May 26, 2020, in Minneapolis, Minn. Four Minneapolis officers involved in the arrest of Floyd, a black man who died in police custody, were fired Tuesday, hours after a bystander's video showed an officer kneeling on the handcuffed man’s neck, even after he pleaded that he could not breathe and stopped moving. (Carlos GonzalezStar Tribune via AP)

VIRUS OUTBREAK-BAD EXAMPLES — Few countries seem immune to the perception that politicians and officials are bending the safety rules that their own governments wrote during the pandemic. SENT: 1,740 words, photos. 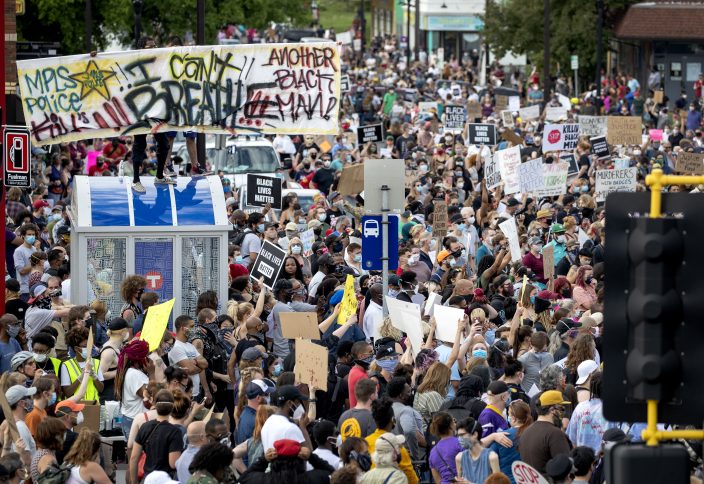 Protesters gather calling for justice for George Floyd on Tuesday, May 26, 2020, in Minneapolis. Four Minneapolis officers involved in the arrest of Floyd, a black man who died in police custody, were fired Tuesday, hours after a bystander's video showed an officer kneeling on the handcuffed man’s neck, even after he pleaded that he could not breathe and stopped moving. (Carlos GonzalezStar Tribune via AP)

VIRUS OUTBREAK-RUBIO — Sen. Marco Rubio, the new chairman of the Senate Intelligence Committee, is warning of widespread misinformation campaigns as the United States works to recover from the coronavirus. An AP Interview. By Mary Clare Jalonick and Lisa Mascaro. SENT: 940 words, photo.

VIRUS-OUTBREAK-SOUTH-KOREA — As South Korea significantly relaxes its rigid social distancing rules as a result of waning coronavirus cases, the world is paying close attention to whether it can return to something that resembles normal — or face a virus resurgence. SENT: 850 words, photos.

VIRUS OUTBREAK-MIDEAST — Iran convenes its newly elected parliament, dominated by conservative lawmakers and under strict social distancing regulations, as the country struggles to curb the spread of the coronavirus that has hit the nation hard. SENT: 530 words, photos.

VIRUS-OUTBREAK-EUROPE-ECONOMY — The European Union unveiling a massive coronavirus recovery plan worth hundreds of billions of dollars to help countries rebuild their ailing economies, but the bloc remains deeply divided over what conditions should be attached to the funds. SENT: 370 words, photos.

VIRUS-OUTBREAK-CALIFORNIA-CHURCHES — California’s churches, mosques and synagogue may get the nod to reopen their doors sooner than expected under new state guidelines. SENT: 910 words, photos, video.

VIRUS OUTBREAK-SOUTH AFRICA-BOOTLEGGING — A bootlegging culture springs up across South Africa in response to the government’s nearly 8-week-old ban on the sale of cigarettes and alcohol. SENT: 740 words, photos.

TRUMP-INSPECTORS GENERAL — The White House says Trump followed the law when he fired multiple inspectors general in the last two months, but the administration is offering no new details about why they were let go. SENT: 650 words, photos.

ELECTION 2020-BIDEN — Joe Biden says wearing a mask in public to combat the spread of the coronavirus is a sign of leadership and says Trump is a “fool” for suggesting otherwise. SENT: 740 words, photos, video.

PUERTO RICO-ECONOMIC CRISIS — A federal control board that oversees Puerto Rico’s finances prepared to vote on a revised fiscal plan as it warned the island’s surplus could plunge by 65% and that the government is unable to pay current debt obligations. SENT: 620 words.

BRAZIL-AMBASSADOR INTERVIEW — The administration of President Jair Bolsonaro is grateful for a U.S. warning that it intended to deny entry to foreigners arriving on flights from Brazil and for “gifts” to help cope with the COVID-19 pandemic, the South American country’s top diplomat in Washington says in an AP interview. By Mauricio Savarese and Nathan Ellgren. SENT: 740 words, photo.

JAPAN-ANIMATION STUDIO FIRE — Japanese police have arrested a suspect in the deadly arson at a Kyoto anime studio last year after he regained enough strength from his own severe burns to respond to the police investigation. SENT: 350 words, photo.

CANADA-US-HUAWEI — A top executive of Chinese tech giant Huawei is scheduled to learn if a U.S. extradition case against her can proceed. SENT: 470 words, photo.

VIRUS OUTBREAK-NHL — The NHL unveils a 24-team format in its bid to return to play, in what’s considered the first meaningful step in having its season resume and award the Stanley Cup. By Hockey Writers Stephen Whyno and John Wawrow. SENT: 880 words, photos. With PLAYOFF MATCHUPS — Sweet 16: NHL playoffs qualifying round tough to predict.

SEXUAL MISCONDUCT-CRIMINAL MINDS — The state of California files a lawsuit against CBS, Disney and producers of the long-running series “Criminal Minds,” alleging that the show’s cinematographer engaged in rampant sexual misconduct against crew members for years. By Andrew Dalton. SENT: 410 words, photo.