Jason Isbell had big plans for this summer, between a new album specifically designed to introduce his music to a wider audience and a schedule that had him onstage most nights from May to September.

Like millions of others, many of Isbell's dreams are on hold because of the coronavirus.

So on a recent evening, he and wife Amanda Shires performed his new songs for an Internet audience at a near-empty Nashville club. Stray claps sounded like they came from a handful of janitors sweeping up in the back. 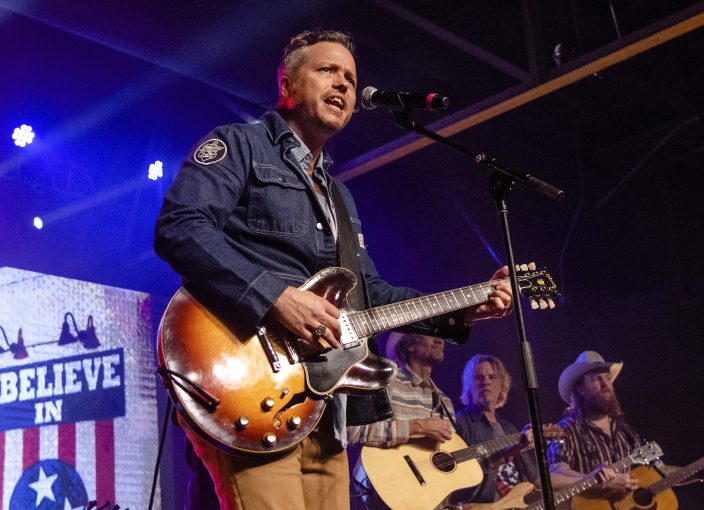 FILE - This March 9, 2020 file photo shows Jason Isbell, from left, Todd Snider, T.J. Osborne and Aaron Lee Tasjan performing at the To Nashville, With Love Benefit Concert in Nashville, Tenn. Isbell is king of the Americana genre, but he's ambitious for more. The new “Reunions” album reaches out sonically to people who might not normally listen to that type of music, but Isbell's well-crafted songs lie at the center of what he does. (Photo by Amy HarrisInvisionAP, File)

“It wasn't a new experience,” said Isbell, recalling a night in State College, Pennsylvania, where his only spectators were the opening band and bar employees.

But it's one that rightfully belongs in the rear-view mirror. The 2013 breakthrough album “Southeastern” established Isbell as an important new voice and two vibrant follow-ups proved that wasn't a fluke. With Lucinda Williams and t he late John Prine, Isbell formed a holy trinity for fans of Americana music.

Labels can be cages, though, ones didn't limit forebears like Bruce Springsteen or Tom Petty. They were rock stars whose music topped the pop charts. Isbell has similar lofty ambitions and, longtime producer Dave Cobb believes, the talent to back it up.

“You always want to reach people you haven't reached before,” Isbell explained. His last few albums effectively captured Isbell and his band, the 400 Unit, as if they played live in a room together. But Isbell wanted production touches that could help the disc “Reunions” appeal to people who might not listen to Americana music.

He considered hiring another producer, but first asked Cobb if he'd be willing to experiment more.

The touches were subtle: some synthesizers here and there, a guitar that occasionally recalls Dire Straits' Mark Knopfler. The song “Only Children” sounds like it has a celestial choir in the background.

Isbell's carefully-crafted songs are still the backbone. “Reunions” topped Billboard's country music chart on its first week of release, and was No. 9 on the pop chart.

His songs handle emotions complex and universal, from his life and others. “St. Peter's Autograph” is about his difficulty dealing with his wife's grief over the death of her friend. In “Letting You Go,” he tries to write about a father walking his daughter down the aisle while avoiding cheap sentiment.

Isbell has alluded in song to the turning point in his life — getting sober eight years ago — but never in the head-on manner he does with “It Gets Easier.”

“I felt like I had a certain perspective on it that I hadn't had before,” he said. “I'm sure that perspective will change with time. I felt a little bit safer doing that and a little bit more qualified.”

Before, he was reluctant to revisit the man he was before, a self-reckoning necessary to write a line like “last night I let myself remember times I forgot a woman's name.”

It may get easier, he concludes, but it never gets easy.

Isbell's inability to acknowledge the pressure that he felt while songwriting caused such conflict with Shires that, for 10 days, she moved out of their house and into a nearby hotel. They talked about the difficulties for an article in The New York Times that felt, in part, like an uncomfortable peek into a marriage counseling session.

“I didn't regret saying any of those things,” Isbell said. “My brand is the truth, for lack of a better term. People who are interested in following my story and my music are interested in honesty, so I'll give it to ‘em. If I’m living in a way where I think I should hide things from people, then maybe I should change the way I'm living.”

Two songs — “What Have I Done to Help” and “Be Afraid” — address his feelings about being more socially active, the former with guilt as the overriding emotion and the latter with anger.

“Be Afraid” cites the “shut up and sing” pressure that many artists face, a reference to the reaction that torpedoed the Dixie Chicks' career when they spoke out against former President George W. Bush.

Isbell, a progressive with no interest in seeing Trump re-elected, will likely face those issues himself in an election year.

“It's going to take some thought,” he said. “But, hey, we've got time to sit around and think about it right now.”

Resuming life for Isbell isn't a matter of feeling comfortable enough to drive to an office, of course. No one knows when he'll be allowed to gather an audience to see him play, or when his fans will feel comfortable.

The federal government says it wil ...