As the death toll from the coronavirus rose above 100,000 in the United States, there were also record numbers getting sick in India and worrying signs of a resurgence in South Korea.

The once-unthinkable milestone in the U.S. means that more Americans have died from the virus than were killed in the Vietnam and Korean wars combined.

“It’s a striking reminder of how dangerous this virus can be,” said Josh Michaud, associate director of global health policy with the Kaiser Family Foundation in Washington. A woman wearing face mask and face shield to help curb the spread of the new coronavirus, checks surgical gown at a packing session at a garment factory Thursday, May 28, 2020, at Industrial Zone in Yangon, Myanmar. Despite a poor public health infrastructure and crowded urban areas, Myanmar has reported a surprising low number of COVID-19 cases, with just a little over 200 confirmed and a few deaths. (AP PhotoThein Zaw)

India, home to more than 1.3 billion people, reported more than 6,500 new infections Thursday as cases continued to rapidly rise. The surge comes as the nation's two-month-old lockdown is set to end on Sunday.

South Korea reported 79 new cases, its biggest daily jump in more than 50 days. It represents a big setback for a nation that has been held up as a model for containment.

South Korean health officials warned the resurgence is getting harder to track and social distancing and other steps need to be taken. Most new cases were from the Seoul metropolitan area, where about half of the nation's 51 million people live. 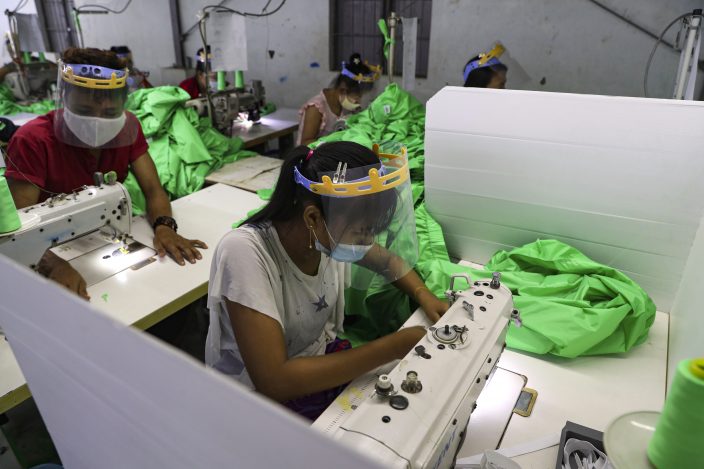 Workers wearing face mask and face shield to help curb the spread of the new coronavirus, sew behind white partition surrounding their sewing tables as they work at a garment factory Thursday, May 28, 2020, at Industrial Zone in Yangon, Myanmar. Despite a poor public health infrastructure and crowded urban areas, Myanmar has reported a surprising low number of COVID-19 cases, with just a little over 200 confirmed and a few deaths. (AP PhotoThein Zaw)

Some countries are seeing improvements. New cases in Spain and Italy have fallen steadily for two months. China reported just two new cases on Thursday, both from abroad. New Zealand has reported no new cases for six days and has just eight active cases remaining.

But the situation in many countries underscores the difficulty in reopening economies.

In the U.S., Las Vegas casinos and Walt Disney World have made plans to reopen, and crowds of unmasked Americans are expected to swarm beaches over the summer months. Public health officials predict a resurgence by fall. 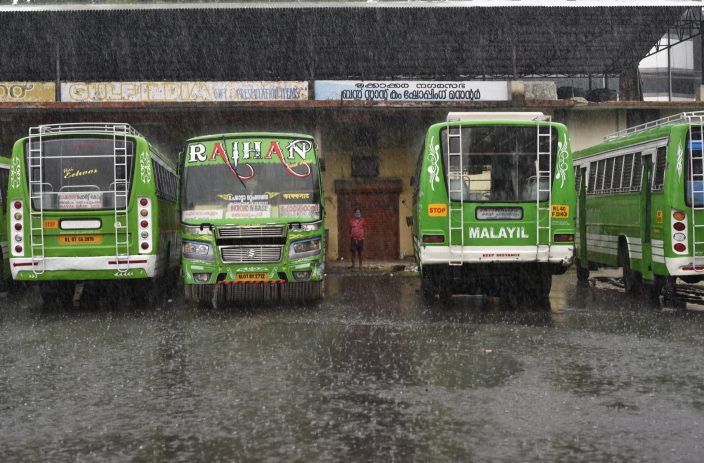 A man wearing a mask stands next to buses that have not been plying for near past two months as it rains in Kochi, Kerala state, India, Thursday, May 28, 2020. Many buses are still lying idle though services have partially resumed in the state. India sees no respite from the coronavirus caseload at a time when the two-month-old lockdown across the country is set to end on Sunday. (AP PhotoR S Iyer)

“We have a situation in which you see that type of crowding with no mask and people interacting. That’s not prudent, and that’s inviting a situation that could get out of control,” he said during an interview on CNN.

Worldwide, the virus has infected more than 5.6 million people and killed over 350,000, with the U.S. having the most confirmed cases and deaths, according to a tally by Johns Hopkins University. Europe has recorded about 170,000 deaths. 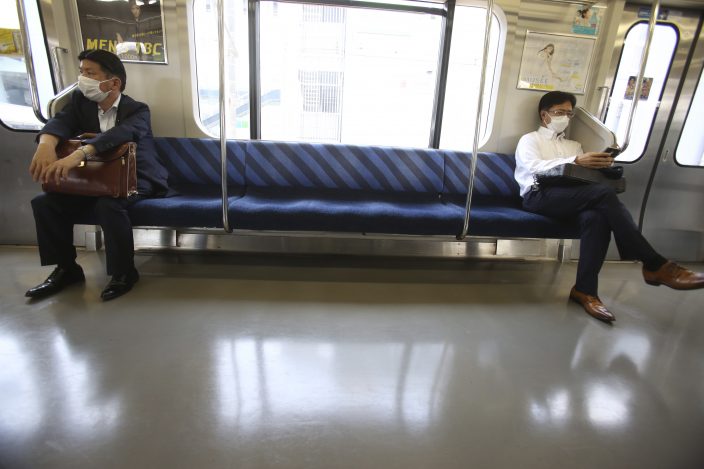 People wearing face masks to protect against the spread of the new coronavirus keep social distancing in a train in Yokohama, near Tokyo, Thursday May 28, 2020. Japanese Prime Minister Shinzo Abe lifted a coronavirus state of emergency on Monday, ending the restrictions nationwide as businesses begin to reopen. (AP PhotoKoji Sasahara)

The true death toll from the virus is widely believed to be significantly higher, with experts saying many victims died without ever being tested.

Early on, President Donald Trump downplayed the severity of the virus, likening it to the flu, and predicted the U.S. wouldn’t reach 100,000 deaths. 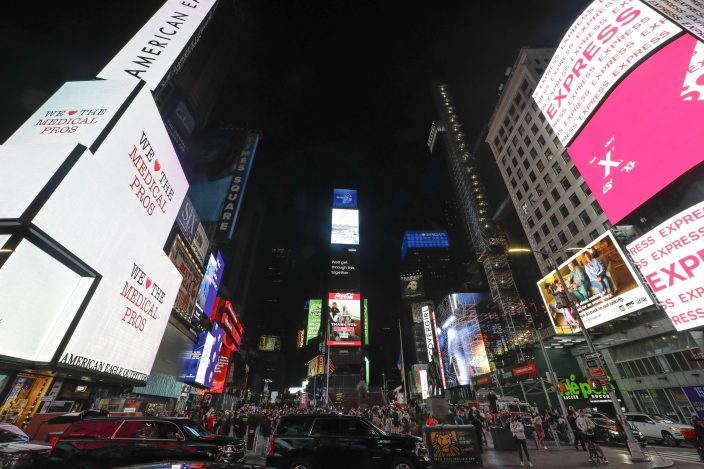 Critics have said deaths spiked because Trump was slow to respond, but he has contended on Twitter that it could have been 20 times higher without his actions. He has urged states to reopen their economies after months of stay-at-home restrictions.

In hard-hit Brazil, the virus has been spreading into indigenous lands and this week two virus deaths were registered in the Xingu area, one of the biggest reserves in the world.

Those who died were from the Kayapo indigenous group. The community’s leader, Megaron, told The Associated Press he wants President Jair Bolsonaro and other officials to stop loggers, miners and fishermen from illegally entering the territory, incursions he believes have sped up the spread of the virus. 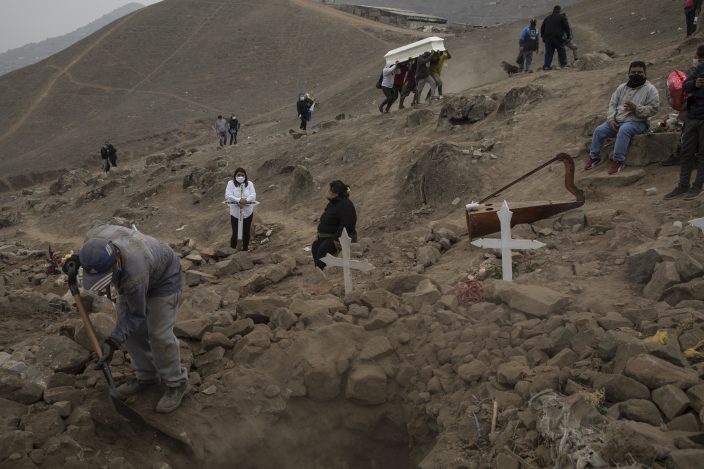 A cemetery worker shovels dirt into a grave that contains the remains of Apolonia Uanampa who died from the new coronavirus, as the coffin that contains the remains of Demetria Huamani, also a victim of the virus, is carried to her burial site at the Nueva Esperanza cemetery on the outskirts of Lima, Peru, Wednesday, May 27, 2020. (AP PhotoRodrigo Abd)

But Bolsonaro is a strong critic of environmentalist groups and nonprofit organizations that work with indigenous people. He also contends there has been an overreaction to the virus and argues against lockdowns ordered by local officials, saying the economic disruptions will kill more than the virus.

Comparing countries is tricky, given varying levels of testing and that some deaths can be missed. According to figures tracked by Johns Hopkins, the death rate per 100,000 people is lower in the U.S. than in Italy, France and Spain but higher than in Germany, China, South Korea, Singapore, Japan, New Zealand and Australia.

“The experience of other countries shows that death at that scale was preventable,” said Michaud. “To some extent, the United States suffers from having a slow start and inconsistent approach. We might have seen a different trajectory if different policies were put into place earlier and more forcefully.”

Countries with low death rates suppressed the virus “through lots of testing, contact tracing and policies to support isolation and quarantine of people at risk,” Michaud said.

“It reflects the fact that we have neglected basic fundamentals for health,” El-Sadr said. “So, now we are in this shameful situation. It is the most vulnerable people in our midst — the elderly, the poor, members of racial/ethnic minority groups — who are the ones disproportionately getting sick and dying.”

Associated Press reporters from around the world contributed to this report

July US jobs report is expected to point to hiring slowdown

Virus testing in the US is dropping, even as deaths mount

'Too many are selfish': US nears 5 million virus cases

Summer road trip? Quarantines are crimping some US travelers