Demonstrators gather during a protest Wednesday, May 27, 2020, in Los Angeles over the death of George Floyd in Minneapolis police custody earlier in the week. (AP PhotoRingo H.W. Chiu)

VIRUS-OUTBREAK-LEFT-TO-DIE — Spain’s more than 19,000 nursing home deaths put it ahead of any other country in Europe. And it’s led to soul-searching over its elder-care system, particularly public nursing homes operated by private firms that seek to turn profits quickly by cutting staff, expenses and some say care to the bone. Dozens of interviews with workers, relatives and residents painted a picture of what some have called a “fast-food” version of elder care. By Aritz Parra. SENT: 2,400 words, photos. An abridged version of 1,070 words is available.

VENEZUELA-AMERICAN MERCENARY — An investigation by The Associated Press shows that Jordan Goudreau, a former Green Beret who launched a failed plot this month to capture Venezuela President Nicolás Maduro, flew to a planning meeting in Colombia aboard a plane owned by Franklin Durán, a businessman with longtime ties to the socialist government. By Joshua Goodman. SENT: 1,740 words, photos. A man poses for photos in front of a fire at an AutoZone store, while protesters hold a rally for George Floyd in Minneapolis on Wednesday, May 27, 2020. Violent protests over the death of the black man in police custody broke out in Minneapolis for a second straight night Wednesday, with protesters in a standoff with officers outside a police precinct and looting of nearby stores. (Carlos GonzalezStar Tribune via AP)

VIRUS-OUTBREAK — As the death toll from the coronavirus rose above 100,000 in the United States, there were also record numbers getting sick in India and worrying signs of a resurgence in South Korea. The once-unthinkable milestone in the U.S. means that more Americans have died from the virus than were killed in the Vietnam and Korean wars combined. The virus has infected more than 5.6 million people worldwide and killed over 350,000. By Nick Perry. SENT: 900 words, photos. With VIRUS-OUTBREAK-THE-LATEST. Demonstrators shut down the Hollywood Freeway during a protest for George Floyd in downtown Los Angeles Wednesday, May 27, 2020. Hundreds of people protesting the death of the black man in Minneapolis police custody blocked the Los Angeles freeway and shattered windows of California Highway Patrol cruisers on Wednesday. (AP PhotoRingo H.W. Chiu)

CHINA-CONGRESS — China’s ceremonial legislature endorses a national security law for Hong Kong that has strained relations with the United States and Britain. The Hong Kong security law will alter the territory’s mini-constitution, or Basic Law, to require its government to enforce measures to be decided later by Chinese leaders. SENT: 160 words, photos. UPCOMING: Developing, will be updated. With HONG KONG-CHINA — Lawmakers ejected in Hong Kong debate on Chinese anthem bill. Demonstrators attack a highway parol car while its windows were being shattered during a protest for George Floyd in downtown Los Angeles Wednesday, May 27, 2020. Hundreds of people protesting the death of the black man in Minneapolis police custody blocked the Los Angeles freeway and shattered windows of California Highway Patrol cruisers on Wednesday. (AP PhotoRingo H.W. Chiu)

VIRUS OUTBREAK-LATIN AMERICA-HUNGER — The U.N. World Food Program is warning that upward of at least 14 million people could go hungry in Latin America as the coronavirus pandemic rages on, shuttering people in their homes, drying up work and crippling the economy. By Christine Armario. SENT: 900 words, photos. Also see MORE ON THE VIRUS OUTBREAK below.

SLAYINGS-SEARCH — A college student sought by police as a suspect in a crime spree including two slayings in Connecticut has been captured in Maryland, police say. Peter Manfredonia had been the subject of a six-day search involving several police agencies and the FBI. By Pat Eaton-Robb. SENT: 520 words, photos. 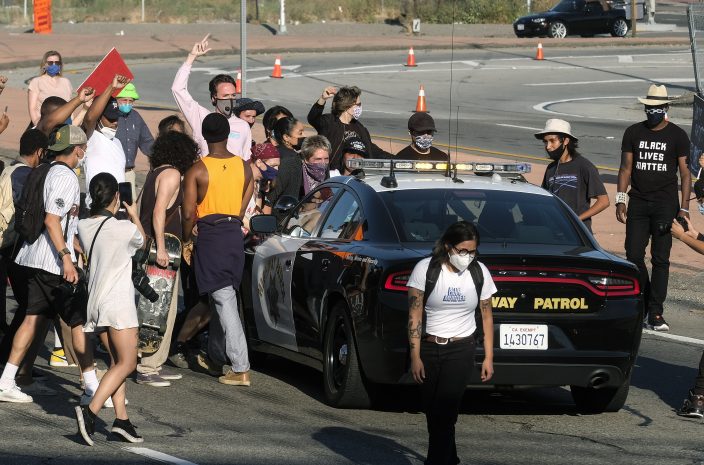 VIRUS OUTBREAK-LIVES LOST-NUREMBERG GUARD — Emilio DiPalma, who fought on the front lines during World War II and served as a courtroom guard during the trial of top Nazi war criminals, has died from the coronavirus. SENT: 910 words, photos. A man gets out of a Target store with merchandise, and a mannequin in Minneapolis on Wednesday, May 27, 2020. Violent protests over the death of a black man in police custody broke out in Minneapolis for a second straight night Wednesday, with protesters in a standoff with officers outside a police precinct and looting of nearby stores. (Aaron LavinskyStar Tribune via AP)

VIRUS-OUTBREAK-ONE-GOOD-THING-CROATIA-TOURISM — If it hadn’t been for Igor Loparic and his charity, many in the northern Croatian Istria region wouldn’t be able to cope with the crisis brought on by the new coronavirus. SENT: 630 words, photos.

VIRUS OUTBREAK-ASIA — South Korea reports its biggest jump in coronavirus cases in more than 50 days, a setback that could erase some of its hard-won gains. SENT: 850 words, photos.

VIRUS-OUTBREAK-PROTECTING CIVILIANS — The president of the International Committee of the Red Cross says it has recorded 208 COVID-19-related attacks against health workers and installations in 13 countries since March. SENT: 570 words. 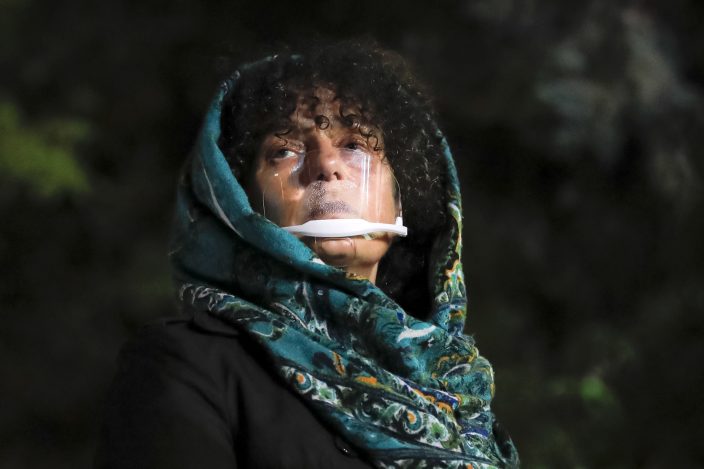 An orthodox worshiper, with an eye protection shield around her mouth for protection against the COVID-19 virus, attends a religious service in the Black Sea port of Constanta, Romania, late Tuesday, May 26, 2020. (AP PhotoVadim Ghirda)

VIRUS OUTBREAK-BRAZIL-INDIGENOUS — As the coronavirus spreads into indigenous lands in Brazil, killing at least 40 people so far by the government’s count, the first two COVID-19 deaths were registered this week in the Xingu area, one of the biggest reserves in the world. SENT: 580 words, photo. 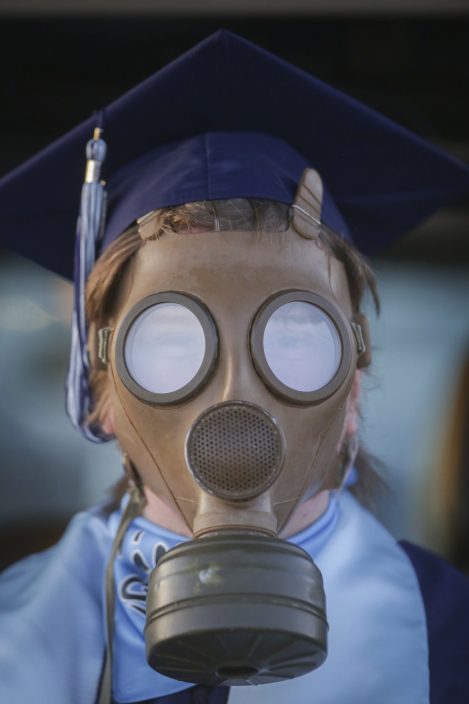 Isaac Hill wears a gas mask along with his cap and gown during the graduation ceremony for Skyline High School at Motor Vu Drive-In in Idaho Falls, Idaho, Wednesday, May 27, 2020, during the coronavirus pandemic. (John RoarkThe Idaho Post-Register via AP) Locals play baseball wearing masks as a precaution against the spread of the new coronavirus in Las Playas neighborhood, in eastern Havana, Cuba, Wednesday, May 27, 2020. Cuban authorities are requiring the use of masks for anyone outside their homes. (AP Photo Ramon Espinosa) Residents look out their window as they wait for the delivery of free food, amid a lockdown to help curb the spread of the new coronavirus in Bogota, Colombia, Wednesday, May 27, 2020. The city government is distributing food to poor people who can't go out to work due to the lockdown. (AP PhotoFernando Vergara)

ELECTION 2020-VOTING WORRIES — The public may not know the winner of the presidential race on Election Day because of a massive shift to voting by mail during the coronavirus pandemic. SENT: 990 words, photos. 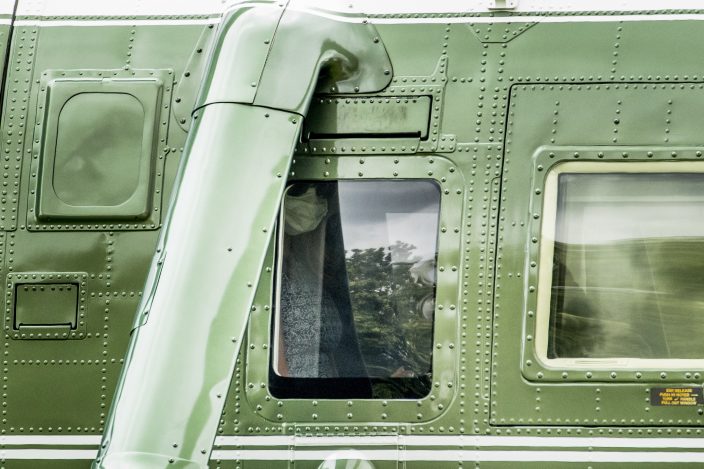 First lady Melania Trump wears a face mask as she sits aboard Marine One with President Donald Trump before they depart from the South Lawn of the White House in Washington, Wednesday, May 27, 2020, for a short trip to Andrews Air Force Base, Md. Trump is traveling to Kennedy Space Center, Fla., for the launch of a rocket ship built by the SpaceX company, putting NASA back in the business of launching astronauts from U.S. soil for the first time in nearly a decade. (AP PhotoAndrew Harnik)

LEBANON-CENTRAL-BANK-GOVERNOR — Lebanon’s central bank governor is being called a “thief” by some anti-government protesters who see him as a member of a corrupt ruling elite whose mismanagement has driven the country to the edge of bankruptcy. SENT: 1,040 words, photos.

OBIT-SAM-JOHNSON — Former Texas Rep. Sam Johnson, a military pilot who spent years as a prisoner of war in Vietnam before serving more than two decades in Congress, dies at age 89. SENT: 1,080 words, photos.

FINANCIAL-MARKETS — Asian stocks were mixed after an upbeat open, as investors pinned their hopes on an economic rebound from the coronavirus crisis. By Business Writer Elaine Kurtenbach. SENT: 980 words, photos.

AUSTRALIA-NEWS-CORP — Australia’s largest newspaper publisher, News Corp., announces that most of its suburban and regional mastheads across the country will become digital-only next month due to the pandemic and digital platforms sharing their content. SENT: 500 words, photos.