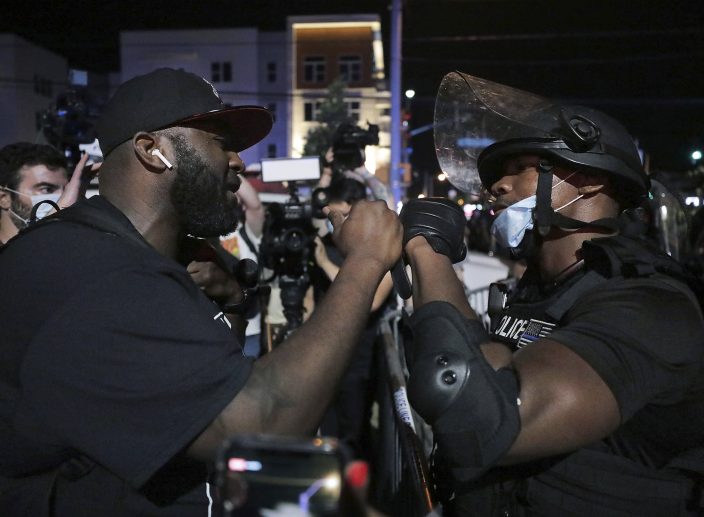 A Memphis Police officer fist bumps a protestor in an attempt to bring the protest over the death of George Floyd to a peaceful conclusion, Thursday, May 28, 2020, in Memphis, Tenn. (Patrick LantripDaily Memphian via AP)

MINNEAPOLIS-POLICE-DEATH-PROTESTS — Cheering protesters torch a Minneapolis police station that the department was forced to abandon as three days of violent protests spread to nearby St. Paul and angry demonstrations flared across the U.S. over the death of George Floyd, a handcuffed black man who pleaded for air as a white police officer kneeled on his neck. By Tim Sullivan and Amy Forliti. SENT: 1,650 words, photos, videos. With MINNEAPOLIS-POLICE-DEATH-DENVER-PROTEST — Shots fired during Denver protest of Minneapolis man’s death.

MINNEAPOLIS DEATH-POLICE REACTION — The reaction from some law enforcement on the death of a handcuffed black man by a white Minneapolis officer stands in stark contrast to their responses to other in-custody fatalities. By Stefanie Dazio. SENT: 840 words, photos. With TRUMP-MINNEAPOLIS DEATH — Trump calls Floyd death “shocking," calls protesters “thugs." Also see FATAL POLICE SHOOTING-KENTUCKY below. 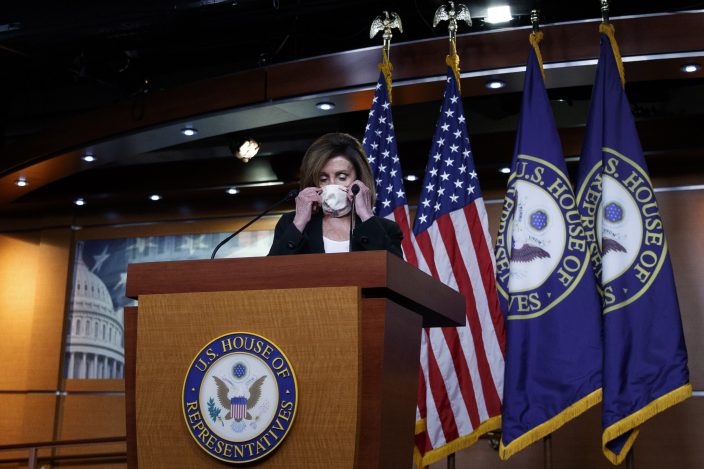 House Speaker Nancy Pelosi of Calif., pulls down her face mask as she arrives to speak at a news conference on Capitol Hill in Washington, Thursday, May 28, 2020. (AP PhotoCarolyn Kaster)

VIRUS OUTBREAK — New Zealand has all but eradicated the coronavirus from its shores with just one person in the nation of 5 million known to be still infected, but developments elsewhere were generally grim, with India reporting another record increase in cases and Pakistan a record number of deaths. In the U.S., the virus threw more than 2 million people out of work last week despite the gradual reopening of businesses, stoking fears the scourge is doing deep and potentially long-lasting damage to the world’s largest economy. By Nick Perry. SENT: 740 words, photos. With VIRUS-OUTBREAK-THE-LATEST.

VIRUS-OUTBREAK-ALABAMA — Sparsely populated Lowndes County, deep in Alabama’s old plantation country, has the sad distinction of having both the state’s highest rate of COVID-19 cases and its worst unemployment rate. The county and other rural areas in the state are now faced with a lack of access to medical care combined with poverty and the attendant health problems that can worsen the outcomes for those who become sick with the coronavirus. By Jay Reeves and Kim Chandler. SENT: 1,000 words, photos.

VIRUS OUTBREAK-MILITARY TRAINING — The coronavirus pandemic is changing training at the Marine Corps’ Parris Island Recruit Depot and across the military. And defense leaders say some of the adjustments are proving beneficial and could become permanent. By Lolita C. Baldor. SENT: 1,030 words, photos. 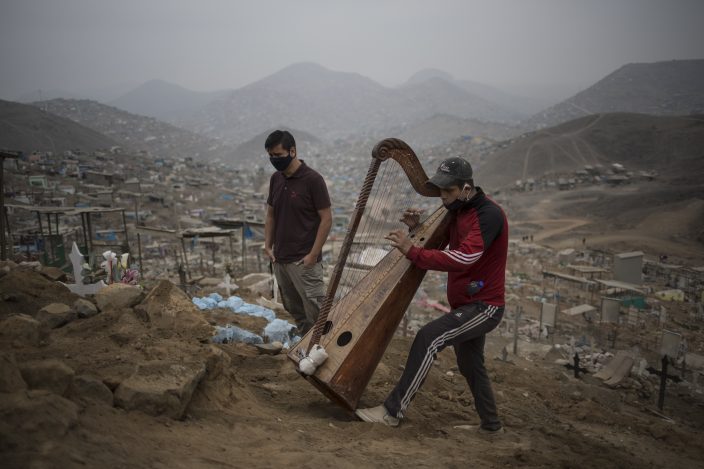 Harpist Charlie Juarez strums his instrument as Jean Pierre stands at the foot of his father's grave Segundo Lopez Guevara who died from the new coronavirus, at the Nueva Esperanza cemetery on the outskirts of Lima, Peru, Wednesday, May 27, 2020. (AP PhotoRodrigo Abd)

VIRUS OUTBREAK-TRANSPLANT TRANSPORT — Over the past two months, as air travel ground to a halt, Mishel Zrian has crisscrossed the Atlantic and the United States dozens of times, sleeping in empty airports and unable to return home to see his family in Israel, all in a race against time to deliver life-saving transplants. By Tia Goldenberg. SENT: 990 words, photos. Also see MORE ON THE VIRUS OUTBREAK below.

VIRUS OUTBREAK-GREECE-ORTHODOX COMMUNION — For Orthodox Christians, the use of a shared spoon by a priest to distribute Holy Communion is a tradition that dates back thousands of years, a practice today that would alarm an epidemiologist. SENT: 1,030 words, photos.

VIRUS OUTBREAK-NATION’S CAPITAL REOPENS — A tiny slice of pre-pandemic normality begins returning to the nation’s capital as the three-month old coronavirus stay-home order is replaced by the first phase of a reopening plan. SENT: 740 words, photos.

VIRUS-OUTBREAK-NETHERLANDS-RESTAURANT-ROBOTS — When Shaosong Hu saw robots serving food in China last fall, he knew exactly what he wanted for his restaurant in the Dutch beachside town of Renesse. SENT: 540 words, photos.

VIRUS OUTBREAK-BRITAIN-STRESSED KIDS — A British army veteran is leading children in a military-style game designed to boost their resilience and mental health at a time of atypical stress. SENT: 630 words, photos.

VIRUS OUTBREAK-BRAZIL-DRIVE-THRU WEDDING — Most states in Brazil are prohibiting large gatherings in their efforts to curb the spread of the coronavirus, forcing many couples to put off traditional wedding ceremonies. SENT: 470 words, photo.

VIRUS-OUTBREAK-UN-YEMEN ON BRINK — The U.N. humanitarian chief urgently appeals for $2.4 billion to help millions of people in Yemen cope with the conflict and COVID-19, saying programs are already being cut and the situation is “alarming.” SENT: 540 words, photo.

POLICE-SHOOTING-CORONAVIRUS — A man shot by New York City police last month after menacing officers with a knife and an antique gun died of the coronavirus five days after he was wounded, police say. SENT: 340 words.

VIRUS OUTBREAK-ASIA — Muslims in some parts of Indonesia attend Friday prayers as mosques closed by the coronavirus for weeks are allowed to start reopening in the world’s most populous Muslim nation. SENT: 1,000 words, photos.

NEW ZEALAND-STRANDED SAILORS — Hundreds of sailors find themselves stranded in paradise because of the coronavirus pandemic. SENT: 920 words, photos.

ELECTION 2020-TRUMP-ECONOMY — The White House takes the unusual step of deciding not to release an updated economic forecast for this year. SENT: 990 words, photo.

AUSTRALIA-PALACE-LETTERS — Australia’s highest court rules to make public letters between Queen Elizabeth II and her representative that would reveal what knowledge she had, if any, of the dismissal of an Australian government in 1975. SENT: 840 words, photos.

MALAYSIA-POLITICS — Malaysia’s former Prime Minister Mahathir Mohamad is ousted from his ethnic Malay political party in the latest twist of a power struggle with his successor, but he vows to challenge the move. SENT: 450 words, photos.

FATAL POLICE SHOOTING-KENTUCKY — At least seven people were shot in Louisville as protesters turned out to demand justice for Breonna Taylor, a black woman fatally shot by police in her home in March. SENT: 480 words, photo.

A gang of criminals ambushed and f ...

The famed statue of Hans Christian ...