The Latest on the coronavirus pandemic. The new coronavirus causes mild or moderate symptoms for most people. For some, especially older adults and people with existing health problems, it can cause more severe illness or death.

— New Zealand near eradication, but virus has grim global hold. 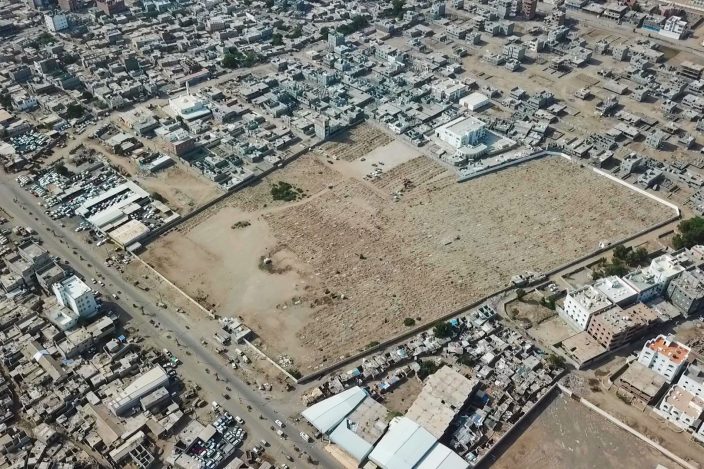 This May 21, 2020, photo, shows a general view of Radwan Cemetery in Aden, Yemen. At the cemetery in Yemen’s largest southern city, dozens of fresh graves are a testament to a spike in deaths amid the coronavirus pandemic. The cemetery workers who bury them don’t know what killed the newly deceased. But there’s no denying that there's been an increasing number of people getting sick in the port city of Aden — likely from the coronavirus. (AP Photo)

— Indonesians return to mosques, at a distance.

— UN urgently appeals for $2.4 billion to help Yemen cope with war and virus.

JOHANNESBURG — South Africa says it has a backlog of nearly 100,000 unprocessed tests for the new coronavirus.

A health ministry statement overnight puts the backlog as of Monday at 96,480. The ministry says “this challenge is caused by the limited availability of test kits globally.” It says priority is being given to processing tests from patients admitted to hospitals and health workers.

“We understand this tragedy will certainly test you,” the ministry said in a message to her colleagues, adding that the government is committed to providing proper protective gear that also faces shortages.

JAKARTA, Indonesia — Muslims in some parts of Indonesia attended Friday prayers as mosques closed by the coronavirus for weeks were allowed to start reopening in the world’s most populous Muslim nation.

The guidelines for worship facilities released by religious affairs minister Fachrul Razi on Friday change many traditions in mosques. Worshippers usually pray shoulder to shoulder, and they huddle, hug and shake hands once the prayer ends, with cheek-to-cheek kisses common.

Muslims in the Jakarta satellite city of Bekasi were expected during Friday’s prayers to stay at least 1 meter (yard) apart from one another without shaking hands and would hear shorter sermons. No children were allowed to join the prayers, and police and soldiers were there to ensure health protocols such as social distancing and wearing a mask were observed.

Similar scenes were seen in another satellite city of Bogor, and Makassar, one of Indonesia’s big cities on Sulawesi island.

President Joko Widodo said his administration wants Indonesia to remain productive economically but also safe from the virus. He said any measures to start the so-called “new normal” would be based on epidemiological data.

The government has been deploying 340,000 security forces gradually to enforce the health rules as the country prepares to reopen its economy.

Indonesia had recorded more than 24,500 COVID-19 cases as of Thursday with nearly 1,500 deaths, the most fatalities in Southeast Asia.

BANGKOK — Authorities in Thailand are relaxing restrictions imposed two months ago to combat the spread of the coronavirus.

Venues allowed to reopen Monday include cinemas, theaters, zoos and aquariums, but they must limit admissions. Cinemas will be allowed to hold a maximum of 200 people at a time, seated at a safe social distance from each other — with the exception of couples.

Restaurants were already allowed to reopen earlier this month but under conditions ensuring social distancing. Malls were previously allowed to reopen, and the new rules change their mandatory closing time from 8 p.m. to 9 p.m.

Commercial passenger flights from abroad remain banned until at least the end of June.

Thailand has had just single-digit increases in the number of confirmed COVID-19 cases for most of May. It announced 11 new cases Friday, bringing the total to 3,076 including 57 deaths.

WELLINGTON, New Zealand — New Zealand reported just a single person in the entire nation of 5 million people is known to still have the coronavirus after no new cases have been detected for the past week.

ISLAMABAD — Pakistan reported 57 coronavirus-related deaths in the past 24 hours, its most in one day since the outbreak began in February.

The latest figure increased the country's COVID-19 death toll to 1,317. The government also reported 2,636 new infections on Friday, raising the total number of cases to 64,028.

Currently 4,615 people with infections are being treated at 726 hospitals across the country, and other patients have been quarantined at their homes or government facilities. So far, 22,305 patients have recovered.

Coronavirus-related deaths and cases have increased in various parts of Pakistan, including Islamabad, in recent weeks as the government eased lockdown restrictions — ignoring warnings from medical professionals. Pakistan has barely 3,000 intensive care beds in the entire country and doctors often warn that continued spikes in infections could overwhelm its poor health care system.

NEW DELHI — India has registered another single-day high of 7,466 coronavirus cases, surpassing China both in terms of confirmed cases and deaths from COVID-19.

The spike in infections in India comes at a time when the two-month-old lockdown across the country is set to end on Sunday. Prime Minister Narendra Modi’s government is expected to issue a new set of guidelines this weekend, possibly extending the lockdown in the worst-hit areas as it promotes economic activity.

UNITED NATIONS — The U.N. humanitarian chief is urgently appealing for $2.4 billion to help millions in war-torn Yemen cope with the conflict and COVID-19, saying programs are already being cut and the situation is “alarming.”

Mark Lowcock told a briefing Thursday that the U.N. has only received $516.6 million of the $3.4 billion it needs until the end of the year, amounting to just over 15%.

The United Nations and Saudi Arabia are co-hosting a virtual pledging conference for Yemen on Tuesday seeking $2.4 billion, including $80 million to respond to the pandemic.

Lowcock and the heads of 10 U.N. agencies and several U.N. officials and humanitarian organizations issued a joint statement Thursday saying “COVID-19 is spreading rapidly across the country already experiencing the world’s largest humanitarian crisis” as a result of the war, and expressing increasing alarm about the worsening situation.

“Tragically, we do not have enough money to continue this work,” they said. “Of 41 major U.N. programs in Yemen, more than 30 will close in the next few weeks if we cannot secure additional funds.”

“This means many more people will die,” they warned.

The 17 signatories said they have the skills, staff and capacity to meet the difficult challenges of delivering aid in Yemen, but no money. And time is running out.

“We ask donors to pledge generously and pay pledges promptly,” they said.

SYDNEY — An Australian state government has announced that as many people will be allowed in churches as in pubs after an archbishop complained of unfair pandemic rules.

Sydney Archbishop Anthony Fisher on Thursday encouraged Catholics to sign a petition calling on the New South Wales government to treat churches the same as pubs by increasing capacity limits from 10 to 50 people beginning June 1.

State Premier Gladys Berejiklian announced Friday that churches will also be allowed to increase congregation sizes from 10 on Monday in line with relaxed restrictions on pubs, cafes and restaurants.

“It is crucial that worshippers remember to follow health advice. This is particularly important for people with co-morbidities aged over 50 and people aged over 70,” Berejiklian said.

The government had been wary of adjusting the restrictions on places of worship after COVID-19 outbreaks in churches and church choirs overseas.

The state’s chief health officer, Kerry Chant, said places of worship need to find alternatives to practices that might spread the virus, like singing, sharing books and passing around collection plates.

“Communal singing and chanting should not occur because of the high risk of transmission,” Chant said.

At the height of its COVID-19 crisis in March, the country banned the export of masks and channeled most of the domestically made products to pharmacies, where people are currently limited to buying three masks per week.

While the nationwide rationing program was a drastic attempt at calming public anger over shortages, the supply has now stabilized, with local companies driving up their production capacity to more than 100 million masks per week, Food and Drug Safety Minister Lee Eui-kyung said Friday.

She said the relaxed export restrictions would help ease global shortages and “facilitate the spread of K-quarantine,” a term coined by the government to internationally promote its gains against the virus.

South Korea is already in the process of providing 1 million masks to foreign veterans of the 1950-53 Korean War and 370,000 others to tens of thousands of South Korea-born adoptees living in the West.

MANILA, Philippines — The Philippine president is relaxing a lockdown in the capital, the country’s epicenter of coronavirus infections, in a tightrope move amid an economic downturn and massive government spending to help feed millions of poor families restricted to their homes.

President Rodrigo Duterte said Thursday night that metropolitan Manila will be placed under a more relaxed quarantine Monday after more than two months of police- and military-enforced lockdown that restrained public mobility and most economic activities. The economy contracted in the first quarter in its weakest run in two decades.

Under the new arrangement, more work and business operations, along with public transport, will be allowed to resume, but physical distancing, face masks and other safeguards will continue to be required. Classes will remain suspended.

Duterte made the televised announcement hours after the Department of Health reported a single-day spike of 539 infections, more than 60% of them in the congested capital. That brought the total number of infections to 15,588, including 921 deaths.

Duterte warned the danger is far from over.

“Remember that the entire nation is still under quarantine,” Duterte said. “The state has every right to control your movement if you pass on a contagion to the population.”

SEOUL, South Korea — South Korea has reported 58 new cases of the coronavirus, all in the densely populated Seoul metropolitan area, as officials scramble to stem transmissions linked to a massive e-commerce warehouse near the capital.

The figures announced Friday by the Korea Centers for Disease Control and Prevention brought national totals to 11,402 infections and 269 deaths.

Prime Minister Chung Sye-kyun called for officials to examine working conditions at warehouses of online shopping companies, which have seen orders surge during the pandemic, and other congested workplaces where infection risks may be high.

Health authorities on Thursday said they found at least 82 infections linked to workers at a warehouse operated by local e-commerce giant Coupang in Bucheon, near Seoul. Officials had planned to complete testing on 4,000 workers and visitors to the warehouse.

Just 70 people remain hospitalized for treatment of COVID-19 and another 414 are being isolated and monitored as possible cases or after testing positive without showing symptoms. China has reported 4,634 deaths from the disease among 82,995 cases.