A prominent South Korean activist who was recently elected to the National Assembly denied on Friday that she misused public donations for Korean survivors of Japanese wartime sexual slavery.

Yoon Meehyang, who begins her four-year term as a lawmaker for the ruling liberal party on Saturday, responded in a news conference to questions raised by a 92-year-old former sex slave that prompted a probe by prosecutors and angry calls for her to resign from the legislature.

The former sex slave, Lee Yong-su, has also said in recent media interviews that Yoon and a support group for the victims she led until March preached hatred during nationalistic weekly rallies in front of the Japanese Embassy. Lee said the deep animosity between the two nations over their history can only be resolved through education and more exchanges with younger Japanese people. 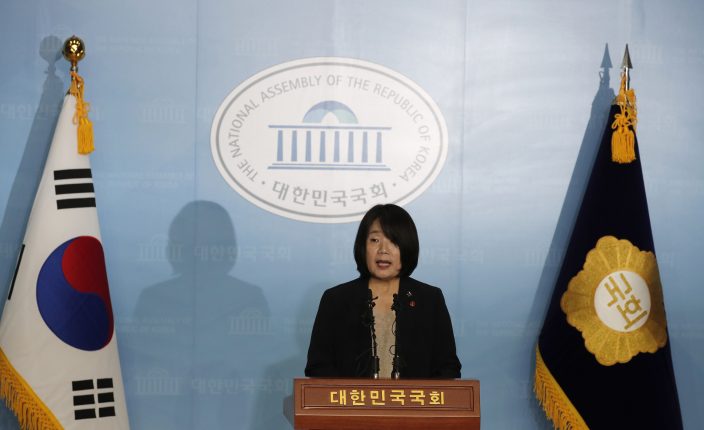 Activist Yoon Meehyang, who begins her four-year term as a lawmaker for the ruling liberal party on Saturday, speaks during a news conference at National Assembly in Seoul, South Korea, Friday, May 29, 2020. (AP PhotoLee Jin-man)

Historians say tens of thousands of women from around Asia, many of them Korean, were sent to front-line Japanese military brothels to provide sex for soldiers during World War II.

Reading a statement at the National Assembly, a tearful Yoon bowed and apologized for causing supporters of the movement “deep scars and concerns” and for failing to resolve what she described as a misunderstandings with Lee.

Yoon adamantly denied allegations by local media that she and the group refused to help the victims and used the funds instead for private gain, such as real-estate purchases or financing the overseas studies of Yoon’s daughter. 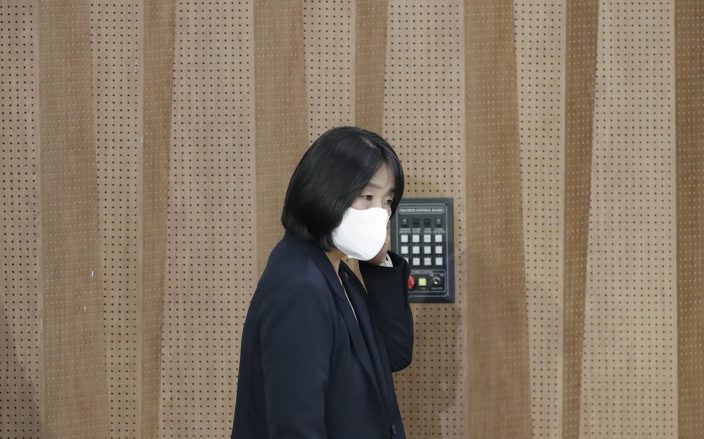 Activist Yoon Meehyang, who begins her four-year term as a lawmaker for the ruling liberal party on Saturday, wearing a face mask, arrives for a news conference at National Assembly in Seoul, South Korea, Friday, May 29, 2020. (AP PhotoLee Jin-man)

Yoon promised to cooperate with prosecutors, who recently searched the Seoul office of her former group, the Korean Council for Justice and Remembrance for the Issues of Military Sexual Slavery by Japan.

“The claim that we never gave victims the money we raised from the public to provide cash help isn’t true,” Yoon said, insisting that the criticism ignores the movement’s accomplishments over the past three decades.

Yoon also denied speculation that she pressured victims not to accept money from a Tokyo-funded foundation that was established after a 2015 agreement between the countries to settle their decades-long dispute over the sexual slavery.

The 2015 deal, negotiated by South Korea's previous conservative government, was hugely unpopular among South Koreans, many of whom said the government settled for far too little and accused Tokyo of attempting to silence the victims with money. There is also criticism that Japan still hasn’t fully acknowledged legal responsibility for atrocities during its 1910-45 colonial rule of the Korean Peninsula.

“We left it up to the victims to decide whether they would receive the money,” Yoon said.

The public rift between Yoon and Lee shocked many because they for years led rallies in front of the Japanese Embassy demanding that Tokyo more fully acknowledge the suffering of the “comfort women,” the euphemism given by Japan to the women and girls enslaved by the Japanese army during the war and the term embraced by some of the dwindling number of survivors instead of “sex slave.”

Relations between South Korea and Japan recently plunged to their lowest point in years amid their continuing disputes over history, which also include Japan’s refusal to compensate forced Korean laborers during its colonial rule.

The disputes escalated into a trade war last year in which both sides downgraded the other’s trade status. It spilled over into military matters when Seoul threatened to end a 2016 military intelligence-sharing agreement with Tokyo, although it ended up keeping the pact following pressure from Washington.

Under the 2015 agreement, which was described by both governments as “irreversible,” Japan pledged to provide 1 billion yen ($9 million) to a Seoul-based foundation to help the victims of sexual slavery.

South Korea, in exchange, offered a vague commitment to try to resolve Japanese grievances over a statue of a girl representing victims of sexual slavery that sits in front of the Japanese Embassy in Seoul.

The government of President Moon Jae-in, who took office in 2017, effectively killed the agreement by taking steps to dissolve the foundation, saying that the deal lacked legitimacy because officials failed to properly communicate with victims before reaching it.

At the time of the 2015 deal, Seoul said there were 46 known surviving South Korean victims, but only 17 are now alive.