Ai was arrested at Beijing's airport in April 2011 and held for 81 days without explanation during a wider crackdown on dissent that coincided with the international ferment of the Arab Spring.

In an interview with The Associated Press, Ai said he identifies with Hong Kong’s democracy movement and has been working on a documentary about protests that began a year ago, at times erupting into tear gas-shrouded combat between police and demonstrators. 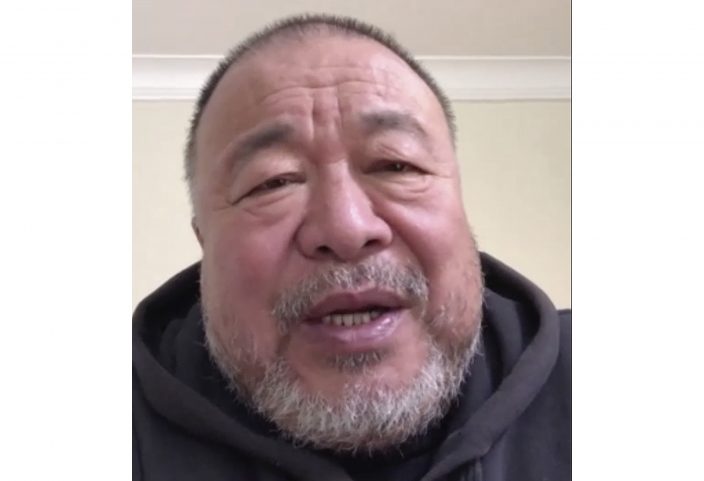 In this image made from a Skype video interview with Chinese artist dissident Ai Weiwei comments on the recent security law planned for Hong kong from a location in Cambridge, England, Wednesday, May 27, 2020. Ai Weiwei believes the newly passed national security law for Hong Kong augurs the end for the semi-autonomous city. (AP PhotoPark Juwon)

“I experienced every detail of who they (the protesters) are, how they fight and how this is going to end,” Ai said. “They are so determined and very pure. So those stories are really, really hurting me.”

Many in Hong Kong fear their city will become like any other in mainland China after the National People's Congress in Beijing approved the national security law. It targets people and groups suspected of sedition or other threats to safety and security and follows recent arrests of many leading pro-democracy activists in the former British colony.

According to Ai, the new measure is “not lawful” because even the Chinese state hasn't established “its own legitimacy of control.”

China's communist leaders promised to allow Hong Kong to keep its own customs territory and financial system, laws and civil liberties for 50 years after Beijing took control in 1997. Critics of the new law say it may allow mainland security organs to interfere in local law enforcement, among other things.

“So, China promised ‘one country, two systems’ for 50 years, now it’s far from that,” Ai said from his home in Cambridge, England. “They violated their own words. So, that’s more dangerous because once you’ve lost the trust of the international community, who’s going to (have a) dealing or have a business with someone like this?”

“In old China, we have a word that means if you say something, it has to be trusted," he said.

Hong Kong's status as a safe haven for dissent has been deteriorating for years, Ai said, pointing to abductions of business figures embroiled in mainland Chinese business disputes, among others.

In one of the best known cases, five Hong Kong booksellers went missing in 2015 and were later found to have been detained in China for selling books critical of the government.

“Many people still disappeared and nobody knows where they are,” he said. “So Hong Kong cannot allow this to happen.”

Ai also mentioned the disappearance 25 years ago of a boy chosen by the Dalai Lama, the exiled Tibetan spiritual leader, to be Tibetan Buddhism’s second-highest figure.

“Nobody knows where this lama is and where his family is. And all of those human rights lawyers disappeared,” Ai said. “I was disappeared,” he said, referring to his more than two months of detention in 2011.

When Ai was released, it was announced that he had confessed to tax evasion and fined $2.4 million bill. He has since left China on his Chinese passport and legally has the right to return. His last visit to the Chinese mainland was a few months after he first left in July 2015, his studio said.

Before protesters turned the glitzy financial center into a canvas of anti-government graffiti, Hong Kong was famous for its bustling art scene — home to the annual Art Basel and many independent galleries.

When asked about Hong Kong's future, Ai said the definition of art has been changing amid the unrest. Protest itself is a form of art, he said.

“When you see what happened in Hong Kong with the protesters, the way they organize through the internet, every day they would create hundreds of different posters so fast," he said.

"No any other art industry in the world can catch (up to) that kind of flexibility,” he said, referring to countless posters and graffiti slogans on Hong Kong’s once-spotless walls, concrete barriers, roads, and tram tracks.

Ai’s no stranger to documenting current events. In 2003, he produced a documentary film called “Eat, Drink, and Be Merry,” capturing carefree moments of his brother and friends against the backdrop of SARS, an infectious respiratory disease that hit Asia in 2003.

He has now turned his attention to Wuhan, the central Chinese city that became the origin of the coronavirus pandemic.

Ai said his artist friends in Wuhan have been sending him footage, even from a hospital, giving him multi-angled glimpses of vulnerable and fleeting moments of the city during its unprecedented lockdown.

“I think China has handled it better (than SARS) because they’re much more experienced,” Ai said. But he said there’s still a lack of transparency.

“They (Chinese government) intentionally covered (up) the whole pandemic as a secret for many weeks,” Ai said. “In a certain sense, they will never change.”