A white Minneapolis police officer and the black man he's charged with killing both worked as security guards at the same Latin nightclub as recently as last year, but its former owner says she’s not sure if they knew each other.

What she is certain of is how aggressive Officer Derek Chauvin became when the club hosted events that drew a mainly black clientele, responding to fights by taking out his mace and spraying the crowd, a tactic she told him was unjustified “overkill.”

“He would mace everyone instead of apprehending the people who were fighting," said Maya Santamaria, former owner of El Nuevo Rodeo club in Minneapolis. “He would call backup. The next thing you would know, there would five or six squad cars.”

A lone protester sits down by state troopers as they block a street Friday, May 29, 2020 after another night of protests over the death of George Floyd who died in police custody Monday in Minneapolis. (AP PhotoJim Mone)

Chauvin became the focus of outrage and four days of street protests across the nation this week after he was seen on cellphone video kneeling on the neck of George Floyd for more than eight minutes during his arrest on suspicion of passing a counterfeit bill. Floyd died in custody and Chauvin was fired Tuesday and arrested Friday on charges of third-degree murder and manslaughter. The three other officers who took part in the arrest were also fired, and they remain under investigation.

While Chauvin's off-duty job at the El Nuevo Rodeo club stretched over 17 years until a few months ago, Floyd only started working there recently as a bouncer and only worked about a dozen events put on by “African American promoters.”

Santamaria, who sold the venue within the past two months, said she doesn’t believe the two men knew each other prior to their fateful encounter Monday night. If Chauvin had recognized Floyd, she said, "he might have given him a little more mercy.” 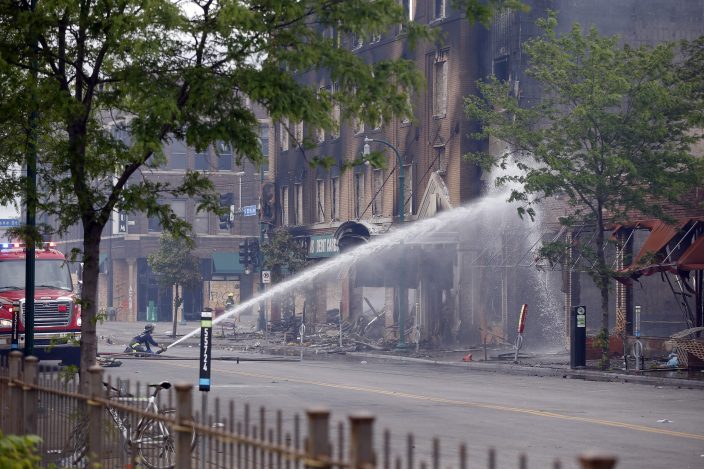 A firefighter directs water on a burned building, Friday, May 29, 2020 after another night of protests, fires and looting over the arrest of George Floyd who died in police custody Monday night in Minneapolis after video shared online by a bystander showed a white officer kneeling on his neck during his arrest as he pleaded that he couldn't breathe. (AP PhotoJim Mone)

She said Chauvin got along well with the club's Latino regulars, but his tactics toward unruly customers on what she referred to as “African American” nights led her to speak to him about it.

“I told him I thought this is unnecessary to be pepper-sprayed. The knee-jerk reaction of being afraid, it seemed overkill," Santamaria said. "It was a concern and I did voice my opinion, but police officers have a way of justifying what they do.”

She said she was shocked to see the video of Chauvin pinning Floyd to the ground with his knee, even as Floyd complained that he couldn't breathe. 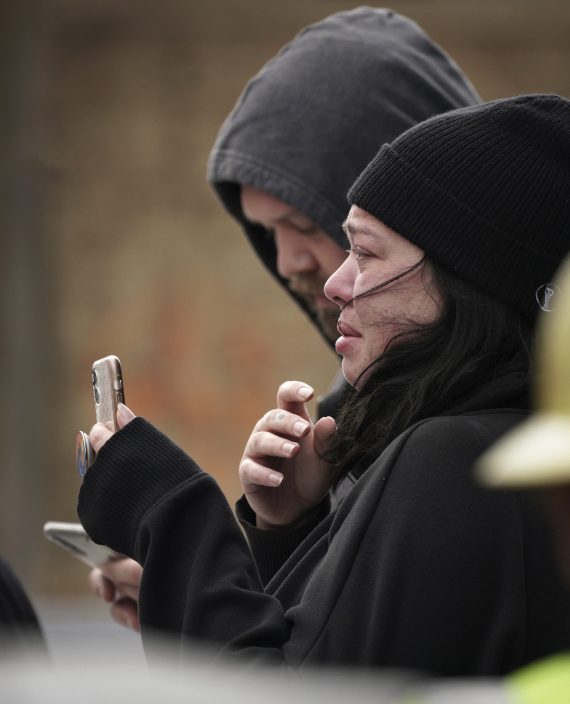 Brenda Lenton is in tears as she watches her apartment burn above the Foot Locker store on Lake Street near Chicago Avenue on Friday, May 29, 2020, in Minneapolis. Lenton had just moved into downtown and was excited to start a new life in the city when everything was taken away in the fire. Minneapolis residents awoke Friday to assess the damage after rioters ignited fires and looted stores all over the city, as peaceful protests turned increasingly violent in the aftermath the death of George Floyd during an arrest. (Brian PetersonStar Tribune via AP)

“I thought he would have more of a conscience," she said. “Even if he is a bit of racist, he's a human being. … At what point does your humanity overpower your racial bias?”

Outside Chauvin’s home in Minnesota on Thursday, a message of anger aimed at the former officer was painted in red on his driveway: “murderer.” 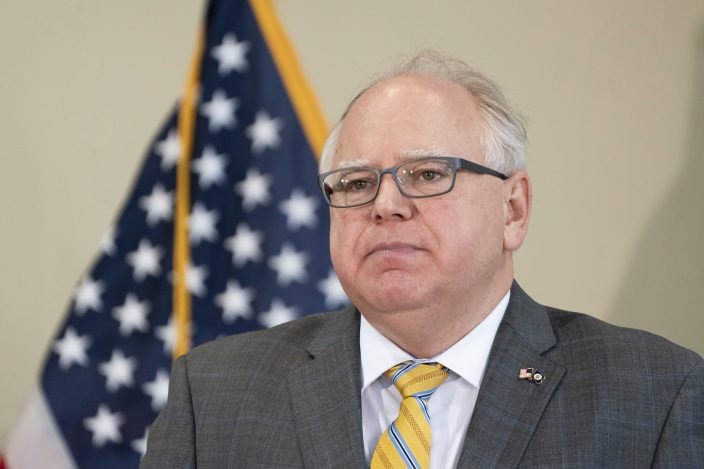 Minnesota Gov. Tim Walz speaks during a news conference Friday, May 29, 2020, St. Paul, Minn., as he talked about the unrest in the wake of the death of George Floyd while he was in custody of Minneapolis police.(Glenn StubbeStar Tribune via AP, Pool)

On Friday, protesters gathered in front of another Chauvin home in Windemere, Florida, which he has owned since 2011 with his wife, Kellie, a Laotian refugee, realtor and former Mrs. Minnesota pageant winner.

Both Chauvin and his wife have registered to vote there, rather than in Minnesota, records show. Chauvin last cast a ballot in Florida in November 2018. His wife’s registration is listed as inactive. Both are Republicans.

“I don’t mind peaceful protests at all," said Oscar Reyes who lives across the street in the quiet neighborhood near Orlando. "I hope everything stays safe.”

The Foot Locker Store and the apartments above it burn along Lake Street in the morning on Friday, May 29, 2020, in Minneapolis. Minneapolis residents awoke Friday to assess the damage after rioters ignited fires and looted stores all over the city, as peaceful protests turned increasingly violent in the aftermath the death of George Floyd during an arrest. (Brian PetersonStar Tribune via AP)

A reader recently reached out afte ...