Democrats announced Friday that they are expanding their investigation into the firing of State Department Inspector General Steve Linick, part of an effort to find out more about President Donald Trump’s moves to sideline several independent government watchdogs.

The Democrats plan to interview officials in the administration who may have more information about Linick's abrupt dismissal on May 15, including about whether Secretary of State Mike Pompeo recommended the firing for retaliatory reasons. Pompeo has denied Linick’s firing was retaliatory but has not given specific reasons for his dismissal.

“If Secretary Pompeo pushed for Mr. Linick’s dismissal to cover up his own misconduct, that would constitute an egregious abuse of power and a clear attempt to avoid accountability,” the Democrats said in a joint statement. 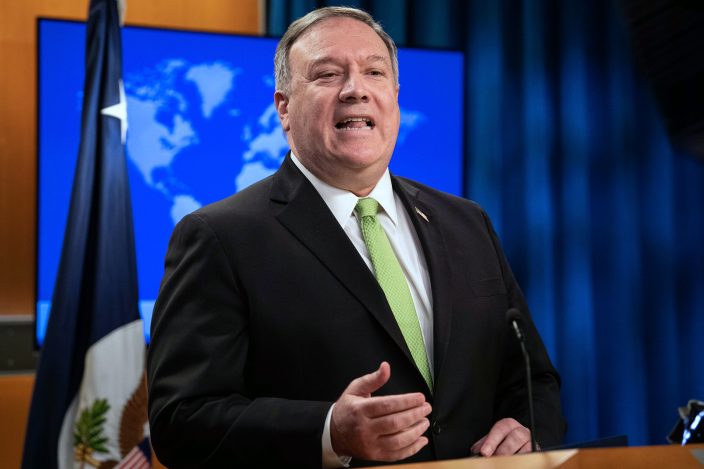 Secretary of State Mike Pompeo speaks during a press briefing at the State Department on Wednesday, May 20, 2020, in Washington. (Nicholas KammPool Photo via AP)

Democrats and some Republicans have pushed the administration for more answers about the firings, but the White House has provided few, simply stating the dismissals were well within Trump's authority.

Pompeo said after the firing that he had been concerned about the inspector general’s work for some time and that he regretted not calling for his dismissal earlier. He said he recommended to Trump that Linick be terminated.

Linick is one of several inspectors general whom Trump has removed from office, sparking outrage among Democrats who say the administration is undermining government accountability. Linick was an Obama administration appointee whose office was critical of what it saw as political bias in the State Department’s current management but had also taken issue with Democratic appointees.

He also played a small role in Trump’s impeachment last year. In October, Linick turned over documents to House investigators that he had received from a close Pompeo associate that contained information from debunked conspiracy theories about Ukraine’s role in the 2016 U.S. election. Democrats were probing Trump’s pressure on Ukraine to investigate Democrats.

Linick is the second inspector general to be fired who was involved with the impeachment process. Michael Atkinson, the former inspector general for the intelligence community, triggered the impeachment probe when he alerted Congress about a whistleblower complaint that described a call between Trump and Ukraine’s president last summer. Trump fired Atkinson in April, saying he had lost confidence in him.

Engel and Menendez earlier demanded that administration officials preserve and turn over all records related to Linick’s dismissal. They said they have received no information so far.

Sen. Chuck Grassley, R-Iowa, has said the White House is legally required to provide more answers to Congress about the firings and gave Trump a deadline to give them. But in a letter to Grassley this week, the administration offered no new details about why they were let go.

The response from White House counsel Pat Cipollone said that Trump has the authority to remove inspectors general, that he appropriately alerted Congress and that he selected qualified officials as replacements.

“When the President loses confidence in an inspector general, he will exercise his constitutional right and duty to remove that officer — as did President Reagan when he removed inspectors general upon taking office and as did President Obama when he was in office,” Cipollone wrote.

The president also moved to replace the chief watchdog at the Department of Health and Human Services, Christi Grimm, who testified that her office was moving ahead with new reports and audits on the department’s response to the coronavirus pandemic despite Trump’s public criticism of her.

A French man accused of molesting ...

White House defends, but does not explain, watchdog firings