Greek officials said Saturday that the country will not limit arriving airline passengers next month to people coming from 29 countries but that travelers who departed from places that aren't on the initial list will be subject to mandatory testing for the coronavirus upon arrival and a quarantine period of one or two weeks.

The two-tiered policy, which revised information the Greek government issued Friday, will be applied during June 15-30, although officials left open the possibility of maintaining entry restrictions after the end of June.

High-ranking tourism ministry officials said the government needed to clarify the purpose of the 29-country list during the coronavirus pandemic, pointing to a statement posted on the Foreign Ministry's website. The officials spoke to The Associated Press on condition of anonymity because of the issue was politically sensitive. 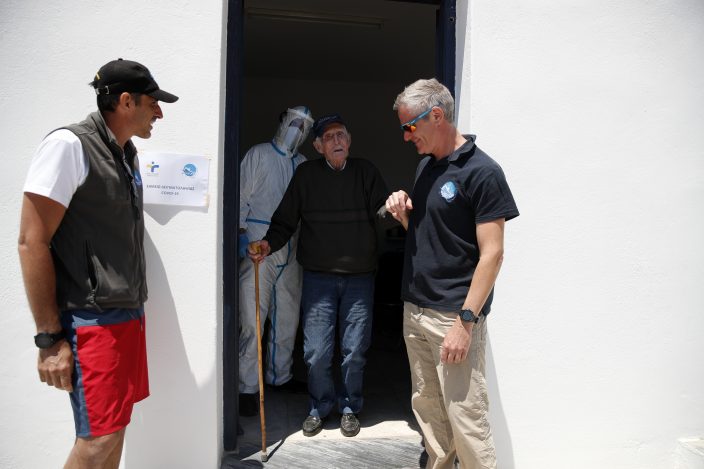 In this Monday, May 25, 2020 photo, the 93-year old local resident Dimitris Karistinaios is helped by Dimitris Dardamanis, member of the non-for-profit Organization Symplefsi, after being tested for coronavirus on the Aegean Sea island of Folegandros, Greece. Using dinghies, a GPS, and a portable refrigerator, state doctors have launched a COVID-19 testing drive on islands in the Aegean Sea ahead of the holiday season. The first round of testing was completed after trips to the islands of Milos, Kimolos, Folegandros, and Sikinos. (AP PhotoThanassis Stavrakis)

According to the officials and the foreign ministry document, a limited number of international flights will continue only being allowed to land at Athens International Airport until June 15. Per European Union policy, every arriving passenger must be tested for the virus and stay overnight at a designated hotel.

Visitors who test negative are required to self-quarantine for 7 days, while the ones who test positive must spend 14 days under a supervised quarantine.

Greece is taking steps to welcome more visitors in time for the summer vacation season. Starting June 15, international flights also can land in Thessaloniki, the country's second-largest city. Those from the 29 designated countries, the majority of them in Europe, will be subject to random tests. 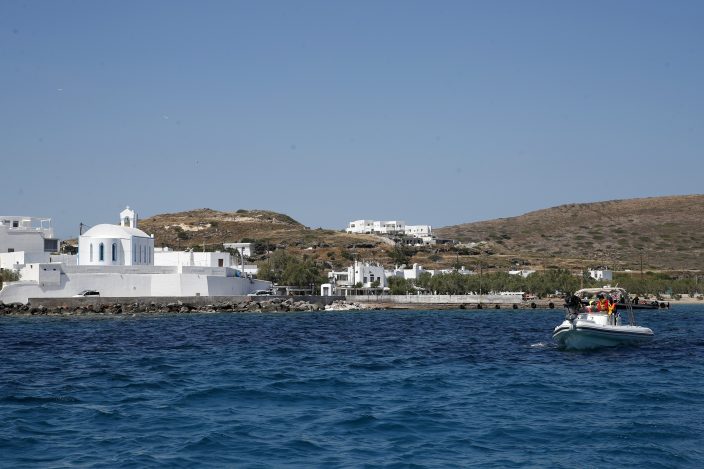 In this Monday, May 25, 2020 photo, medical staff in a dinghy leaves from the Aegean Sea island of Milos to Sikinos island, Greece. Using dinghies, a GPS, and a portable refrigerator, state doctors have launched a COVID-19 testing drive on islands in the Aegean Sea ahead of the holiday season. The first round of testing was completed after trips to the islands of Milos, Kimolos, Folegandros, and Sikinos. (AP PhotoThanassis Stavrakis)

Passengers from all other countries will have to continue getting tested, staying overnight at specific hotels, and quarantining for either seven or 14 days.

The list was drawn up based on a document from the European Union Aviation Safety Agency of airports worldwide “located in affected areas with high risk of transmission of the COVID-19 infection.”

Starting July 1, all Greek airports that can handle international traffic will reopen to flights from abroad. At that time, random screening for the virus will apply to all arriving passengers unless public health considerations dictate stricter testing, a tourism ministry official said.

“Greece at any stage retains the right to modify any of the above in light of changing circumstances,” the Foreign Ministry document states.

Greece imposed a lockdown early in its coronavirus outbreak, a move credited with limiting infections. The country had a total of 175 deaths and 2,915 confirmed cases as of Saturday. No cases have been detected on the vast majority of the Greek islands, which are popular vacation spots.

Tourism and related industries make up around 20% of the Greek economy, and the government has been anxious to ensure the tourist season is not lost this year. According to the Tourism Ministry, 350,000 jobs depend directly on tourism, as many as double that number indirectly.

At this point “we are at point zero” concerning relaunching tourism traffic lost during the pandemic, a tourism ministry official told the AP, adding that it will take at least two or three weeks to see if bookings start to pick up.