Bobby Joe Morrow, the Texas sprinter who won three gold medals in the 1956 Melbourne Olympics while a student at Abilene Christian University, died Saturday. He was 84.

Morrow's family said he died of natural causes at home in San Benito.

Morrow won the 100 and 200 meters in Melbourne and anchored the United States’ champion 400 relay team, matching the world record of 20.6 seconds in the 200 and helping the relay squad set a world record. 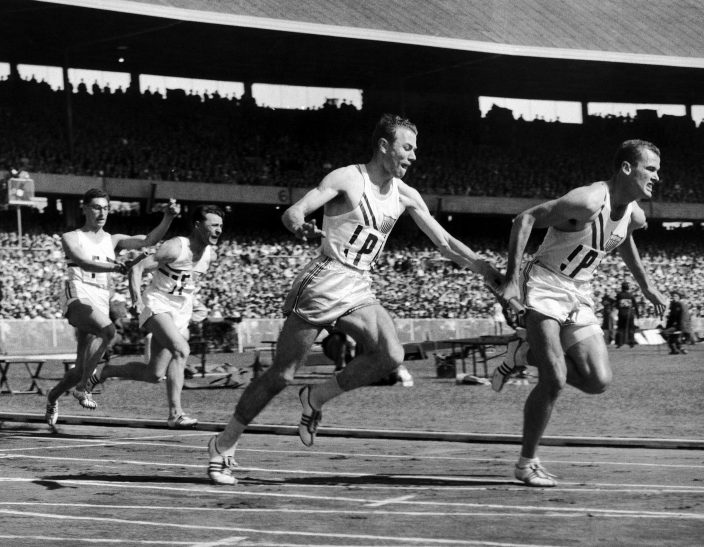 FILE - In this Nov. 30, 1956, file photo, Thane Baker, of the United States, hands to Bobby Joe Morrow for the last baton change in the first heat of the first round of the 4 x 100 meters Summer Olympic Games relay event in Melbourne, Australia. Morrow, the Texas sprinter who won three gold medals in the 1956 Melbourne Olympics while a student at Abilene Christian University, died Saturday, May 30, 2020. He was 84. (AP PhotoPool, File)

Earlier in 1956 he successfully defended his AAU 100-yard title and swept the sprints for Abilene Christian at the national college championships. He was honored as “Sportsman of the Year” by Sports Illustrated, and won the AAU's James E. Sullivan Award the following year.

“Our thoughts and prayers are with the Morrow family,” Abilene Christian tweeted on its sports account.

Morrow spent most of his life in the Rio Grande Valley along the Gulf of Mexico near the Mexican border. He was born in Harlingen and grew up in San Benito. He starred in track and football at San Benito High School, where the football stadium is named Bobby Morrow Stadium.

Morrow was inducted into the National Track and Field Hall of Fame in 1989.

Sessions vies for Senate comeback in race shadowed by T ...