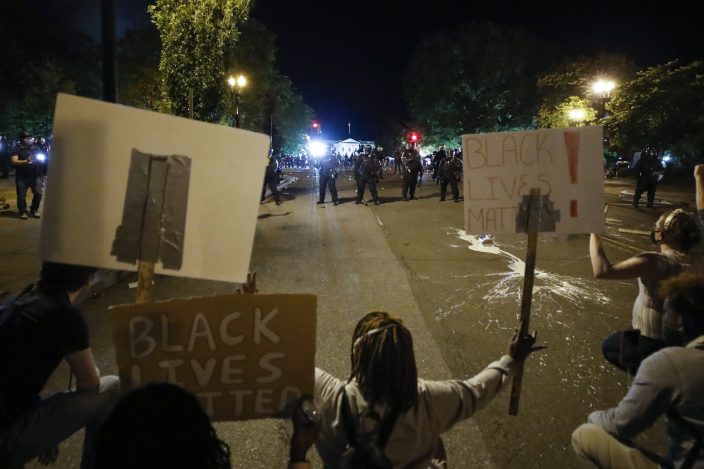 Demonstrators pprotest the death of George Floyd, Sunday, May 31, 2020, near the White House in Washington. Floyd died after being restrained by Minneapolis police officers (AP PhotoAlex Brandon)

AMERICA PROTESTS — Tens of thousands of protesters took to the streets across America again, with peaceful demonstrations against police killings of black people overshadowed by unrest that ravaged cities from Philadelphia to Los Angeles and flared near the White House. City and state officials deployed thousands of National Guard soldiers, enacted strict curfews and shut down mass transit systems to slow protesters’ movements, but that did little to stop parts of many cities from again erupting into mayhem. By Ashraf Khalil, Aaron Morrison and Tim Sullivan. SENT: 1,300 words, photos, videos, graphic. With AMERICA PROTESTS-THE LATEST.

AMERICA-PROTESTS-POLICE-TACTICS — As protests grip the nation, officers have doused crowds with pepper spray, struck protesters with batons, steered police cars into throngs, shoved demonstrators and screamed curses. Some police action has been directed against people smashing windows, breaking into stores and burning cars, but many find other instances more difficult to understand — like the elderly man knocked over by police as he walked with a cane on a Salt Lake City sidewalk. By Jay Reeves and Kat Stafford. SENT: 1,020 words, photos. 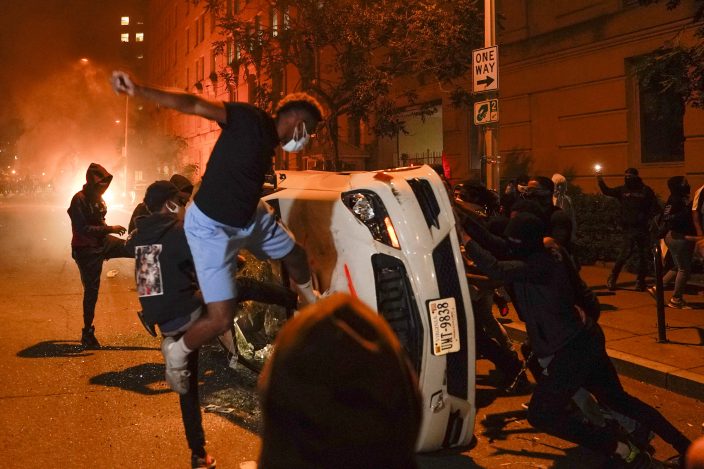 Demonstrators protest the death of George Floyd, Sunday, May 31, 2020, near the White House in Washington. Floyd died after being restrained by Minneapolis police officers. (AP PhotoEvan Vucci)

AMERICA-PROTESTS-CORONAVIRUS-TRACKING — Protests erupting across the nation over the past week — and law enforcement’s response to them — are threatening to upend efforts by health officials to track and contain the spread of coronavirus just as those efforts were finally getting underway. By Medical Writer Mike Stobbe. SENT: 790 words, photos. Also see MORE ON AMERICA PROTESTS below.

VIRUS OUTBREAK — Protests around the U.S. against police brutality spark fears of a further spread of the coronavirus, while South Korea is reporting a steady rise in cases around the capital after appearing to bring the outbreak under control. By Kelli Kennedy, Danica Kirka and Pablo Gorondi. SENT: 1,040 words, photos. With VIRUS-OUTBREAK-THE-LATEST. Also see MORE ON THE VIRUS OUTBREAK below. A man, left, is taken into custody when police stop his car after curfew Sunday, May 31, 2020, in Minneapolis. Protests continued following the death of George Floyd, who died after being restrained by Minneapolis police officers on Memorial Day. (AP PhotoJulio Cortez)

ELECTION 2020-VOTING — Tuesday’s primaries in eight states are the biggest test to date of campaigning in the coronavirus era, a way for parties to test-drive new strategies of getting out the vote when it can be dangerous to leave your home. By Nicholas Riccardi and Marc Levy. SENT: 1,050 words, photos. 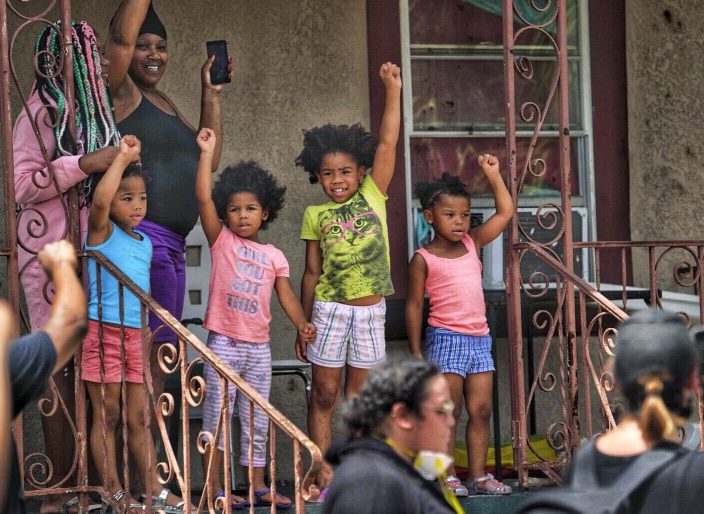 People show their support for a Black Lives Matter march as it passes Sunday, May 31, 2020, in Tampa, Fla. For a second day in a row protestors took to the streets of Tampa to protest the death of George Floyd, who died May 25 after he was pinned at the neck by a Minneapolis police officer. (Martha Ascencio-RhineTampa Bay Times via AP)

AMERICA PROTESTS-WORLD REACTION — Several thousand people march in New Zealand’s largest city to protest the killing of George Floyd in the U.S. as well as to stand up against police violence and racism in their own country. SENT: 500 words, photos. 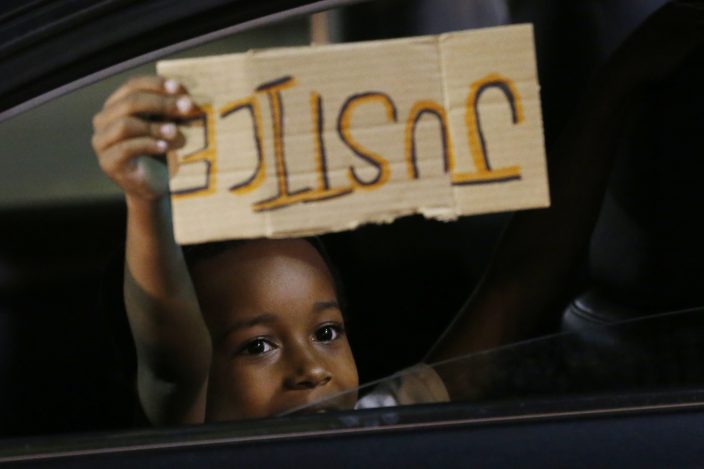 A young boy holds a "Justice" sign as he peers outside the window of a car passing protesters marching through downtown for a third night of unrest Sunday May 31, 2020, in Richmond, Va. Gov. Ralph Northam issued a curfew for this evening. (AP PhotoSteve Helber)

AMERICA PROTESTS-BEHIND THE PROTESTS — U.S. officials sought to determine whether extremist groups had infiltrated police brutality protests across the country and deliberately tipped largely peaceful demonstrations toward violence — and if foreign adversaries were behind a burgeoning disinformation campaign on social media. SENT: 1,400 words, photos. With TRUMP — Trump took shelter in White House bunker as protests raged.

AMERICA PROTESTS-NYC — A fourth day of protests against police brutality keeps New York City on edge, as thousands of people march and many protesters and officers tried to keep the peace after days of unrest that left police cars burned and hundreds of people under arrest. SENT: 1,130 words, photos, video. People kneel in front of the Hall of Justice in San Francisco, Sunday, May 31, 2020, at protests over the Memorial Day death of George Floyd. Floyd was a black man who was killed in police custody in Minneapolis on May 25. (AP PhotoJeff Chiu)

AMERICA PROTESTS-MINNEAPOLIS-PROSECUTOR — Minnesota’s governor says that the state’s attorney general — and not the county prosecutor — will take the lead in any prosecutions related to the death of George Floyd. SENT: 950 words, photos.

AMERICA PROTESTS-CHICAGO — While Chicago officials took extraordinary steps to patrol and restrict access to downtown in the hopes of preventing further chaos after tense weekend protests over the death of George Floyd, destruction and unrest spread to the city’s neighborhoods and suburbs. SENT: 760 words, photos. 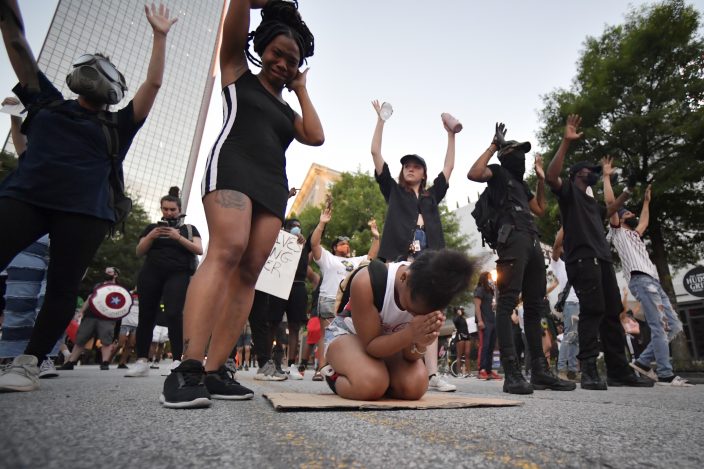 Demonstrators pray during a march, Sunday, May 31, 2020, in Atlanta. Protests continued following the death of George Floyd, who died after being restrained by Minneapolis police officers on May 25. (AP PhotoMike Stewart)

AMERICA PROTESTS-MINNEAPOLIS-FREEWAY PROTESTERS — Thousands of people marching on a closed Minneapolis freeway over the death of George Floyd duck for their lives when a semitrailer rolled into their midst. SENT: 300 words, photos. 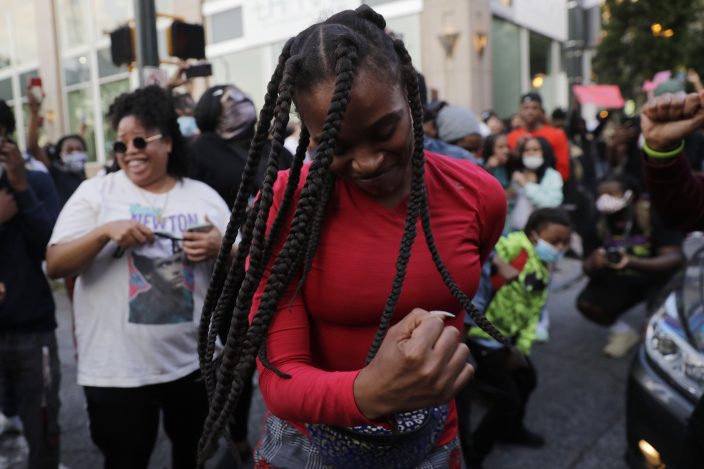 Demonstrators march, Sunday, May 31, 2020, in Atlanta. Protests continued following the death of George Floyd, who died after being restrained by Minneapolis police officers on May 25. (AP PhotoBrynn Anderson)

VIRUS OUTBREAK-CONGRESS — As local leaders plead for more federal aid amid the coronavirus outbreak, the Senate resumes session with no immediate plans to consider a fresh round of relief and focusing instead on trimming unemployment benefits and getting Americans back to work. By Congressional Correspondent Lisa Mascaro. SENT: 840 words, photos.

VIRUS-OUTBREAK-LIVES-LOST-CENTENARIAN — Phyllis Antonetz’s grandchildren proclaimed her the Greatest of All Time and speculated she might last forever, this force of nature whose life stretched so long that it was bookended by two great pandemics. By National Writer Matt Sedensky. SENT: 680 words, photos. 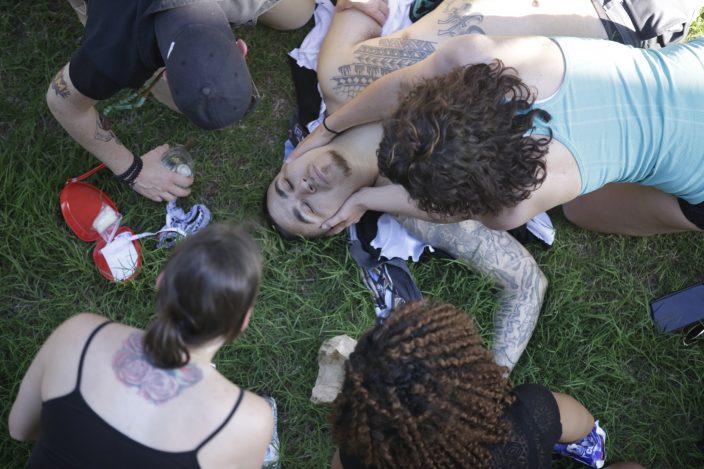 This man fell off an overpass as multiple people were injured on Interstate 244 when a truck pulling a horse trailer drove through a group of protesters blocking the highway during a protest march for George Floyd in Tulsa, Okla., Sunday, May 31, 2020. Floyd died May 25 after he was pinned at the neck by a Minneapolis police officer. (Mike SimonsTulsa World via AP)

VIRUS OUTBREAK-ONE GOOD THING-NEPAL SACRIFICE — When no ambulance would pick up the body of the first victim of the coronavirus in Nepal, a small group of volunteers transported the remains for cremation. SENT: 670 words, photos, video.

VIRUS OUTBREAK-INDIA — More states open up and crowds of commuters trickle onto the roads in many of India’s cities as a three-phase plan to lift the nationwide coronavirus lockdown started despite an upward trend in new infections. SENT: 450 words, photos.

VIRUS OUTBREAK-ASIA — Traffic jams and crowds of commuters return to the Philippine capital, as the metropolis relaxes antivirus measures in a high-stakes gamble to slowly reopen the economy while fighting the coronavirus pandemic. SENT: 640 words, photos. 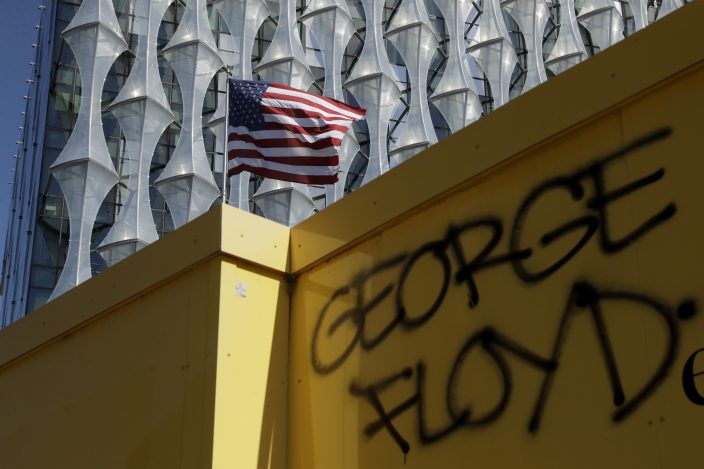 George Floyd's name stands written outside the U.S. embassy after people marched there from Trafalgar Square in central London on Sunday, May 31, 2020, to protest against the recent killing of George Floyd in Minneapolis, USA. US Police officers have been detained in connection with the death of George Floyd that has led to protests in many countries and across the U.S.(AP PhotoMatt Dunham) 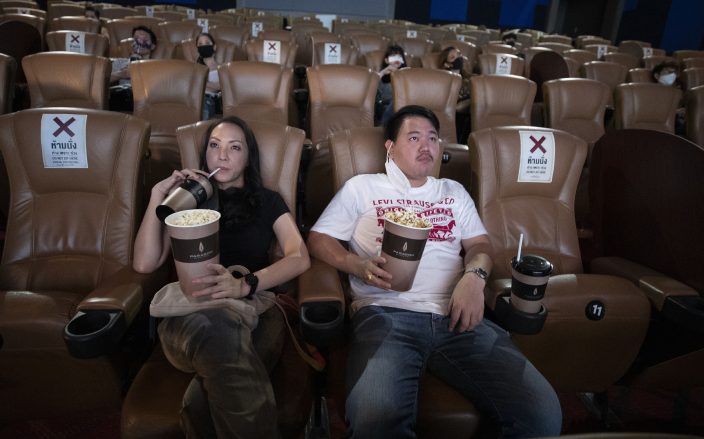 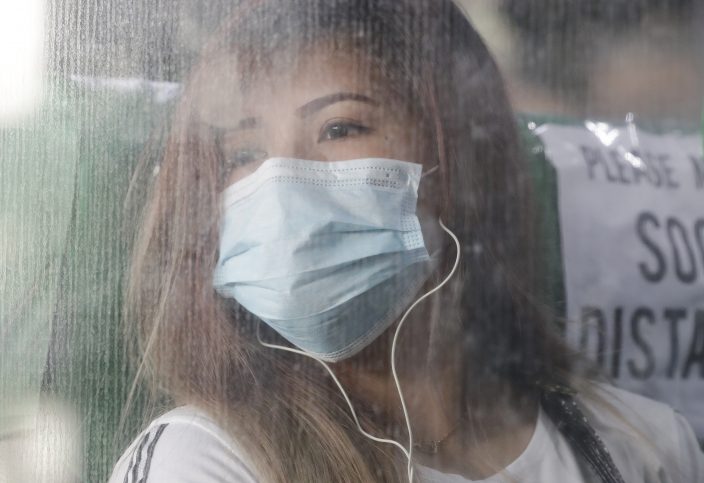 A woman wearing a protective mask looks out from a bus during the first day of a more relaxed lockdown that was placed to prevent the spread of the new coronavirus in Manila, Philippines on Monday, June 1, 2020. Traffic jams and crowds of commuters are back in the Philippine capital, which shifted to a more relaxed quarantine with limited public transport in a high-stakes gamble to slowly reopen the economy while fighting the coronavirus outbreak. (AP PhotoAaron Favila) 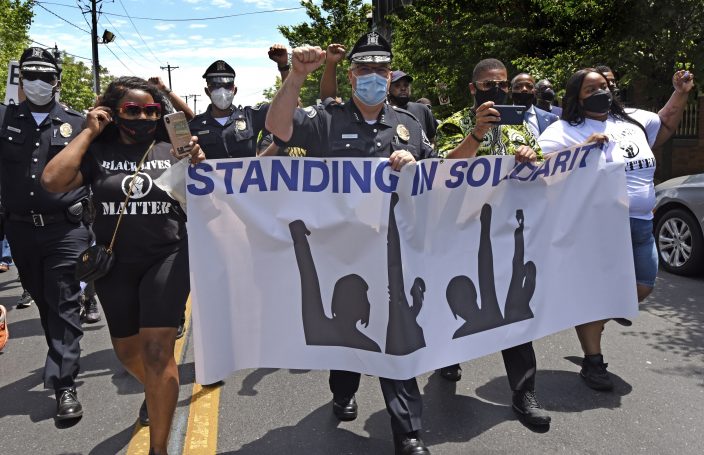 In this Saturday, May 30, 2020, photo, Camden County Metro Police Chief Joe Wysocki raises a fist while marching with Camden residents and activists in Camden, N.J., to protest the death of George Floyd in Minneapolis. Police officers in one of New Jersey's largest and most violent cities were praised on social media for marching alongside protesters in rallies held this weekend over Floyd's death. (April Saul via AP) 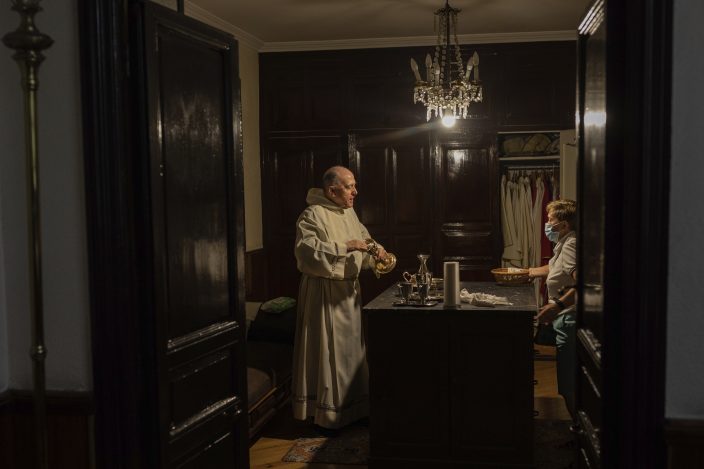 Catholic priest Pedro Luis, left, talks with a church volunteer, wearing face mask protection to prevent the spread of the coronavirus, after a mass at the San Ildefonso church in Madrid, Spain, Sunday, May 31, 2020. (AP PhotoBernat Armangue)

YEMEN-AID AT RISK — Aid organizations are making an urgent plea for funding to shore up their operations in war-torn Yemen, saying they have already been forced to stop some of their work even as the coronavirus rips through the country. SENT: 1,070 words, photos. 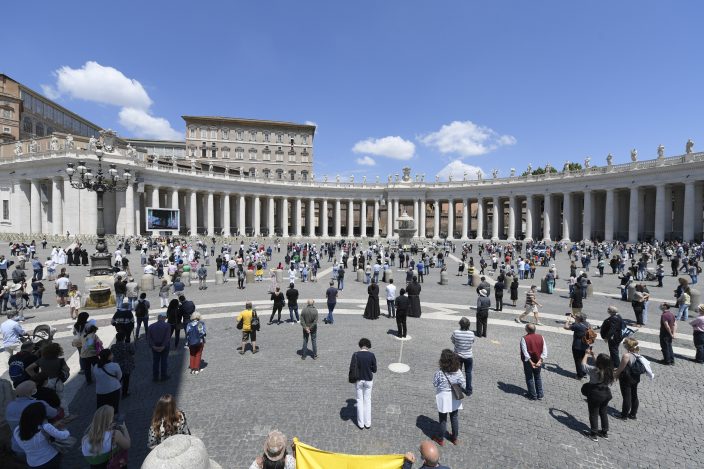 Faithful gather in St. Peter's Square at the Vatican, Sunday, May 31, 2020. Pope Francis has cheerfully greeted people in St. Peter’s Square on Sunday, as he resumed his practice of speaking to the faithful there for the first time since lockdown began in Italy and at the Vatican in early March. Instead of the tens of thousands of people who might have turned out on a similarly brilliantly sunny day like this Sunday, in pre-pandemic times, perhaps a few hundred came to the square, standing well apart from others or in small family groups (Vatican News via AP)

FATAL POLICE SHOOTING-KENTUCKY — The gunfire that killed a black woman Breonna Taylor and wounded one of the plainclothes police detectives who crashed through her front door fueles a debate over so-called no-knock warrants. SENT: 980 words, photos. In this photo taken on Thursday, May 28, 2020, Father Yaroslav Rokhman, Ukrainian Greek Catholic Church priest, wearing protective gear to protect against coronavirus, blesses a patient of a hospice in Ivano-Frankivsk, Ukraine. Rokhman, a priest in the Ukrainian Greek Catholic Church, is pleased to be able to return to performing one of a cleric's most heartfelt duties. As the coronavirus pandemic's grip on Ukraine slowly recedes, priests received permission on May 22 to again hold services and visit the sick. (AP PhotoEvgeniy Maloletka)

VIRUS-OUTBREAK-STADIUMS-AIR-WE-BREATHE — The distinctive atmosphere of live sports will return in time as pandemic restrictions are eased, but will that very air be safe in a closed arena with other fans in attendance? By Sports Writer Dave Campbell. SENT: 920 words, photos.

After 26 consecutive years in offi ...

The plane swayed violently as it a ...