When violent protests over the death of George Floyd, a black man pinned down by a white Minneapolis officer, reached Los Angeles, people of color expressed heartbreak but not necessarily surprise — they had seen it nearly 30 years ago during the Rodney King riots.

On April 29, 1992, thousands in the city's largely minority south side took to the streets after an all-white jury acquitted four white police officers of attacking King, a black driver, after a traffic stop. The outcome outraged a community that watched video of King being beaten with police batons, shot with stun guns and stomped on.

By the time order was restored, rioting had spread across much of LA for five days, leaving more than 60 people dead, over 2,300 injured and $1 billion in property damage. Smoke enveloped the city after hundreds of buildings burned to the ground. 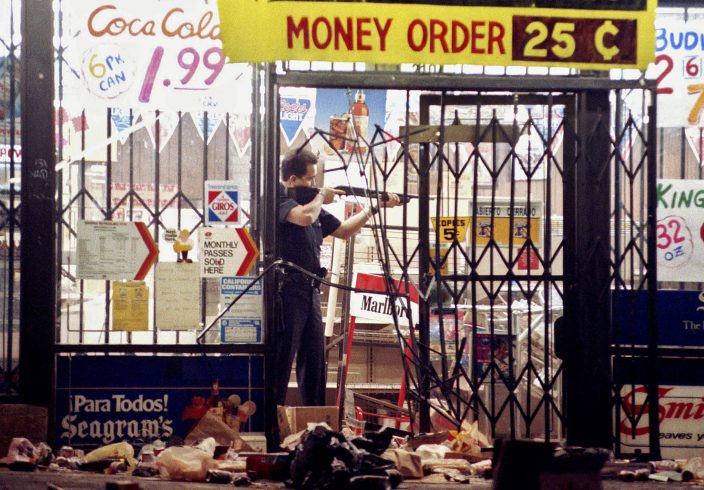 FILE - In this April 30, 1992 file photo, a Los Angeles police officer takes aim at someone attempting to steal something from a market in Los Angeles during the second night of rioting in the city in response to the acquittal of four police officers in the videotaped beating of Rodney King. (AP PhotoJohn Gaps III, File)

The losses are far higher than in protests over Floyd's killing that have swept the nation for days, devolving into people setting buildings and police cars on fire, smashing their way into stores and hurling rocks and bottles at officers. Police have responded with tear gas, rubber bullets and thousands of arrests, many of them in LA.

Kerman Maddox was a young radio reporter who lived just a block from one of the flashpoints in the 1992 riots.

“I had a chance to see a lot and observe a lot, and I was hoping I would never see that again,” said Maddox, who is black. 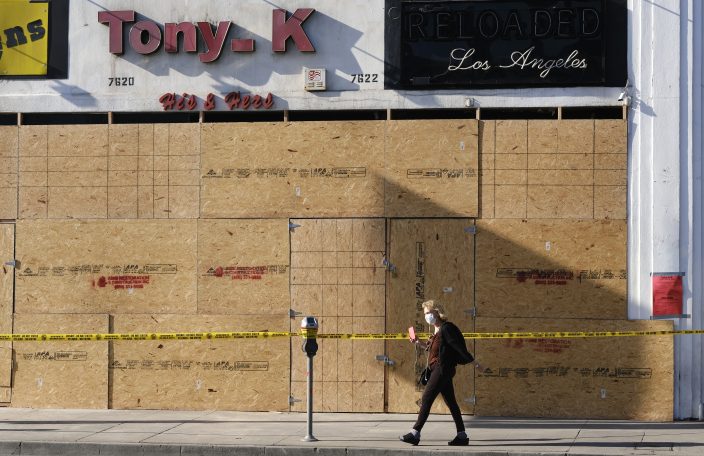 A woman takes photos of a boarded-up store after mass demonstrations looted the area on Saturday night over the death of George Floyd in the Fairfax district of Los Angeles, Monday, June 1, 2020. (AP PhotoRichard Vogel)

But he also thought he'd never see another video recorded by a bystander as violent as the one of King's beating, Maddox said. Not until he watched footage of white Minneapolis police Officer Derek Chauvin pressing a knee into Floyd's neck for several minutes even after he stopped moving and pleading for air.

“I still have a hard time seeing that," said Maddox, who's a public affairs consultant.

He said the chaotic protests it triggered did not entirely surprise him, soon after white men were arrested in May in the February killing of black Georgia jogger Ahmaud Arbery and other incidents. 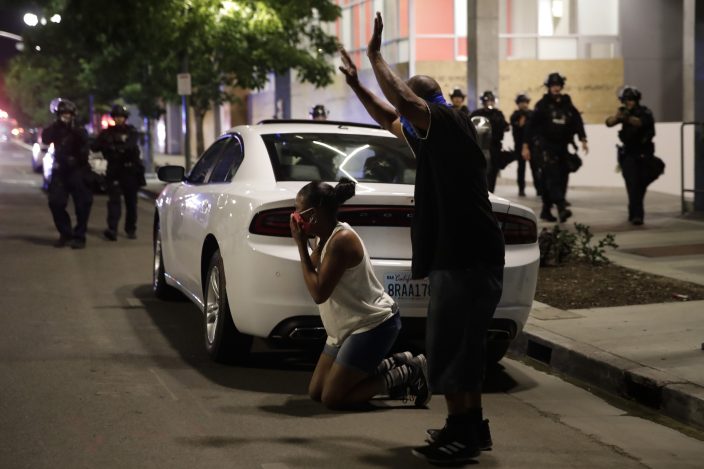 A woman and man duck behind a car as they are surrounded by police officers Sunday, May 31, 2020, in Los Angeles, during protests over the death of George Floyd. (AP PhotoJae C. Hong)

“The problem is this is 2020, Rodney King happened almost 30 years ago and a lot of people see this stuff is still going on," Maddox said. "You're upset, and you're angry, and you're perplexed because you're trying to figure out what do we have to do for this to end.”

To see Los Angeles erupt in chaos for the second time in her life has been devastating, says Aurea Montes-Rodriguez, executive vice president of the Community Coalition South Los Angeles. As a high school student, she had to walk past burning buildings and looters after her school abruptly suspended bus service during the 1992 riots. The experience inspired her to dedicate her career to public service after earning a master's degree from the University of California, Los Angeles.

“I felt that what I was seeing on TV the first night and when I walked through the fires the second day was a civil unrest by people who were fed up believing that the legal system, that the justice system, was going to work for our community,” she said on the 25th anniversary of the King riots in 2017. 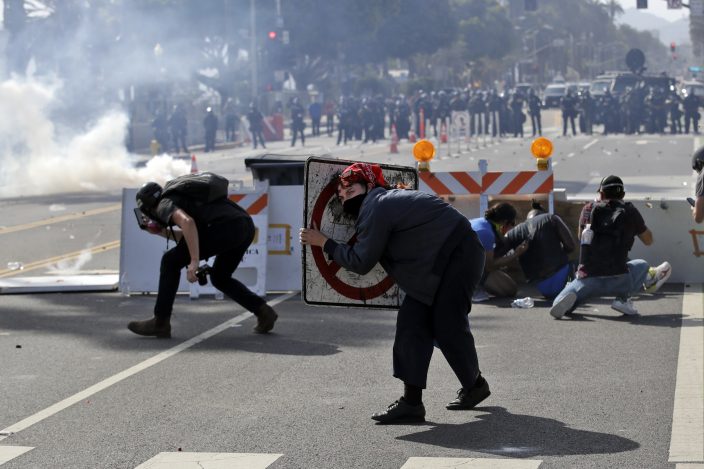 A demonstrator tries to shield herself from tear gas with a street sign during clashes with police Sunday, May 31, 2020, in Santa Monica, Calif. during unrest and protests over the death of George Floyd, a black man who was in police custody in Minneapolis. Floyd died after being restrained by Minneapolis police officers on May 25. (AP PhotoMarcio Jose Sanchez)

That's still the problem, she said Sunday, not only in Los Angeles but in other U.S. cities.

“I’m deeply concerned and heartbroken that this is happening in our city, and worse, that it’s happening in different parts of the country because our elected officials refuse to hear or see the devastation that families are hearing and experiencing,” Montes-Rodriguez said.

Civil rights scholar Jody Armour has noticed that people of color now protesting are often joined by white people, something he didn't see during the 1992 uprising. 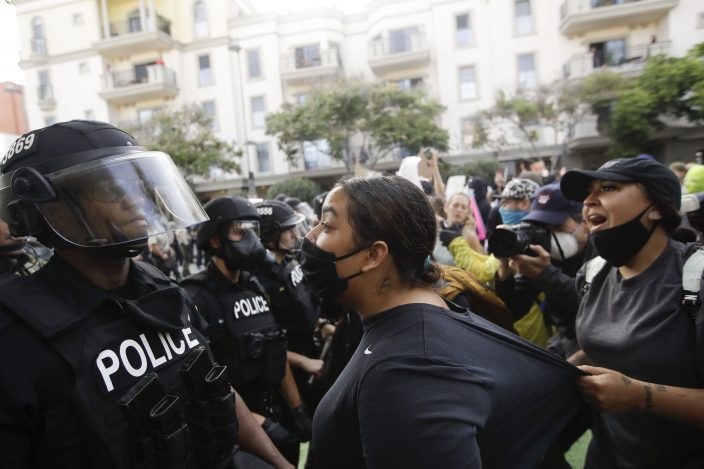 Protesters clash with police Sunday, May 31, 2020, in Santa Monica, Calif. during unrest and protests over the death of George Floyd, a black man who was in police custody in Minneapolis. Floyd died after being restrained by Minneapolis police officers on May 25. (AP PhotoMarcio Jose Sanchez)

That could be an indication, he says, that more white people, realizing black people were not exaggerating when they spoke of the dangers of driving or walking while black, have begun to develop an empathy and to stand with African Americans against oppression.

“Racial discrimination today isn't the old KKK racism, but racism of indifference,” says Armour, a black University of Southern California professor who has written and lectured on racial justice, criminal justice and the rule of law. “You're not motivated by racial animus or spite, you just don't feel the pain of the out-group members as you do for your in-group members."

Still, he cautioned real change has never been easy and is often violent, from the Civil War to the 1960s civil rights movement.

That it has taken this long to get to that point is especially frustrating to Los Angeles County Supervisor Janice Hahn, who was 13 when the Watts riots erupted near her home in 1965 after white officers got into a scuffle with a drunken driving suspect in the city's racially segregated Watts neighborhood. More than 30 people were killed.

While there were substantial efforts to rebuild communities after both uprisings, she said Sunday that it's clear that "despite what we have done, what has still not changed is the systemic racism that we're seeing across the country as it relates to the interaction between law enforcement and unarmed black men.”

She said she's encouraged that several police chiefs have spoken out against Floyd's death. In New Jersey, for instance, Camden County Police Chief Joe Wysocki joined protesters in a march.

“I think that's where it has to start, we have to reform throughout this country our police departments," said Hahn, who is white and whose late father, Kenneth Hahn, was a revered figure in the largely black community he represented on the county Board of Supervisors for 40 years.

“I’m 68 years old," she said ruefully. "My hope is to see in my lifetime a real change. So that I don't go through one of these again.”