Some showed up only hours after taking part in demonstrations over the death of George Floyd, a black man pinned to the ground by a white Minneapolis police officer who pressed a knee into his neck for several minutes. Many said cleaning felt cathartic during a dark period for a nation battling the coronavirus pandemic, the job losses that followed and now the worst racial unrest in half a century.

Bill Stuehler donned a mask Sunday and marched with a fellow nurse and other activists in Los Angeles, later trying to stop young people from breaking into stores and stealing. At home, he kept watching the violence on live feeds and fell deeper into despair. 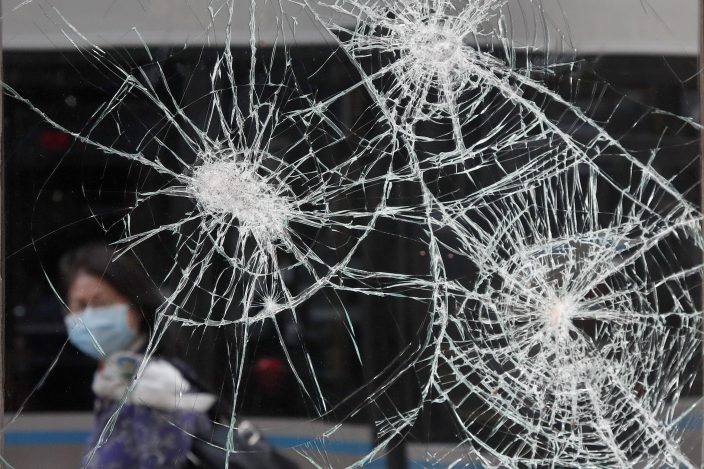 A woman wearing a mask due to coronavirus concerns, looks at a smashed storefront window in Boston's Downtown Crossing, Monday, June1, 2020. A march in Boston Sunday to protest the death of George Floyd, who died after being restrained by Minneapolis police officers on May 25, turned violent after dark. (AP PhotoElise Amendola)

So before sunrise, the 66-year-old grabbed brooms, a rake and a trash shovel and drove to nearby Long Beach to clean up the mess. Soon, more than 2,000 people were working side by side, scrubbing, filling trash containers and repairing what they could in the hard-hit city south of Los Angeles.

“It was pretty amazing to see the number of people turn out for the community,” Stuehler said. “It restored the faith in humanity that I had lost last night.”

Throngs of people nationwide volunteered to help businesses — from small shops to major chains — bounce back from the damage, though some stores had burned to the ground and another night of unrest was expected. 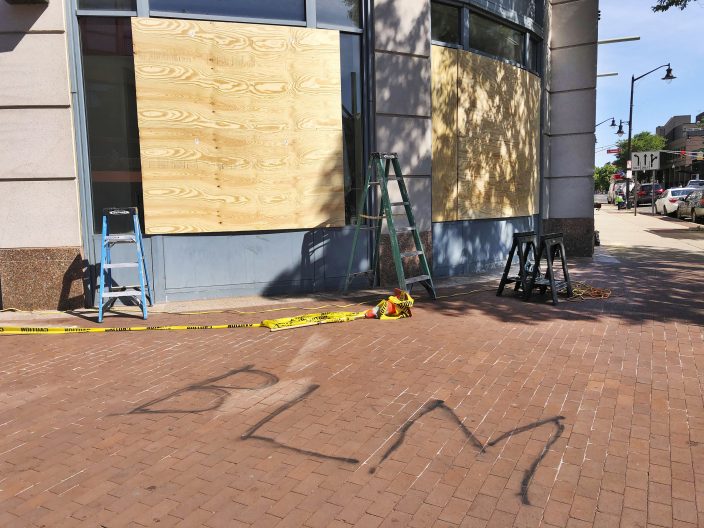 Workers boarded up the windows on a building in downtown Trenton, NJ, that houses businesses as well as state government offices, Monday June 1, 2020. Calling to mind the Black Lives Matter movement, someone spray painted BLM on the sidewalk Sunday night in reaction to George Floyd's death while in police custody on May 25 in Minneapolis. (AP PhotoMike Catalini)

In New Jersey, Chris DeLeon, broom in hand, arrived at 8 a.m. with dozens of other people to sweep up broken glass in the capital of Trenton. The 34-year-old had protested Sunday, then decided to help clean up after seeing videos of people smashing windows.

“It just goes to show there’s at least as many good people as there are other folks out there,” DeLeon said.

In Wisconsin, volunteers in Milwaukee and Madison turned up for a second day to clean up damage from the night before. 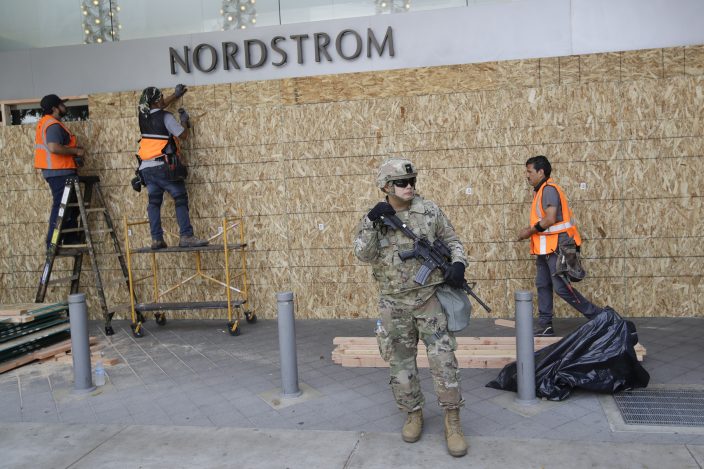 A member of the National Guard stands in front of a Nordstrom store as it is boarded up Monday, June 1, 2020, in Santa Monica, Calif., a day after unrest and protests over the death of George Floyd, a black man who died in police custody in Minneapolis on May 25. (AP PhotoMarcio Jose Sanchez)

Countless businesses already had taken a hit from restrictions designed to curb the spread of the coronavirus and were starting to reopen just as the protests led to more expensive setbacks: vandalism and stolen merchandise.

The owner of the Laugh Factory’s club in Long Beach discovered broken windows and doors, computers smashed and memorabilia stolen, including Three Stooges posters and autographed photos of Redd Foxx and other late comedians. Workers boarded up windows and swept up broken glass Monday.

Owner Jamie Masada was offering an unspecified reward to anyone who returns the memorabilia. 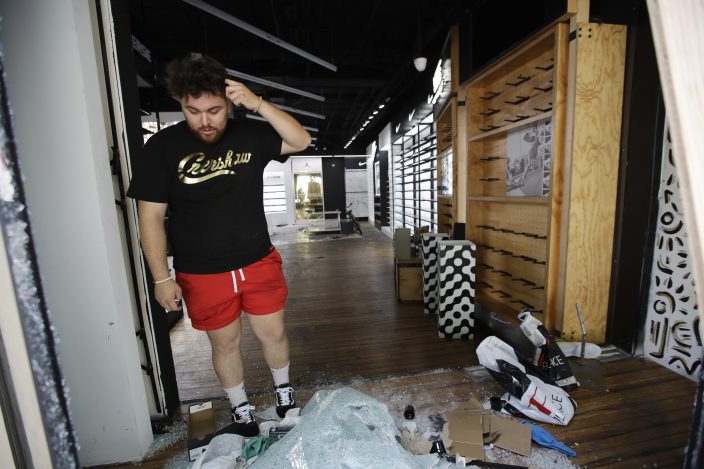 Nike store employee Enrique Barajas stands on a window display of the looted store Monday, June 1, 2020, in Santa Monica, Calif., a day after unrest and protests over the death of George Floyd, a black man who was in police custody in Minneapolis. Floyd died after being restrained by Minneapolis police officers on May 25. (AP PhotoMarcio Jose Sanchez)

“It is not worth anything to them but it means a lot to me,” Masada said, because it's tied to those who represent “the height of comedy.’”

In Sacramento, two-thirds of the capital city's 600 downtown properties took a hit, with more than 200 broken windows, 330 pieces of graffiti, and more than 50 cases of “significant property damage," said Michael Ault, executive director of the Downtown Sacramento Partnership.

Seattle Mayor Jenny Durkan said she didn't recognize downtown when she walked through it Sunday, “but what I did recognize were the hundreds of volunteers and residents who came because they love Seattle.” 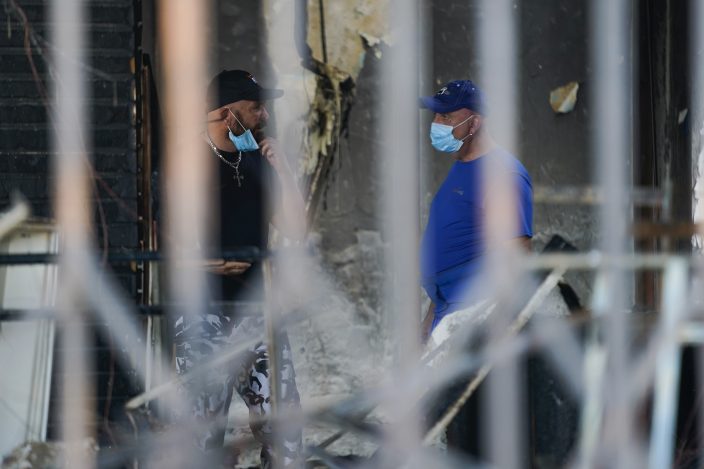 Vasken Samuelian, owner of Men's Suit Outlet, and Janik Kayajian, the manager, survey damages inside the burned store building, Monday, June 1, 2020, in Long Beach after overnight protests over the death of George Floyd died in police custody on May 25 in Minneapolis. (AP PhotoAshley Landis)

Stuehler found the same community spirit in Long Beach. A nurse who had been treating COVID-19 patients, Stuehler took the month off when he joined the protest. He said a small percentage of people vandalized businesses but “the horror of the opportunism, the rage, the disregard for logic and reason — it was shocking.”

They had an outsize impact that detracts from the message of overhauling police agencies, Stuehler said. But he said he's feeling revived after seeing so many people work together.

Alycia Barber also was moved to help after watching from her Long Beach apartment as people smashed windows and police doused the crowds with pepper spray Sunday.

The 22-year-old got up early and joined others organizing clothing and jewelry strewn inside a Forever 21 store, hours after thieves made off with armloads of clothes. Few of the volunteers knew each other; they just showed up, she said.

There were parents with children, senior citizens, college students. One woman brought paint and brooms so people could paint over graffiti on the outside wall of a parking garage.

“I just feel so helpful today," Barber said, adding that she supports the fight against racial injustice. “But now we also want to get up and make the world a beautiful place for people."