In a statement to the House of Commons, Dominic Raab said “we strongly oppose such an authoritarian law being imposed by China in breach of international law.”

Hong Kong is a former British colony that returned to Chinese rule in 1997, under a “One Country, Two Systems” agreement that guarantees the city a high degree of autonomy. 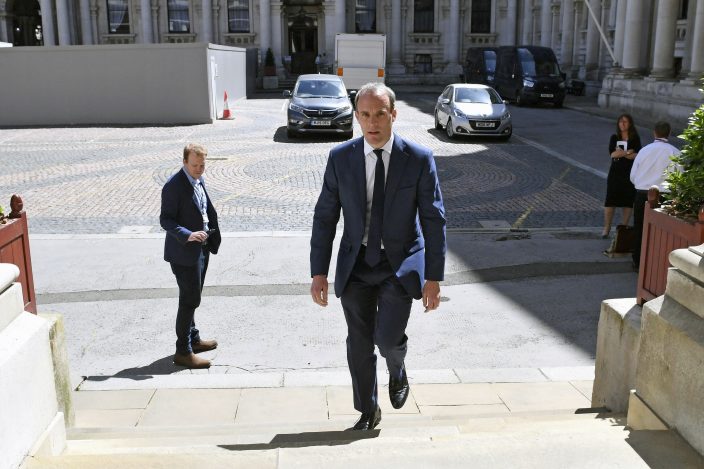 Britain's Foreign Secretary Dominic Raab arrives at the Foreign and Commonwealth Office in London, Thursday May 28, 2020. Raab has signed a joint statement urging China to work with the government of Hong Kong to find a "mutually acceptable accommodation that will honour China's international obligations" under the Joint Declaration. (Stefan RousseauPA via AP)

China’s largely ceremonial parliament voted last week to bypass Hong Kong’s legislature and develop and enact national security legislation on its own for the semi-autonomous territory. Critics, including governments in Britain, the U.S. and Canada, are worried that the laws would erode liberties such as free speech and opposition political activities.

“It would up-end China’s ‘One Country, Two Systems’ paradigm,” Raab said. “And it would be a clear violation of China’s international obligations, including those made specifically to the United Kingdom under the Joint Declaration.”

“We are not seeking to intervene in China’s internal affairs,” he added. “Only to hold China to its international commitments, just as China expects of the United Kingdom.”

Raab also pledged to “stand by” Hong Kong and uphold Britain’s historic responsibilities to the territory.

“Even at this stage I sincerely hope China will reconsider its approach,” he said. “But if not, the U.K. will not just look the other way when it comes to the people of Hong Kong.”

Britain’s government announced last week that if China follows through with the proposed security law, British officials would open pathways to British citizenship for those Hong Kong residents who hold British National (Overseas) passports. The current six-month visa limit would be extended to 12 months for those passport holders, Raab said.

Beijing’s resolve to push through the laws against secession, subversion, terrorism and foreign interference in Hong Kong appears to have been hardened by the months of often-violent anti-government protests in the city last year, and a determination to prevent them from reigniting this summer.