The outbreak of the coronavirus has dealt a shock to the global economy with unprecedented speed. Following are developments Tuesday related to the national and global response, the work place and the spread of the virus. 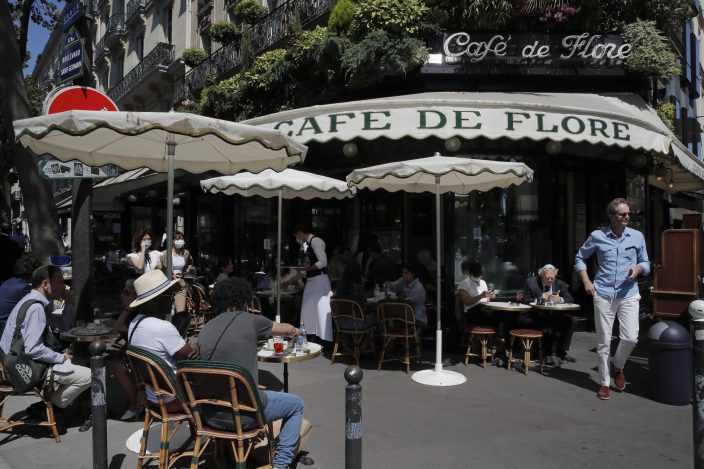 People sit on the Cafe de Flore terrace in Paris, Tuesday, June 2, 2020. Parisians who have been cooped up for months with take-out food and coffee will be able to savor their steaks tartare in the fresh air and cobbled streets of the City of Light once more, albeit in smaller numbers. (AP PhotoChristophe Ena)

Visa said in a regulatory filing that the recovery in international markets in which it process the majority of transactions lagged the U.S. in May. Global processed transactions declined 12% last month, a 12 percentage point improvement over April.

— Interest rates on U.S. new vehicle loans dropped to 4% on average last month, the lowest since 2013 as automakers offered 0% financing to juice sales amid coronavirus stay-home orders. The Edmunds.com auto pricing site says the rate was the third-lowest since 2002. 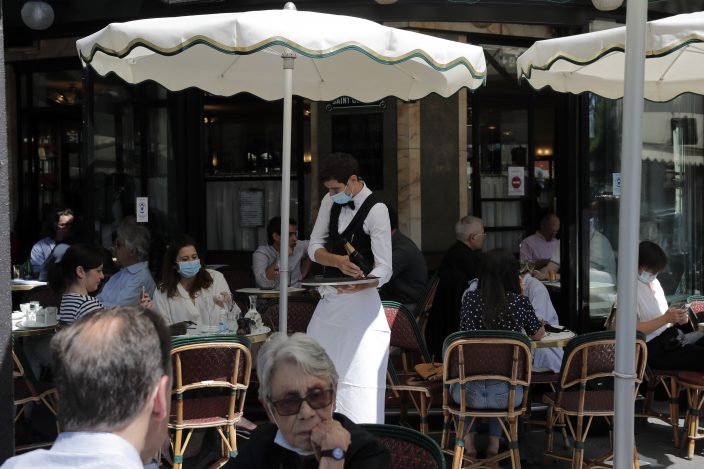 People sit on the Cafe de Flore terrace in Paris, Tuesday, June 2, 2020. Parisians who have been cooped up for months with take-out food and coffee will be able to savor their steaks tartare in the fresh air and cobbled streets of the City of Light once more, albeit in smaller numbers. (AP PhotoChristophe Ena)

Loan lengths were near record highs in May with an average of 71.4 months, Edmunds reported. Analyst Jessica Caldwell cautions that the deals may be waning as dealer inventory starts to get depleted during the next few months. 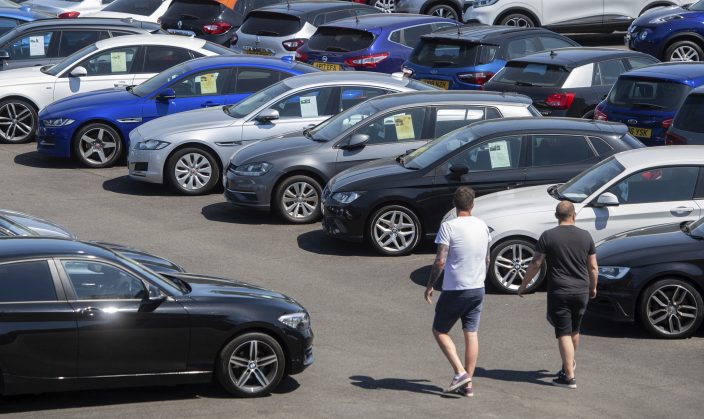 People view cars on the forecourt of a car sales outlet, in Norfolk, England, open for the first time since the lockdown, as part of a wider easing of restrictions in England, Monday June 1, 2020. The British government has lifted some lockdown restrictions to restart social life and activate the economy while still endeavouring to limit the spread of the highly contagious COVID-19 coronavirus. (Joe Giddens PA via AP)

— Sales at Lands' End fell 17.3% in the first quarter due to weakening demand caused by the virus outbreak. The retailer has taken several steps to cut costs and improve its financial flexibility, including implementing furloughs and temporarily reducing salaries for executives and corporate staff. Lands' End said it is cutting about 10% of its corporate staff in the second quarter.

For the second quarter, the company anticipates revenue declining in the mid to high single digits compared with a year ago.

— Dick's Sporting Goods swung to a loss in the first quarter and sales declined, but the sporting goods retailer is seeing sales improve as stores reopen. While consolidated same-store sales fell 29.5% in the first quarter, they are only down 4% through the first four weeks of the second quarter.

— Build-A-Bear moved to a loss in its fiscal first quarter, according to preliminary results, with sales falling 45%.

The company is starting to reopen some stores, but says it expects to continue with tight inventory management, preserving cash and a reduced staff as it works its way through the virus outbreak. It anticipates having approximately 35 stores open by the end of this week, with more opening over the coming weeks.

The plush toy company did experience a surge in online orders, particularly for its stuffed animal based on “the Child” from the Disney+ series, “The Mandalorian." Build-A-Bear said Tuesday that it had its highest single day demand in its online history with the initial offering of the product.

— Sally Beauty Holdings is seeing a strong uptick in sales at reopened stores. The company estimates May's enterprise-wide sales at $262 million, compared with $95 million in April.

Sally Beauty had 37% of its stores open in the U.S. and Canada in early May, but has 84% open as of Tuesday. All furloughed workers in the field and at headquarters in the U.S. and Canada have been recalled by the company, effective on Monday, except for associates working in the limited number of stores that remain closed. Additional associates in Europe and Latin America will return in the company’s fourth quarter.

France’s government says its recession will be even deeper this year than earlier thought. Finance Minister Bruno Le Maire said on RTL radio Tuesday that the government now forecasts the French economy – one of the world’s largest – will shrink by 11% this year instead of earlier estimates of 8%. That will be France’s worst economic performance since World War II.

That's less than preliminary figures the office released last month, when it estimated the economy fell 3.6% compared with the previous quarter and by 2.2% year-over-year. Still, it's the biggest decline since 2010 and the economy is expected to contract even more in the second quarter.