The United Nations on Tuesday called on countries to raise at least $2.4 billion for Yemen, where more than five years of war have pushed the country's health care system to a state of collapse with little capacity to test or treat those infected by the coronavirus.

Saudi Arabia, which co-hosted the U.N. pledging event, has vowed to pay half a billion dollars in aid for Yemen this year, $300 million of which will be funnelled to the U.N. and related aid agencies.

The kingdom, which has been at war in Yemen since 2015 against Iranian-allied Yemeni Houthis, hopes to use the event to showcase its role as one of the largest donors of aid to the war-torn country. The conflict has killed thousands and created the world's worst humanitarian disaster. 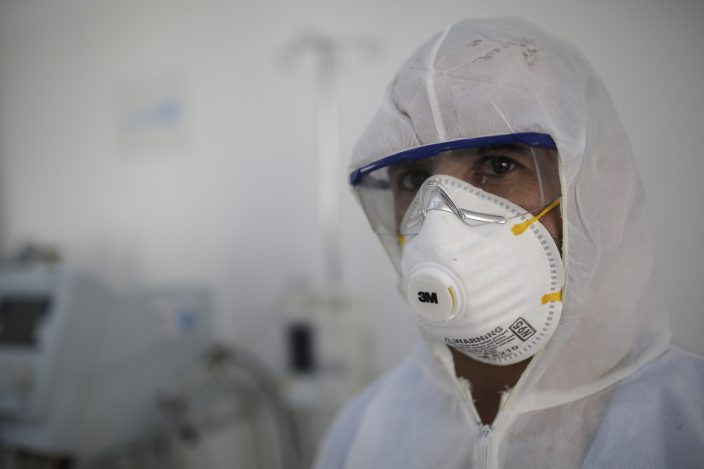 FILE - In this March 15, 2020 file photo, a medic sets up an isolation room in a coronavirus quarantine ward at a hospital in Sanaa, Yemen. Aid organizations are making an urgent plea for donations to shore up their operations in war-torn Yemen, saying they’ve already been forced to stop some of their work even as the coronavirus rips through the country. The calls for funds come ahead of a UN donor conference, hosted virtually by Saudi Arabia, scheduled to take place Tuesday, June 2, 2020. (AP PhotoHani Mohammed, File)

In his remarks at the virtual pledging event, U.N. Secretary-General Antonio Guterres stressed that ending the war is the only way to address the humanitarian crisis in Yemen.

The situation in Yemen is “catastrophic,” added Mark Lowcock, the U.N. under-secretary-general for humanitarian affairs and emergency relief coordinator.

“That is what more than five years of war has done to Yemen. The health system is in a state of collapse," he said. “Things are worse today than at any time in recent history." 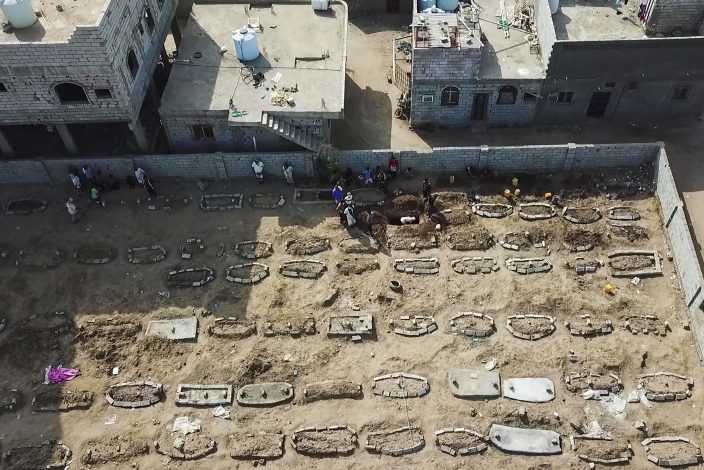 In this May 21, 2020, photo, grave diggers bury bodies at Radwan Cemetery in Aden, Yemen. At the cemetery in Yemen’s largest southern city, dozens of fresh graves are a testament to a spike in deaths amid the coronavirus pandemic. The cemetery workers who bury them don’t know what killed the newly deceased. But there’s no denying that there's been an increasing number of people getting sick in the port city of Aden — likely from the coronavirus. (AP Photo)

Meanwhile, Guterres said death rates from the COVID-19 virus in the southern city of Aden alone are among the highest in the world.

“There are shortages of testing devices, oxygen, ambulances and basic protective equipment,” he said. “Even hospitals that are operational and equipped may not have a reliable electricity supply.”

Compounding myriad problems Yemenis face is access to clean, running water needed for sanitization in the fight against the coronavirus, as well as cholera, which more than 2.3 million people have contracted since 2017. 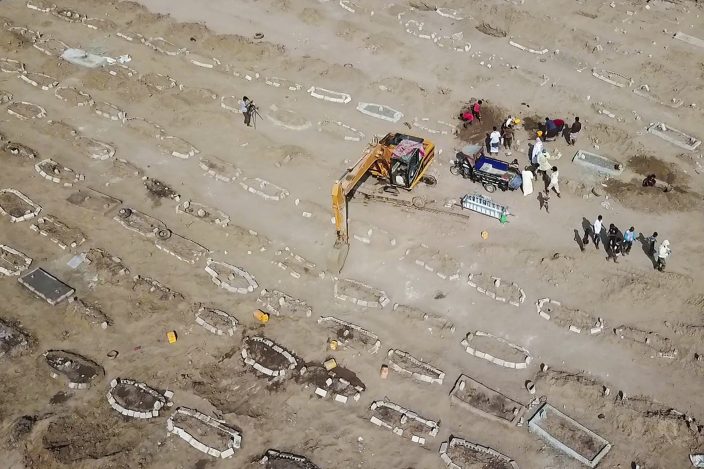 In this May 21, 2020, photo, grave diggers bury a body at Radwan Cemetery in Aden, Yemen. At the cemetery in Yemen’s largest southern city, dozens of fresh graves are a testament to a spike in deaths amid the coronavirus pandemic. The cemetery workers who bury them don’t know what killed the newly deceased. But there’s no denying that there's been an increasing number of people getting sick in the port city of Aden — likely from the coronavirus. (AP Photo)

Additionally, two-thirds of the country's roughly 30 million people rely on food assistance, while more than 310,000 children suffer severe acute malnutrition due to starvation.

The dwindling funds are the result of several factors, but among the top reasons is obstruction by Yemen’s Houthi rebels, who control the capital, Sanaa, and other territories. The United States decreased its aid to Yemen earlier this year, citing interference by the Houthis.

Also, more than a dozen U.N. aid workers deployed to deal with Yemen's humanitarian crisis have been accused of joining with combatants on all sides to enrich themselves from the billions of dollars in donated aid flowing into the country.

Aid groups say at least $2.4 billion is needed to cover essential needs in Yemen for the coming six months, including programs to counter COVID-19. The U.N. warned that if funding is not secured, more than 30 U.N. programs in Yemen will close in the coming weeks.

Already, some 75% of U.N. programs in Yemen have had to shut their doors or reduce operations. The global body’s World Food Program had to cut rations in half and U.N.-funded health services were reduced in 189 out of 369 hospitals nationwide.

Lowcock said the biggest challenge now facing Yemen is money: The country is in dire need of it and most of the pledges made by countries have not been paid.

While Saudi Arabia was the top donor country to Yemen in 2019, this year the kingdom has paid just $16 million of the $500 million pledged, according to tracking figures by the U.N.

Critics question Saudi Arabia's high-profile role in rallying humanitarian support even as it engages in continued warfare against the Houthis.

Yemen researcher at Human Rights Watch, Afrah Nasser, accused Saudi Arabia of “trying to whitewash its coalition’s role in the deepening humanitarian catastrophe in Yemen." She called on all parties to the war to immediately cease the conflict and put an end to the crisis.