U.S. air travel down almost 90% from a year ago. A ghostly emptiness at Hawaii's tourist hotels. Deserted Las Vegas casinos counting the days to reopening.

Few sectors of the economy have endured as much devastation from the coronavirus as the travel business. Surveying the wreckage, economists and company leaders say it will take years to regenerate the $1.1 trillion the industry produced last year, potentially leaving many airlines, hotels, rental car companies and restaurants in peril.

And as long as travel remains depressed, the economy could struggle to accelerate. About 10% of all jobs flow from the travel sector. Industry-wide unemployment now tops 50%, government reports suggest, a level that could presage bankruptcies and business closures. Spending by business and leisure travelers had provided an engine of growth that helped power the economy until the virus struck. 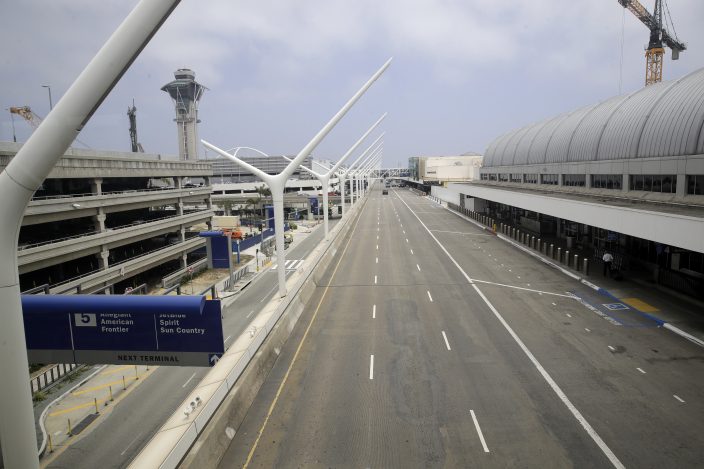 A empty street is seen at the Los Angeles International Airport Thursday, May 28, 2020, in Los Angeles. From Britain's EasyJet to American and Delta in the U.S., airlines are cutting even more jobs to cope with a crushing drop in air travel caused by the coronavirus. (AP PhotoMarcio Jose Sanchez)

“While the rest of the country is moving into a recession," said Tori Emerson Barnes, an executive at the U.S. Travel Association, “the travel industry is already in a depression.”

The industry’s collapse is unrivaled in recent memory. The closest parallel, the 9/11 terrorist attacks, closed airports for four days. The industry needed roughly two years to match its previous passenger levels. The cost this time is estimated at nine times the damage from 9/11, Barnes said.

The industry was once a reliable gauge of economic health. From business people on high-priced overseas trips to tourists flying to Disney World, the industry benefited from steady spending.

Not this time. Travel might be one of the last sectors to recover.

“Usually travel would be a good leading indicator of confidence and discretionary spending,” said Gregory Daco, chief U.S. economist for Oxford Economics. “But in the wake of the global coronavirus recession, it’s likely to be a lagging indicator.”

With revenue all but dried up, U.S. airlines are burning through cash and planning for layoffs this fall, when a no-layoffs provision in federal aid to the carriers will expire. That aid includes nearly $25 billion in payroll assistance and an additional $25 billion in loans.

Even before then, American and United Airlines have said they will slash management and support staff by 30% — about 8,500 jobs between them. Delta has launched an early-retirement offer and warns of layoffs if there aren’t enough takers. Those moves don’t include the tens of thousands of union pilots and flights attendants who are likely to be furloughed in October,

The U.S. Travel Association is urging the government to provide more help through individual tax credits worth up to $4,000 for domestic travelers. The industry also wants to make business meals and entertainment fully tax-deductible for companies.

Stock market investors are embracing a future with less travel. Shares in Zoom, the now-ubiquitous video conference company, have more than doubled since mid-February. Delta, United and American, the nation’s three largest airlines, are worth — combined — $27 billion less than Zoom.

Across the hotel industry, mid-priced companies are managing better than luxury ones. Hotels near beaches and in smaller cities are faring better than urban locations. Lodging that draws nearby tourists is doing far better than those that rely on airports.

The Wyndham Grand in Clearwater, Florida, was full Friday, Saturday and Sunday nights over the Memorial Day weekend. Most guests had come from within a three-hour drive.

Danny Aderholt runs a company that owns eight hotels along highways in Ohio and West Virginia and one in downtown Pittsburgh that remains closed. Guest cancellations, he said, started in March. Then new bookings stopped. Each of his hotels is operating at an average monthly loss of about $35,000. The hotels that previously employed 20 now have about eight.

“We let go of quite a few people," Aderholt said.

Nowhere is the devastation as severe as in Nevada. The state leads the nation with a crushingly high 28% unemployment rate — above the worst U.S. jobless rate recorded in the depths of the Great Depression. Once-jammed sidewalks of the Las Vegas Strip are sparse.

The gambling and entertainment mecca has suffered a 97% drop in visitors in April from a year ago, the most recently available data show. Normally packed hotels had less than 2% occupancy, according to the Las Vegas Convention and Visitors Authority. Casinos gaming revenue almost entirely disappeared in April. On Thursday, casinos are scheduled to reopen.

Hawaii has similarly suffered, with 22% unemployment. Other states, especially those with major airline hubs like California, New York, Texas, Illinois and Georgia, have also endured deep layoffs in the tourism sector. Airport officials in Orlando estimate that travel to the home of Disney World and Universal Studios won't return to previous levels until sometime between 2022 and 2025.

The number of passengers screened at airport checkpoints remains down nearly 90% from a year ago. The average domestic flight is carrying fewer than 50 passengers.

Airlines are hoping for a slow pickup by late summer. But they're wary of making predictions, not when people like David Ward worry about getting on a plane. A retired investor from Ohio, Ward was stranded in Morocco when it shut down travel in March. He's still fighting to get refunds for cancelled flights. But to him, flying now feels risky.

"You never know who is coughing and sneezing on you in a plane,” Ward said.

Mark Miller, an executive in Boston, is accustomed to flying about 100,000 miles a year. He hasn’t ruled out a couple of trips late this summer and around the holidays. But he has no other immediate flight plans. He's instead planning driving trips around New England.

Even travel industry types have qualms. Terry McClintock, a Texas consultant who advises airlines, is taking his first COVID-era flight next week to meet with colleagues in Las Vegas, confident that the plane and airport will be cleaner than ever. He is drawing a line, though, at international travel. He isn't eager to wear a mask for a long flight or face a possible quarantine overseas.

“I’m bullish on getting back in gear, but not crazy,” he said.

Neither are many other travelers, which is why U.S. airlines are burning through cash. Airline executives say that after the most immediate threat from the pandemic subsides, the carriers will likely shrink, with fewer jobs and fewer destinations. Already, cities like Erie, Pennsylvania, and Peoria, Illinois, are losing some of their service, a trend that could accelerate after federal regulation of airline routes expires this fall.

In the end, the industry won't fully recover until nearly everybody feels safe about flying.

“Honestly, we don’t think that will happen until there is a vaccine,” said United Airlines CEO Scott Kirby.