South Korea on Wednesday reported 49 new cases of COVID-19, continuing a weekslong resurgence of the virus as the government defended its decision to reopen schools despite health risks.

The figures announced by the Korea Centers for Disease Control and Prevention on brought national totals to 11,590 cases and 273 deaths. All but one of the new cases were reported from the densely populated Seoul metropolitan area, where hundreds of infections have been linked to entertainment venues, church gatherings and a massive e-commerce warehouse.

Mayors and governors in the greater capital area have shut thousands of nightclubs, hostess bars, karaoke rooms, churches and wedding halls to slow the spread of the virus. 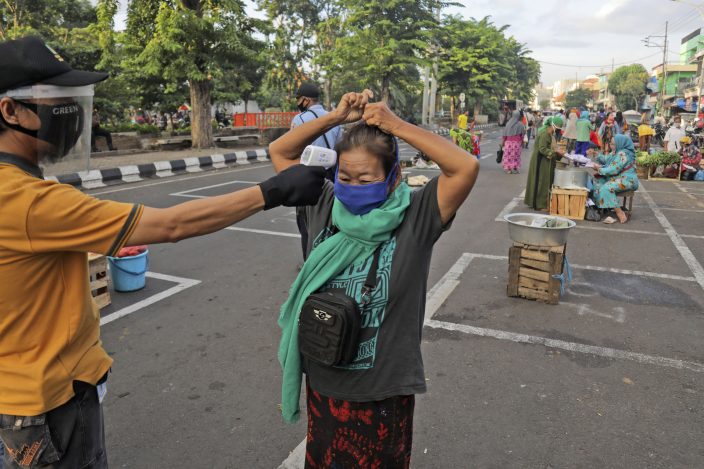 A city official takes the temperature reading of a vendor as others sit on a marked positions to maintain physical distancing in an attempt to curb the spread of the new coronavirus outbreak at a traditional market in Surabaya, East Java, Indonesia, Wednesday, June 3, 2020. (AP PhotoTrisnadi)

Some entertainment venues in Seoul, Incheon and Daejeon began collecting the personal details of their customers through smartphone QR codes this week so they could be located easily when needed, a requirement that will be expanded nationwide on June 10.

Despite the spike in transmissions, the government has been pushing ahead with a phased reopening of schools, which began with high-school seniors on May 20. 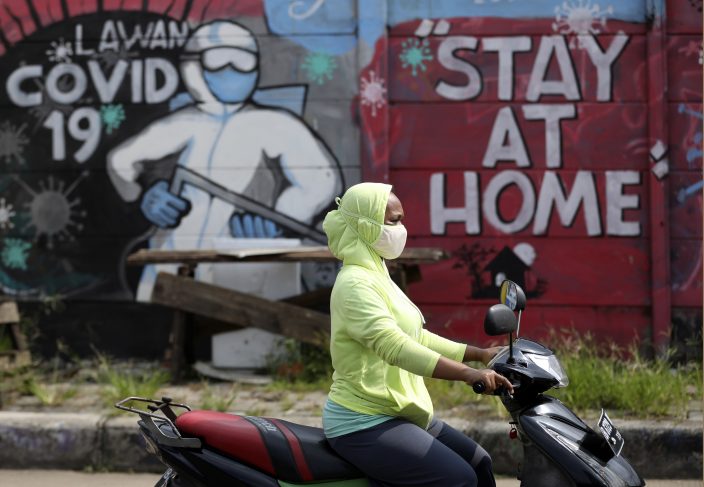 A Muslim woman in a protective mask rides her motorbike past a mural depicting a COVID-19 theme during the new coronavirus outbreak on the outskirts of Jakarta, Indonesia, Tuesday, June 2, 2020. Writings on the mural read "Fight COVID-19, stay home." (AP PhotoDita Alangkara)

The Education Ministry couldn’t immediately confirm how many schools had to delay their openings because of virus concerns. But it said that 519 schools so far have been forced to go back to remote learning.

Keeping schools closed would have been a difficult political decision in a country where teenagers are thrown into hyper-competitive school environments because graduating from elite universities is seen as crucial to career prospects. But some critics say that would have been the right decision for public health interests and that officials are risking the safety of children and their families.

Prime Minister Chung Sye-kyun said that the country kept schools open even during the 1950-53 Korean War.

“I believe that we cannot fail the dreams and future of our children because of the current difficulties,” Chung said during a virus meeting.

— CHINA REPORTS FOUR CASES: China on Wednesday reported four new confirmed coronavirus cases, one from abroad and three added retroactively after nucleic acid tests returned positive results. However, the country’s overall count fell by one to 83,021 after five other cases were eliminated retroactively. No new deaths were reported, leaving the total at 4,634 since the virus was first detected in the central Chinese city of Wuhan late last year. Just 73 remain in treatment and another 360 people are in isolation and being monitored for either testing positive but showing no symptoms or for being suspected of having caught the virus.

The Latest: After lockdown, cases up in Australian stat ...

China braces for more storms; 121 dead or missing this ...

Formula One drivers all wore a bla ...