Islamic extremists chased Adama Drabo and his family from their land in western Burkina Faso, forcing them to abandon a year's worth of crops.

Now that food is rotting in storage in the village, too dangerous for him to retrieve, even as the family is forced to survive on meager government rations. Drabo already has lost his 20-year-old son, who was killed by a roadside bomb.

“Security is getting worse, and this year we won’t be able to cultivate and it will be a big problem,” he said. His future looks bleak if he and his family cannot return to their land.

In this Wednesday, May 13, 2020, photo, a girl pushes a cart of food at a market in Tougan, Burkina Faso. Violence linked to Islamic extremists has spread to Burkina Faso's breadbasket region, pushing thousands of people toward hunger and threatening to cut off food aid for millions more. (AP PhotoSam Mednick)

Violence linked to jihadists has spread from Burkina Faso’s north to its western breadbasket in the Boucle du Mouhoun region, pushing thousands like Drabo to hunger and threatening to cut off food for millions more in the country on the edge of the Sahara Desert. The fertile land produces large amounts of rice and maize, according to the government.

Humanitarian groups are concerned that the coronavirus pandemic could exacerbate an already dire situation in Burkina Faso, one of the most impoverished countries in the world.

“If production goes down in this area and if movement restrictions due to the coronavirus drive up food prices in the markets, it could push numbers of severely vulnerable people to double or triple,” said Julia Wanjiru, communications coordinator for the Sahel and West Africa Club, an intergovernmental economic group.

In this May 13, 2020, photo, a boy pushes his bicycle past food stalls at a market in Tougan, Burkina Faso. Violence linked to Islamic extremists has spread to Burkina Faso's breadbasket region, pushing thousands of people toward hunger and threatening to cut off food aid for millions more. (AP PhotoSam Mednick)

Food insecurity already affects 2 million people in Burkina Faso, according to the latest report from its government and aid groups. Coronavirus is also spreading, with 884 reported cases and 53 deaths as of Monday.

While the government has lifted restrictions on movement between cities, its borders with Mali, Niger and Ivory Coast remain closed, making the importation of food more expensive.

The small town of Tougan is sheltering nearly 6,000 displaced people with new arrivals daily, according to Lassina Sougue, who directs the government's humanitarian response in Sourou province. The situation is similar in some other small towns. 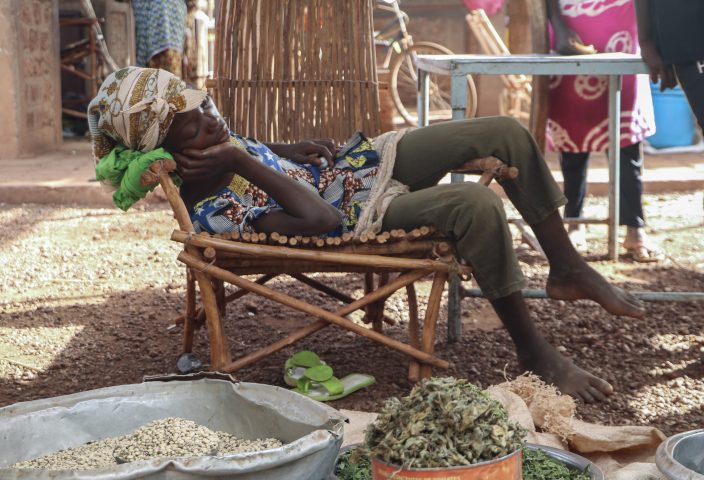 In this Wednesday, May 13, 2020, photo, a child sleeps at a market stall selling food in Tougan, Burkina Faso. Violence linked to Islamic extremists has spread to Burkina Faso's breadbasket region, pushing thousands of people toward hunger and threatening to cut off food aid for millions more. (AP PhotoSam Mednick)

He said the communities are resilient and showing solidarity. But on a recent trip to Boucle Du Mouhoun, at least a dozen people coming from three different provinces all said they were worried about food and access to their land.

Anticipating a food crisis, the United States has doubled this year’s funding to World Food Program for Burkina Faso, to $21 million and is set to announce an additional $7 million in the coming weeks, according to an official with close knowledge of the situation. The official was not authorized to talk to reporters and spoke on condition of anonymity.

Boucle du Mouhoun has seen five roadside bomb attacks this year, compared with two in all of 2019, according to the Armed Conflict Location and Event Data Project, which collects and analyzes such information.

There also are fears that the attacks are becoming more sophisticated because of training by foreign jihadists. A high-ranking foreign security official said extremists from Syria and Libya came to Burkina Faso in January and showed local jihadists how to make remote-controlled bombs. The security official was not authorized to speak to journalists and thus spoke on condition of anonymity.

Some security analysts think the increase in violence is an extremist strategy to cut off the country’s food supply and deepen grievances against the government.

“It’s logical and disturbing that armed groups target the region responsible for the largest cereal production in the country," said Christian Poonwah, director of Safer Access Consulting, an international security company in the capital, Ouagadougou.

“If prices for grains rise because production was compromised, it could have severe repercussions for public perception of the government and play directly in their (the extremists') favor.”

Reports of jihadists burning granaries and looting food warehouses at schools in the region are rising, he said.

Other experts think violence is escalating because jihadists are being squeezed out of the border areas between Mali and Burkina Faso by international and regional military operations.

They appear to be using Boucle du Mouhoun as a bridge to expand operations southwest toward coastal countries like Ivory Coast, where attacks also have increased this year, said Flore Berger, a Sahel research analyst at the International Institute for Strategic Studies.

The crisis in Burkina Faso already has displaced about 850,000 people, leaving many sustenance farmers unable to feed their families.

Seni Lzouma, 41, fled the north after his village was attacked by gunmen. For nearly a year, he's been asking local authorities to help him find land in Kossi province, where he lives with wife and three children.

“The community leaders said all the farms and all of the land in town was occupied,” he said, pointing to a patch of land beside the small house that the family is renting.

He's been trying without success to grow food from the sandy soil.