One of Sweden's top health officials is defending his country's response to the coronavirus outbreak after first showing some contrition about its actions.

“We still believe that our strategy is good, but there is always room for improvement. ... You can always get better at this job,” chief epidemiologist Anders Tegnell said.

Australia is in its first recession in 29 years and officials there believe the economic woe will likely get worse before things improve. Stalls reopen at Walthamstow Market in east London, the longest street market in Europe, following the introduction of measures to bring England out of lockdown, Wednesday June 3, 2020. The highly contagious COVID-19 coronavirus has impacted on Britain with self isolation and social distancing when people move from their homes. (Victoria Jones PA via AP)

In Britain, airlines and tourist companies say the country's planned 14-day quarantine for visitors will blunt tourism recovery as nations open up from lockdowns.

Here are some of AP’s top stories Wednesday on the world’s coronavirus pandemic. Follow APNews.com/VirusOutbreak for updates through the day and APNews.com/UnderstandingtheOutbreak for stories explaining some of its complexities.

Gangways are stored beside passenger jets at the airport in Duesseldorf, Germany, Wednesday, June 3, 2020. Germany is going to lift the travel ban in Europe on 15 June. (AP PhotoMartin Meissner)

— Contact tracers in New York City hired to contain the spread of coronavirus reached more than half the 600 or so people who tested positive for the virus there. Dr. Ted Long, head of the city's program, said tracers getting through to that many “shows that the system we're setting up is working.”

— Sweden’s chief epidemiologist showed contrition as criticism mounted over the Scandinavian country’s method of fighting the coronavirus, which has resulted in one of the highest death rates per capita in the world. Sweden did not shut down the country or economy, relying on citizens' sense of duty. Tegnell later defended what the country did, saying there's always room for improvement.

— A Chinese company paid by California to manufacture hundreds of millions of protective masks missed a Sunday deadline for federal certification, marking the second time its shipments to the state will be delayed. State officials are deciding whether to give manufacturer BYD more time or seek a refund for about a quarter-billion dollars it already paid up front. 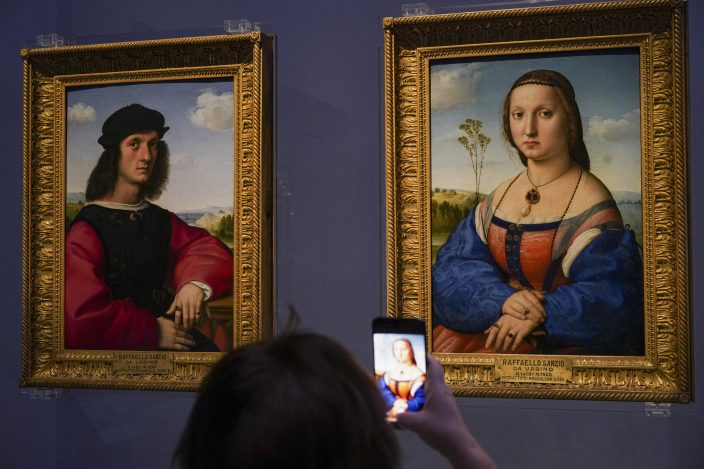 A member of the media takes pictures of 15th century paintings "Portraits of Angelo, left, and Maddalena Doni" by Raffaello Sanzio da Urbino, during a press tour of the Uffizi museum on the day off its reopening, in Florence, Wednesday, June 3, 2020. The Uffizi museum reopened to the public after over two months of closure due to coronavirus restrictions. (AP PhotoAndrew Medichini)

— The coronavirus pandemic pushed Australia’s economy into recession for the first time in 29 years in the first quarter of the year, and the situation is expected to get worse. Treasurer Josh Frydenberg said Wednesday the current June quarter will be the second in a row in which the Australian economy has contracted.

WHAT YOU NEED TO KNOW:

For most people, the coronavirus causes mild or moderate symptoms, such as fever and cough that clear up in two to three weeks. For some, especially older adults and people with existing health problems, it can cause more severe illness, including pneumonia and death. The vast majority of people recover. 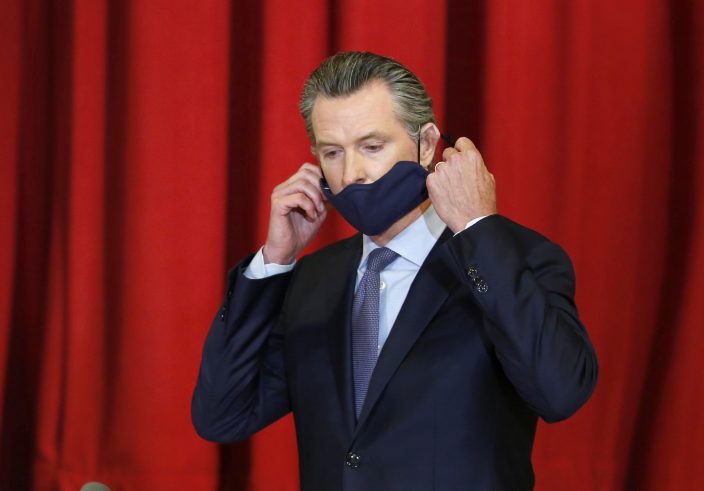 FILE - In this June 1, 2020 file photo, California Gov. Gavin Newsom takes off his face mask before news conference after meeting leaders of the African American community in Sacramento, Calif. A Chinese company paid by California to manufacturer hundreds of millions of protective masks missed a Sunday deadline for federal certification, marking the second times its shipments to the state will be delayed. (AP PhotoRich Pedroncelli, Pool, File)

Here are the symptoms of the virus compared with the common flu.

One of the best ways to prevent spread of the virus is washing your hands with soap and water. The U.S. Centers for Disease Control and Prevention recommends first washing with warm or cold water and then lathering soap for 20 seconds to get it on the backs of hands, between fingers and under fingernails before rinsing off.

You should wash your phone, too. Here’s how.

TRACKING THE VIRUS: Drill down and zoom in at the individual county level, and you can access numbers that will show you the situation where you are, and where loved ones or people you’re worried about live.

— 25: A Ukrainian soccer team has found 25 cases of the coronavirus among players and staff. The Ukrainian soccer association says the cases at Karpaty Lviv came from tests on 65 people. The team’s first game was canceled because of suspected virus cases and the league has now postponed two more matches.

— WUHAN TESTING: The central Chinese city of Wuhan has tested nearly every one of its 11 million people for the coronavirus in a mass effort that resulted in the isolation of 300 people, authorities said.

— BRITISH QUARANTINE: The British government is confirming plan s to impose a 14-day quarantine for people arriving in the country starting next week, despite pleas from the travel industry to drop the idea. Airlines and tour companies say the quarantine will derail plans to rebuild business.