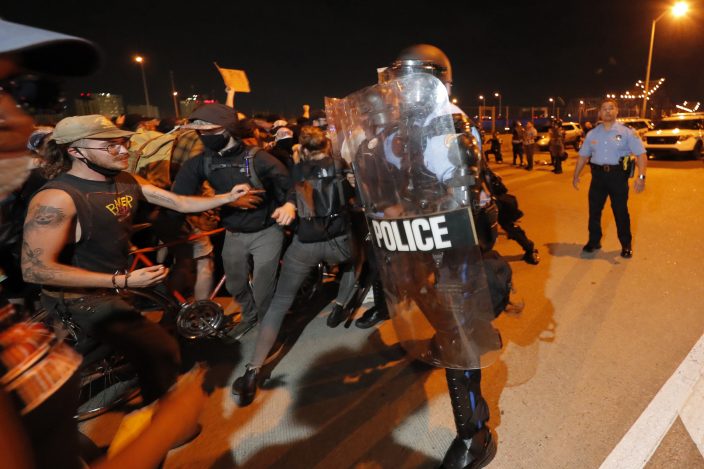 Protesters breach a line of police atop the Crescent City Connection bridge, which spans the Mississippi River in New Orleans, Wednesday, June 3, 2020, during a protest over the death of George Floyd, who died May 25 after being restrained by police in Minneapolis. (AP PhotoGerald Herbert)

CLERGY ABUSE-BISHOP ACCUSED — The Roman Catholic bishop of Brooklyn, New York, already under a church investigation for alleged sex abuse, has been accused by a second man of abuse in the 1970s, when the bishop was a parish priest in New Jersey. By Michael Rezendes. SENT: 990 words, photos. 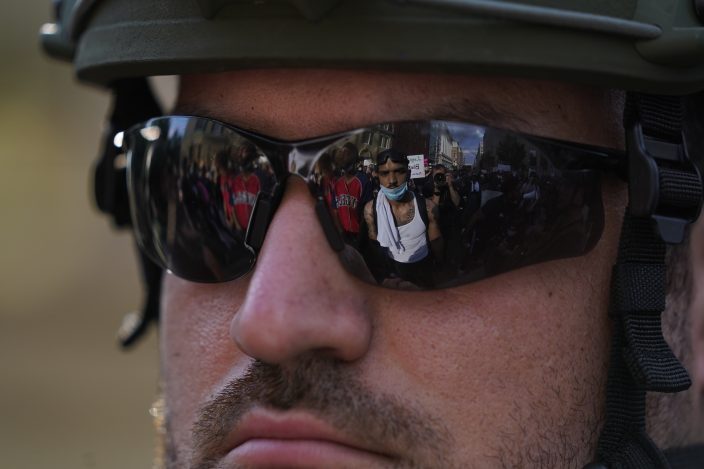 Demonstrators are seen reflected in the glasses of a law enforcement personnel, as they gather to protest the death of George Floyd, Wednesday, June 3, 2020, near the White House in Washington. Floyd died after being restrained by Minneapolis police officers. (AP PhotoEvan Vucci)

AMERICA PROTESTS — Demonstrations in cities across the U.S. condemning racism and police abuses after the death of George Floyd remain large but had turned notably more subdued on the eve of his memorial service while prosecutors charged three more police officers and filed a new, tougher charge against the officer at the center of the case. By Nomaan Merchant, Amy Forliti and Tim Sullivan. SENT: 1,070 words, photos, videos. With POLICE SHOOTING-BROOKLYN — Officer stabbed, two shot in Brooklyn, hours into NYC curfew; AMERICA PROTESTS-NYC — Floyd protests suppressed in NYC as police enforce curfew; AMERICA PROTESTS-THE LATEST. 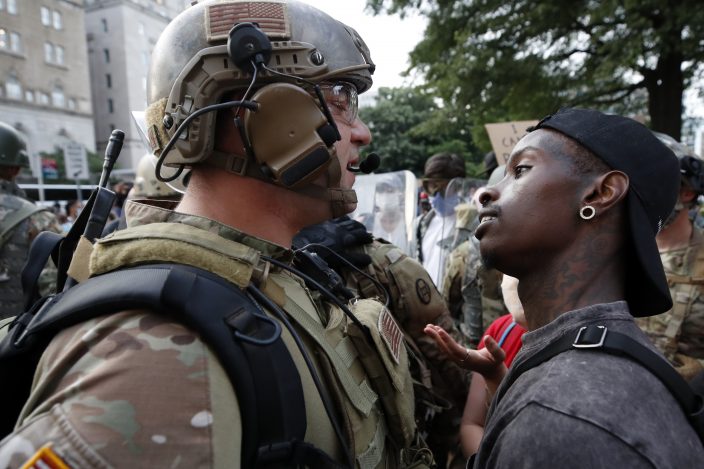 A demonstrator stares at a National Guard solider as protests continue over the death of George Floyd, Wednesday, June 3, 2020, near the White House in Washington. Floyd died after being restrained by Minneapolis police officers. (AP PhotoAlex Brandon)

AMERICA PROTESTS-EIGHT MINUTES — All protest movements have slogans. George Floyd’s has a number: 8:46 Eight minutes, 46 seconds is the length of time prosecutors say Floyd, a 46-year-old black man, was pinned to the ground under a white Minneapolis police officer’s knee before he died last week. By Kathleen Hennessey and Steve Leblanc. SENT: 760 words, photos.

AMERICA PROTESTS-COORDINATED THEFTS — Police in a small San Francisco Bay Area community were about to help authorities in neighboring Oakland keep the peace during a protest when a more pressing crisis hit home: groups of thieves had pillaged malls, set fire to a Walmart and stormed a car dealership. By the time San Leandro officers arrived at the Dodge dealership, dozens of cars were gone and thieves were peeling out of the lot in $100,000 Challenger Hellcat muscle cars. By Daisy Nguyen and Michael Tarm. SENT: 1,030 words, photos.

AMERICA PROTESTS-ARRESTS — More than 10,000 people have been arrested in protests decrying racism and police brutality in the wake of George Floyd’s death, according to an Associated Press tally of known arrests across the U.S. By Anita Snow. SENT: 630 words, photos. Also see MORE ON AMERICA PROTESTS below. 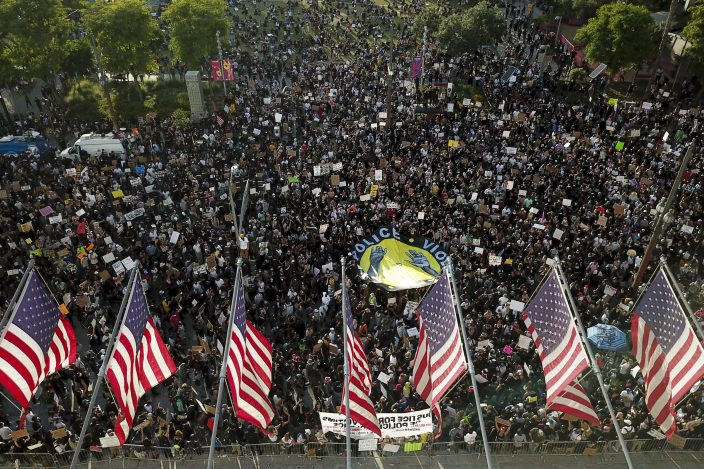 Demonstrators take part in a protest over the death of George Floyd who died May 25 after he was restrained by Minneapolis police, Wednesday, June 3, 2020, in downtown Los Angeles. (AP PhotoRingo H.W. Chiu)

VIRUS OUTBREAK-TRUMP — For weeks, President Donald Trump has been eager to publicly turn the page on the coronavirus pandemic. But now the White House fears that the very thing that finally shoved the virus off centerstage — mass protests over the death of George Floyd — may bring about its resurgence. By Jonathan Lemire and Zeke Miller. SENT: 1,050 words, photos.

VIRUS OUTBREAK-MUMBAI SLUM — There are no secrets in the tightly packed lanes of Dharavi, India’s largest slum. Everyone knows when an alcoholic husband turns violent, when children are scolded, or when a family has its television turned up too loud. So, news that someone had been hospitalized with the new coronavirus rocketed through the 1 square mile that is home to around a million of Mumbai’s poorest residents. By Yirmiyan Arthur. SENT: 770 words, photos. Also see MORE ON THE VIRUS OUTBREAK below.

Hundreds of demonstrators lie face down depicting George Floyd during his detention by police during a protest against police brutality, on Boston Common, on Wednesday, June 3, 2020. Demonstrators took to the streets around the United States again Wednesday to protest the death of George Floyd, a black man who was killed in police custody in Minneapolis on May 25. (AP PhotoSteven Senne) 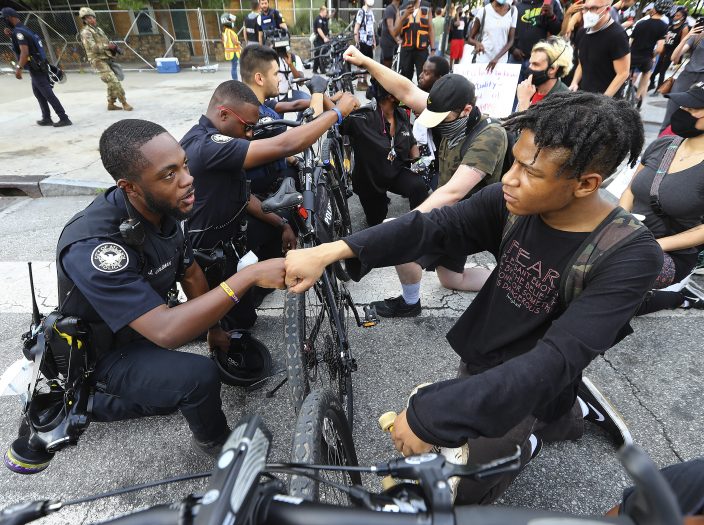 Atlanta Police Officer J. Coleman, left, and protester Elijah Raffington, of Sandy Springs, fist bump while an Atlanta Police bicycle unit blocking Marietta Street at Centennial Olympic Park Drive kneels down with protesters in a symbolic gesture of solidarity outside the CNN Center at Olympic Park, Wednesday, June 3, 2020, in Atlanta, during a protest sparked by the May 25 death of George Floyd in Minneapolis police custody. (Curtis ComptonAtlanta Journal-Constitution via AP)

AMERICA PROTESTS-CONGRESS — Democrats and the Congressional Black Caucus are preparing a sweeping new package of police reforms in the House and Senate in response to the death of George Floyd. By Congressional Correspondent Lisa Mascaro. SENT: 790 words, photo.

TRUMP-TEAR GAS-FACT CHECK — Trump and some of his supporters are claiming authorities did not use tear gas against people in a crackdown outside the White House this week. An AP Fact Check finds evidence that they did. By Calvin Woodward. SENT: 720 words, photos, video. 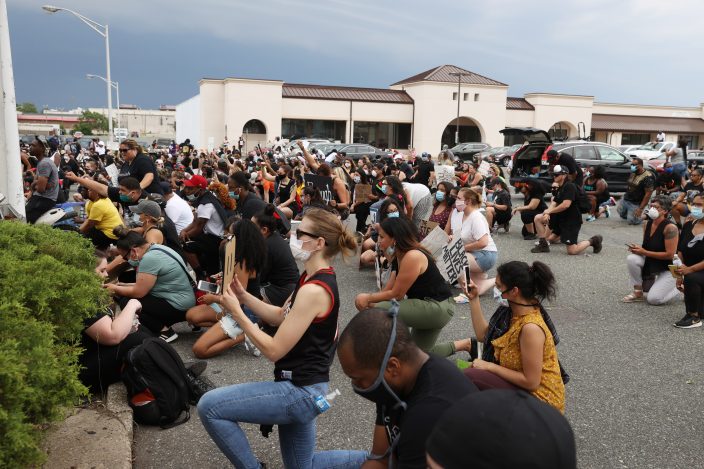 Protesters take part in March for Peace in response to the death of George Floyd in Vineland, N.J. Wednesday June 3, 2020. Floyd died after being restrained by Minneapolis police officers on May 25. (Edward LeaThe Press of Atlantic City via AP)

GEORGE FLOYD-MEMORIALS — The memorial services to honor George Floyd are extraordinary: three cities over six days, with a chance for mourners to pay their respects in the communities where he was born, grew up, and died. SENT: 670 words, photos.

GEORGE FLOYD-INVESTIGATION-AUTOPSY — A full autopsy of George Floyd, the handcuffed black man who died after being restrained by Minneapolis police, is released and provides several clinical details, including that Floyd had previously tested positive for COVID-19. SENT: 280 words, photo.

AMERICA-PROTESTS-CALIFORNIA — California authorities praise the thousands of peaceful protesters who thronged streets around the state while announcing criminal charges against more than 100 people accused of looting and violence, while police in the San Francisco Bay Area say a break-in suspect was killed when officers mistook his hammer for a gun. SENT: 950 words, photos. 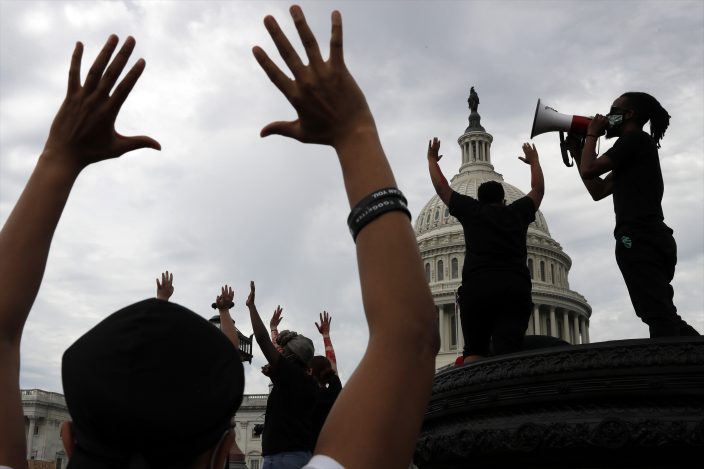 Demonstrators protest the death of George Floyd as they gather Wednesday, June 3, 2020, on the East side of the U.S. Capitol in Washington. Floyd died after being restrained by Minneapolis police officers.(AP PhotoJacquelyn Martin)

VIRUS-OUTBREAK-CLOGGED-SEWERS — Mayor Jim Kenney kicked off a recent briefing on Philadelphia’s coronavirus response with an unusual request for residents: Be careful what you flush. SENT: 970 words, photos, video. 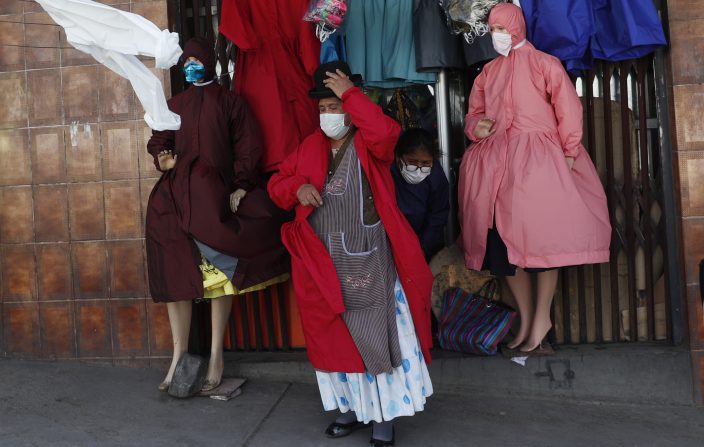 An Aymara woman tries on a frock at a store selling protective clothing suited for the dress style of Bolivian indigenous women from the highlands, amid the new coronavirus pandemic, in La Paz, Bolivia, Wednesday, June 3, 2020. (AP PhotoJuan Karita)

VIRUS OUTBREAK-ASIA — Canberra Airport opens a register for travelers interested in flying from the Australian capital to New Zealand on July 1 in a proposed resumption of international travel. SENT: 690 words, photos. 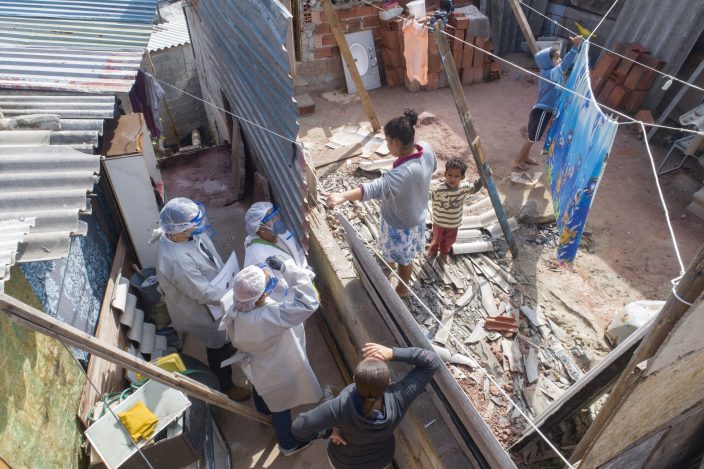 VIRUS-OUTBREAK-VEGAS-CASINOS — The casino coronavirus closure is ending, with cards to be dealt, dice to roll and slot jackpots to win again in Las Vegas and throughout Nevada. SENT: 590 words, photos.

VIRUS OUTBREAK-ITALY-ART LOVERS MOMENT — The Uffizi Galleries, the most-visited museum in Italy, is open after three months of COVID-19 lockdown, delighting art lovers who don’t have to jostle with throngs of tourists thanks to new social distancing rules. SENT: 530 words, photos.

VIRUS OUTBREAK-VIRAL QUESTIONS-EARS AND EYES — Can I get COVID-19 through my eyes or ears? It’s possible through the eyes, but not likely through the ears. SENT: 240 words, photo. 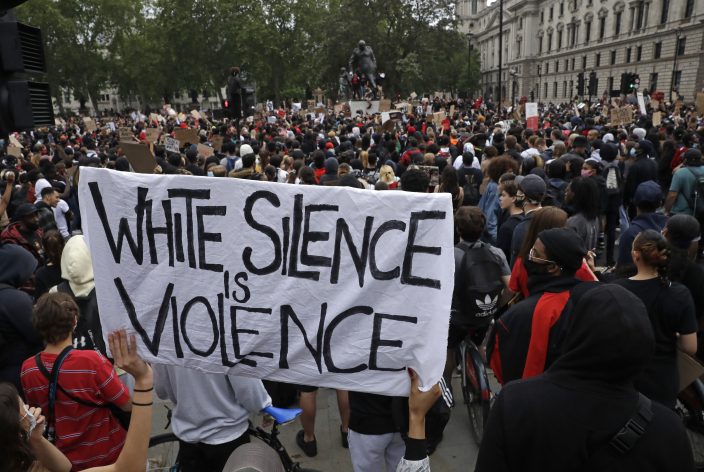 Protesters gather during a demonstration in Parliament Square in London on Wednesday, June 3, 2020, over the death of George Floyd, a black man who died after being restrained by Minneapolis police officers on May 25. Protests have taken place across America and internationally, after a white Minneapolis police officer pressed his knee against Floyd's neck while the handcuffed black man called out that he couldn't breathe. The officer, Derek Chauvin, has been fired and charged with murder. (AP PhotoMatt Dunham) 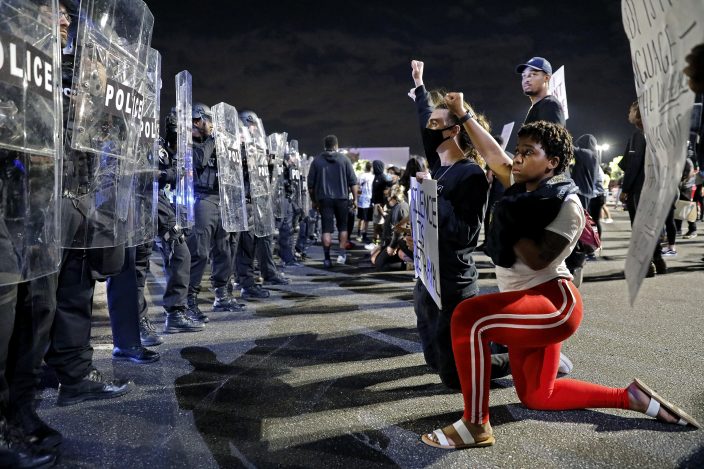 In this Tuesday, June 2, 2020 photo, a protester kneels before Hampton police officers at Peninsula Town Center in Hampton, Va., during a rally against police brutality sparked by the death of George Floyd, a black man who died after being restrained by Minneapolis police officers on May 25. Several individuals were arrested at the scene. (Jonathon GruenkeThe Virginian-Pilot via AP) 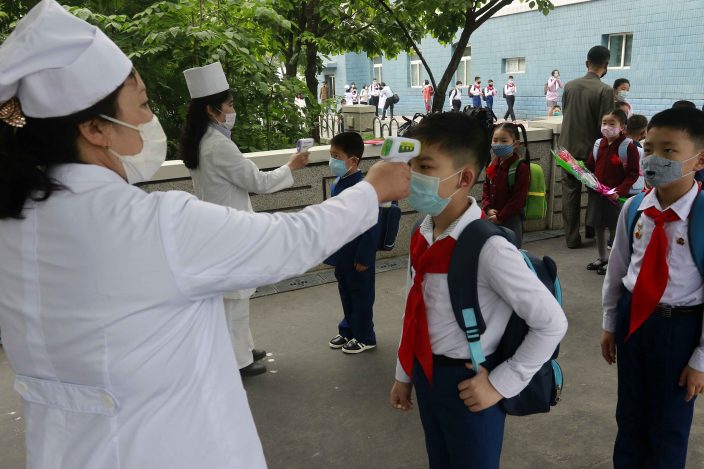 Kim Song Ju Primary school students have their temperatures checked before entering the school in Pyongyang, North Korea, Wednesday, June 3, 2020. All the schools in the country start their lessons this month after delays over concern about the new coronavirus. (AP PhotoJon Chol Jin) 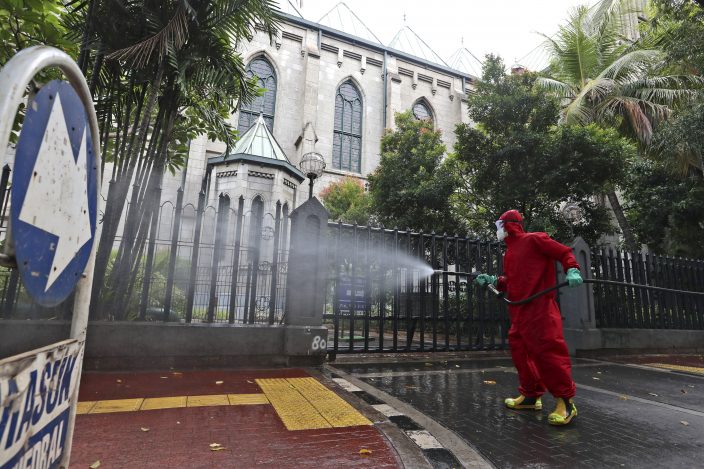 A fireman sprays disinfectant in an attempt to help curb the spread of the new coronavirus outbreak outside the cathedral in Jakarta, Indonesia, Wednesday, June 3, 2020. (AP PhotoAchmad Ibrahim)

ELECTION 2020-REPUBLICANS — The Republican Party faces a reckoning over some of its most divisive candidates. With REPUBLICANS-DEFENDING TRUMP — Trump photo op, talk of military force amp up GOP challenge. 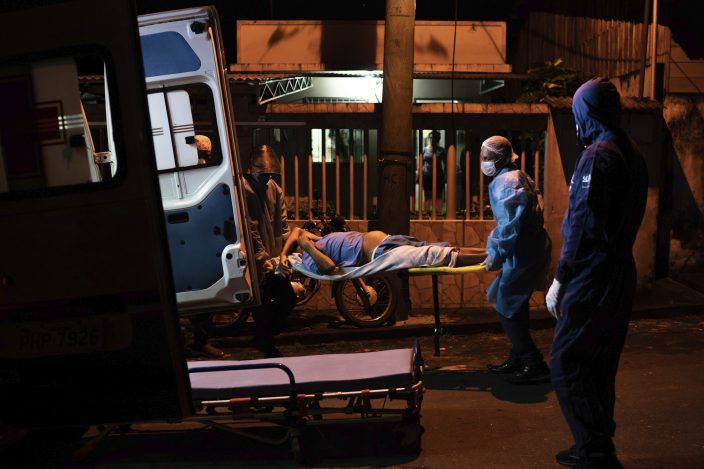 SUPREME COURT-TESTY JUSTICES — The Supreme Court’s most fought-over decisions often come in June, with dueling majority and dissenting opinions. But now, the court’s opinions are being posted online without an opportunity for dissenting justices to be heard. SENT: 870 words, photo.

SYRIA-ASSAD’S COUSIN — Syrian President Bashar Assad is seeking to strengthen his grip on his country’s war-wrecked economy, and he’s doing it by going after his close cousin. SENT: 1,050 words, photos.

KOREAS-TENSION — South Korea says it planned to push new laws to ban activists from flying anti-Pyongyang leaflets over the border after North Korea threatened to end an inter-Korean military agreement reached in 2018 to reduce tensions if Seoul fails to prevent the protests. SENT: 1,040 words, photos.

ISRAEL-ANNEXATION — Israeli Prime Minister Benjamin Netanyahu has harshly criticized Jewish West Bank settler leaders for disparaging Trump over what they perceive to be his less than adequate plan allowing Israel to annex parts of the West Bank. SENT: 420 words, photo.

HONG KONG-CHINA-NATIONAL ANTHEM — A Hong Kong legislative debate is suspended ahead of an expected vote on a contentious national anthem bill after pro-democracy lawmakers staged a protest. SENT: 360 words, photos.

GEORGIA CHASE-DEADLY SHOOTING — Three men who were charged with murder months after the fatal shooting of Ahmaud Arbery face a hearing before a Georgia judge following a week of angry protests in the U.S. over law enforcement biases against black victims. SENT: 430 words, photos.

CHINA-US-AIRLINES — Chinese regulators say more foreign airlines will be allowed to fly to China as anti-coronavirus controls ease but it was unclear whether the change will defuse a fresh conflict with the Trump administration over air travel. By Business Writer Joe McDonald. SENT: 550 words, photo.

BERRY’S PROTEST — U.S. Olympian Gwen Berry wants an apology from the U.S. Olympic and Paralympic Committee for publicly shaming her after she raised her fist in protest at the Pan-Am Games. By Sports Writers Eddie Pells and Pat Graham. SENT: 800 words, photos.

CMT-CELEBRATES-HEROES — Country stars highlight the heroic work of citizens and communities around the country who were coming together to help each other in the middle of the coronavirus epidemic during the “CMT Celebrates Our Heroes” TV special. By Entertainment Writer Kristin M. Hall. SENT: 440 words, photo.