The statue, which sits on state property, move to storage while Northam's administration works “with the community to determine its future,” the governor said at a news conference where the announcement was met with extended applause.

Northam made the decision after days of angry protests in Richmond and across the country over the death of George Floyd, a black man who died after a white police officer pressed a knee into his neck while he pleaded for air. 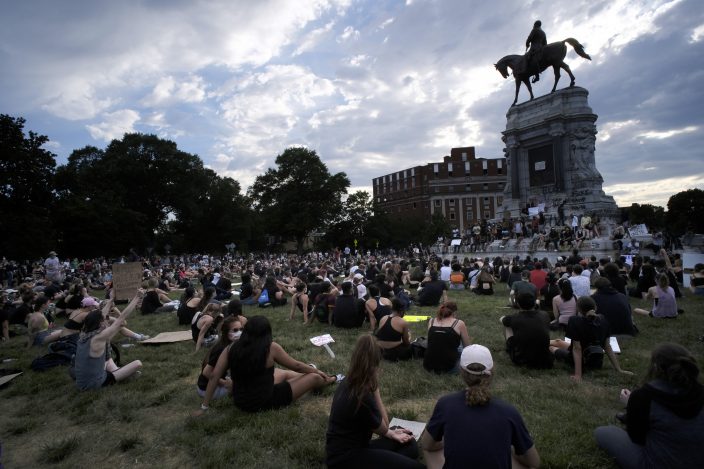 “You see, in Virginia, we no longer preach a false version of history. One that pretends the Civil War was about ‘state rights’ and not the evils of slavery. No one believes that any longer,” Northam said.

The decision came a day after Richmond's mayor, Levar Stoney, announced he will seek to remove the other four Confederate statues along Monument Avenue, a prestigious residential street and National Historic Landmark district.

Together, the decisions mark a striking departure from recent years when even after a violent rally of white supremacists descended on Charlottesville in 2017 and other Confederate monuments started falling around the country, Virginia did not make the same changes.

In part, local governments were hamstrung by a state law that protects memorials to war veterans. That law was amended earlier this year by the new Democratic majority at the statehouse and signed by Northam. When the changes go into effect July 1, localities will be able to decide the monuments' fate.

As for the Lee statue, Northam and his predecessor, fellow Democrat Terry McAuliffe, have not previously pressed the issue.

McAuliffe said in the aftermath of the Charlottesville rally, where a woman was killed after an avowed white supremacist drove a car into a crowd, that he lacked the authority to remove the statue without General Assembly approval. Some activists and attorneys, including staff of the American Civil Liberties Union of Virginia, disagreed.

Northam said earlier this year that he was still studying the issue.

The statues on Monument Avenue are among the most prominent collection of tributes to the Confederacy in the nation.

Northam noted the enormous size of the monument in his remarks Thursday.

“We put things on pedestals when we want people to look up,” he said. “Think about the message that this sends to people coming from around the world to visit the capital city of one of the largest states in our country. Or to young children.”

A statue of black tennis hero Arthur Ashe, a Richmond native, was erected on Monument Avenue in 1996.

The decision to remove the Lee monument has so far been widely praised by black lawmakers and activists, many of whom have long called for its removal.

“I’m pleased to see it removed. It’s disappointing it took so long,” said Del. Lamont Bagby, who represents Richmond and neighboring Henrico County in the General Assembly and is chairman of the Virginia Legislative Black Caucus. "The Lee statue was a constant reminder to Black Virginians of racism, dehumanization, and hate that exists and was prevalent throughout our history

A descendant of Lee, the Rev. Robert W. Lee IV, has also endorsed the monument's removal.

“Today is a day of justice not for my family but the families of countless enslaved persons who continually have fought for justice both long before and long after the Civil War,” Lee, who attended the governor's press conference, said in a statement. “Though I know the statue’s eventual promised removal won’t fix the issues we face it is a sign that sentiments and hearts are changing toward justice."

Northam's decision on the statue marks his most visible action so far to make good on his pledge to devote his term to promoting racial equity after a scandal over a racist photo that appeared on his medical school yearbook page nearly forced him from office last year.

Frustrated by the flow of coronavi ...

'A long time coming': Iconic Lee statue to be removed