North Korea on Friday threatened to permanently shut a liaison office with South Korea as it continued to condemn its rival for failing to prevent activists from sending anti-North Korean leaflets across the border.

The statement by North Korea’s ruling Workers’ Party came a day after the powerful sister of leader Kim Jong Un said the country would end a military agreement reached with South Korea in 2018 to reduce tensions if Seoul fails to stop the activists.

Kim Yo Jong also said North Korea could permanently shut the liaison office and a joint factory park in the border town of Kaesong, which have been symbols of reconciliation between the two countries. 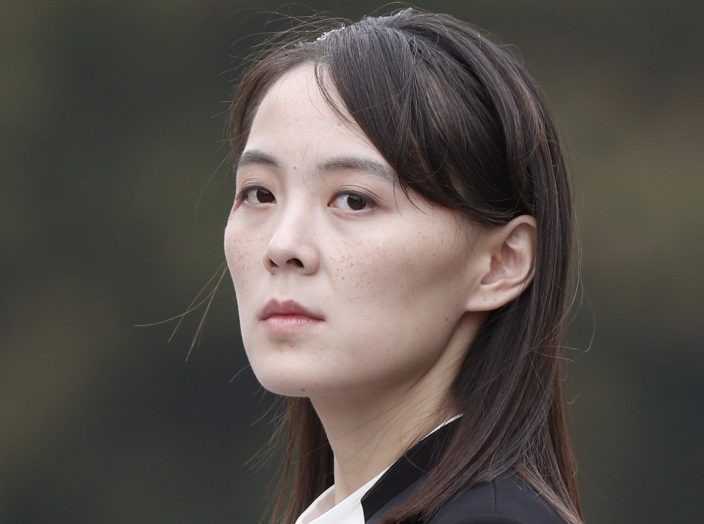 FILE - In this March 2, 2019, file photo, Kim Yo Jong, sister of North Korea's leader Kim Jong Un attends a wreath-laying ceremony at Ho Chi Minh Mausoleum in Hanoi, Vietnam. North Korea has threatened to end an inter-Korean military agreement reached in 2018 to reduce tensions if the South fails to prevent activists from flying anti-Pyongyang leaflets over the border. The powerful sister said Thursday, June 4, 2020, the North could permanently shut a liaison office with the South and an inter-Korean factory park in the border town of Kaesong, which have been major symbols of reconciliation between the rivals. (Jorge SilvaPool Photo via AP, File)

Desperate to keep alive a faltering diplomacy with North Korea, South Korea in response said it would push new laws to ban activists from flying leaflets by balloon to the North, which triggered a debate over freedom of speech.

But an unidentified spokesperson of the Workers’ Party’s inter-Korean affairs department said Seoul’s promise lacked sincerity and the scrapping of the liaison office will be the first in a series of North Korean steps that would cause “extreme fatigue” for the South.

The statement also confirmed an elevated status for Kim Yo Jong, who was described as her brother’s top official for inter-Korean affairs.

Under her instructions, North Korea has decided as a first step to “abolish the North-South liaison office that is occupying space in the Kaesong industrial complex while doing nothing," the statement said.

“We will not hide that we for a long time have considered decisive measures to completely shut down all spaces of contact with the South and fundamentally eliminate the sources of provocations from the South,” said the spokesperson of the party’s United Front Department.

“The latest events have strengthened our conclusion that an enemy is just an enemy ... it is our determination to go as far as we can in a vicious cycle of confrontation.”

South Korea’s government had no immediate reaction to the statement.

Sending balloons across the border has been a common activist tactic for years, but North Korea considers it an attack on its government. Defectors and other activists in recent weeks have used balloons to fly leaflets criticizing Kim Jong Un over his nuclear ambitions and dismal human rights record.

While Seoul has sometimes sent police officers to block such activities during sensitive times, it had previously resisted North Korea’s calls to fully ban them, saying the activists were exercising their freedom.

The liaison office in Kaesong was one of the main agreements reached in three summits between Kim Jong Un and South Korean President Moon Jae-in in 2018. It has been closed since late January after the Koreas agreed to temporarily shut it until the coronavirus is controlled.

Kaesong is also the location of a now-shuttered factory complex that was jointly run by the two Koreas. It combined South Korean capital and technology with cheap North Korean labor. Seoul’s previous conservative government shut it down in 2016 following a North Korean nuclear test, removing a crucial cash source for North Korea's struggling economy.

During their summits in 2018, Kim and Moon issued vaguely worded statements pledging denuclearization and peace. They also agreed to the military pact aimed at reducing conventional threats and vowed to resume operations at the Kaesong factory park and South Korean tours to a resort at North Korea's Diamond Mountain when possible, expressing optimism that U.S.-led sanctions on the North would end.

But North Korea has suspended virtually all cooperation with South Korea in recent months amid a stalemate in larger nuclear negotiations with the Trump administration, which have faltered over disagreements on sanctions relief in exchange for disarmament steps.

North Korea has sped up its missile tests while also pressuring Seoul to break away from Washington and restart joint economic projects held back by the sanctions over its nuclear program.