A group of Georgia lawmakers called Friday for the legislature to quickly scrap the state's 19th-century citizen arrest law, which one prosecutor cited in a controversial legal opinion justifying the pursuit and killing of Ahmaud Arbery.

Democratic Rep. Carl Gilliard of Savannah told a news conference Friday the proposal will be introduced when the state House and Senate reconvene next week following a three-month recess forced by the coronavirus pandemic. Two Republicans have agreed to co-sponsor the bill.

Arbery was fatally shot Feb. 23 after a white father and son armed themselves and pursued the 25-year-old black man as he ran through their neighborhood outside the port city of Brunswick. Greg McMichael told police he suspected Arbery had committed prior break-ins in the area. More than two months passed before McMichael, his son Travis McMichael, and a neighbor who joined the chase, William “Roddie” Bryan Jr., were charged with felony murder. 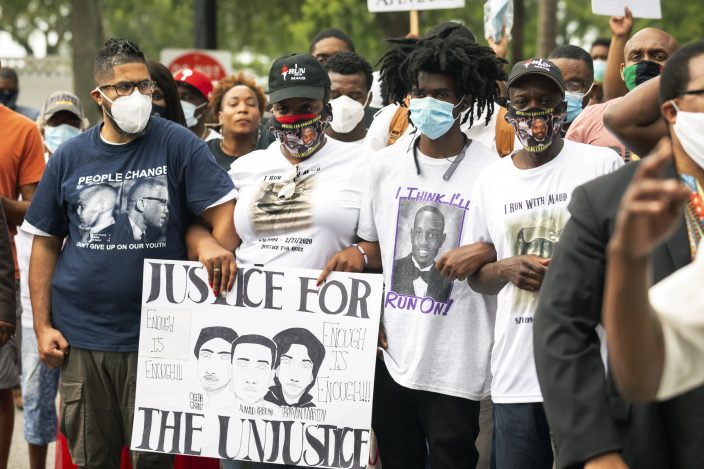 FILE- In this May 16, 2020, file photo, Ahmaud Arbery's aunt Theawanza Brooks, center left, joins other family members and supporters in a march from the Glynn County Courthouse to a police station after a rally to protest the shooting of Arbery, in Brunswick, Ga. Arbery was shot and killed in February by two men who told police they thought he was a burglar. (AP PhotoStephen B. Morton, File)

The first prosecutor assigned to the case, Waycross Circuit District Attorney George Barnhill, concluded in an April letter to police that the three men were legally justified “to stop and hold" Arbery as a "criminal suspect until law enforcement arrived.” Barnhill also said it was his legal opinion that Travis McMichael shot Arbery in self-defense. Barnhill offered those opinions as he recused himself from the case because his son worked with Greg McMichael in the Brunswick district attorney's office.

Passed in 1863, the Georgia law allows ordinary citizens to arrest suspected felons “upon reasonable and probable grounds of suspicion.”

Georgia Bureau of Investigation, which took over the case from local police in early May, rejected the idea that the three men were attempting a legal citizen arrest or acting in self-defense when Arbery was killed. GBI agent Richard Dial testified in court Thursday there's no evidence Arbery committed crimes in the subdivision where he was shot.

"The problem we’re trying to fix is this notion that you can initiate confrontation and aggression in a killing and then stand behind the law,” said Rep. Bob Trammel of Luthersville, the Democratic leader in the state House.

Trammel said repealing the citizen arrest law will be among a package of criminal justice proposals Democrats plan to introduce next week. Another would scrap Georgia's stand-your-ground law that says a person being threatened can legally use force without first trying to retreat.

However, time and legislative procedure will likely make it tough for any new proposals to win approval this year. Only 11 days remain in the 40-day session and the deadline for bills to pass at least one of the two legislative chambers has passed.

Republican House Speaker David Ralston is open to discussing changes, spokesman Kaleb McMichen said. But he added: “These would be two complex measures in their own right, however, and likely require lengthy discussion."

Odds seem more favorable for Georgia to pass a hate crimes statute in the final days of the 2020 session. It's one of just four U.S. states without such a law, according to the Justice Department.

The House last year passed a bill that would impose additional penalties for crimes motivated by the victim's race, religion, sexual orientation, gender or other factors — and Ralston has now declared it a priority. The measure remains stalled in a Senate committee.

McMichen said Ralston wants a hate crimes bill sent to Gov. Brian Kemp “with no delay and no amendment.”

Republican Lt. Gov. Geoff Duncan, who presides over the state Senate, said in a statement Friday that “Georgians will not stand for hate and violence.” As for the hate crimes proposal, he said: “This is an important piece of legislation to get right.”

Parts of Japan still searching for ...

Late Seoul mayor says in his will he feels sorry to peo ...

A will left by late Seoul Mayor Pa ...