Indianapolis’ police chief said Friday that his department is taking a look at officers’ training for responding to heated public protests while it investigates four officers caught on video using batons and pepper balls to subdue two women at a protest last weekend over the death of George Floyd.

Chief Randal Taylor said the four officers involved in Sunday night's incident have been reassigned to support duties and will have no contact with the public as the Indianapolis Metropolitan Police Department conducts an internal investigation.

Taylor, who announced that probe Monday, said he hoped to have some results next week, and said officials are looking at whether the officers' conduct was “reasonable.” He said the actions he saw on the video were worrisome. 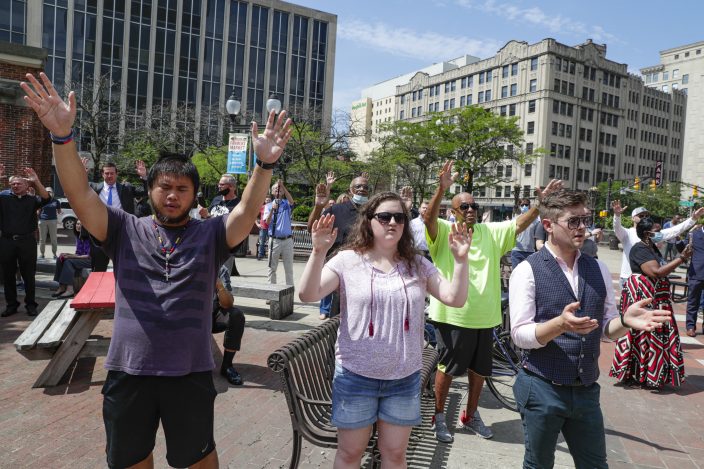 People raise their hands in prayer during a prayer service in Indianapolis, Wednesday, June 3, 2020. Elected officials, community leaders and religious leaders gathered to pray for the city. Protester as expected to gather for the sixth straight night in Indianapolis since the death of George Floyd, a black man who was died in police custody May 25 in Minneapolis. (AP PhotoMichael Conroy)

“I can promise that regardless of the outcome of that investigation we will be looking at a retrain for that kind of scenario. I don’t like what I saw, but I don’t have all the details yet either,” Taylor said at a news conference.

“I think we have to look at the training scenario that looks at what happened there to see if there would be a different response.”

The video recorded by WISH-TV shows a black woman who was being held from behind by a white, male officer escaping his grasp and then being surrounded by several other officers. There are audible pops heard and the video shows several clouds of spray near the woman that are believed to have been caused by detonated pepper balls. Two officers strike her with batons until she falls to the ground, and she is then pinned face-down by a baton at the back of her neck. 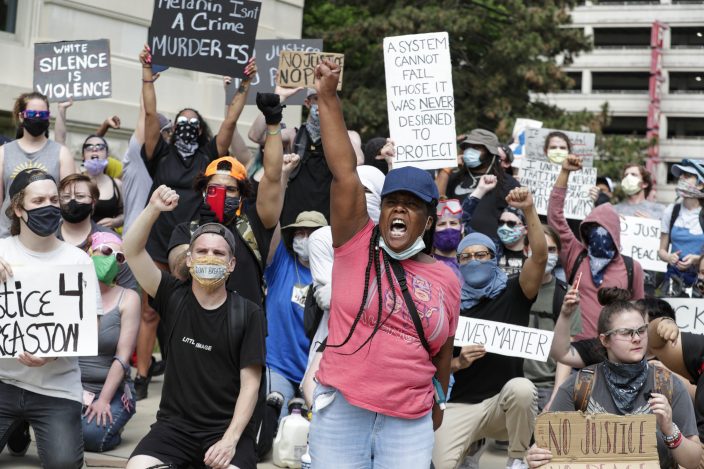 A women leads a chant as protesters took a knee at the Indiana Statehouse in Indianapolis, Monday, June 1, 2020 over the death of George Floyd, a black man who was in police custody in Minneapolis. Floyd died after being restrained by Minneapolis police officers on Memorial Day. (AP PhotoMichael Conroy)

A second woman, who is white, is seen and heard shouting, “Why her? Why her?” Another officer rushes the second woman and shoves her to the ground, where officers subdued her.

The video does not show the events that preceded the incident. It happened during one of numerous demonstrations in Indianapolis that were part of the nationwide protests against the killing of Floyd, a handcuffed black man who died May 25 after a white Minneapolis police officer used his knee to pin down Floyd's neck for several minutes as Floyd pleaded for air and eventually stopped moving.

Deputy Chief Kendale Adams said at Friday's news conference that police would like to speak to “the young lady in the video" to get her account. 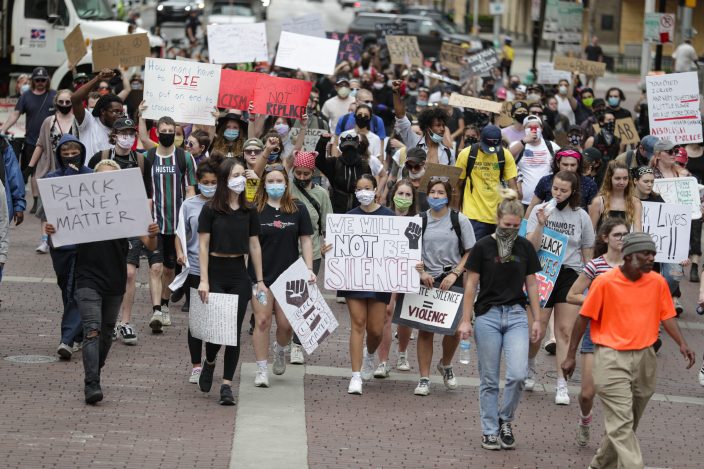 Protesters march in the streets of downtown Indianapolis, Monday, June 1, 2020 over the death of George Floyd, a black man who was in police custody in Minneapolis. Floyd died after being restrained by Minneapolis police officers on Memorial Day. (AP PhotoMichael Conroy)

“That would be very beneficial in this investigation," he said.

Mayor Joe Hogsett said he found the video troubling, adding, “I don’t think there’s anyone that should be able to watch that video and not be moved to emotion."

Hogsett also released details from a proposed revision of the department’s use-of-force policy drafted by Taylor at Hogsett's request last month. Those changes include adopting California’s standards for use of deadly force, explicitly prohibiting chokeholds by officers, and a renewed focus on police training to deescalate potentially volatile situations. 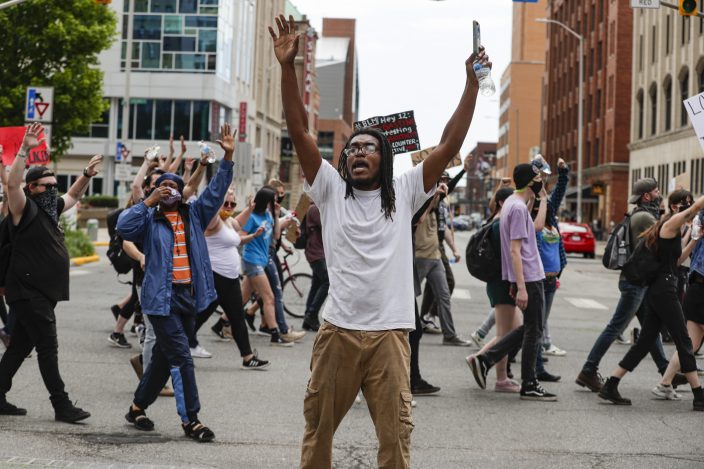 Protesters march in the streets of downtown Indianapolis, Monday, June 1, 2020, over the death of George Floyd who died after being restrained by Minneapolis police officers on May 25. (AP PhotoMichael Conroy)

During last weekend's unrest in Indianapolis, crowds smashed windows in dozens of downtown office buildings, restaurants and storefronts and set a fire that damaged a pharmacy.

Hogsett has imposed overnight curfews for Friday and Saturday nights. The city's streets have been generally calm since Sunday.

Hogsett's office announced Friday that the police force “will continue to engage residents with an education first approach" before making any arrests of protesters violating the curfew.

Hogsett said those protesters “should be applauded for their commitment and advocacy and it is my hope that the curfew will ensure the types of peaceful evenings we have experienced over the last several days."