Shigeru Yokota, a Japanese campaigner for the return of his daughter and more than a dozen others who were abducted to North Korea in the 1970s, has died. He was 87.

His family said Yokota died of natural causes in a hospital in Kawasaki, near Tokyo, on Friday, before he was able to meet his daughter again.

“My husband and I did our best together, but he passed before seeing Megumi again. Now I'm at a loss,” his wife Sakie, 84, said in a statement.

FILE - In this Nov. 15, 2004, file photo, Shigeru Yokota pauses as he and his wife Sakie speak during a press conference by families of the abduction victims in Tokyo after an urn containing the cremated remains of their daughter Megumi brought back from Pyongyang by Japanese officials. Shigeru Yokota died of natural causes before he was able to meet his daughter again, his group said Friday, June 5, 2020. He was 87. (AP PhotoKoji Sasahara, File)

Megumi disappeared in 1977 on her way home from her a junior high school in Niigata on Japan's northern coast when she was 13. It was the day after she gave her father a comb as a birthday gift, a memento he always carried with him.

A former Central Bank official, Yokota, and his wife kept looking for Megumi and found out 20 years later that she had been abducted to North Korea by its agents.

In 1997, Yokota founded a group with other abduction victims' families and headed it for a decade. The smiling and soft-spoken Yokota became the face of the campaign that eventually gained government backing.

FILE - In this March 24, 2014, file photo, Shigeru Yokota, the father of Megumi Yokota who was abducted by North Korea in 1977, speaks as his wife Sakie listens during a news conference at the Foreign Correspondents' Club of Japan in Tokyo. Shigeru Yokota died of natural causes before he was able to meet his daughter again, his group said Friday, June 5, 2020. He was 87. (AP PhotoShizuo Kambayashi, File)

The Yokotas had traveled around Japan carrying their daughter's photos. An image of an innocent-looking teenager in a school uniform became a rallying cry for their cause.

After years of denial, North Korea in 2002 acknowledged abducting 13 Japanese. Japan maintains that the North abducted at least 17 people to train agents in Japanese language and culture to spy on rival South Korea.

Five of the abductees were allowed to return home for a visit later that year and have since stayed. North Korea says eight others, including Megumi, had died and denies that the other four entered its territory. Their families and the Japanese government disagree. 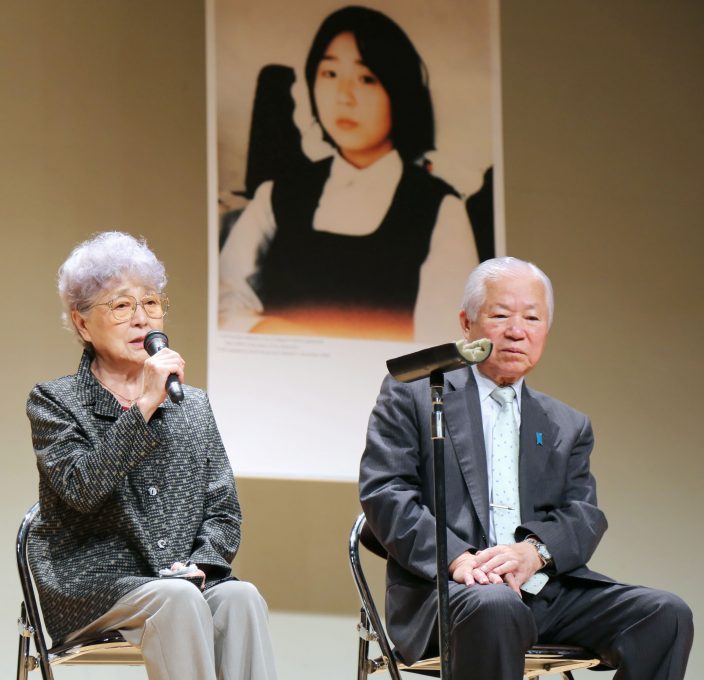 Shigeru Yokota listens to his wife Sakie, the parents of Megumi Yokota who was abducted by North Korea in 1977, during a meeting in front of Megumi's photo, in Niigata, Japan in September, 2014. Shigeru Yokota died of natural causes before he was able to meet his daughter again, his group said Friday, June 5, 2020. He was 87. (Kyodo News via AP)

North Korea sent samples of what it said were Megumi's ashes but DNA examination by the Japanese government showed they were not hers and were mixed with non-human remains.

In 2014, the Yokotas traveled to Mongolia to meet a daughter Megumi gave birth to in North Korea, but Megumi was not there.

Japan and North Korea have no diplomatic ties, and efforts to resolve the abductions have since largely stalled. Many elderly relatives say they’re running out of time to see their loved ones.

Yokota stepped down as the group's leader in 2007 due to declining health, though he continued to make public appearances though did not speak in public for the last four years.

“I'm filled with regret and sadness that we haven't been able to bring (Megumi) back," Japanese Prime Minister Shinzo Abe told reporters Friday. He renewed his pledge to bring the abductees home.

Chief Justice Roberts recently spent a night in a hospi ...

Would-be travelers in Taiwan live out dreams of flying ...